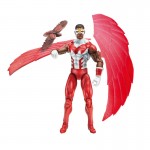 There is a story behind why I started this site.  I was in a Target one day looking for the new Wave 14 of the Marvel Universe line and I found the one I was anticipating the most…the Falcon.  I easily found the Falcon action figure…but nothing else in that wave, not even a repainted Dr. Doom which was also in that wave.  I was like, how could people pass up this cool ass figure?

In later months, I was a little sad to see that Falcon had become one of the inevitable “peg warmers”.  I was finding him everywhere.  I couldn’t believe that people were not appreciating this figure.  Now I don’t want to be naive and say it was because he was Black.  But when kids come in looking for an action figure for their parents to buy and are presented with a Falcon figure, a Hulk, and a Captain America, nine times out of ten, I bet they choose the Hulk or Captain America figure (even the Black kids).

So anyway, this prompted me to want to review and preview the Black action figures out there.  But I’m not close minded.  I love all action figures, and will occasionally throw in some of the more anticipated figures.  I’ll take a look at what’s to come and will post my store findings.  I’ll even throw in some comic book reviews when I get a chance!

So sit back, relax, and enjoy the site.  Post comments when and where appropriate.  I highly value your opinion.  No ignorance will be tolerated.  As the site grows, I would love to get a forum going and other additions.

Thank you and enjoy the site!
ThaMENACING1