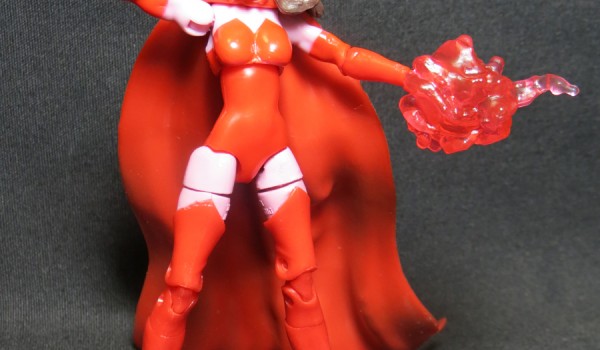 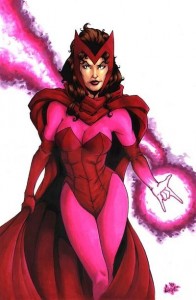 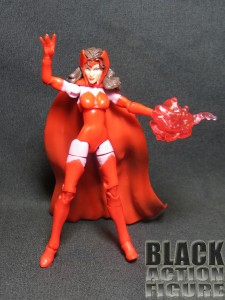 Back again, and this time we’re checking out Scarlet Witch from Marvel Universe Wave 19.  Scarlet Witch has been one of those characters whose been dogged out constantly by Marvel over the years.  A few years ago she single-handedly almost wiped out the entire mutant population of the Marvel Universe (with multiverse implications as well).  They then made her disappear for a few years only to come back recently thanks to the Young Avengers and Doctor Doom (looooonnng story.  So damn long, it took them two years to write it apparently).

At any rate, Hasbro has come with another strong wave of figures featuring not one but two female figures.  They’ve only done it twice before…Wave 12 with Spider-Woman and a repaint Ms. Marvel and then Wave 17 with Storm and Psylocke.  So how does Scarlet Witch measure up to the rest of the figures in the Marvel Universe line?  Check out the review after the break… 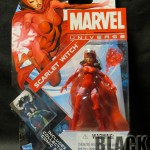 The packaging is pretty standard Marvel Universe with great artwork on the front and bio and preview of other figures in the wave on the back.  The other figures on the back include Kang, the Punisher, and She-Hulk, all to be reviewed soon. 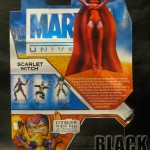 To note, the featured character on the back with the word bubble urging us to “Collect Them All” is none other than the Mental Organism Designed Only for Killing himself, M.O.D.O.K.  Hopefully, this signifies that Hasbro is working on a M.O.D.O.K. figure soon, as my only representation of him in my collection is a lead statue.

The only gripe I have about the packaging is one that is common with most action figures.  They tease us on the back of the card with the great prototype, but our actual figure is sometimes subpar in comparison.  They didn’t do too bad this time, but there is definitely a small discrepancy between prototype and actual product.
Score: 9.0/10 (Teasing us with a superior prototype is not right) 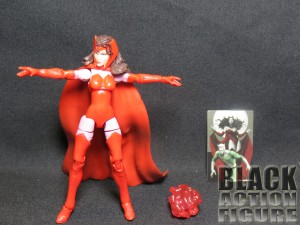 Again, Hasbro is very minimalistic when it comes to including accessories with their figures.  I almost wish I reviewed the Punisher first just to say that these figures come with something!

Fortunately, the Scarlet Witch figure does come with a repurposed energy ball (a few characters have this same accessory) that can fit on either hand to signify her “hex” mutant power.  This figure also comes with another lame collectible card.  I honestly don’t know where I put my other cards since they’ve been doing this and I think my dog has been chewing them up.  Again, I have to ask (beg) that Hasbro please bring back the action figure stand.
Score:  5.0/10 (They do manage to give us something, but not much)

First, I would like to reiterate that the prototype on the back of the card is definitely the better sculpt.  It looks more like the fictional comic book character. 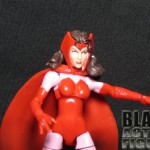 The actual figure actually looks a little more ethnic, which is fine given the character’s Romany/Jewish background.  While originally put off by the sculpting of the face, I have eventually given in and believe that this turned out to be a good figure.

I’m not into which “body” an action figure is using, but Hasbro used the same body type for their female figures for so long that is easy to recognize and appreciate a new one.  With that being said, Scarlet Witch may be using a similar body type to the newer figure X-23.  This actually fits better than the what has been used in the past.

The paint job is pretty good down to the eyes, lips, and eyebrows.  Other than her hair and face, she is basically just two different colors.  The likeness is pretty accurate as well, although they did choose to go with thigh-high boots which is sort of uncommon in her costume.  She is normally drawn with leggings and regular sized boots, although sometimes it is left up to artist interpretation.
Score: 7.0/10 (Not as good as the prototype, but definitely more pluses than minuses)

Depending how you count, this figure has over 25 points of articulation, and that’s without a waist swivel. This new female body sculpt has more articulation than normal figures allowing the Scarlet Witch to be placed in a myriad of different poses. 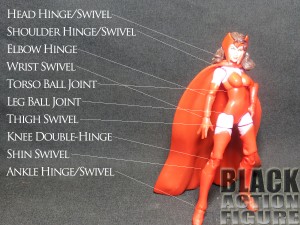 Although her head is on a ball joint, Hasbro added a hinge to her head for more movement since her hair restricts a lot of it.  The cape can also be a little cumbersome, especially when trying to pose her in different positions.  Somehow, the addition of waist articulation would have taken away from the look of the figure, so Hasbro wisely left it off.
Score: 8.0/10 (Great articulation but head and neck have minimal movement)

The Marvel Universe action figure line is definitely in need of more female characters, although female characters at one point in time used to be considered “taboo” in a BOYS action figure line.  Thankfully, that type of sexist thinking has died down dramatically and some of Hasbro’s best “chase” figures are female: Sif from the Thor line, Maria Hill (SDCC Exclusive), Black Widow, and now Scarlet Witch.  This figure unfortunately only comes one per case.  While this drives the collectibility of some figures, it annoys collectors who aren’t able to get their hands on it easily.  It also drives up the scalper market.  So if you’re a Marvel Universe collector, be sure to keep a lookout for this figure.  And if you get an extra one, be sure to help out your fellow collector and offer it to them at cost.  That way, we can all reasonably enjoy this hobby without feeling like we’re putting all of our money into it.  I’m getting off my soapbox now…

(Just a closing note, I know Scarlet Witch is not Black, like my wife so deftly pointed out…but I review all action figures, and I want to make sure to get the newer ones reviewed on my site as well) 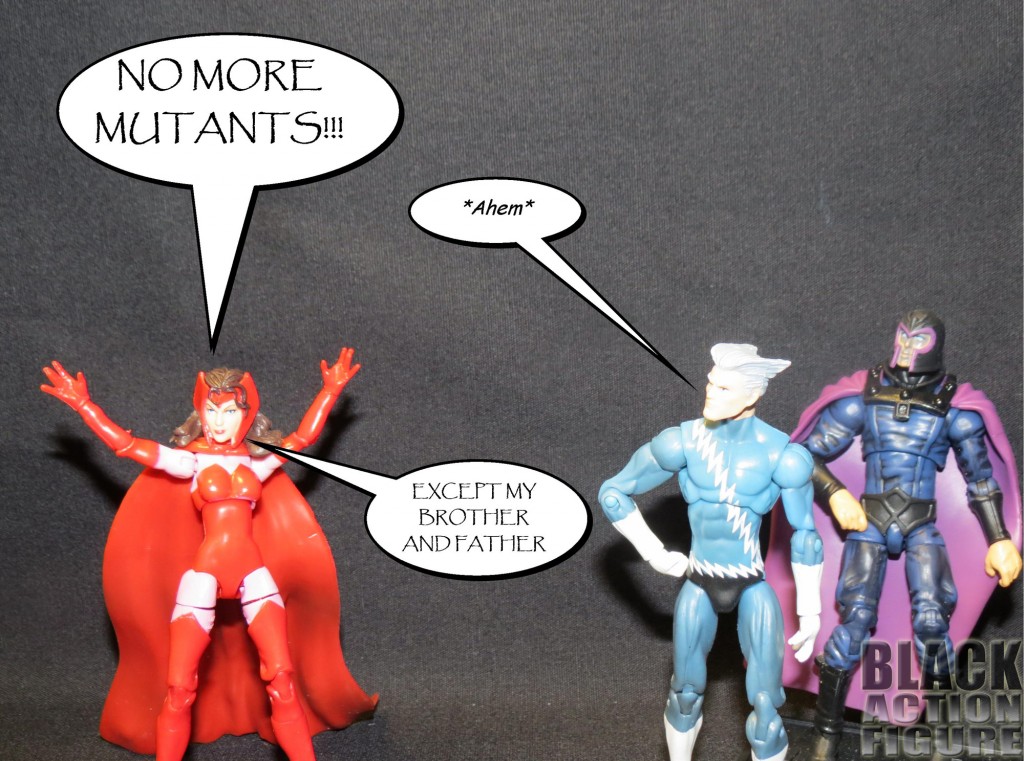 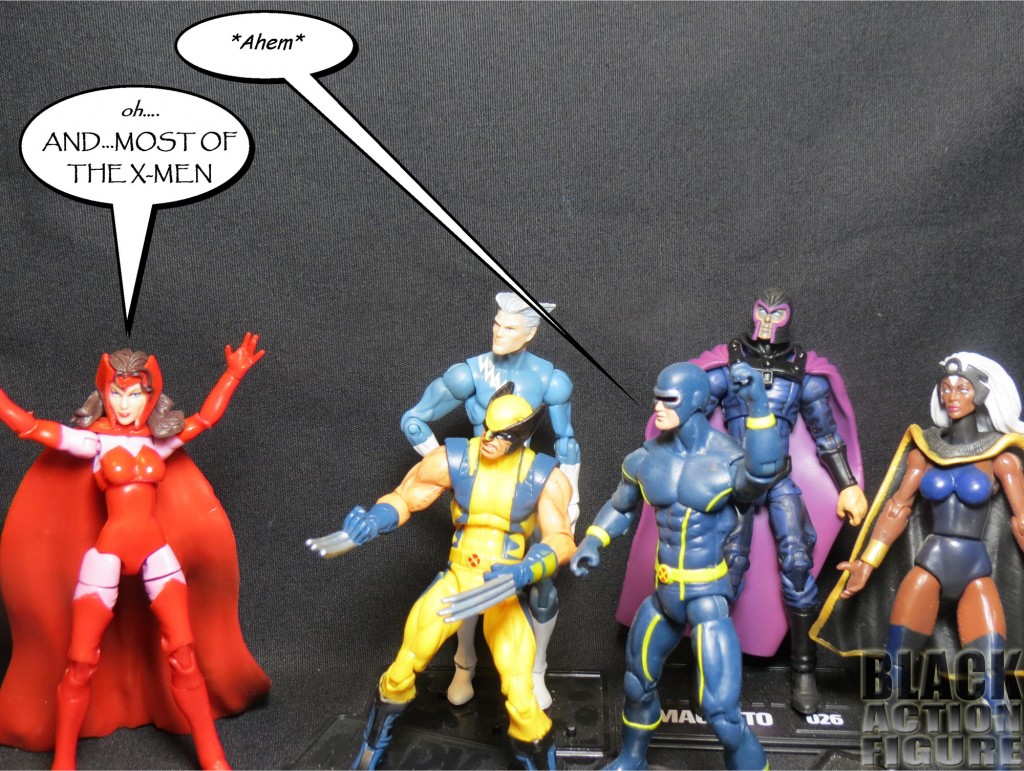 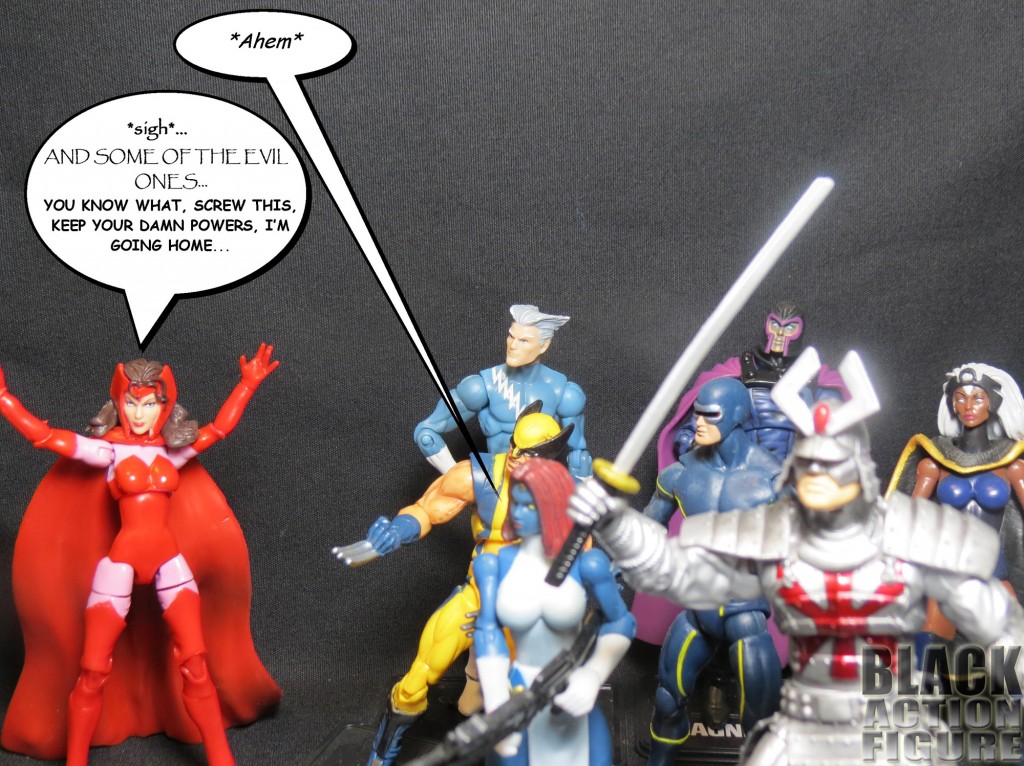 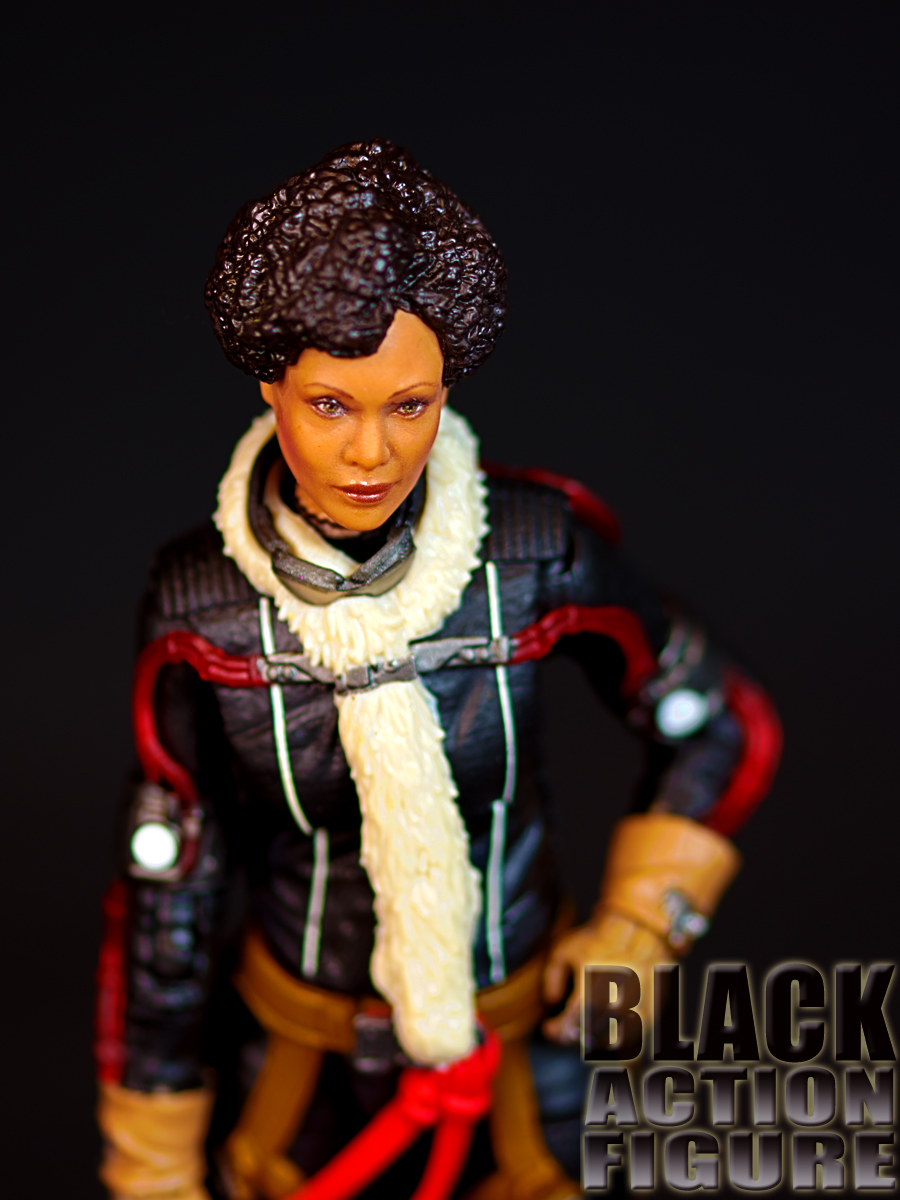