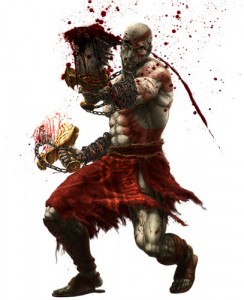 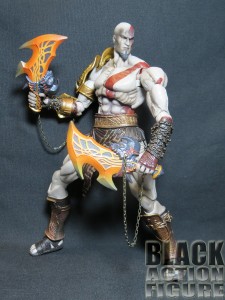 I finally took a plunge and opened my first Square-Enix Play Arts Kai action figure.  I’ve always wanted to open one of these things up because they are so damn cool!  It wasn’t until I opened this up that I realized that this was not the first time I have opened a Play Arts Kai action figure.  My first figure was Sephiroth from Final Fantasy VII that was gifted to me years ago.  I remember taking that bad boy out the package and admiring the sculpting, detail, and articulation of the figure.

I get to relive that feeling with another video game icon.  This time around, it is Kratos from the God of War series on the Playstation.  Let me tell you up front…Square-Enix does not disappoint.  Join me after the break to check out this video game legend turned action figure. 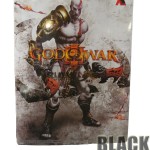 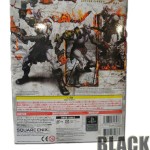 Packaging
So this figure and all the Play Arts figures come in a beautifully decorated display box.  This figure was personalized with a God of War III design.  On the front, we get a picture of the figure along with an epic Greco-Marble-Coliseum design scheme.

On the back, we have the action figure posed three different ways along with information and warnings in both English and Japanese. 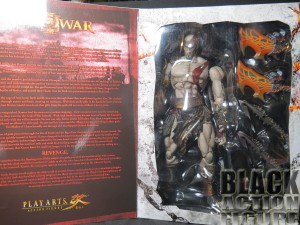 The real surprise comes when you open up the velcro-closed front cover (like you’re opening a book).  You not only get to see the actual figure and his accessories beautifully displayed on the right, on the inside of the cover, you get a detailed story and bio of Kratos and his trials with the Greek gods.

The packaging to me is superb.  You can display the figure in or out of the packaging.  The good thing is that if you keep the packaging, you have a choice of placing the figure back in the packaging if you ever want to switch up or need to travel with the figure packed away safely.  To me, this is smart packaging for your 9″+ figures and should be adopted by more manufacturers.
Score: 10/10 (Smart packaging, reusable, definitely compliments figure) 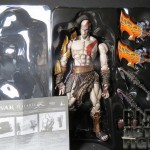 Accessories
Accessories are definitely another plus with this action figure.  Kratos comes with his two original swords along with chains to connect them, and two new swords that he uses in God of War III.  He also comes with an extra set of hands that are used to hold those swords (his original hands are in a dramatic open pose).  This figure also comes with a set of instructions if needed. 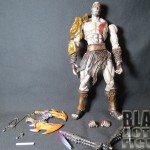 The only thing I thought this figure could have come with is a stand.  My Play Arts Kai Sephiroth figure came with a stand…but then again, it is hard for that figure to stand on his own.  With some manipulation, Kratos is able to stand on his own, but a stand of some type would have made it easier to pose him in his action poses.
Score: 9.0/10 (with a premium figure, comes premium accessories!)

Sculpt/Likeness
This line of figures from Play Arts Kai have no equal at this level.  I always felt like this line was a step above the NECA figures (NECA also had the God of War license) while the next level up from here would be the Sideshow Collectibles Hot Toys figures.  Since the Sideshow figures are way out of my price range, I am more than happy to have this figure. 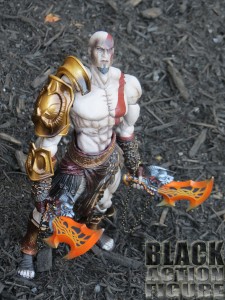 I say this a lot when I have a great sculpt, but this figure really does look like he just stepped out of the video game.  Considering there are companies out there who would like to pass off crappy likenesses of video game characters (Jazwares is a huge offender of this), Square-Enix has gone out of there way to pay attention to detail.  Their other lines like Metal Gear Solid and Batman Arkham Asylum proves that detail is key when producing these premium figures.

If I have one complaint, it would be that some of the joints seem overly-extended and thus draw attention to themselves.  But that might just be me.  Otherwise, excellent likeness, great sculpting, and beautiful paint application on the figure and the accessories.
Score:  9.5/10 (Near flawless sculpt and likeness, although noticeable joints) 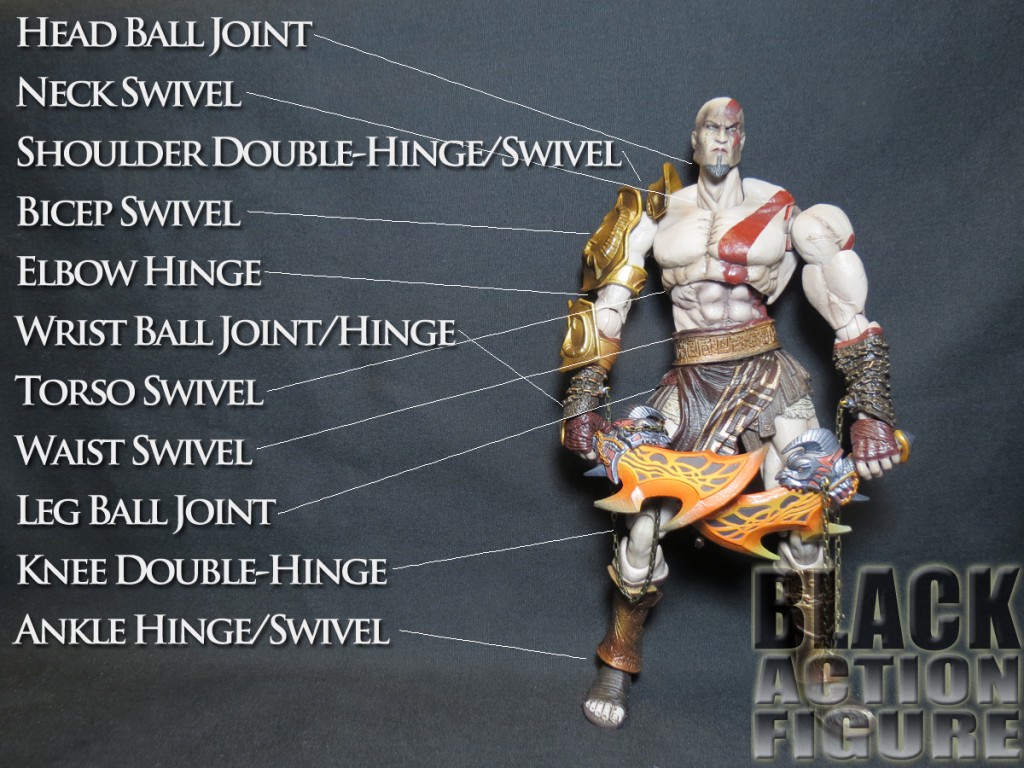 Some notable points on this figures articulation include slightly movable neck and double-hinge shoulders.  With the double-hinged shoulders, this figure can move its arm in and out and even move his arm more across his body since the second hinge allows the arms to move in towards the body.  It’s kind off hard to explain, but the result is a highly poseable figure.

One thing to note, this figure is definitely for older children to the adult collector.  In doing the review, I handled the arm kind of rough and it snapped right off the hinge.  While I am able to place it back and it stays in place, any further manipulation of the the arm will result in it falling off.  A shocker for sure, but that reminds me a lot about the NECA figures which tend to that more than I would like.  Definitely any figure that you get, make sure you work stiff joints carefully as they tend to snap with any kind of force.

Other than those issues, I love the articulation and poseability of this figure.  When I place it on my shelf, I will definitely pose him in some overly-dramatic way.
Score: 9.0/10 (Great articulation, although stiff joints lead to broken limbs)

All in all, this is a great video game character action figure done by a company known for making both great video games and great action figures.  For those not ready to plunk down serious cash for the Sideshow Toys figures will find that the Play Arts Kai figures are wonderful transitional figures at about a third (or less) of the cost.

This and most figures featured in this review are now available in the BlackActionFigure.com Store! 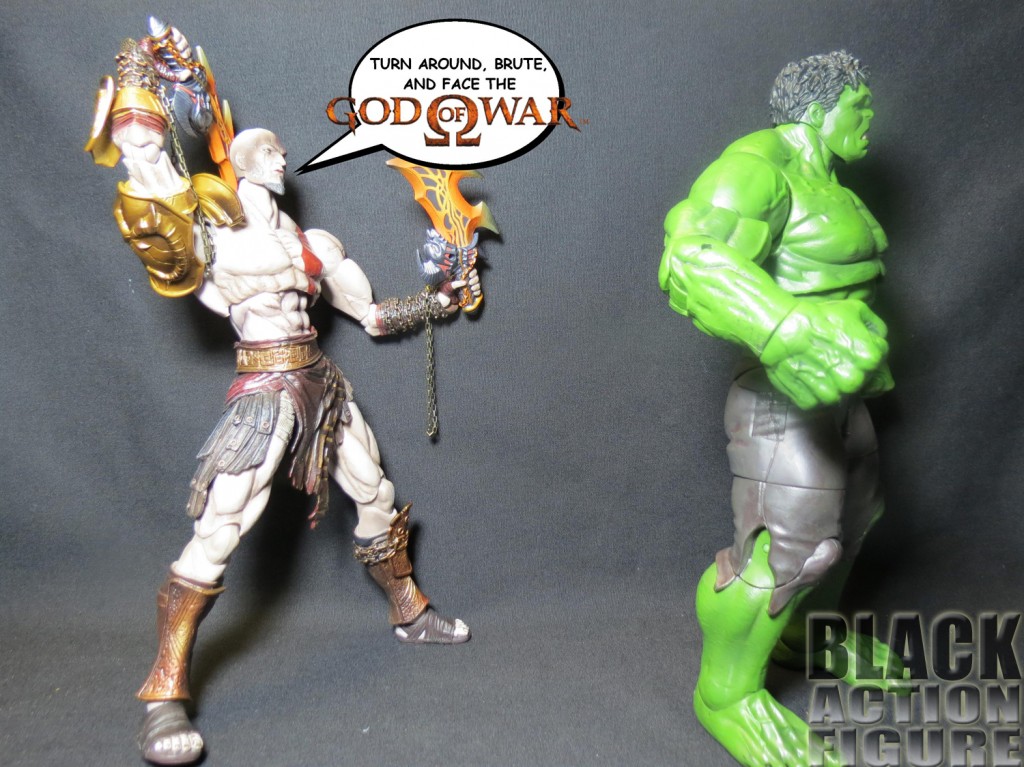 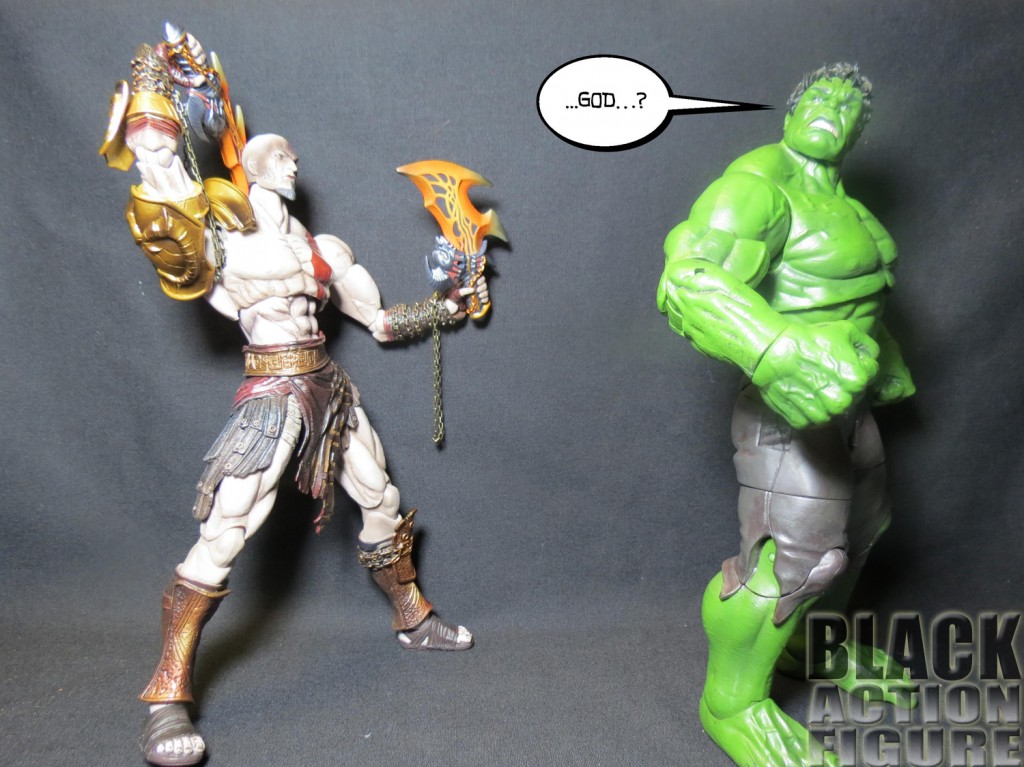 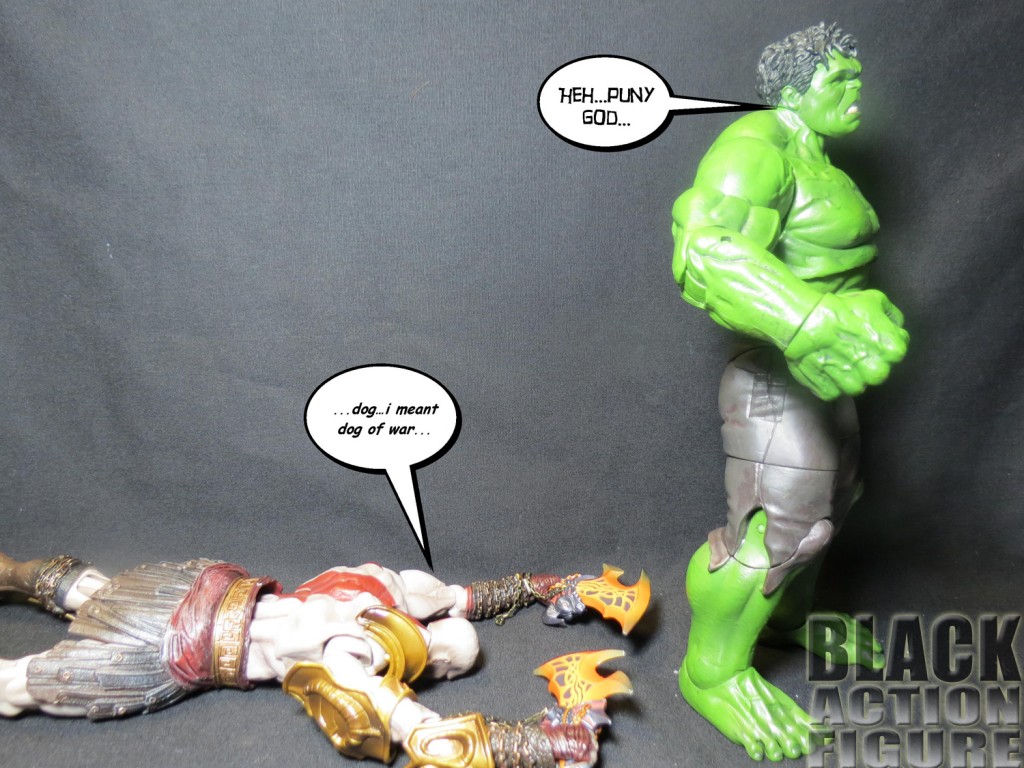