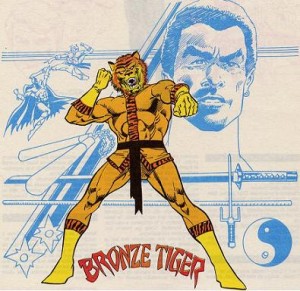 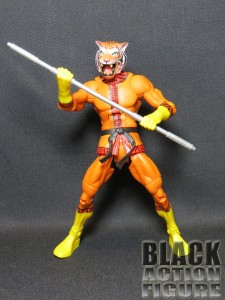 I have had some bad luck trying to review this figure.  The first time I was going to review it, we had some work done on the house and I misplaced it.  The next time I was going to review it I had it ready on my desk, but it mysteriously disappeared while we’ve had contractors, electricians, and plumbers in the house.  I’m not saying that one of them took it, but I know my wife didn’t move it and I know it didn’t get up and walk away by itself.  Luckily, it was relatively easy to get another one.

I honestly knew little about Bronze Tiger when I was reading comics.  I knew he was in the Suicide Squad under Amanda Waller, and I knew he was a bad-ass martial arts expert.  What I didn’t know for a while was that he was a Black man and considered one of the most deadliest martial artists in the DC Universe along with Batman, Deathstroke, Cassandra Cain, Lady Shiva, and Richard Dragon.  Let’s take a look at how this deadly assassin turned troubled anti-hero translate into plastic… 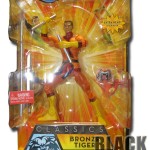 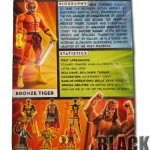 Packaging
I have never been  too impressed with the packaging in the Mattel DC Universe Classics line.  To me, it comes down to whether or not you want the character.  The packaging had never swayed me either way.  Compared to Hasbro’s Marvel Legends reboot, the look of this packaging seems antiquated and dated.  Hopefully when Mattel reboots this line, they change the packaging as well.

The actual staging of the figure in the clamshell is the best part of this figure (as well as the line).  Bronze Tiger is frozen in an action stance with his battle batons in hand.  The rest of the front of the package is a little boring although it offers the basic information.  The figure’s name, wave and figure number are on the front.  They have a symbol of a tiger as well (an emblem that really does not relate well back to the figure).  A small sticker on the front shows that the figure has an extra head.  I’m boring myself just describing this.

The back is a little more exciting.  It tries to feature a comic book-esque style with a short biography and statistics for the character.  The other figures are also displayed along with the “Collect & Connect” figure – for this wave it is Apache Chief.  More on that later.  Nothing too redeeming besides the fact that it does offer information you may or may not have known and it shows you the other figures you may be interested in picking up.
Score:  5.5/10 (Boring package, some redemption on back but not much) 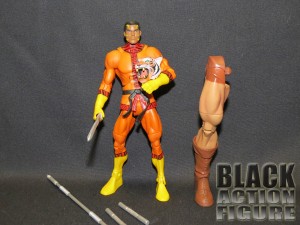 Accessories
One of the things that Mattel does well is include a good number of appropriate accessories with their figures.  They definitely did well with this one.  Along with his unmasked head, they included another interchangeable tiger mask head (Hasbro, learn from this…we shouldn’t have to chase down two different figures with different heads on the same body, a la Daken/Dark Wolverine).  What would have been really nice is if they made this an actual pull over mask instead of a separate head.  This figure also comes with a variety of weapons including a sword, two batons, and a bo staff.  Also included is the “Collect & Connect” right leg of the Apache Chief figure (review soon to come…one day).

What’s not included on the figure are holsters to place the weapons.  The Deathstroke figure has holsters galore to keep all his weapons.  Bronze Tiger just has to conveniently display them neatly next to him.  I don’t traditionally remember seeing him all weaponed up in the comic books, so this may be the reason for the lack of holsters.  Also notably missing is an action figure stand.  With this series, it’s a little hit or miss on whether a stand comes with the figure or not.
Score: 9.0/10 (Lots of nice accessories, but missing some obvious additions) 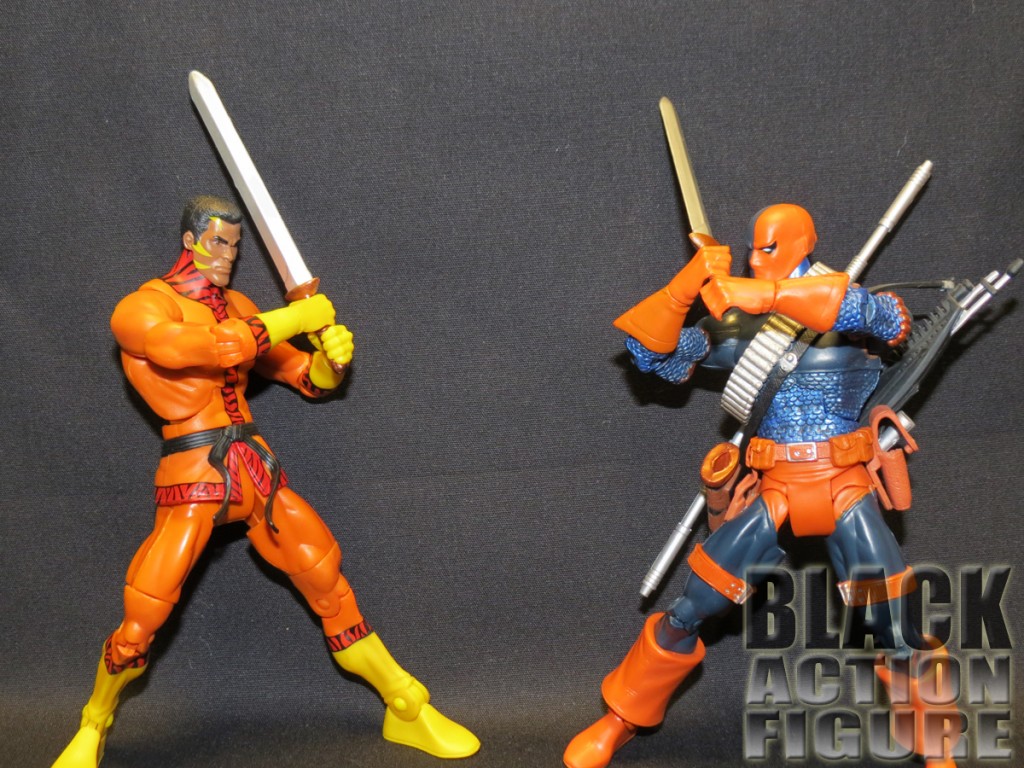 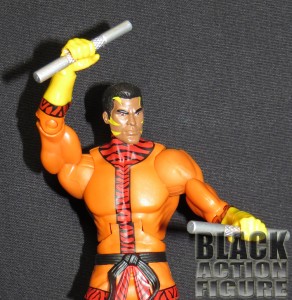 Sculpt/Likeness
Mattel got it right with this figure.  Bronze Tiger looks exactly like he does in the comics, with the same look he’s had for over 30 years.  While that may seem dated, I believe it works well with him.  The tiger head mask may be a little corny  for recent standards, but that doesn’t mean he looks less dangerous.  His head sculpt features a countenance of stoic determination in eliminating his opposition.  The rest of his body may be the basic repainted body sculpt, but the paint app was done well.  The addition of his belt and the flair on the bottom of his jacket round up the features of a pretty solid figure.

The only thing that I don’t like is the grip on his hands.  He comes with 3 sets of weapons and he can barely hold any of them tightly.  I had a lot of trouble while taking photos for him keeping any of the weapons in his hand.  I already know one or more of these weapons were repurposed for this figure.  I just wish they tightened his hand grip to accommodate that repurposing.
Score:  8.5/10 (Great sculpt, issues with hands) 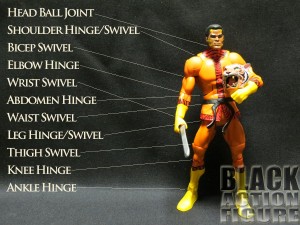 Articulation
Bronze Tiger is a shining example of how to articulate an action figure.  With over 23 points of articulation, this figure can be posed in a variety of action poses which works since the character is a master of the martial arts.

What can be added to his articulation?  Older Marvel Legends have finger and toe articulation.  If done right, that may fix his grip on his weapons.  His finger grip mentioned in the last section is one of the things that holds this character back.  While he can be placed in several different poses, his inability to firmly hold his weapon holds him back from his full potential.  I can put him in one pose, but most times have to readjust his hands so he will be able to carry his weapon. Nevertheless, this is how I would like all of my figures articulated.
Score: 9.0/10 (Great articulation hampered by poor grip)

While not necessarily expecting much from this figure, Bronze Tiger has the potential to be one of my favorite figures to date.  He can change his look with a simple head change, he is armed with a bevy of weapons, and he has great articulation.  Definitely a must buy for collectors and non-collectors alike!

This and all figures featured in this review are now available in the BlackActionFigure.com Store!
http://astore.amazon.com/blackaccom-20/detail/B004OB5N80 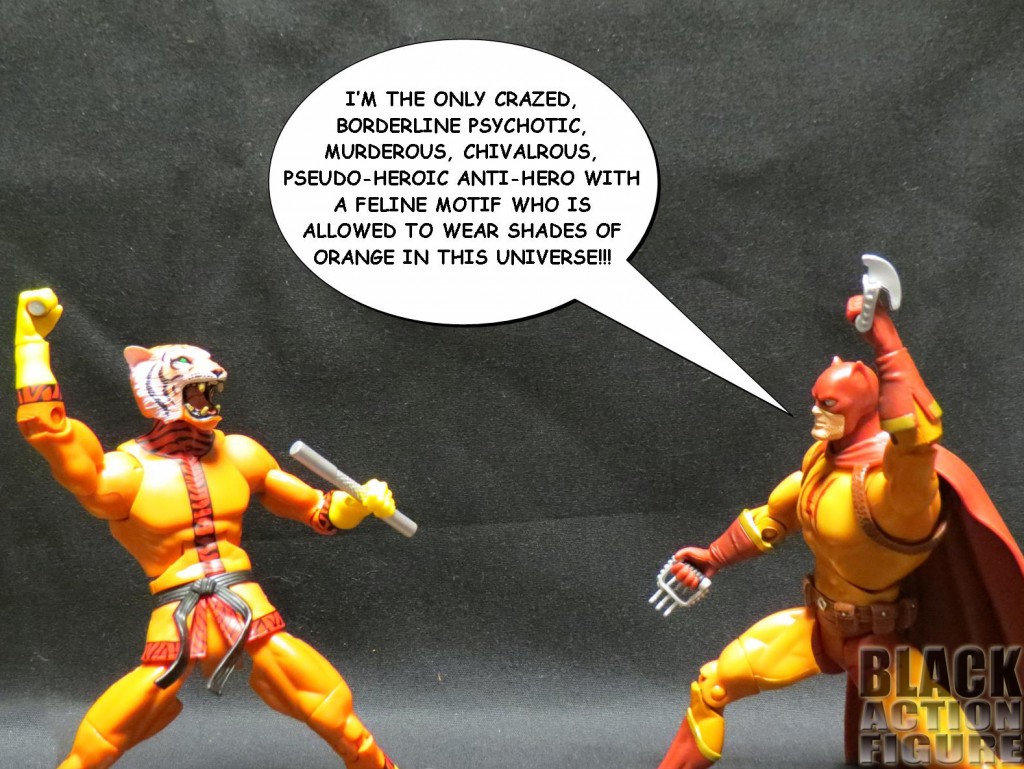 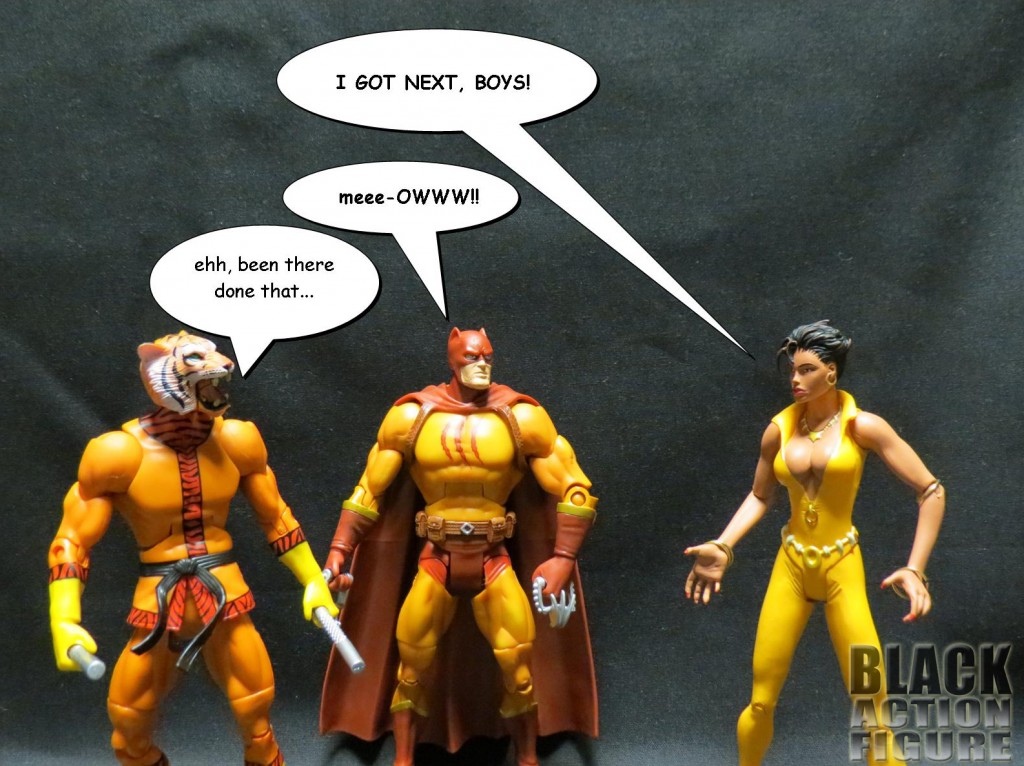