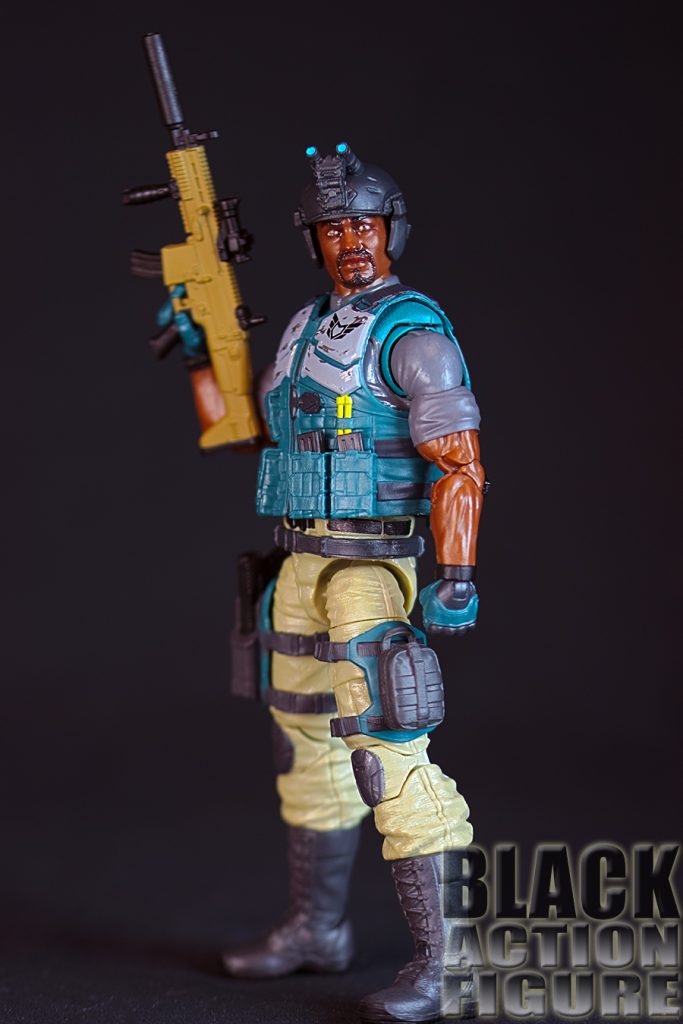 I collect a lot of figures, but rarely do I branch out from what I already know.  GI Joe Classified was just starting to trickle out when Big Bad Toy Store first advertised figures from Valaverse, a new company that had a pretty successful Kickstarter.  What intrigued me and many others about these figures were that they looked pretty compatible with the GI Joe Classified figures, even though they weren’t characters I recognized.  So I went ahead and dove in.  I ordered a set from Big Bad Toy Store which, long story short, took too long to deliver, so then ordered my first set from the now defunct Dorkside Toys.  I was actually among the first to receive the figures (since I live about 35 miles from Dorkside’s distribution center).  I opened the first one and was blown away. How could this new company be as good or better than Hasbro’s GI Joe line?

Well, over the next few months, I set out to learn more about this company.  Headed by former Hasbro toy designer, Bobby Vala, this company has weaved an intricate world through the use of comic books.  He has taken a previous intellectual property, and made it better than it ever was.  He even licensed in Sgt. Slaughter, a move Hasbro made with GI Joe back in the 80’s.  All this and he managed to put out an action figure line worthy of being great in it’s own right, and putting them out consistently enough to exponentially build a strong and devoted fan base with customers around the world.

Rollout comes in with Valaverse’s second wave of figures.  He is the first unique Black action figure in the line (the rest were army builders) and comes complete with a full back story, weapons and accessories.  Sounds like I’m already all in, so let’s check out the review… 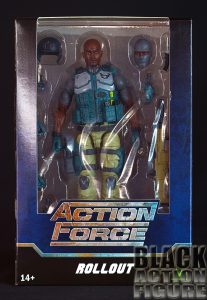 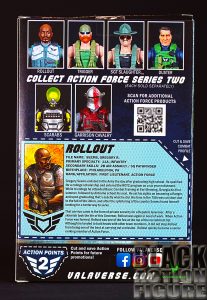 The packaging is reminiscent of other action figure lines, while still being unique.  While Hasbro has gone full cardboard (which is to me their way of cutting expenses), Valaverse has stayed true to its action figure origins with a collectible box with a window that you can see the figure and accessories inside.

The front, while nice, is pretty standard.  You get the “Action Force” title, along with the identification of the figure inside.  Flipping the box over, we are met with a surprise that the GI Joe Classified line has failed to do.  We first get headshots of the whole wave of figures, which is always nice for those still unfamiliar with the IP.  Then your eyes roll down to…a bio-filecard!  Yes, fans of the original GI Joe figures are familiar with this phenomena, something that the Classified line has done away with.  We get name, rank, background….and encouragement to “CUT & SAVE COMBAT PROFILE”.

But wait, there’s more!  What are “Action Points?” I have no clue, but this figure comes with 2 Action Points and you best believe I’m saving these things up because I know whatever Valaverse has in mind will be worthy of trading these points in for.

For real tho, the packaging on this and all Valaverse figures has almost made collecting fun again.  The only reason I won’t give it a perfect score is because I still have to break out my exact-o knife and carefully cut along the lines.  I know, I know, but that’s just me… 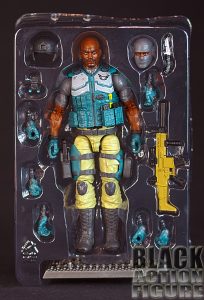 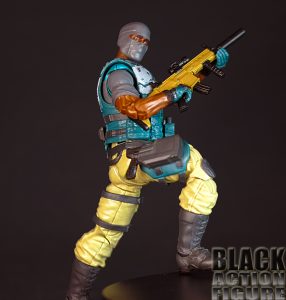 Ooooohhhh boy, I’m gonna have fun with this one.  First let me just say that Valaverse main figures retail for $32.  A price that Hasbro is scarily trying to get to.  The difference here is that Hasbro is a well established toy company with millions of dollars.  Valaverse is a new toy company that is unfamiliar to the masses.  What’s the difference?  Let’s talk accessories.

This figure comes with a helmet, night scope goggles that attach to the helmet, a rifle, a blade, an additional head, 3 extra pairs of hands in various poses and grips, and an action figure stand.  But wait, that’s not all!

I pulled the figure out of the molded plastic, and saw the pistol in the holster and magazines on his vest.  Now a Hasbro figure would come with that but then you try to take that stuff out only to find out that it’s glued into place.  But not a Valaverse figure!  The pistol and the magazines both come easily out of their holsters.  So in counting the accessories, you have to include these three as well.  Well shoot, let’s be even more fair…the vest can come off as well.  Counting the vest, and the removable magazine already in the rifle, that’s a count of 16 freaking accessories.  16! We don’t even get that many with Hasbro’s “deluxe” figures, and here we are getting them with this company that seemingly appeared out of nowhere.

I’ve heard people say that this line is highly customizable.  Well, when you include this many accessories, you can’t help but customize it to your liking….or even taking the accessories you don’t use here and use them somewhere else.  Mixing and matching to your content.

So what’s the difference between Hasbro and Valaverse?  It seems that Hasbro is run by a bunch of suits who are only looking for a high profit margin.  Valaverse is run by…a fellow collector who understands what it’s like to collect in today’s world. 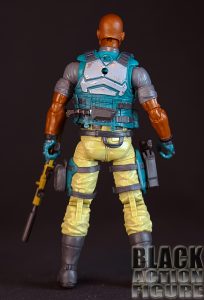 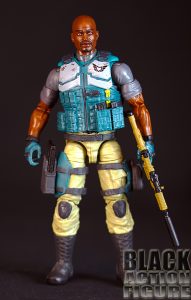 Rollout is a faithful likeness to its comic book counterpart, which should not be surprising as they are both produced by the same company.

While there is some reuse in this line, it’s reuse that makes sense.  There is enough uniqueness in this line in general and this figure in particular for you to enjoy. 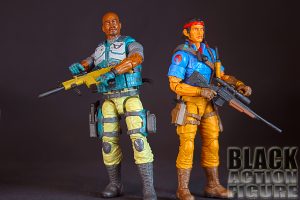 Like I mentioned earlier, this line scales well with the GI Joe Classified line.  Check out this picture with Rollout and Spirit.  It wouldn’t take a rocket scientist to know that you can display both of these lines next to each other and the common layperson wouldn’t know the difference.

The sculpt is great, the paint on the figure is great.  If I have any gripes is that the figures have an almost “deer in headlights” look to them.  So he’s either really intense, or he’s about to get run over by an F-150 on the backroads of Georgia.  I’m going to go for really intense. 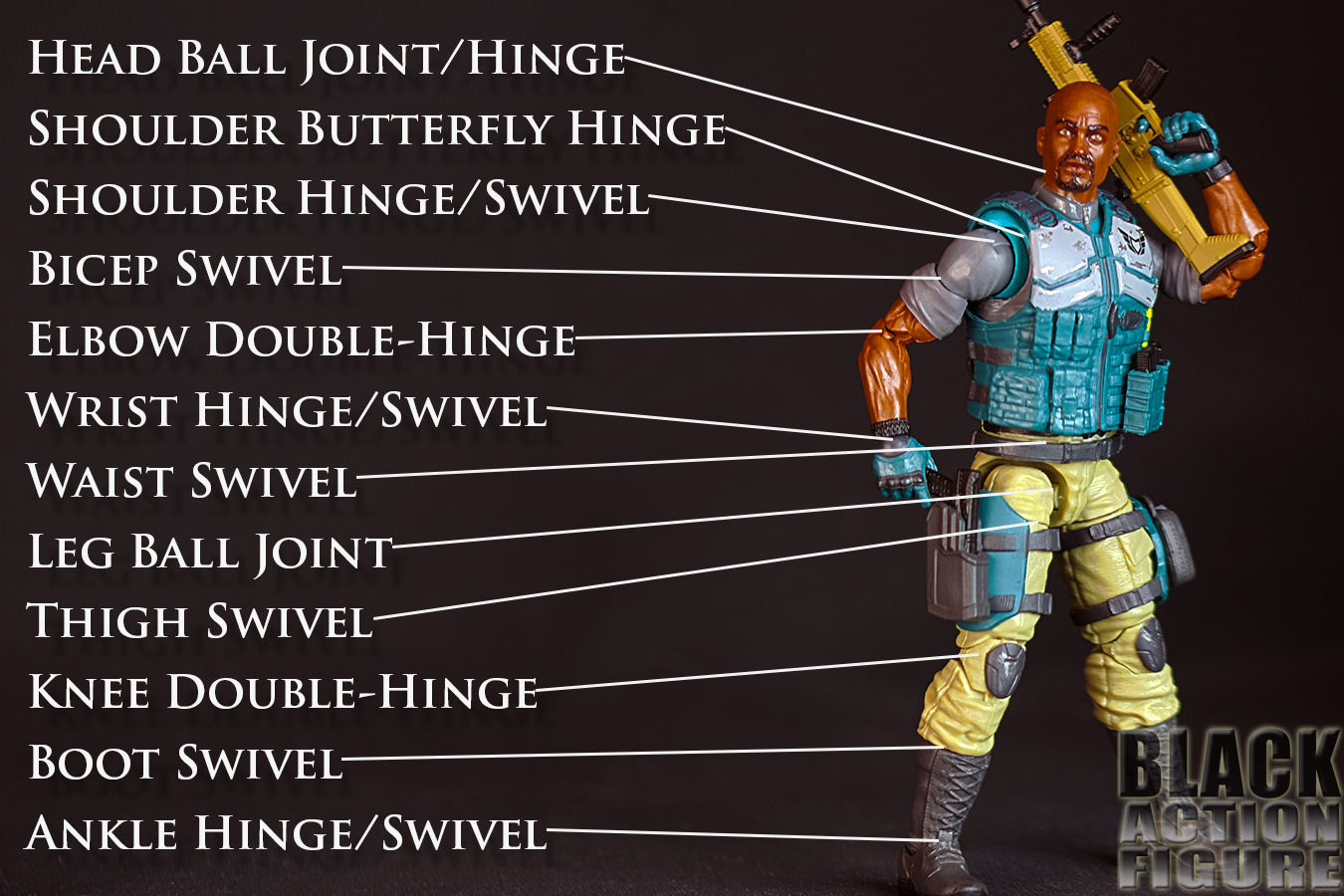 Being the new kid on the block, you know you’re gonna have to bring the articulation, and Rollout passes with flying colors with over 33 points of articulation.  BUT, there is a catch.  The first wave of Valaverse figures came with a note saying if you want to pose your figures, you need to either dip it for a few seconds in some hot water or use a blow dryer or heat gun to loosen the joints.  For this reason, I now keep a heat gun in my photo area.  I have tried to pose one of these figures without prepping it first and accidentally broke off a leg.  So now I make sure that I use the heat gun for a few seconds on the joint I want to bend before I try it out.  It works great on removing/placing hands and heads also.

Balancing is on point with this figure as well.  I may have used the figure stand once during my photo shoot.  And I was able to get it into almost any pose that I wanted to put it in.

I am extremely excited to see what Bobby Vala and his Valaverse do next in this line.  In less than a week, I will receive the next wave of figures, which will be an all female line, including one I intend on reviewing on here named Kill-Switch.

When I said highly customizable, it’s amazing what I’ve seen done with these figures already.  I have seen a GI Joe Doc and an Alpine figure made from Valaverse parts.

What I like to see is Valaverse getting bigger.  I’ve heard talks of the line maybe coming into Targets and Walmarts.  I have already started to see it spreading into the Amazon space.  If 2022 was the year for Valaverse, I’m excited to see what the future holds.  There are even talks of vehicles…and hopefully reasonably priced.

If you are at all interested in getting into this line, now is the time to do it while it’s just starting up.  Many people are just now discovering it and with Valaverse doing reissues sometimes, it’s a great time to start.