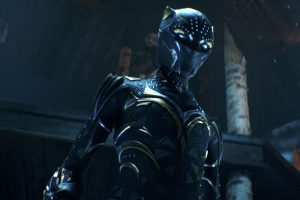 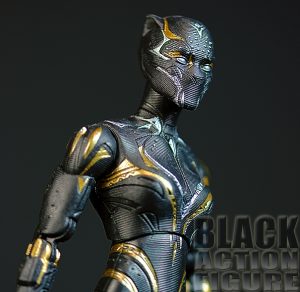 Another day, another review.  Tell me how I went from getting this figure 4 days before the movie to now waiting over a month to review it?  At any rate, Hasbro did a great job of distribution of “Black Panther: Wakanda Forever” movie figs, unlike the first time back in 2018 when we had such a lackluster release of figures that led to them rushing to get more out there.

Whatever you may think of the movie (in my humble opinion, it was just “okay”), it’s always celebrated when new figures come out, MCU-based or comic-based.  However, the delay of this particular figure which came out weeks after the first wave of Marvel Legends was due to the fact that everyone involved so desperately tried to hide the fact that (SPOILER ALERT) Shuri was the next Black Panther, a theory that has been bounced around the last few years (and a storyline that also happened in the comic books).  Add to the fact that I was only able to get this figure originally from the Hasbro Pulse store, and it has not seen wide release (although it is now on Amazon), it kind of led to a lackluster reception. Check out the review… 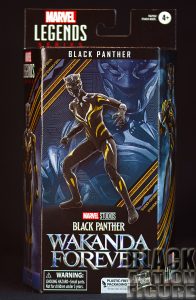 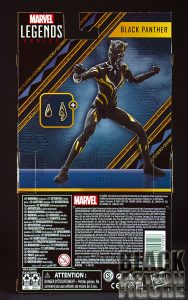 Again, Hasbro gives us the “future” of packaging.  A nearly plastic-less, all cardboard-based, and smaller version of the packaging they had used for years.  And while I celebrate the fact that I’m able to include this packaging in my cardboard recycling, there are some issues.

It is easier to get tricked.  And not just from the stores.  I ordered a Marvel Legends Hatut Zeraze figure from Amazon…and received a repackaged Doctor Strange Wong figure.  Thank goodness I had the foresight to check.  It allowed me to do a simple exchange, a simple process that unfortunately does take time out of your day to complete.  But sadly I feel like we are going to see more of this going on in stores everywhere.

Unfortunately, I’m going to have to score down the packaging from what I originally gave it (8.5 out of 10), only because I think Hasbro may have screwed themselves a little here.  They are saving money on the packaging, but losing it on the back end.

Other than that, it looks good with a promo picture of the figure on the front and another promo picture along with a picture of the packed in accessories on the back.  Noticeably missing is a “bio-blurb” of any kind or any other related figures.  Hope that comes back later in the future. 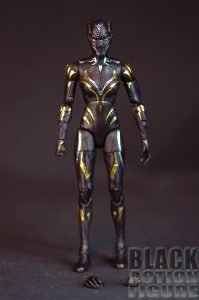 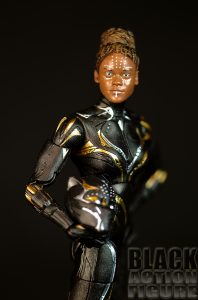 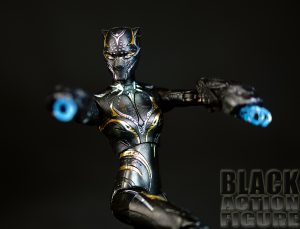 This one is pretty much is a huge letdown.  In terms of accessories, we get….another pair of hands.   Yep, that’s it.  So we get a pair of closed fists hands, and a pair of claws out hands.  Yeah, that’s just begging for a lower score.

So much more could have been included…first and foremost an updated unhelmeted Shuri head.  That would have been the first thing.  But I feel that they tried to keep the fact that Shuri was the Black Panther secret so much that the inclusion of the head would have revealed it.

My solution so far was to use the Shuri figure from the first Black Panther movie (which was re-released a few months ago and can still be found on the pegs in stores).  This gives us a head and even the panther-head gauntlets, which I believe she integrated into the suit.  This will do until (from my best guess) the “Deluxe” version comes out, probably around Blu-Ray release.  That one will probably include another head, more accessories, and an at least $6 bump in price. 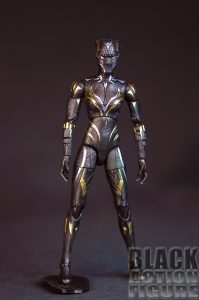 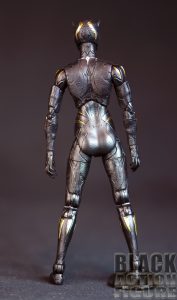 It’s funny because I just saw the solicitation for the 1/6 scale Hot Toys figure and I think both figures actually suffer from the same thing…they were both based on what was probably thought to be the final design of the Black Panther suit.  The suit itself in the movie is actually computer-generated.  Most likely Letitia Wright is just running around in a green bodysuit and the editing department generates the Black Panther suit around her.

This being said, I believe the final cut of the movie added some additional detail to the suit that is not shown on the figure.  The final suit in the movie had some more gold metallic detailing added.  There are also some decorative “triangles” (see movie shot above) that were added to the suit that I don’t see on this figure nor the Hot Toys version.  And of course, the Hot Toys version will strive to be the most accurate, premium presentation of the character, so hopefully that gets added on later.  For what we spend our money on, I don’t think it’s too much to want screen accurateness.

From what we are given, I enjoy the deco of the suit, even if it’s somewhat limited from the final design.  What I dig most (and sometimes find the most frustrating) is that the eyes of the helmet are actually a silver paint that give off a slight “glow” when light is reflected on it.  But, as you see in some of these pictures, if the light doesn’t hit it right, the eyes look dim.  I wish that same “glow” effect was available on a wider angle range. 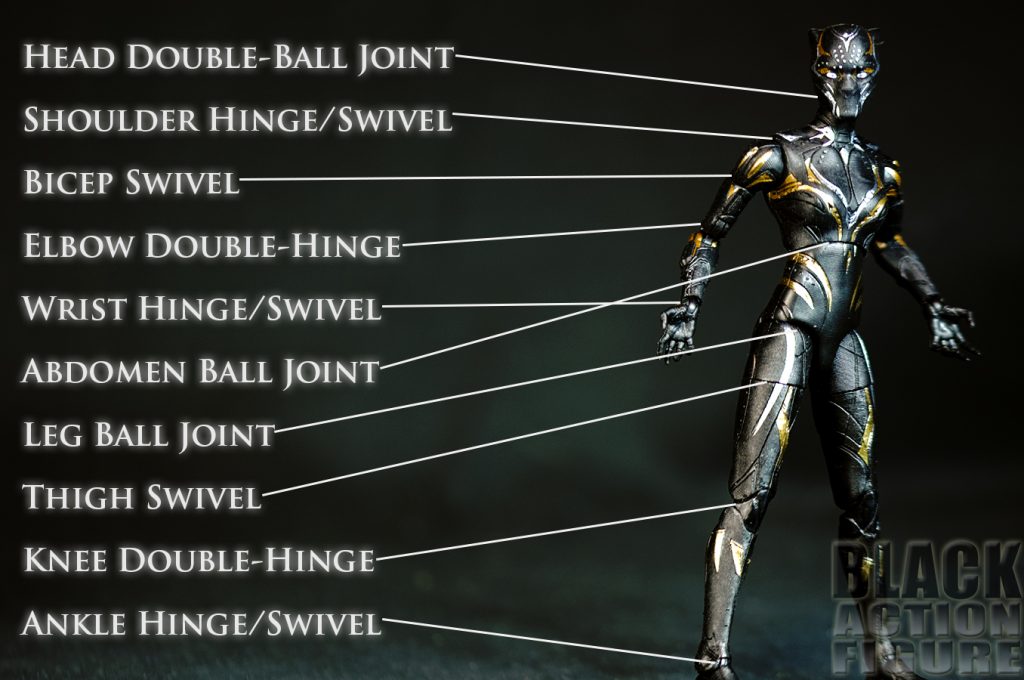 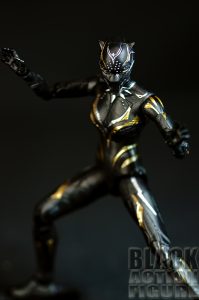 I found something different when I removed the figure’s head, and while I’m sure it’s been done before, this is the first time I’m seeing it.  The neck has a tiny barbell shaped piece in it giving the head a double-ball jointed articulation, as opposed to the ball-joint/hinge I’ve seen on previous Marvel Legends figures.  This still gives the figure the ability to look up and down and turn the head from side to side, although I’m not totally convinced that it is better than the previously mentioned ball-joint and hinge articulation.

This figure is also missing the butterfly shoulder joints I’ve seen on previous figures.  It would have been especially nice on this figure so that it could pose in the “Wakanda Forever” salute (without the need of a rubberband, like I admittedly used for the photo shoot).  Given that this is supposed to be an rather athletic character, akin to do moves similar to Spider-Man, that extra articulation would have been welcome.

At 29 points of articulation, this figure is no slouch, but I would have loved to seen some better range.  The shoulders seem not to rotate up all the way.  Missing is waist articulation, most likely supplanted by the abdominal ball joint.  I hope if they do release a “deluxe” version of this figure, they will seemingly “fix” all of my issues with it. 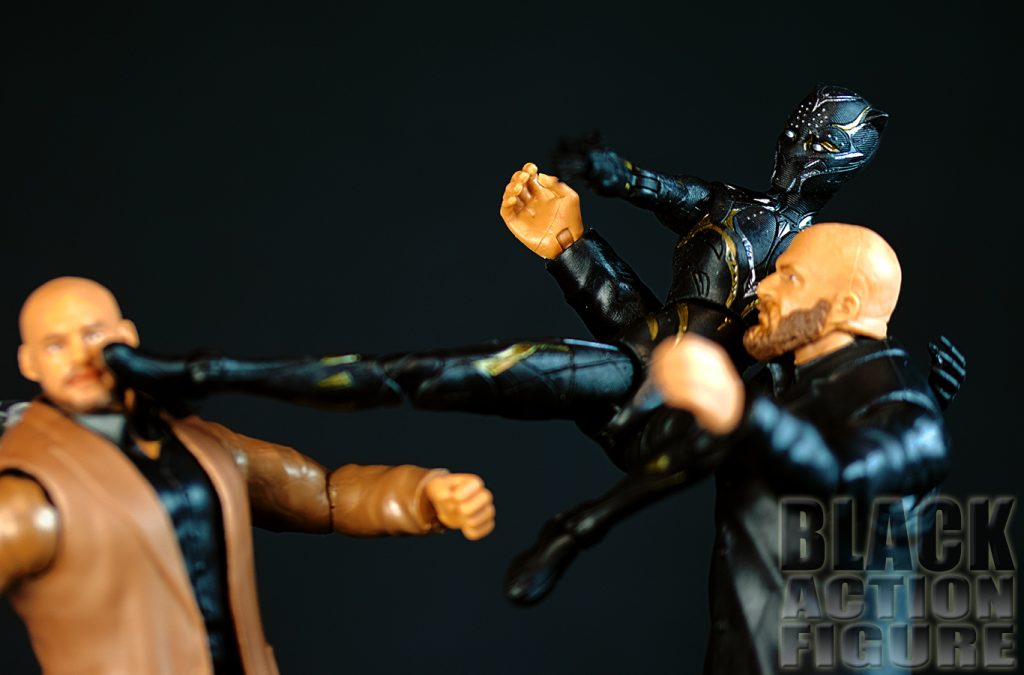 The final figure, like the movie itself, has not totally lived up to the hype.  I hope Hasbro addresses the issues I have with this figure.  Don’t get me wrong, it’s a good figure.  But I guess them rushing to get this out along with the need to keep it mired in secrecy kept it from being a “great” figure.

Seeing that as of this writing, we’re about 2 weeks out from Christmas, it would make a great gift for your action figure enthusiast, young or old.  It would help if I saw this figure in stores, but at this point, I’m not sure that I will.  I see a lot of the first wave hanging out on the pegs, along with the re-release of figures from the first movie like Killmonger, Shuri, Okoye and M’Baku.

I really hope we still get a chance to see another wave.  They still have a couple of different outfits for Shuri they could do, along with a couple of the Talokans, Michaela Coel’s Aneka character, and the Midnight Angels suits.   I wouldn’t even be mad for a new “General” Ayo figure.

If you do decide to get this figure, please use the link below.  All proceeds help support this site.