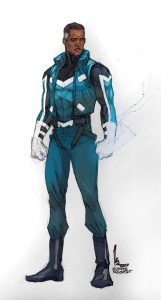 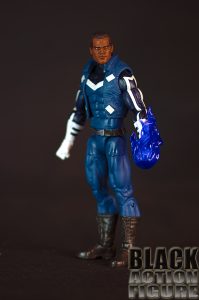 Leave it to Hasbro…I finally get my Blue Marvel figure that’s been number 1 on my Marvel Legends wanted list, and they give us the updated “Marvel Ultimates” look from 2015.  Okay, I’ll take it I guess, but I still want the classic version.  I’m hoping that maybe down the line we get a Walgreens or Amazon exclusive version of his previous look, you know with the cape (and maybe even helmet, you know, when he was trying to hide the fact that he is Black).

Many of you may not know him, and that’s okay.  Even though he’s been around for more than 14 years now in the Marvel Universe, that is still relatively young, and without presence outside of the comic books, it will be hard to know him.

Let’s just say lately that he’s now become active after trying to live a normal life for years.  His best friend is Uatu, the Watcher.  He is a brilliant scientist.  And one of the most powerful heroes in the Marvel Universe.  And now we have a figure of him….let’s check it out… 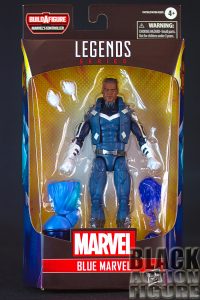 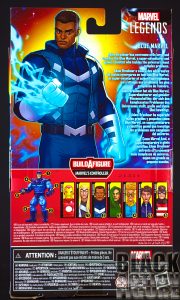 I believe this may be one of the last, if not THE last, wave of figures in the old packaging.  It’s kind of bittersweet…Hasbro has been using this style for nearly 9 years, since the end of 2013/beginning of 2014.  That is a lot of thrown away plastic.

I have heard mixed reviews on the newer, all cardboard-style, but I like it if for anything I can recycle the whole package.  With these plastic display windows, I have used some for my 3D prints and dioramas, but mostly it ends up in the trash.  So yes, there is some “collector’s guilt”.  At least I’m not doing what I did back in 2012 and try to keep the card backs.  Yeah, those all ended up in the trash.

Anyway, we get the basic packaging with name on the bottom center and artwork on the left and right sides.  On the back, we get the full artwork (which is actually really nice, would love a t-shirt with this), the character’s bio-blurb in different languages, and further down headshots of the rest of the wave with a picture of the Build-A-Figure…in this case, The Controller….whew, Marvel and Hasbro is really digging down deep to the “C” and “D” list trying for these Build-A-Figures.

Standard packaging gets my standard score…in fact, I’m going to bump it up a half a point because I like the artwork…even though I don’t like having artwork represent the figure inside (we’ll see how that goes when this new packaging ramps up). 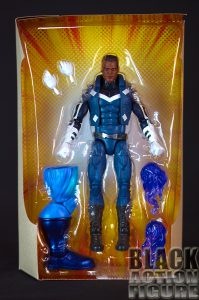 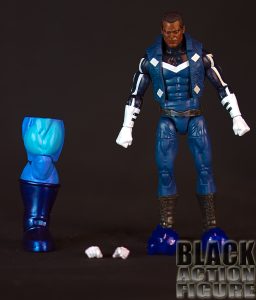 Pulling the figure out of the box, we get what seems to be a somewhat standard fare for accessories.  In this case, we get an extra set of “open” hands, two energy blast attachments, and the Build-A-Figure “Controller” leg.

Let’s speak on the Build-A-Figure for a sec….I hate sometimes having incomplete Build-A-Figures and I have so many lately because Hasbro has been pumping out figures at a phenomenal rate…so an “embarrassment of riches” if you will.  I’m actually glad to get this Build-A-Figure piece, and in turn, a complete figure because I couldn’t wait to get to this figure for review.

Anyway, not much more to say. Very average, if not pretty lackluster.  I would have wanted maybe more energy blasts in different shapes.  Maybe even a “bioluminescent” light blast.  Hasbro getting kind of chinchy with this plastic.  Thankfully, my 3D printers fill in the gaps of missing accessories, but not everyone has that or wants that.  I may be able to cobble some stuff together from other figures, but I shouldn’t have the need to do that, so I wish Hasbro would step up their game. 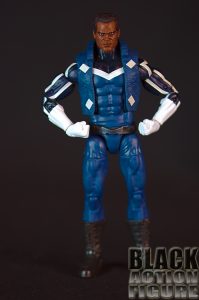 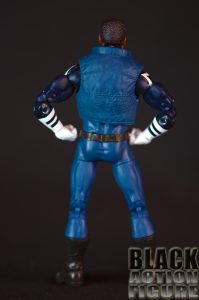 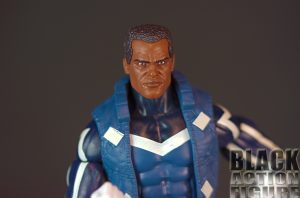 This is a near great translation of the Blue Marvel character from “The Ultimates” comic book to plastic form.  “Near” great.  What’s missing you ask?  Well, I know I’m not caught up on my comic book reading, but last time I checked, the Blue Marvel has gray hair on the temples of his head.  Even the artwork on the packaging shows that the temples of his hair should be gray.  But Hasbro in their infinite wisdom shows how little they now about the character and present him with a full head of black hair.

Is that nitpicky?  Maybe.  But the Mister Fantastic figure has gray temples, as he’s been shown for years in the comic book.  So why not Blue Marvel?  Sometimes I find Hasbro’s attention to detail sorely lacking.

The rest of the outfit on the figure is pretty accurate to the Blue Marvel’s time in The Ultimates.  Like I said, I’m not up to date, so he may have even moved on from this, but at least for now let’s say I’m good with it. 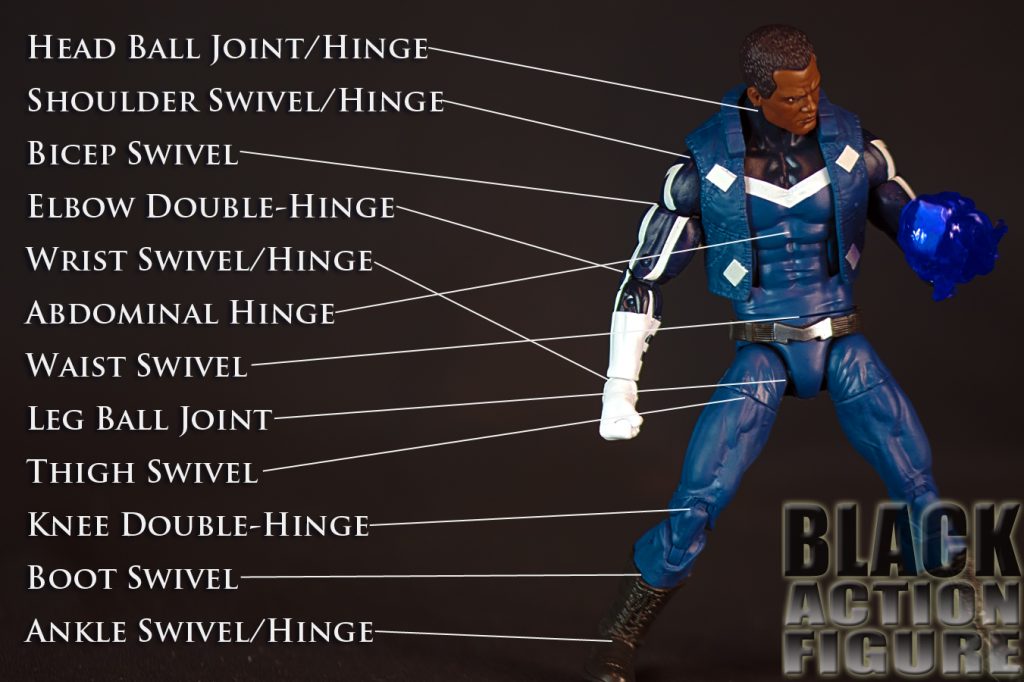 Not surprisingly, Blue Marvel comes with 32 points of articulation, which is about the norm.  I don’t know why it’s hard for some companies to follow this pattern (with their own unique spin to it).  The closest company that’s NOT Hasbro to come close and even surpass it is Valaverse (but I haven’t reviewed a Valaverse figure yet, that’s still coming).

I need to mention that while the head is able to go back, the collar of the figure’s vest prevents the head from going all the way back.  And the vest itself hinders some arm articulation, but not enough to really notice. 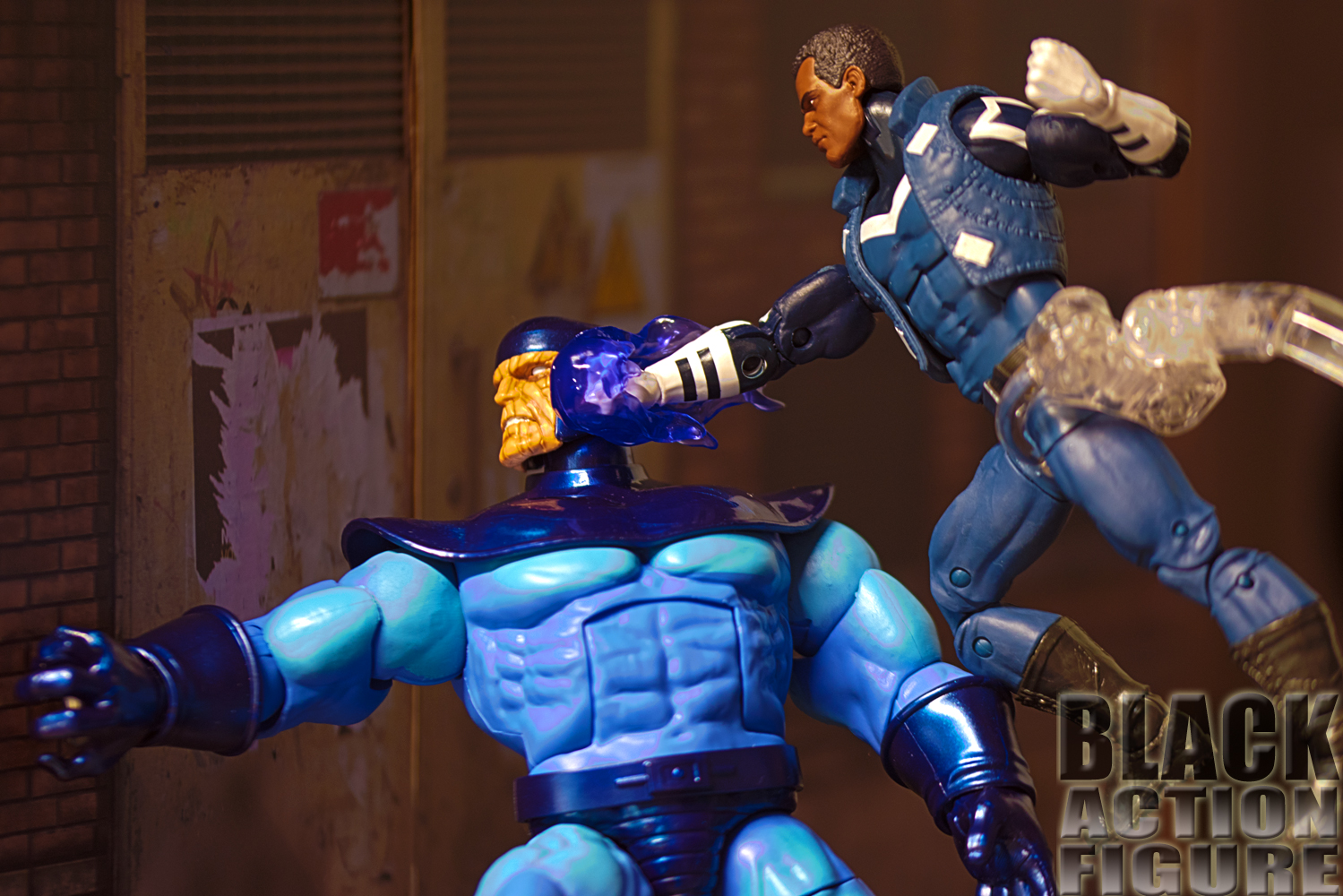 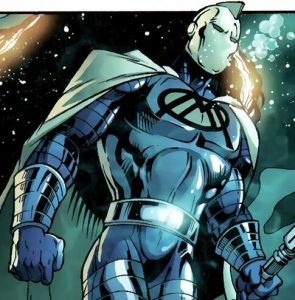 Okay, I’m sated…for now.  I really want the classic costume with the helmet (whether separate head with the helmet, or removable helmet).  That is now my next number one.

I’m still pretty bugged out about the lack of gray temples, but nothing a little paint, brush, and 5 minutes wouldn’t fix.  What I do like though is the fact that I can take this head and customize another figure with it.  I think that it’s generic enough to add to a Valaverse (there’s that word again) figure and gear it out.  Yeah, I’m gonna try that soon.

Keep on the lookout for a Blue Marvel giveaway!  I have an extra and I’m ready to send it to a lucky reader! 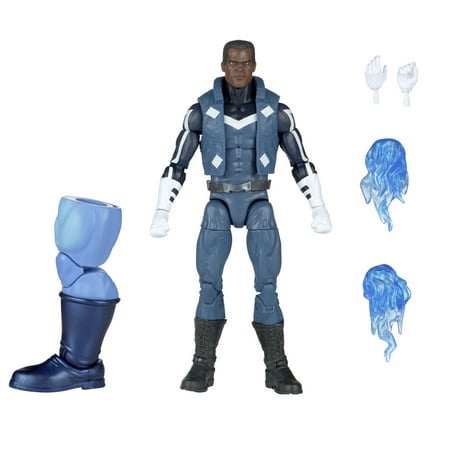