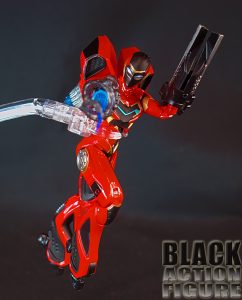 What?!? A review of a character figure that hasn’t even been fully introduced to the world yet?  Yes, I bypassed a couple other figures that I really wanted to review and went straight to this one…a character that I’m very much looking forward to being introduced into the MCU…Riri Williams herself, the Invincible Iron Heart!  This character has been shrouded in so much mystery that this figure is actually our very first look at the character (and with no other formal shots to even compare the figure with).

This figure came out of nowhere.  While it had been leaked a couple of weeks ago, there has been no official announcement or solicitation.  Soon after the Hasbro event, Pulsecon, put up their preorders, Iron Heart appeared on first Hasbro Pulse, then on other retailers (I received mine from Amazon).

They made this a “Deluxe” figure so it came with a “deluxe” price tag…is it worth the few extra dollars? Check out the review… 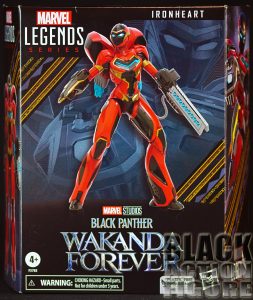 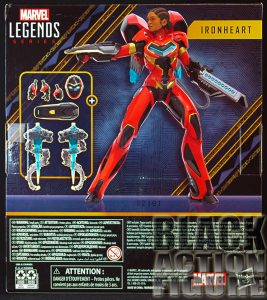 Alright now, I finally get to talk about the packaging!  While this has not been my first figure in Hasbro’s new “windowless” packaging, it is the first one I get to review. To be honest, I both love it and hate it.

Let me start with the love first.  I love this packaging because I have recently been opening a lot of my figures…and let me tell you, I recycle what I can, but end up throwing away A LOT of plastic. I mean, a literal shit-ton (not really a ton, but it’s a whole lot).  With this new packaging, I get to recycle…about 99% of it!  That makes me feel great because while we don’t recycle everything, we try our hardest to get the cardboard to the recycling center.  What they do with it from there, I don’t know, but at the very least, I get it there.

Now the hate…I think a lot of us share the fact that since we can’t see the figure from the outside, only the good Lord knows what we’ll actually be getting.  For this very fact, I have yet to get a “windowless” package from the store, and only have been receiving the ones I order online.  I would hate it extremely if I got home, excited to open my figure only to find that someone had already switched it out and instead I end up with some lame $5 clearance figure that was packed inside.

Design wise, I think the windowless packaging has been all over the place.  I have seen product shots of the figure.  I have seen artwork instead of the figure (some of the newer GI Joe windowless packaging). There has been no consistency.  BUT, I do like the fact that the front of this particular package shows us the picture of the promotional figure and the back shows us everything that comes with the figure.

There is some drawback to getting early prototype promotional pictures of the figure.  Sometimes we don’t get everything we see.  Case in point, do you see the tube in the picture from the gun-arm to the back of the suit?  Yep, that’s not included. I went to look at the additional promotional pictures on the Hasbro Pulse site, only to confirm that we will not be getting this from Hasbro. Oh well, time to cut up one of those extra USB cables I seem to have plenty of and customize it out. 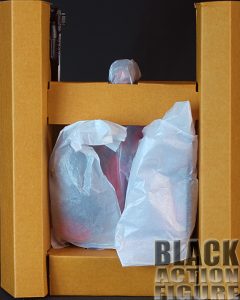 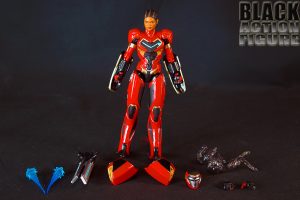 I included this first pic to show how the figure is packaged inside the box.  While I do like this new package initiative, let me just say how unfair it is that this generic packaging which can only lower costs at Hasbro, is still costing us a premium on these figures.  At these prices, I don’t think the normal layperson can sustain collecting.  It’s bad enough as is that I’m picking and choosing.  Keep in mind that when Marvel Legends first came out from Toy Biz, they were $7.99 a piece.  Now they are $25+ depending on how big, how many accessories, etc.

I digress.  In the bags you see from the first pics are both the figure and the accessories.  And since this is a quote-unquote “deluxe” figure, we get plenty of accessories.

I would say this is a pretty good number of accessories.  My only problem is figuring out how to attach them.  I found myself referring to the box and then promotional images online to how to properly attach a lot of these accessories.  And even then, I was about 50/50 success rate.  I figured a lot of stuff could be properly attached after you remove the forearm armor.  Then the pain of the ass thing is attaching/detaching accessories without the stuff already attach falling off in the process.  Yeah, that was not fun.  At any rate, I was thankful for what we received, but wish we had better instructions and better attach rate. 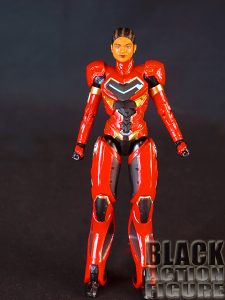 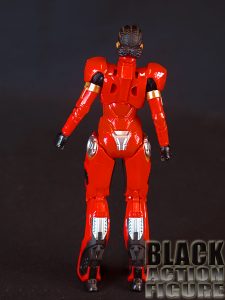 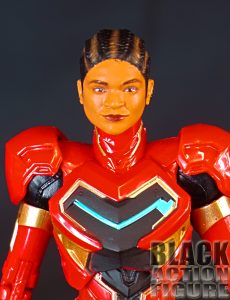 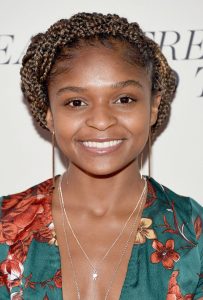 I have to apologize in advanced.  I dropped my camera and macro lens while photographing, and possibly broke my macro lens, so I had to use a regular one.  So I apologize for the quality of some of these images.

With no actually shots of Dominique Thorne as Riri Williams/Iron Heart, I was reduced to using this headshot I found while Googling her.  Let’s talk about likeness first…

I see the likeness in the head shot, but it is hampered by one major thing…it feels like the wrong tone of brown was used.  If I just go by Dominique’s picture, then Iron Heart should be a little more chocolate, but instead they went with generic brown.  But if I take elements from both pictures, I can see the likeness.  The eyebrows, the nose, the ears, the lips.  Yes, it is close, but as a black person, if you get the wrong tone of brown, the whole imagery is messed up.  I do like the corn-row hairstyle, though.

I have nothing to compare the armor to yet, so yeah, nice armor. But, I’m a little suspicious over the super glossy plastic and paint used in the armor.  Will the armor be this glossy in the movie? Doubtful.  And the glossiness of the armor makes it pretty hard to photo.  You can see in the pictures a lot of light reflected back in the shots, causing me to adjust a lot of the exposure and brightness settings in post.

Don’t get me wrong, I do like the full armor of this figure.  But I have nothing to compare it to, so I’ll just score an average.  Maybe I’ll revisit this later down the line… 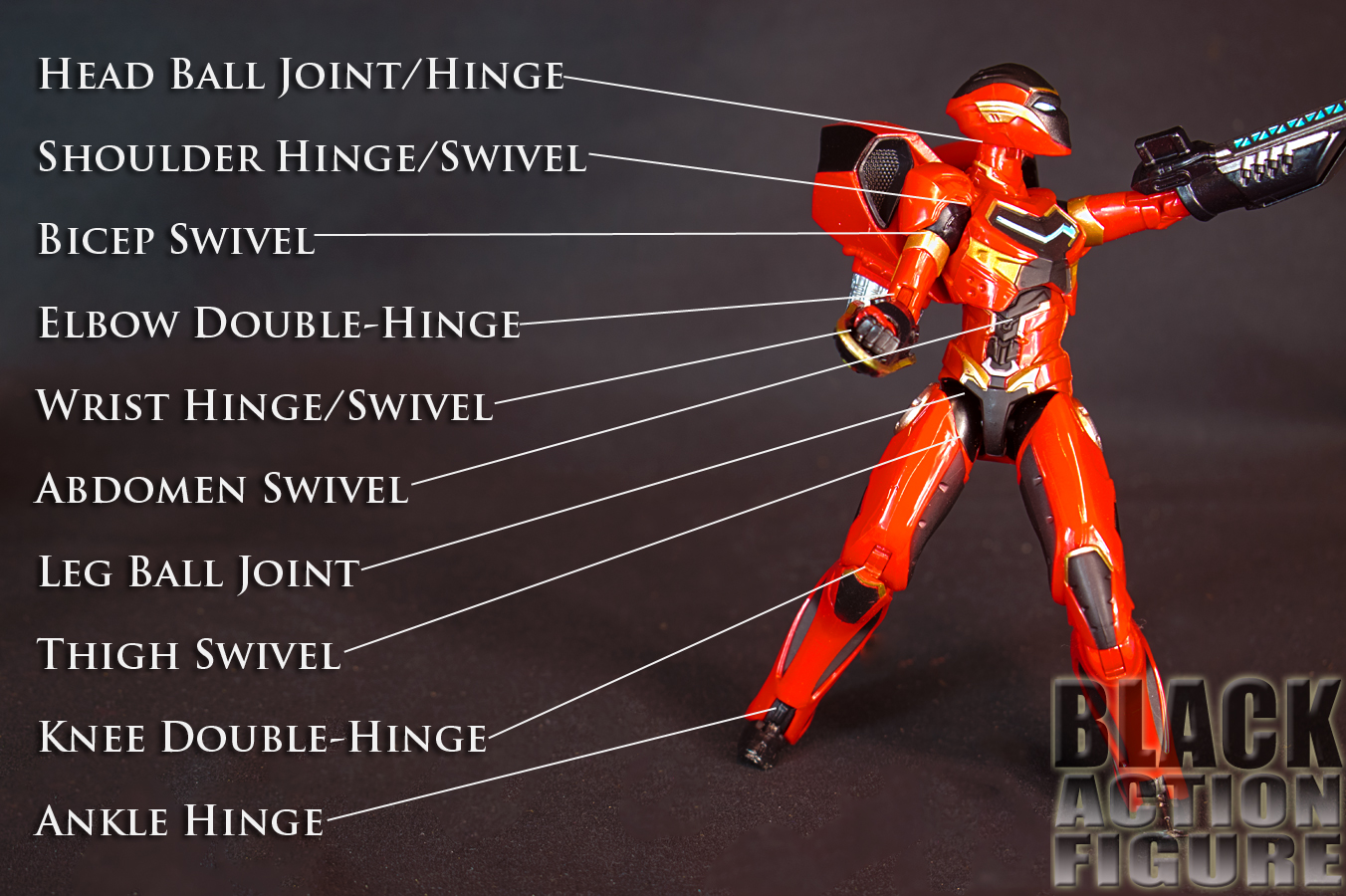 Surprisingly, Hasbro has only loaded this figure with about 27 points of articulation.  Normally, nothing to sneeze at, but we usually see 30-34+ points in a regular figure.  I can only imagine that the armor has limited the normal articulation we normally see.

We’re missing the “butterfly” shoulders that we have been seeing.  Also missing is swivel articulation at the ankle…mainly because this is an armored boot more than an ankle.  Waist swiveling is missing, notably substituted by swiveling in the abdomen area.

This is a flying character, so I was able to get some good posing using the figure stand.  The figure is pretty balanced at standing straight up and down, even when loaded with accessories.  But put a little bend in the knees and rotation in the abdomen, and suddenly you’re trying to find the balance point of the figure.  Luckily, I was able to do so relatively easily. 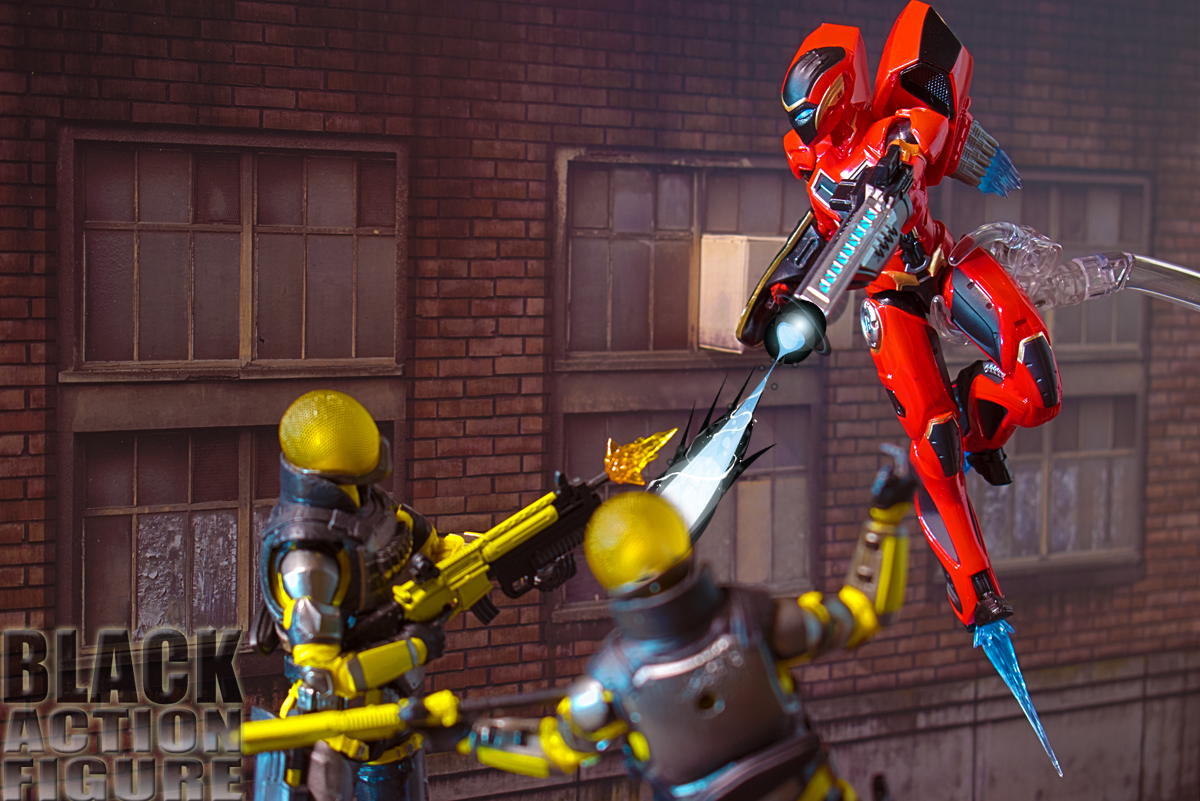 What can I say other than I can’t wait for November 11….I’m hoping that Ryan Coogler does it again.  And I hope that Iron Heart becomes a fixture for sure in the MCU.

What’s weird that with all of Kevin Feige’s shuffling of the MCU schedule, I haven’t heard of a Iron Heart Disney+ show or movie come back up again.  I really hope that’s still in the cards.

In spite of it’s shortcomings, this is a definite pickup.  If you are planning to purchase from Amazon, please consider using the affiliate link below.