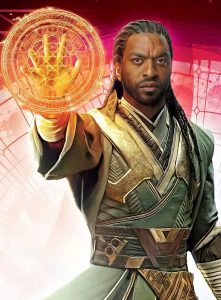 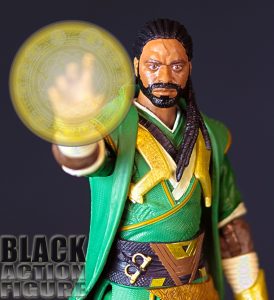 Yeah, I know, I’m about 5 months too late for this one…but a) I have a backlog sitting in a box waiting to be reviewed and b) I have some even older figures, so just get used to seeing these when I get to them. Truth be told, I had to review a Marvel Legends figure next…McFarlane Toys figures were aggravating me to no end.

By now, you should have seen “Doctor Strange and the Multiverse of Madness” and if you have not, go ahead and pull up a free trial of Disney+ and watch it.  Quick review: it’s ok.  I really expected more Multiverse stuff.  With the vast array of characters in the Marvel Universe, it wouldn’t have killed them to introduce 2-3 of them into the MCU.

I got this figure about a week or two before the movie, and truth be told, I was pretty excited. Here’s Mordo from the last movie, looking pretty badass, and his idle threats from the end of the last movie will pan out in this one right?  Well, I won’t spoil it for you, but this figure probably put me in more anticipation than what really happened in the movie.  With that said, I’m going to try and separate the figure from the character, so let’s get into the review. 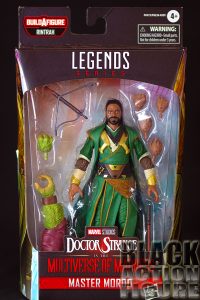 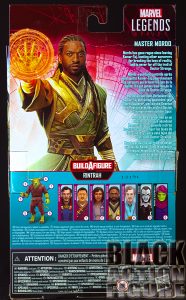 We’re still about 6 months away from Hasbro’s anticipated packaging change, so we’re still in the land of a plastic window along with a plastic tray insert to hold the figure, which is fine. I have started to get the all-cardboard packaging with my figures and I have mixed feelings about it, but until I get one for the site, we’ll just hold it down with the OG packaging.

Nothing groundbreaking here.  Pretty standard packaging.  I did notice on the front that Karl Mordo is now “Master” Mordo.  That should have been a clue for me about the movie.  I do keep expecting at some point that he will be known as “Baron” Mordo like he is in the comic book, but I won’t hold my breath on that.

The back features an illustration of the character along with a bio-blurb.  We also see the figures in the wave and the Build-A-Figure, this time being Rintrah, a character that appears in the movie. 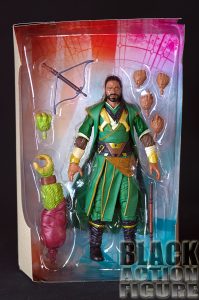 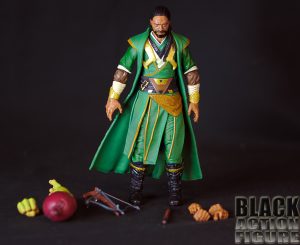 Taking the figure out of the package, I’m presented with not a bad amount of plastic included with the figure.

Of course we get the Build-A-Figure pieces, this being Rintrah’s right arm and an extra exchangeable hand.  Along with that, we get 2 more pairs of exchangeable hands for Mordo, and 2 different weapons, a crossbow (which for the life of me I can’t remember him ever using) and his weapons from the first movie, the Staff of the Living Tribunal.  We have seen the Living Tribunal statue show up in Loki, and if I remember correctly I believe he was also one of the statue heads in “Thor: Love and Thunder”.  Also, in a “blink and you’ll miss it” moment, the actual Living Tribunal shows up in this Doctor Strange movie, so the fact that the first figure did not come with it and this one does is a good thing. What it all means, I don’t know if we’ll ever know.

I guess the question that I ask myself is that are the weapons significant to this particular movie?  The answer is “no”.  These may be weapons Mordo used from the last movie, but unless I’m wrong, Mordo doesn’t pull out any weapons in this movie. It’s just Hasbro playing catchup, like they did when they made a Marvel Legends Shuri figure for “Avengers: Infinity War” instead of “Black Panther”. 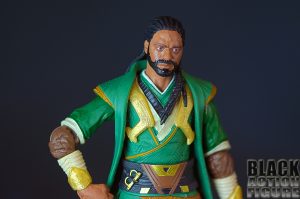 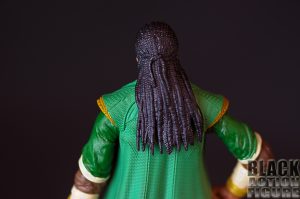 I am surprised with the amount of detail we got, but at the same time, I’m pretty disappointed at the paint application.  Their own illustration on the back of the packaging shows all of the coloring and detailing that they missed, or even cared about.  Almost giving Hasbro a reason to come out with a repaint with more “accurate” colors.

Master Mordo himself should actually be about a shade darker than what he is. I love it when toy companies, Hasbro included, fail to try and match skin tones when they make their figures.

The head sculpt is good and recognizable given the standards, but it is a little off somewhat.  I think they made the nose and chin areas a little too wide, and then tried to hide the fact that they messed up by making his beard darker than it should be. The beard looks like he got into a bottle of Bigen and went to town.

All in all, a pretty blah figure. I do like the hair sculpt, until you realize he’s supposed to have corn rows and instead they gave him a different style. 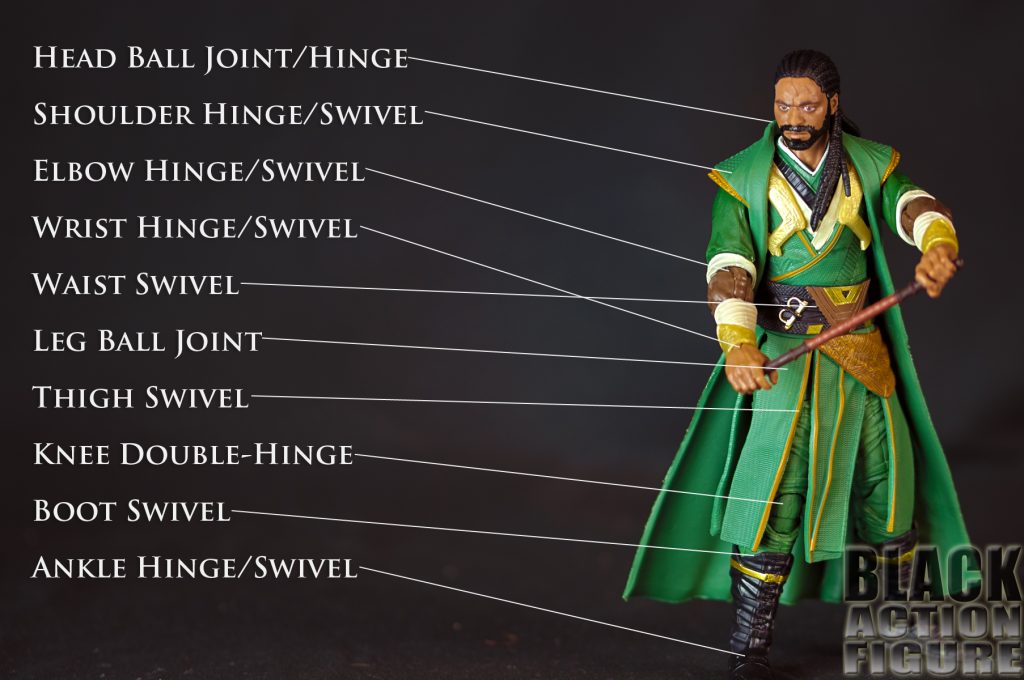 Articulation is basic Marvel Legends style.  I’m seeing about 30 points of articulation (give or take).  What I’m not seeing are the recent butterfly shoulder hinges to give the arms a greater range of motion and that may be because of the figure’s cloak.

The hinge in the neck allows the figure to look down, but the plastic molded hair is preventing the figure from looking up.  We also are seeing less articulation in the mid-section, most likely due to the uniform.

Other than the hindrance, I’m glad that the extra clothing pieces did not affect balance too much and I was able to pose the figure and keep it standing for the most part.  I did get a kneeling pose, but the you do again have to watch out for the cloak because it can be hard to bend and keep the figure balanced.

All in all, a pretty stable, albeit average Marvel Legends experience. 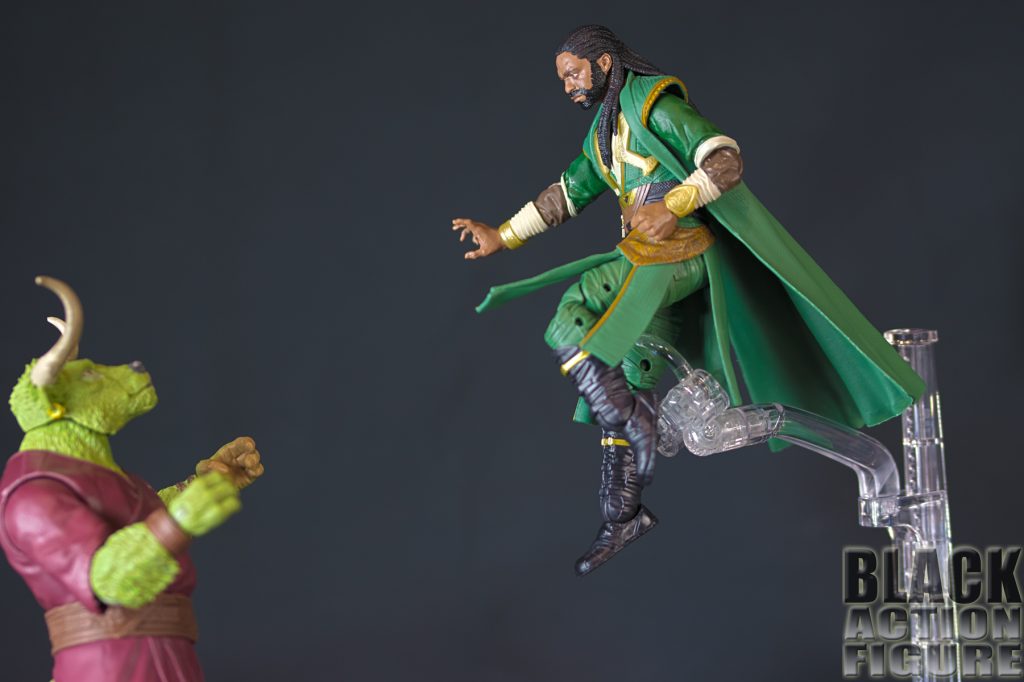 I’m glad that I went ahead and reviewed this figure.  It did give me an appreciation of Hasbro Marvel Legends again after dealing with so many McFarlane Toy figures.  Figures can be solid, but not heavy.  Well articulated and balanced, not top heavy and fall down in any pose without the use of a figure stand.  Well proportioned with good sculpting and paint apps.

Now I didn’t say perfect. There would be some things I would change on this figure.  I think given a timeline sometimes, Hasbro has to produce a figure before the final character is presented…and there could be changes anywhere in that process.  Which only gives Hasbro the excuse to come out with maybe a deluxe, “movie-accurate” version…and then they get to double down on collector money.  It’s all a marketing practice.

I do have several “Build-a-Figures” I couldn’t put away because the last piece is with a character I haven’t had the chance to review yet.  Rintrah, from the movie, was one of those figures.  It was satisfying to be able to complete it, but in the storage box it goes…unfortunately no room for it on my shelf.

Look for more to come soon!  I’m doing about a review a week, but I want to at least up it to 2.  And I’ve become an affiliate partner with Walmart now too (hopefully Target soon to follow), so please be sure to try and use my affiliate links when they’re available.  Look for more news on that soon as well! 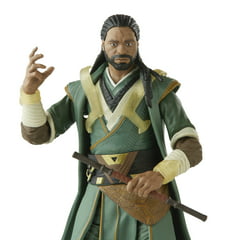 DISCLAIMER: This review contains affiliate links, which means that if you click on one of the product links above (on Walmart or Amazon) and purchase this product, I’ll receive a small commission (at no cost to YOU). This helps support the site and allows us to continue to make posts like this. Thank you for the support!