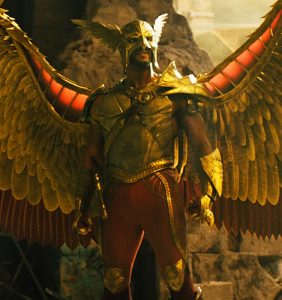 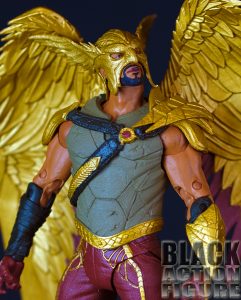 I don’t know about you but I’m really looking forward to the next DC movie, “Black Adam”.  And it’s not because of the Rock.  It’s because of awesome actors like Aldis Hodge who portrays Hawkman in this movie.  I’ve been following Aldis’ career since I first seen him on the TV show “Leverage,” and he continues to rock out the roles I’ve seen him in, so I expect that hopefully he will rock out his role as Hawkman.

You may ask “how is Hawkman Black?” and I would be okay. While their history has been muddled and retconned to death in the comics (and on screen), both Hawkman and Hawkwoman have histories that date back to ancient Egypt…which could be shown in this movie (don’t know if they’ll go that deep, but it will be interesting to see). One history for Hawkman in the comics is that he has been constantly reincarnated over the years since ancient Egypt…so in theory, he could be Black, White, Asian, whatever…does fictional reincarnation have any rules?

At any rate, when I knew that there was going to be a Black Hawkman and that it was being played by Hodge, I knew I needed this figure. So how does it rate? Let’s check it out. 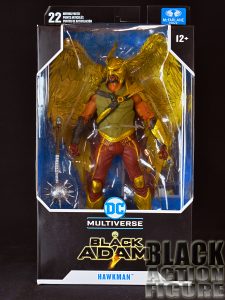 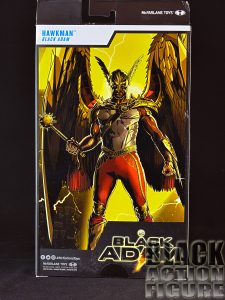 The packaging turns out to be standard McFarlane Toys fare. On the front side, you get a standard windowed box so you can see the figure inside.  While it’s normal to have the movie prominently on the front, I get a little dismayed as to how small the name of the character is on the bottom.  My eyes often miss it or look over it even when I’m actively looking for it.

On the back, we don’t get an actual picture of Aldis Hodge as Hawkman, we get an illustration representation of Hawkman from the movie…but why?  Yes, it looks nice, but wouldn’t you want to more attune your figure to an actual movie character?  This feels…disjointed…in a way.

Noticeably absent are the rest of the figures in this wave.  If you wanted to know how many other Black Adam figures there were, hope you have your phone with you, because you’re not getting it here.

The packaging altogether is just “meh” at best.  It is best described as “the object used to transport your figure to you”.  Out comes the figure and in the trash it goes. 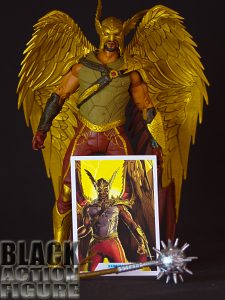 Taking the figure out of its repressive packaging, we get to fully see everything it comes with.  Right off the bat, I can tell that the wings are huge and take up most of the packaging. I enjoy the fact that even though they don’t come attached to the figure, they package it so it looks like they do.

Freeing the figure from the inner plastic and first putting it together is initially satisfying.  It is a sturdy (maybe too sturdy?) figure.  It comes with the wings which of course are removable, the signature Hawkman mace, a trading card, and a figure stand.

While I sometimes applaud the addition of a figure stand, let it be said that McFarlane Toys figures most definitely need a figure stand just to stay upright.  I’ve never known a company to produce so many figures that just can’t stand on their own. This has to be a number one complaint somewhere.

The wings, while removable, are not as articulated as I like.  They fit onto the back of the figure via a peg, and they swivel on that peg, but that’s it. There are no additional joints or hinges to stretch the wings out or anything. I’m lowkey pretty disappointed at the lack of wing articulation.

Then the mace. The head of the mace is actually a little dangerous, with rigid spikes protruding from it.  I have once or twice felt that maybe it was a little too sharp.  In contrast, the shaft of the mace is made of that malleable plastic that everyone hates. Not only is it hard to keep it’s proper form, but I think it makes the figure unable to hold it properly. It falls limp in his hand…posing the figure in an action pose with the mace held up takes the patience of Gayle King interviewing R. Kelly.  Yeah, that much. 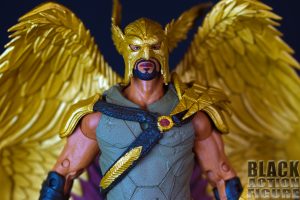 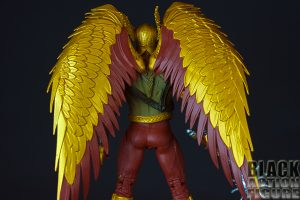 “But how much does it look like Aldis Hodge?!”

Umm, that’s a loaded question. So let’s talk about the good first.

The paint and sculpting detailing is on point. I’m not big on paint exactness on figures (unless it’s sloppy and completely obvious), but the paint applications on this figure is really good.  What impressed me the most is the gold on the wings, helmet, and various armor pieces. It’s nearly good enough to actually look metal. There are some cracks and crevices on the suit that could use some black paint detailing if you’re so inclined, but otherwise nicely painted and sculpted figure on the front and back.

My problem comes with the actor likeness.  First, we all know that McFarlane Toys is not putting any extra heads with their figures. What we may get down the line is an “unmasked” version of this character…but until then we just have this. And really, this could be any black dude in a Hawkman helmet. It feels almost like McFarlane Toys got the rights for the character, but not the rights for the actor. So a no go on that one. Just use your imagination, I guess.

One more note on the body. It almost gives off a “fat Thor” feel.  Although we know that Aldis Hodge is not fat and in fact, got built up for this role. I wondered if maybe he’s a bigger figure to account for the armor. But looking at movie shots of the character online, this figure is definitely smaller in the midsection than the figure. I then realized that they probably added some extra girth to the figure to keep it standing and for articulation reasons.  Okay I guess…

Sculpt/Likeness Score: 7 out of 10 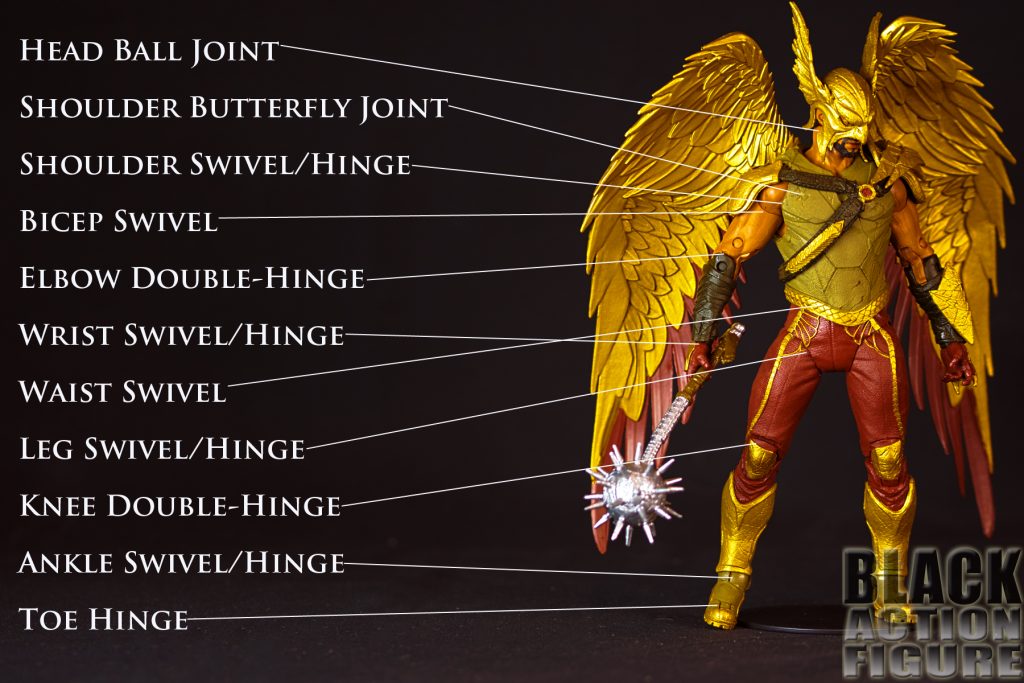 I got pretty excited when I realized that McFarlane Toys created a figure of a flying character which has a head that can go back or look down. I had to know how they managed this strange feat of engineering that Hasbro pretty much figured out years ago.  Did they add an additional hinge to the neck?  No, McFarlane Toys added a ball joint to the head, instead of the ball joint being on the neck. I guess I could have taken a picture to have shown you, but it really wasn’t that mind-blowing.

With that in mind, this figure has a potentially impressive 30 points of articulation.  I say “potentially” because again, keep in mind that this is McFarlane Toys.  Any pose you do would 95% need to include the figure stand.  When posing, I got happy that it would keep a pose and then stand still while I take the picture.  Then after the picture, I figured out there was a point of articulation that would have made the picture better, but knowing how much I struggled the first time, it’s not worth it trying again.

The upper body and the lower body are again attached by a giant ball joint, which gives the figure articulation, but in trying for more complicated poses (or really not even that complicated), the figure came apart continuously at that joint.

And I completely forgot about the toe hinge…it was kind of useless at that point.  I got some okay posing and shots done, but I feel with the available articulation, I really should have done that much better… 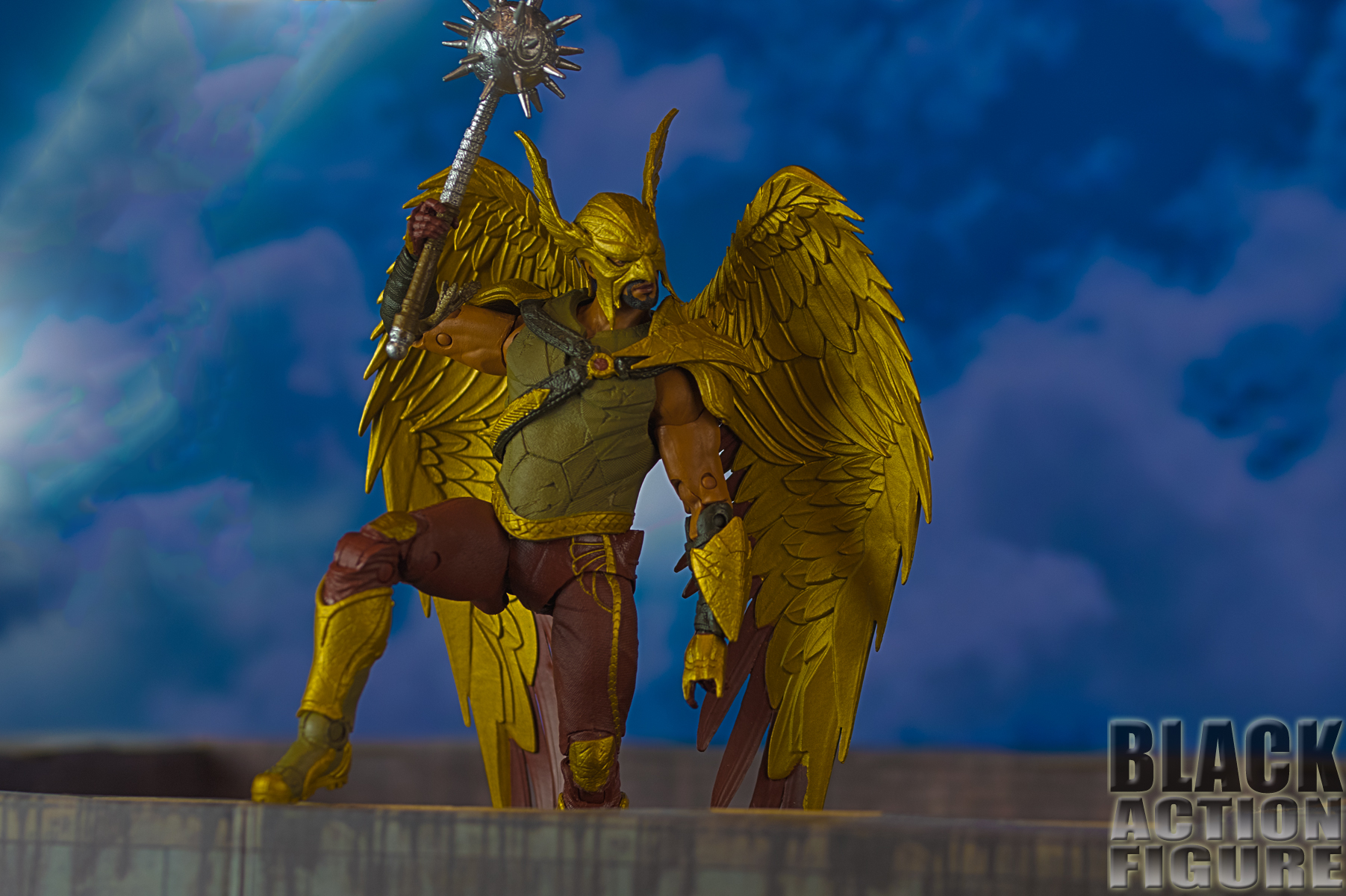 I really am getting to the point of getting tired of reviewing McFarlane Toy figures.  They are such an oxymoron…beautiful figures, lots of available articulation, solid figure…but in hand it just kind of all falls apart.  And I still have Cyclone, Black Adam, and Spawn to review.  I may need to pace myself.  I was going to do Cyclone and then Black Adam next, but I may just dive into my backlog and pull something else random.  I know I have plenty of Hasbro figs to review. And I have the debut Valaverse figure I would like to get to…in fact, that may be my new poll (that I seemingly change every 2-3 years).  Which figures do you like to collect the most?  It’s obviously Hasbro for me…

I really hope this Black Adam movie does well.  It really seems the DCEU movie universe is coming apart at the seams.  No more Henry Cavill as Superman, or Ben Affleck as Batman.  No one knows the status of Gal Gadot and Wonder Woman (after that pretty terrible “Wonder Woman 1984″) and Jason Momoa Aquaman could potentially be his last.  I really wish we could count more on DCEU like we do the MCU.  Oh, and I hope I don’t shoot myself in the foot, but we really need some DC characters to be in scale with Marvel.  I think McFarlane really missed out in not making 6″-6.5″ figures instead of going with the 7” scale.  His sales could have potentially been through the roof.