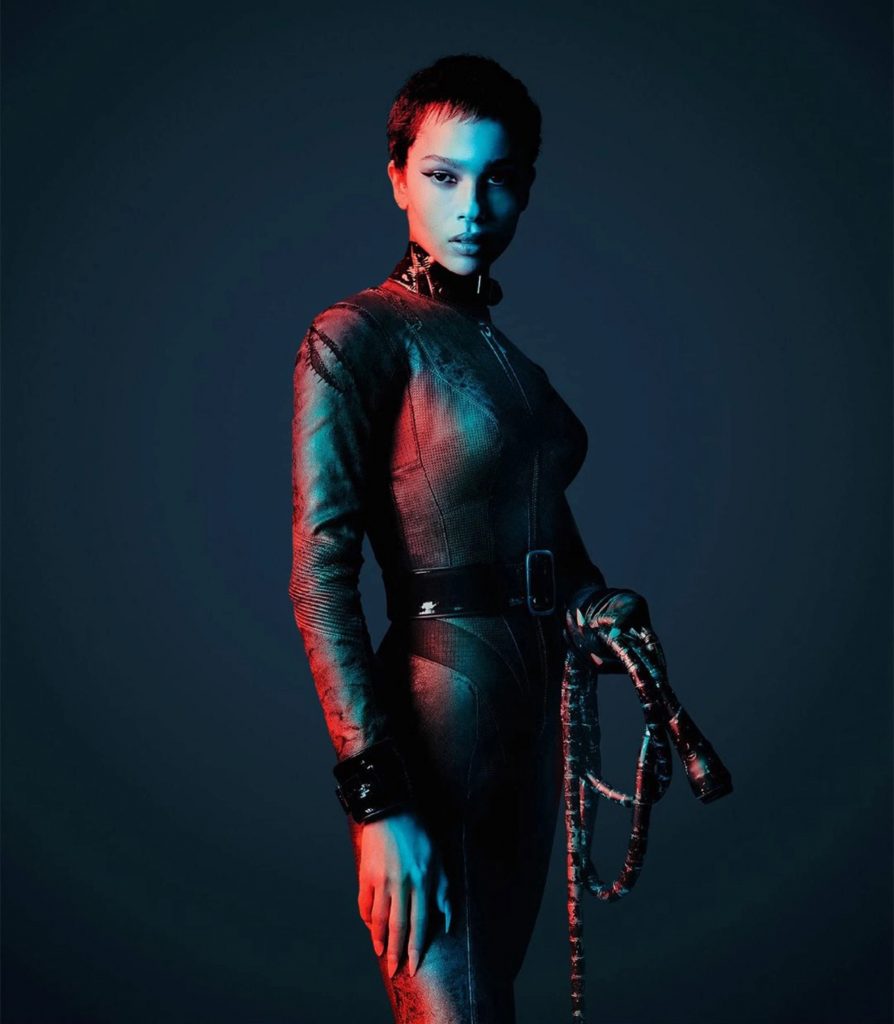 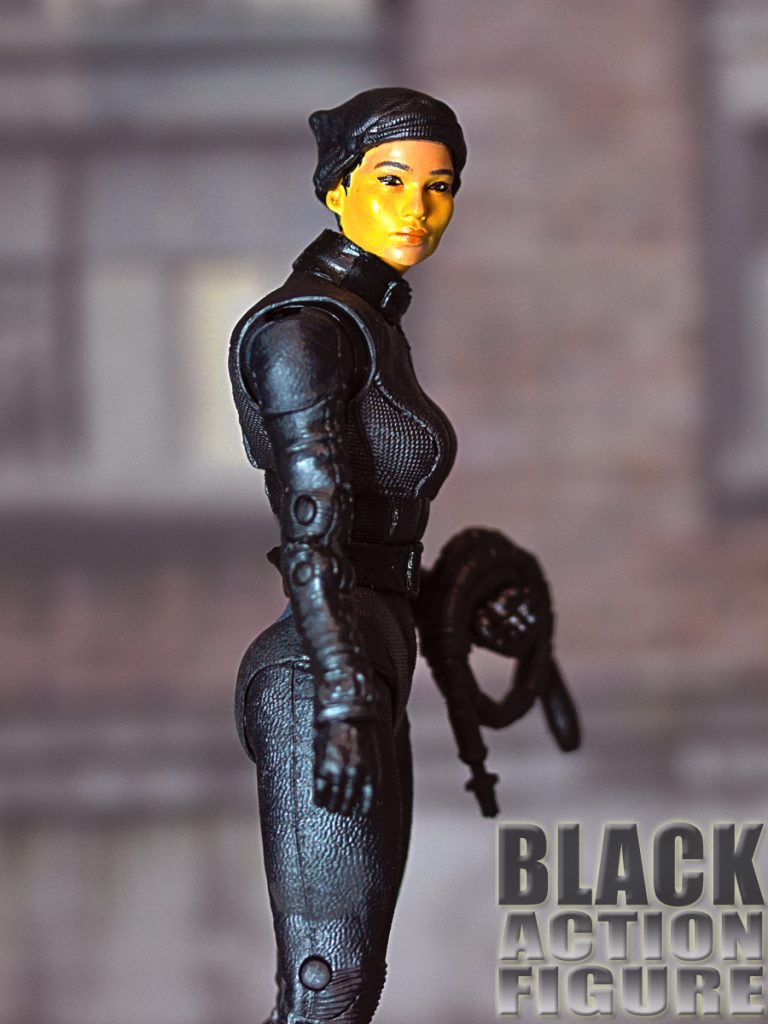 I’ve figured McFarlane out. We always suspected that his “$20” a figure was too good to be true and it is…because it comes with some cutbacks.  You see, instead of McFarlane Toys selling a figure with suitable accessories, the company tries to “double-dip”. They sell the same figure (in this case, Catwoman), only one has the mask on the head, and the other one is maskless.  So in essence, we are paying near $40 (or more) for essentially a complete figure.

To me, they are double-dipping a little too much.  Yes, I see the 20 repaints of the same damn figure that they do, but not including basic accessories just to release it as a separate figure?  That’s a special type of greed and if McFarlane Toys is to survive, they need to do 2 things: sell the figure with an extra head and accessories and stop being greedy, and two, stop with all the damn Batman figures! We get it, Batman is the most popular IP in DC history.  Please stop shoving it down our throat.

But I digress…we focus today on masked and unmasked Catwoman…portrayed by the beautiful Zoë Kravitz…from the movie “The Batman”.  Quick note:  Yes, I saw the movie.  Another quick note:  Yes, I fell asleep about halfway in, so I have to see it again.  But until then, we have this figure…think it will push me to rewatch “The Batman” again? Let’s check it out… 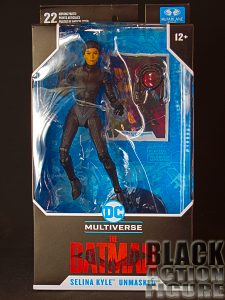 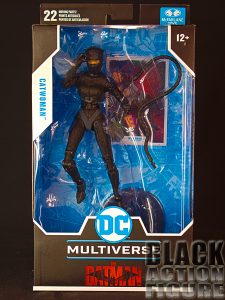 McFarlane Toys “DC Multiverse” packaging is….bland at best. But curiously, I look at these two figures, which I purchased both on Amazon, and notice the subtle differences in the packaging.  I almost wonder if one of these figures was supposed to be an exclusive to one of the retailers, (I’m guessing the unmasked version) but that plan fell through because I have seen both of these figures in Walmarts and Targets and several online retailers. 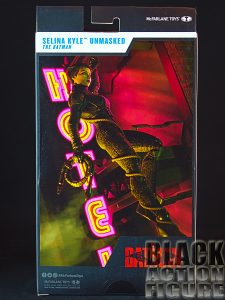 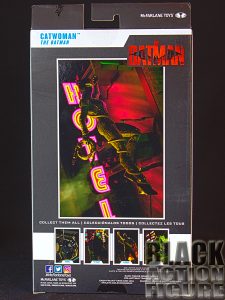 But how unexciting is the front of this package?  Besides the weirdly different window sizes and endorsement placements, we get to see the figure including, ummmm….the figure.  And a whip.  And a “collectible” (ha) card.  And a figure stand.  And none of it feels particularly coherent.  I mean, maybe if you were really into the movie, then yay?

The back is to me, equally uninspiring. You have the respective figures in a picture (from the collectible cards!) with the same exact pose and the same exact backdrop. Except in one picture, the figure has a mask on and in the other picture, it is pulled up.

I’m guessing the “mask on” Catwoman is the general release because we get a glimpse of the other figures in the wave.  The unmasked version has nothing but the product picture.  A big yawn from the front to the back. 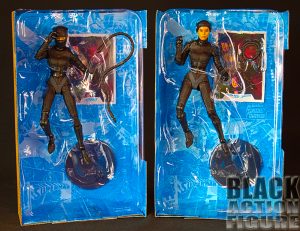 I slip each figure out of the box packaging hoping to maybe to be wowed by the figure inside and…nope…same feeling I get looking at the figure from the outside is the same feeling I get when I take it out.  If you want to see some true figure excitement, just wait until I review one of the Valaverse figures…that’s a feeling I wish all figures had when you take it out the box.  But I digress. 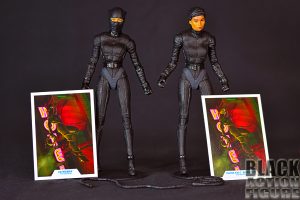 The masked Catwoman figure comes with an open bullwhip.  I originally thought it may be bendable and keep it’s shape, but after I tried, it just slowly reformed back into the shape that it came in.  Maybe some hot water would help it.

The unmasked Catwoman figure came with the same whip, only closed.  And closed, it would remain forever.  So if you ever wanted to see the unmasked version with an open whip…well, you get the point.

Each figure comes with a figure stand…which should be standard for all figures and is an absolute necessity for most McFarlane Toy figures (at least in my opinion).  I don’t think I would have been able to stand this figure up without it.  This almost makes up for the Eartha Kitt figure not having a stand.  Almost.

And outside of the “collectible” card(s), that’s it! I have to rewatch the movie again, but shouldn’t Black Ca….errrr….Catwoman come with some stolen jewels or sidekick feline or….anything else?  i guess not… 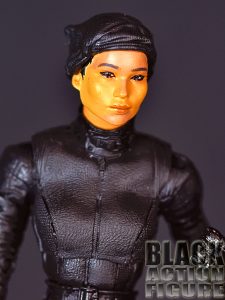 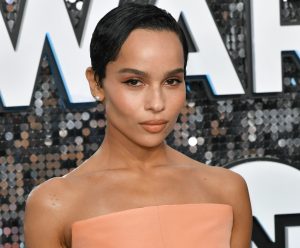 Let’s talk unmasked sculpt first.  I threw in a picture of Zoë for comparison.

Technically, the sculpt is pretty good.  It has all of the features of Zoë’s face…from her almond-shaped eyes, to her high cheekbones.  Where the figure goes wrong is the makeup.  First and foremost, this unmasked head has WAY too much eye shadow on. In the picture, you can see the figure’s right eye where in person, it kind of looks almost painted over in black to me.  The picture actually gave me a new perspective on the figure itself, because I was ready to tear it up. 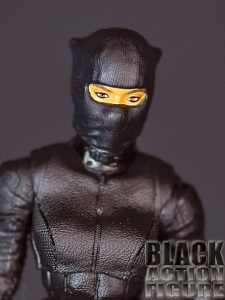 I honestly wish I were a good repainter.  You have probably seen people who have taken an existing figure, done some incredible hand-painting on it, and make it nearly indistinguishable from the person it’s supposed to be.  Naw, that’s not me (unfortunately).

Switching over to the masked head and…wait, the eyes look 1000% better!  Did unmasking this figure make her smear her eye shadow across her eyes? Or did McFarlane Toys printers just go a little overboard on one, and nearly dead on with the other?  I wish I knew the process better, and I wish there was some more quality control at the factory.  Maybe that unmasked head would have been worth the price for admission.

Both of the bodies are exactly the same, and both are made from the same black plastic.  The lack of detailing on either is pretty evident when everthing is black. I may have wanted to see some metal detailing here or there to accentuate, but that may have been too much to ask.

Sculpt/Likeness Score: 6 out of 10 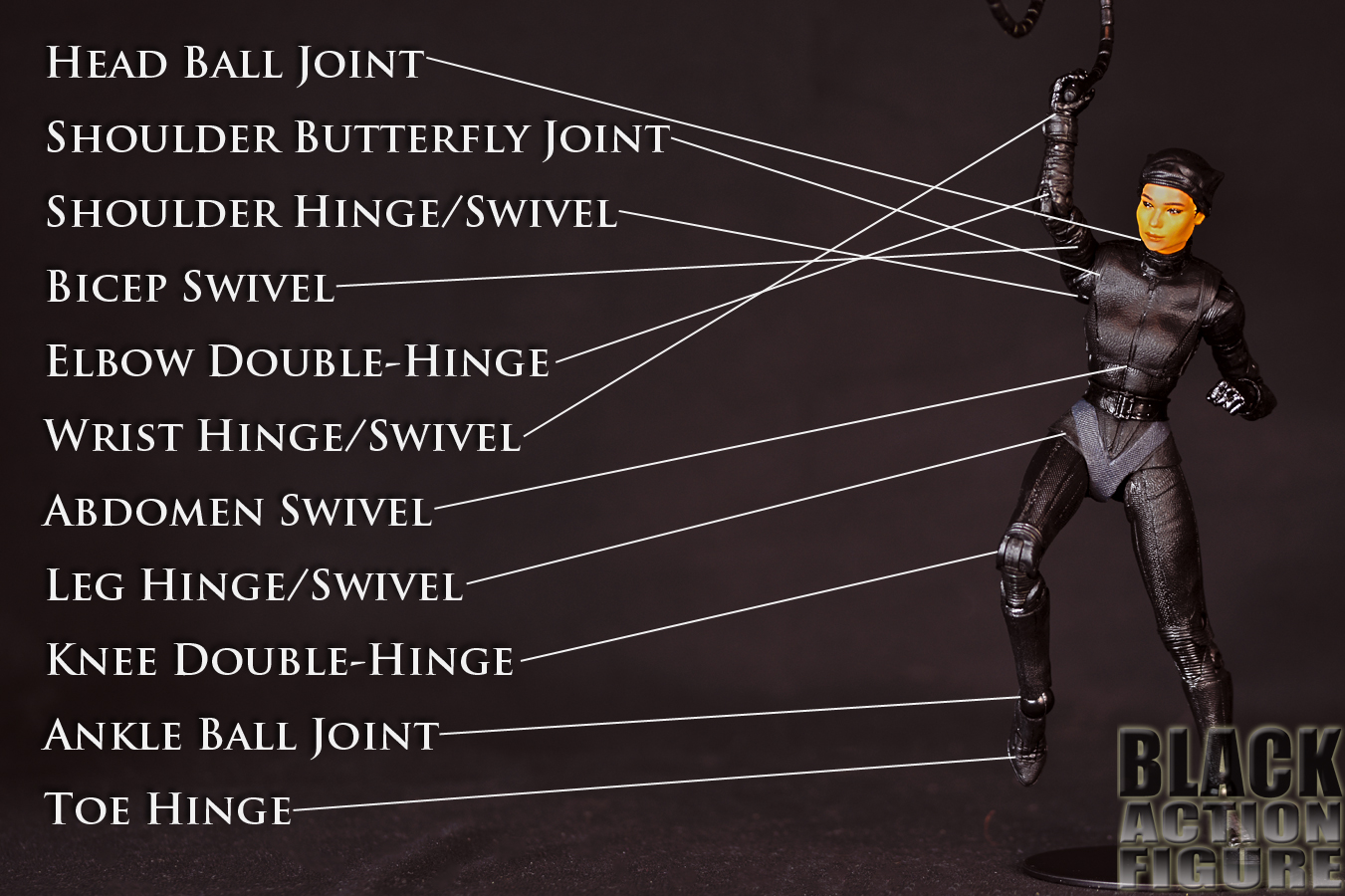 Believe it or not, I am shocked that this figure actually has about 32 points of articulation! I bet you’re thinking now “that’s as good as a Marvel Legend!”  But wait…because it still feels like a damn McFarlane Toys figure.

It’s almost like if someone tell you that a NECA figure has 30+ points of articulation, but you know it will still be a glorified statue.  This figure is not that bad, but I think what does it in for me is the lack of balance.  You will NEED that stand just to get the figure to do basic things like stand straight up and down.  Luckily, the stand is strong enough to do some more posing than normal.

The head is on a ball joint, so I like the fact that it can look up and down, but looking up is still limited.  I think an extra hinge would have put that over the top.  I also like the double-hinged elbows and knees.  Again, usually not seen outside of Hasbro, so kudos.

The thing I don’t like so much is the ankle ball joint.  The visible joint made posing the figure harder than it needed to be.  Add to that, you get a toe-hinge that flops up whenever you don’t want it to.  And I can’t even think when you would use it.

All-in-all, an above average experience, although I do believe McFarlane Toys has some engineering to work on.  Hopefully they can tool a good base body that would work for most or all of their figures. 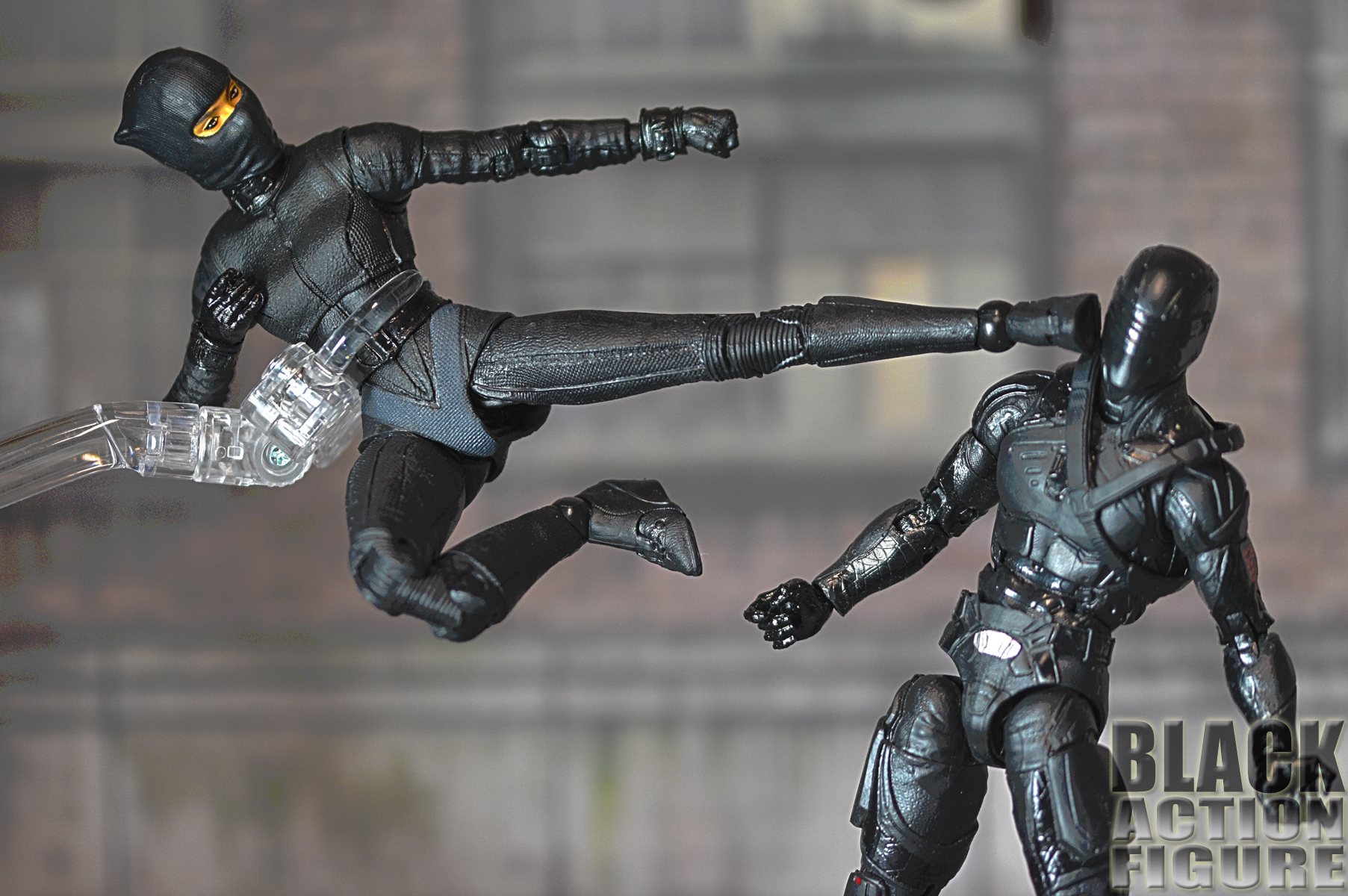 Another McFarlane Toys figure that I really wanted to like and ultimately do…kind of.  I think that the accessories are lazy and not just including one head sculpt with one figure is pure cash grab.  I would have respected if the company just made a “deluxe” figure and just include all sorts of accessories in for a little more of a premium price (which they have done before).

If you liked “The Batman”, then by all means, collect this figure.  It has potential to make a good display.  I purchased it because it was Zoë Kravitz…and possibly her first figure (even though she has been in several “figurable” movies).

I really hope that McFarlane continues to work on engineering their figures better.  If smaller companies like Valaverse can make figures that rival and in a lot of ways be better than Hasbro, then bigger companies like McFarlane Toys can do the same.