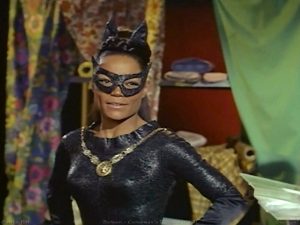 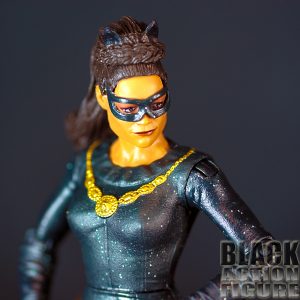 Let me start with this.  I am Team “Eartha Kitt” and I have been for years. I remember seeing her for the first time in Batman.  I got jealous when she was pushing up on Eddie Murphy in “Boomerang” because I wished it was me. And I completely mourned her death back in 2008.

I’m not going to lie, I’ve been waiting on an Eartha Kitt Catwoman for years.  Every time one gets close to production, something happens and it gets delayed or cancel.  My last order was for a 1/6 scale figure of Eartha Kitt produced by TBLeague that I have had on “preorder” for 6 years (it has since been cancelled).  I’m hoping that a third party 1/6 scale figure producer picks up the ball and runs with it because I would be the first in line to get it.

When McFarlane announced a 6″ Catwoman figure based on the classic 60’s Batman, I wondered if it was going to be Julie Newmar or Lee Meriwether. To my surprise, McFarlane hit us with the Eartha Kitt Catwoman, and I was the first person on Target to order one (okay two). Did McFarlane Toys deliver? Check it out… 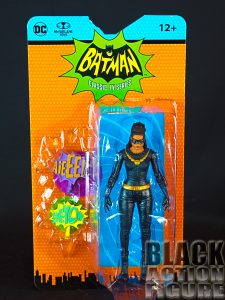 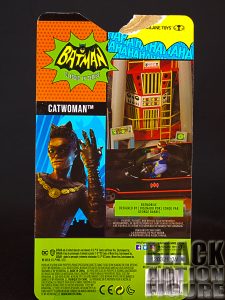 I don’t find anything spectacular about McFarlane Toys’ “Batman ’66” line. I enjoyed it as a kid as that was sometimes the only superhero television available to us…campy 60’s reruns.  But of course as an adult, I see it for the campiness it is.

I guess I say all of that to say while I appreciate the aesthetics of the packaging, the retro and campy feel to the package really doesn’t draw me in as much as the figure itself does.  I realize that packaging is a medium to get your figure to you in a semi-protective way, but I realize there is form and function sometimes to action figure packaging.  There are figures I have purchased just because the packaging has drawn me to it. This packaging immediately does the opposite for me.

The front is so damn lackluster. You get the Batman logo up along the top and….nearly nothing else. Nothing to signify who this character even is supposed to be. No information of any kind from the front.  Well, I guess it’s a DC product made by McFarlane Toys, but we already knew that going in. I guess they don’t really want to market to anyone outside of people familiar to the character.

It’s not until you look on the back that you even learn the character’s name (well, we all knew it was Catwoman, but what about the general masses?).  We get a single picture of the lovely Eartha Kitt as Catwoman and…again, that’s it. The rest is focused, or better yet, marketed towards other “Batman ’66” toys.

This packaging is such a major letdown that I don’t even mind, or care about the huge rip along the top (which is how I received it from Target). I knew I was going to take the figure out of that crappy packaging and the first trip was to the trash. 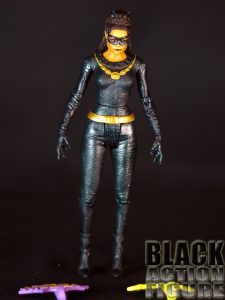 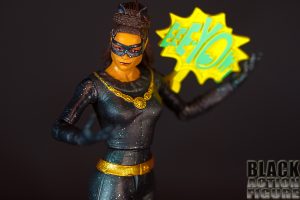 I think we all know by now that McFarlane Toys is a huge letdown when it comes to accessories. Accessories to me bring the character to life. What would we have if Snake-Eyes did come with an uzi and a katana?  Just some dude dressed in black.

Well in this case, we got some black woman dressed in black.  Catwoman has a whip…so where is that? Come on McFarlane, work with us here…

Instead, we get two campy onomatopoeia word signs, a product of the show itself.  And it hooks onto….the figure’s arm I guess?  I really couldn’t figure it out. It’s not like we got instructions or even a picture of how the McFarlane Toys would like for us to display this.

And it would be too much for McFarlane Toys to include an unmasked head in there.  You’ll see from an upcoming review what I think about that.

Lackluster accessories in a lackluster package that is making this figure review not fun, even considering that I’ve wanted something like this for a long time. 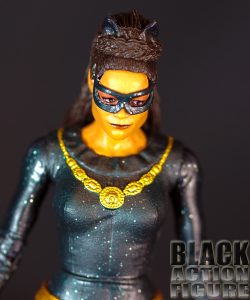 So how is the figure itself?!

Holding the figure in hand and looking down at it, I have to say it is a nice-looking figure. The sculpt is nice shape and does justice to the beautiful Eartha Kitt. The paint job on the suit with it’s black, glittery look, and the gold adornments on the suit including the necklace and belt are great.  From this view, you get the hints of the actress herself.

But then I zoom the camera in closer and I start to nitpick at some of the details. While there is some details in the cheekbones, they’re still not as distinctive or as high as the signature cheekbones on the actress herself, so I feel a little laziness in the facial details.  And really, what the hell is going on with her hair?! I know that she most likely wore a wig on the show, but it’s like they put a bird’s nest of hair on top of the figure’s head, then proceeded to have two cat ears protrude from it. What the bloody hell? You couldn’t do better than this?!

The upsetting part is that I believe McFarlane is using the same body for the upcoming Julie Newmar Catwoman figure, and I’m willing to bet that that figure’s sculpted hair won’t look as bad as this one’s hair does.

Lastly, the figure’s eyes are drawn to the left.  Why would I always want my figure looking left rather than just straight ahead? Why does the McFarlane Toys team continue to have eyes drawn to either the left or the right?  Makes me feel like their figures are always looking for something else better to do. 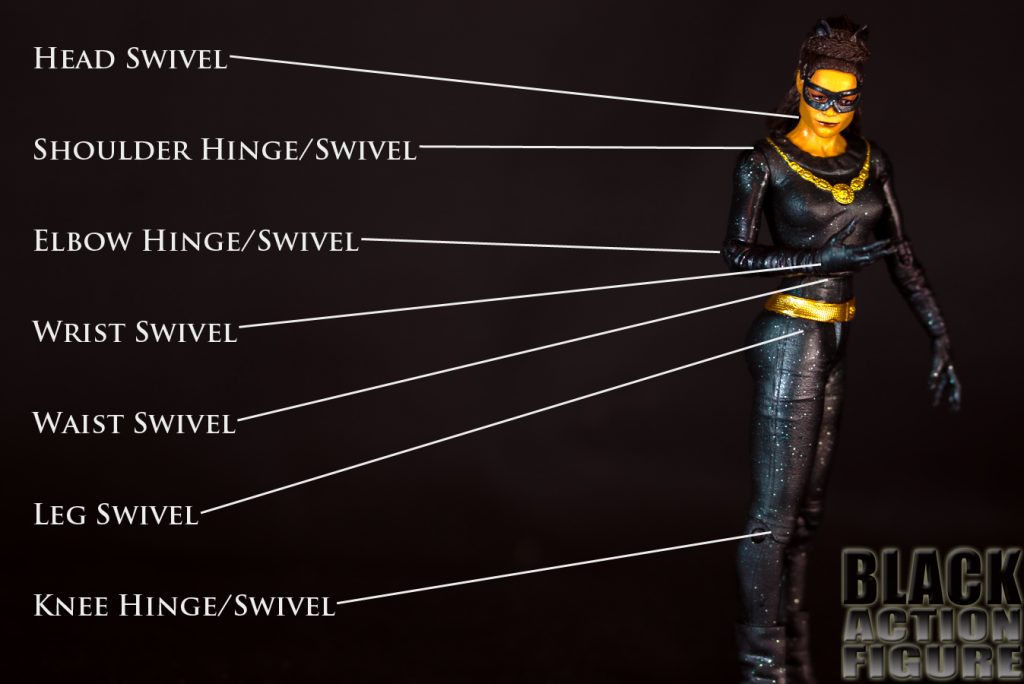 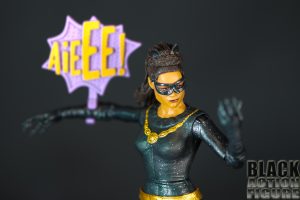 Let’s talk about balance. This figure has none. It took me literally 5-10 minutes to get the figure to stand straight up.  I then prayed as I swiftly and nimbly made my way over to behind the camera that it didn’t fall or I didn’t accidentally bump the table and make it fall.

I wanted to just then just rely on the peg hole on the bottom of the foot and just use a figure stand….except in McFarlane Toy’s overwhelming wisdom, they did not include any.  None.  So forget dynamic posing, you’ll be lucky to even stand this figure up on your shelf, even with poster-tac underneath each foot.

I just realized the onomatopoeia words that came with the figure correctly express the frustration I have with this whole figure. 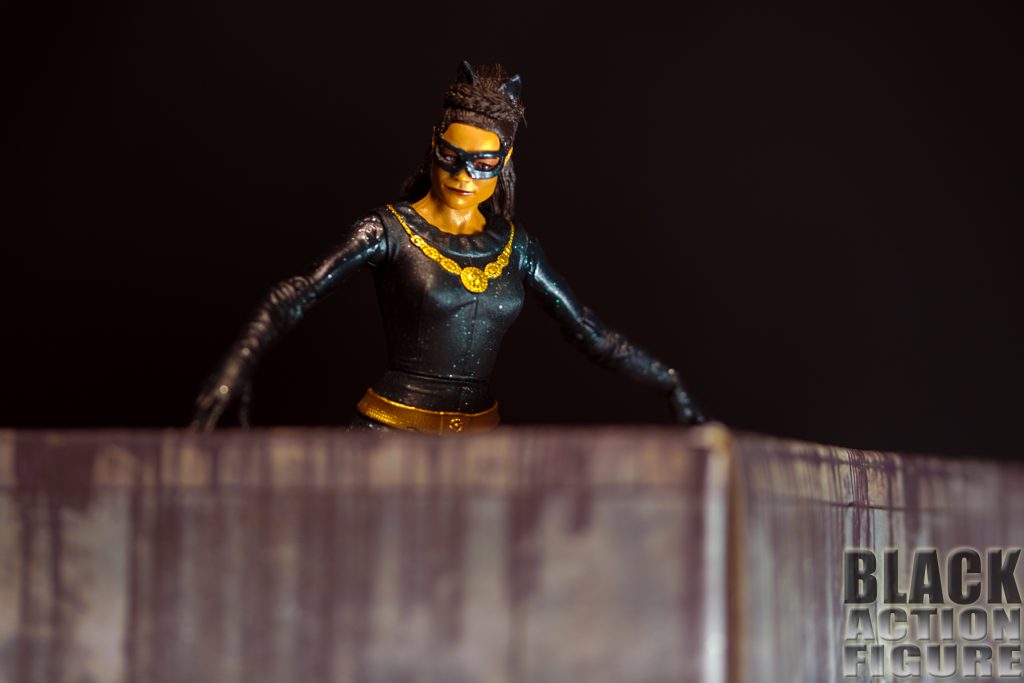 I really had some high hopes for this figure.  In my mind, I was going to photo the figure skulking across rooftops and maybe busting into a window or something. Let me say that I was lucky enough to just get the figure to stand on the roof of a model building, and that was with the hands balancing on the ledge.

So I say, “Thank you Todd McFarlane, for bring us an Eartha Kitt action figure!” in the same breath as I say “Now please literally ANYONE ELSE please bring us another one and make it decent!”

There are tons of third party Chinese companies making unlicensed figures.  And while I would want her estate to get the residuals of anything featuring her likeness, I just really want a decent figure to put on my shelf.  I hope someone out there is up for the challenge!

NOTE: Just remembered I also own the Eartha Kitt Catwoman MEGO figure. While it is vastly superior to this one, it is still….a MEGO figure.  So still hoping…