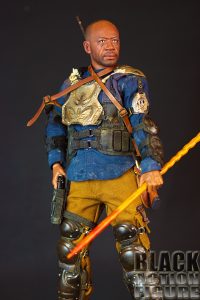 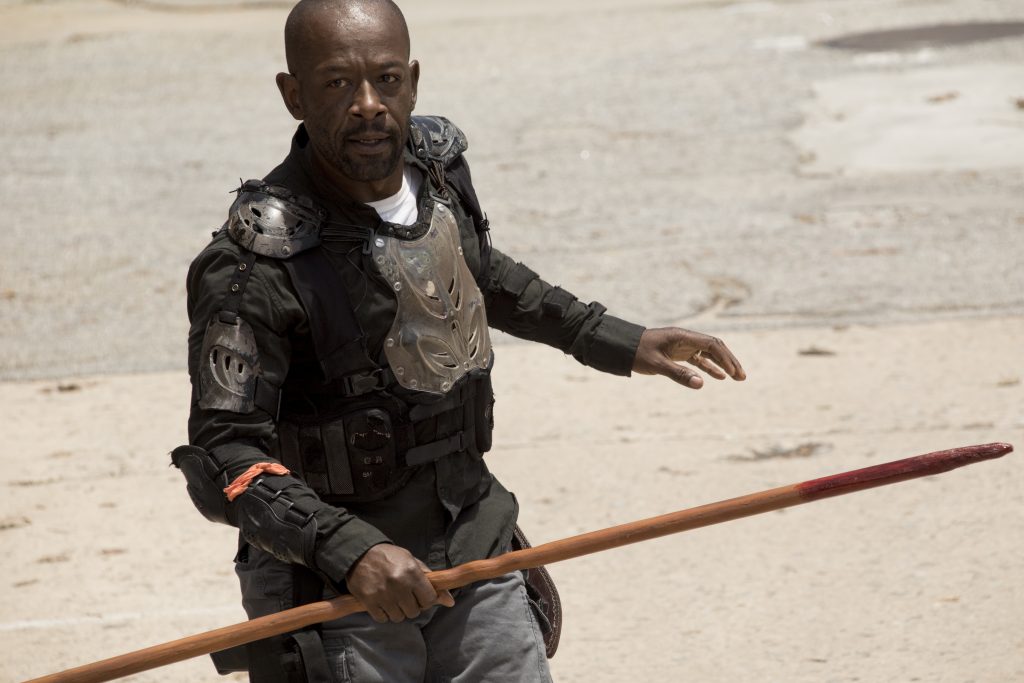 I don’t know why it takes me so long to do reviews on 1/6 scale figures.  I have to say that I have done the photo shoot on this one nearly a month ago, but I have sat on it, maybe letting it marinate in my head on what I want to say about it.

When I first picked this out for my review, “Fear The Walking Dead” had just started back on the second half of their seventh season.  This review was to correspond with that.  But then, you know, life happened and I kept putting it off.  Now we’re nearing the end of the season…and I guess it’s still significant.  Morgan has only shown up a handful of times and the show feels really disjointed now, but that has more to do with the character than the figure.

To speak on the character, Morgan Jones has pretty much been around since the very beginning of the show.  He initially found Rick Grimes and brought him up to speed on the whole “zombie apocalypse” thing.  He’s bounced around a few seasons before becoming a regular on the show.  A few years ago, Morgan made the transition to the spin-off show, “Fear The Walking Dead” as they went in a whole new direction, and for the most part has been well received.

While I love the show and I loved the comic book, the premise is getting pretty stale.  I may have been all in on a ThreeZero TWD line years ago, but now my waning interest for it makes it easy to cherry pick just the figures I want.  To be honest, ThreeZero’s release schedule kind of sucks.  They are still putting out Game of Thrones figures years after the show has ended.  I can only imagine the same is going to happen with TWD.  But I now have this figure in hand, so let’s check out and see if after twelve years of a popular show, it’s still worth it to collect… 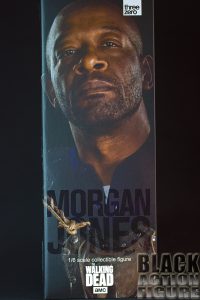 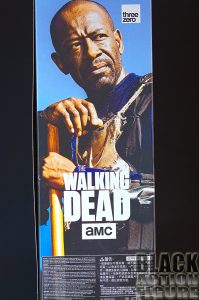 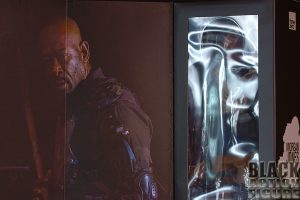 I actually am pretty impress how ThreeZero manages to fit figure and accessories in a box that is about half the size of everyone else’s boxes. It doesn’t look like much from the outside, but when you open it up I was amazed on how everything fit in there.

The front and back of the box features pictures of actor Lennie James as Morgan Jones rather than the actual figure itself.  I find that a little divisive.  Yes, we are paying premium dollars to get a figure that looks like him so yes, put him on the box.  But also maybe put the figure on the box.

The front is actually a magnetic closure door, and when opened you get….yes, another picture of Lennie James, but then you also get your first look at the figure….kind of.  The figure itself inside the box is covered in protective plastic so it’s hard to get a good look at it, so yes, you will have to open the box and remove the plastic off the figure if you would even like to see what you’re purchasing.  As you may well know, I’m okay with that.  It’s the “Mint-In-Box” collectors who may be put off by this.  If that box never opens, your enjoyment of the figure may just rely on other posted pictures of the internet.

So yes, impressed on the compact size fitting so much inside, but nothing discerning what’s inside outside something that may look like the three various pictures of actor Lennie James. 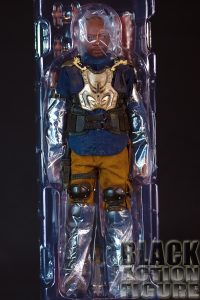 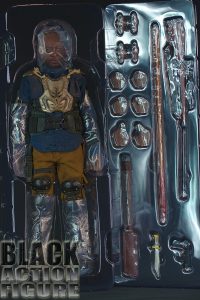 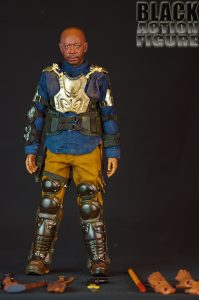 I included some pics of the packaging just to let you see how well they fit everything in there.  All in all, I’m pretty pleased with the amount and significance of accessories that come with this figure.

You get 3 extra sets of hands, staff, staff holster, rifle, rifle holster, semi-automatic pistol, knife, and additional wrist pins.  Not to mention the draw of most 1/6 scale figures which is the soft goods (and in this case molded armor) that is theoretically removable.

The only thing noticeably missing is a figure stand.  I think most 1/6 scale figures get a customized (or sometimes not-so-customized) figure stand inside.  But to date, I don’t I’ve ever received a figure stand with a ThreeZero 1/6 scale figure. Which is probably how they are able to save so much in the packaging realm.  Is this necessary?  The figure stands on its’ own okay and has been on my shelf undisturbed for the past month or so (knock on wood).  I have refrained from even using so many stands with my 1/6 scale figures so I’m cool with it…for now. 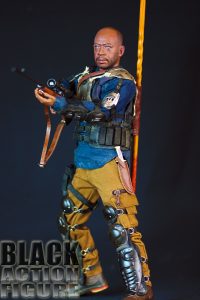 I am pretty pleased with the likeness of the figure to Morgan Jones in the show.  While there is a stiffness to the figure that sometimes messes up the illusion that this is just a mini-Morgan Jones, there are certain angles that when you see it, you can’t unsee the fact that this is a near dead-on likeness for actor Lennie James.

The outfit is reminiscent of his time on The Walking Dead, and while his staff has been a big thing, I think in season six of Fear the Walking Dead introduced an axe (which he took from an assassin who was trying to kill him).  We unfortunately don’t get that, but that doesn’t take away from the fact that this could be Morgan Jones from TWD or Morgan Jones from FtWD pretty interchangeably.

While it may be the HDR of my photos, his clothes seem a little too colorful rather than the dingy, dirt-covered clothing of most of the main cast.  This may very well be the colors he wears, but all I can think about is the dirt and dust covered clothes he wears and if you ask me what color his shirt is in the show, I wouldn’t say blue….I would have probably have said brown.

The end of his staff is even covered in the blood of the dead that he has numerously killed with it.  Attention to details like that is what sells figures.

My only gripe? The sculptors have set his eyes looking to the side…which means you can only get good shots from his left side…if you try to take pics from his right side, it looks very off because of the figure’s inability to face the camera. It may seem like a small thing but it gets to be important when you’re taking pictures of a figure.

A point of contention that I would like to mention in this section is the looseness of this figure’s wrist joints.  While the hands and wrist joints are made to be removable and interchangeable, there is a looseness here that causes the figure’s hands to just fall out of the socket.  Making basic articulation and posing very hard, especially when posing with weapons.  You get one hand right and as you’re working on the other hand, the first hand has popped out of the joint.  Made for some frustrating photos, but I got through it…barely. 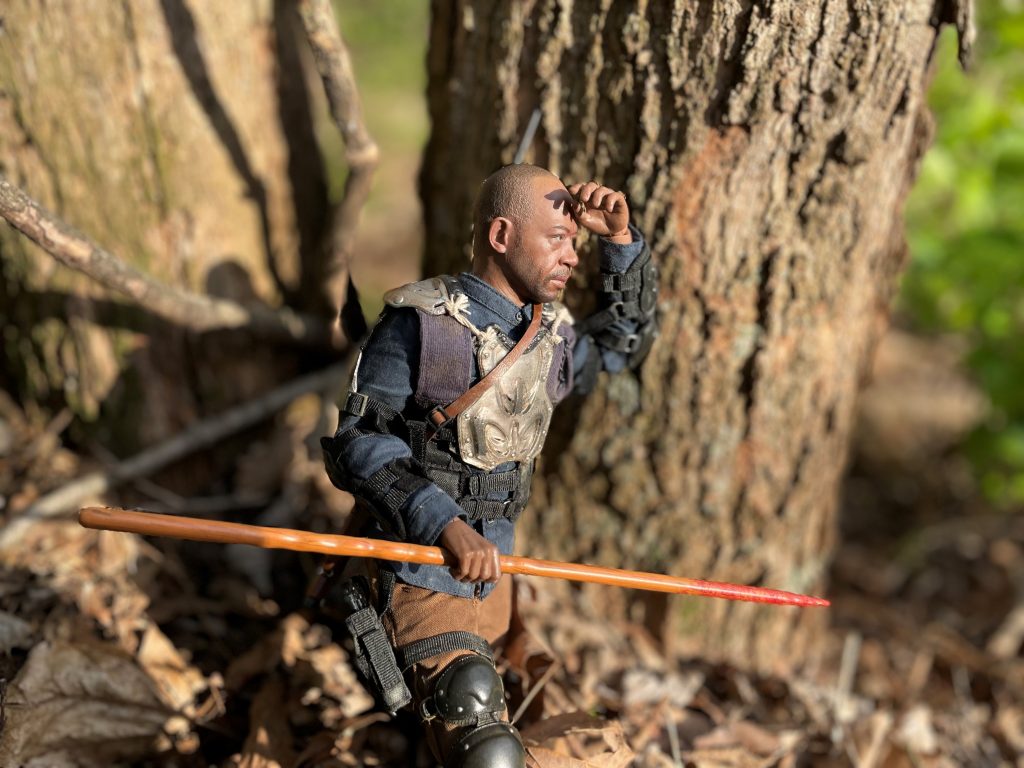 Going into this review, I was pretty excited about this figure.  I actually have got this and King Ezekiel at the same time and I was pretty excited for both.  And while the quality was there, the hands falling out of the joint thing really bothered me.  It downgraded this figure to just get the one sculpt right so you can pose him on the shelf and forget about him instead of move him around when you get the notion to do so.

In general, “The Walking Dead” series is beginning (or has been for a while) starting to feel a little stale.  Even creator Robert Kirkman has ended the comic book series run.  The main series has broken up the last season to three different parts.  There is still at least another season of “Fear the Walking Dead” coming.  There have been talks of another spinoff with Carol and Darryl. And of course the oft-mentioned Rick Grimes movies are still being talked about. So there is plenty of Walking Dead left.  With that said, owning this figure doesn’t make me feel as empty as my Game of Thrones collection does, especially with that weak ending.  Here’s hoping that The Walking Dead can stick their landing….whenever that may be.