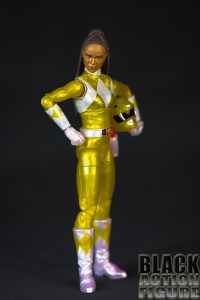 It’s been nearly 30 years since the start of the Power Rangers (unbelievably).  I remember my little brother watching this on TV when I got home and thinking to myself “so this is the stuff that kids watch these days.”  I remember thinking that the show was….a little racist.  I mean, why does the Black Ranger have to be Black and the Yellow Ranger have to be Asian…isn’t that just too on the nose?

It was the early 90’s but by the mid-90’s, I think Fox caught on.  Two seasons later and they switched it up a little.  They brought on Karan Ashley to play Yellow Ranger Aisha Campbell on the show.  And while I liked the Asian Yellow Ranger Trini, there was something about Aisha that didn’t necessarily make me a Power Rangers convert, but if it was on, I wouldn’t turn off the TV.  I think she definitely had more charisma and character than the girl she replaced.

Now I never thought that I would ever own a Power Rangers action figure.  Bandai had the license to make the figures for 25 years, but I always thought they were trash and they never did decent enough head sculpts even when they did do them (which wasn’t a lot).  But when Hasbro took over in 2019, I thought that this would have potential.  Hasbro definitely has the articulation that I like and even the photo-real headsculpt process that they use on stuff like their Star Wars and Marvel movie figures.  Let’s check out what I thought about my first (and possibly last and only) Power Rangers figure… 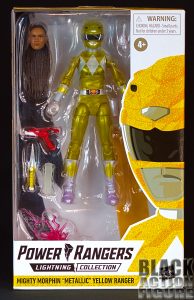 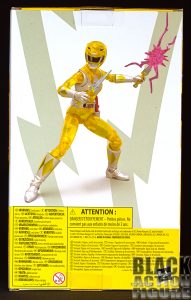 There is no big “aha” moment when it comes to the packaging.  I mean, we’ve seen variations of this type of packaging coming out of the Hasbro camp for years.  I would say the surprising thing about the packaging is that it is rectangular like their GI Joe line as opposed to the angular packaging of their Star Wars line or the curvature added to their Marvel Legends figures.

This figure being part of their Hasbro Pulse exclusives, we get a nice glittery/metallic look to the printed Yellow Ranger on the packaging, giving it a more exclusive feel than the figures you find in regular retail stores.

The exposed window gives us a good look at the Metallic Yellow Ranger along with the accessories. To note, there are so many accessories that come with this figure that some of them are obscured by the packaging and some are completely behind it.

The back is also another departure for Hasbro.  Normally I would see an illustrated picture of the character on the back, but instead I find a picture of the actual figure in an action pose. What I find a little weird is that there is no type of “bio-blurb” at all.  Nothing identifying this character as Aisha Campbell or anything.  This line is definitely for fans of the show who already know what’s up and they were going to buy one or more of this figure anyway.

With the deco, this figure packaging would look nice on the shelf for those that don’t open their figures and it is collector friendly so even if you open it, you can place it back in the packaging. 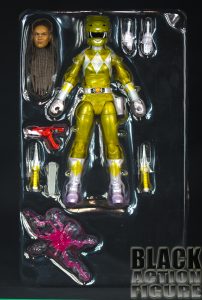 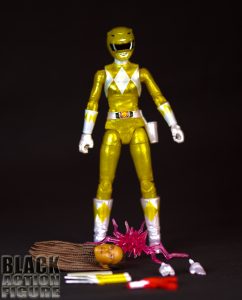 As I mentioned, this comes with a lot of nice accessories.  First and foremost, I bought this because it included a beautifully sculpted head of Aisha (played by actress Karan Ashley).  We don’t get a lot of nice Black female head sculpts normally and when I see a figure with one, I like to pick it up regardless if I’m a fan or not.

This figure also comes with another pair of hands (gun shooting right hand and saluting/karate chopping left hand), a laser pistol, two daggers, an energy effect for the daggers, and a crystal.

Not being familiar with the Power Rangers lore, I had no clue that the clear-ish piece of plastic was supposed to be a crystal. I at first thought it was a holster for the daggers.  I had to read another review just to fill me in on it.  It would be nice if Hasbro put in some type of info sheet outlining this stuff.

While I’m sure this stuff is show-accurate, the daggers come off looking kind of “cheap” to me.  They fit fine in the hands, but I felt they were kind of cartoony rather than indicative of a battle-ready warrior. There is also no where to put them when you take them out of her hands.

My main focus was the head sculpt.  I may eventually find myself just taking the head and using it elsewhere, like on the upcoming Marvel Legends Maria Hill/Quake figure to make a Black Agent of Shield figure. 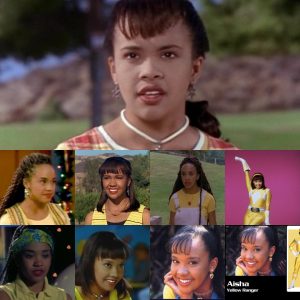 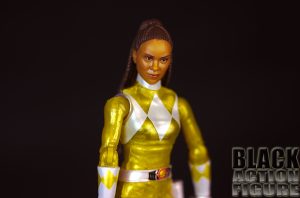 Okay, we’re coming up to what I think it’s going to be a harder category for me….”likeness” as compared to the actual “sculpt”.

Like any respectable young Black woman, Aisha’s hairstyle (unlike Trini’s) changed about 30 times throughout the show. Now I know that is a slight exaggeration, but you can take a look at the picture I included to the right to see that her hair has seen some changes.

The representation we get with this figure is her season 3 look of when Aisha had braids.  A huge step up from the original figure from the Yellow Ranger two pack where she had shorter hair with her hair pulled back and placed in a yellow scrunchy.

Like I said last time, the head sculpt included with this figure is a lot more versatile and can be used in customs.  I don’t think her original hairstyle will be able to do that with any type of real credibility.

The photo real process worked well enough to be able to make out her features. It’s no Hot Toy, but for a $25 figure, it will do.

I do have another main problem with the sculpt.  Karan Ashley, as gorgeous as she is, is only 5’1″ and she has a little…”thickness” (for lack of a better term)….to her that of course does not come out in this figure. If the proportions of this figure were accurate, this person would be about 5’6″-5’8″ and does not have the right curvature as the beautiful Ms. Ashley.  In all essence, they took her head sculpt and stuck it on a generic Power Rangers body.  I would have had more respect for Hasbro if they were more appropriately accurate with this figure.

At any rate, the “metallic” feature is nice and differentiates it enough away from the flat yellow of the other figure.  Again, does not really matter that much to me, but it looks nice. 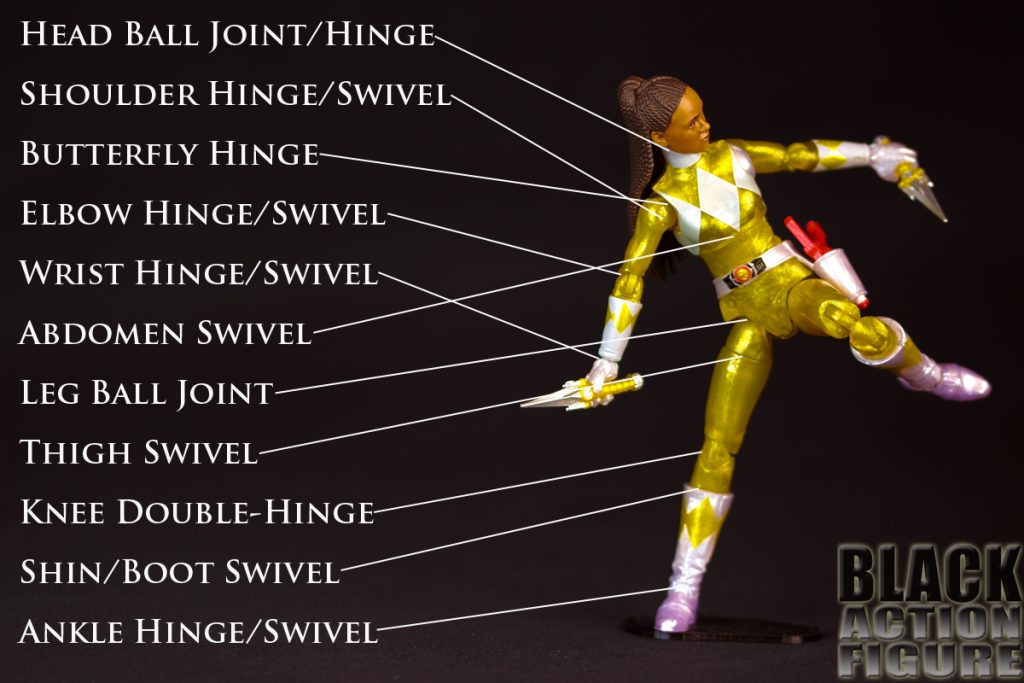 While seemingly not as much as other Hasbro figures, this figure does include well into the “30” range of other figures with 32 points of articulation by my count.  I have to note that where I listed “Abdomen Swivel”, that is incorrect…I should have listed it as a “Midriff Swivel” and this figure also has an “Abdomen Hinge” allowing it to bend backward or crunch forward.

You do see more of a range in the head area when the helmet is on.  When the Aisha head sculpt is on, the hair while awesomely sculpted, is a deterrent to some articulation.  The belt accessory also blocks some range in articulation.

Noticeably missing is also double-hinged elbows which would allow more range in arm bending.  There is good balance to the figure but it feels like that is more because of a lack of substance to it rather than good engineering. 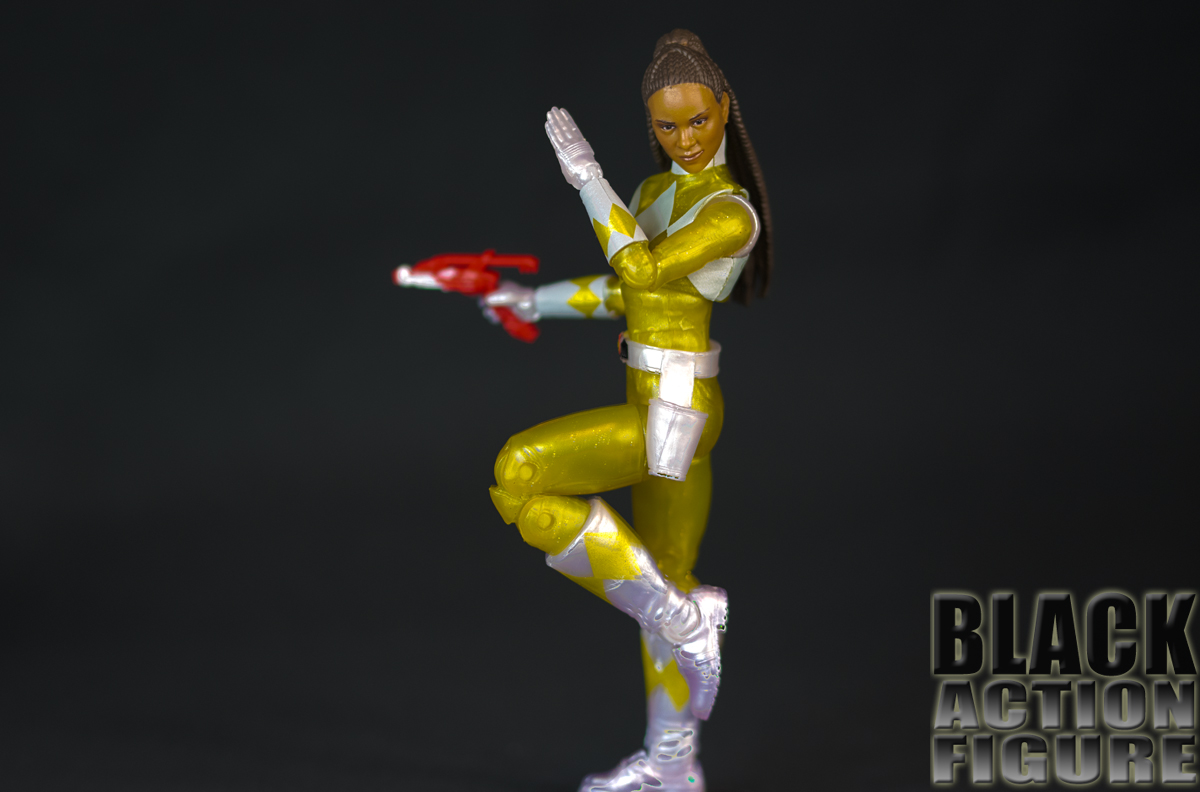 I really wanted the next figure I reviewed to be a Black female. I feel our Black females are seriously under-represented in the action figure world.  Even when there is a popular Black female character, I feel like we have to wait for the focus groups to kick in before we get them in figure form.

Marvel Legends Black Panther is a good example of this.  We had to get Okoye as a “Build-A-Figure” instead of in a single pack.  We had to wait until the second Black Panther to army build our Dora Milaje.  And then we had to wait a year after that in a later “Avengers: Infinity War” wave to even get a decent Shuri figure.

I like to celebrate when we get a good figure of a Black female.  While this figure was not necessarily “body accurate”, Hasbro did get the head right and I celebrate them for that.