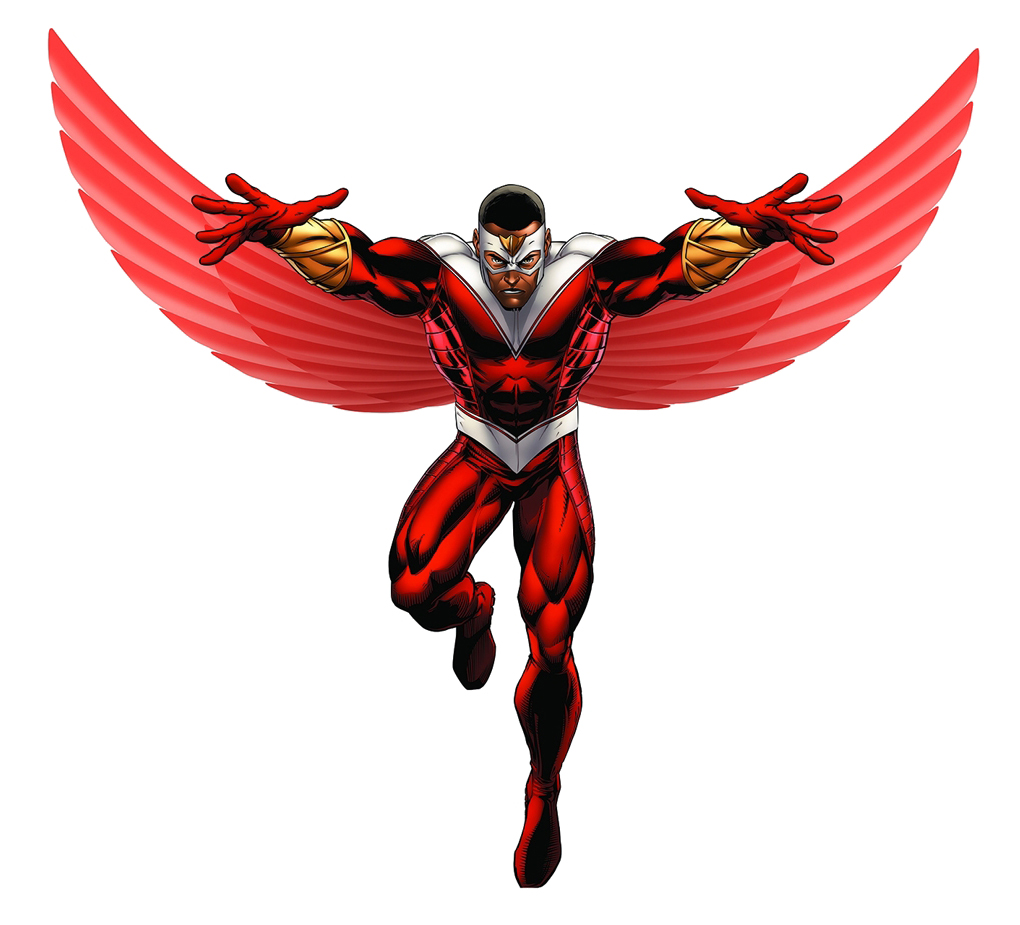 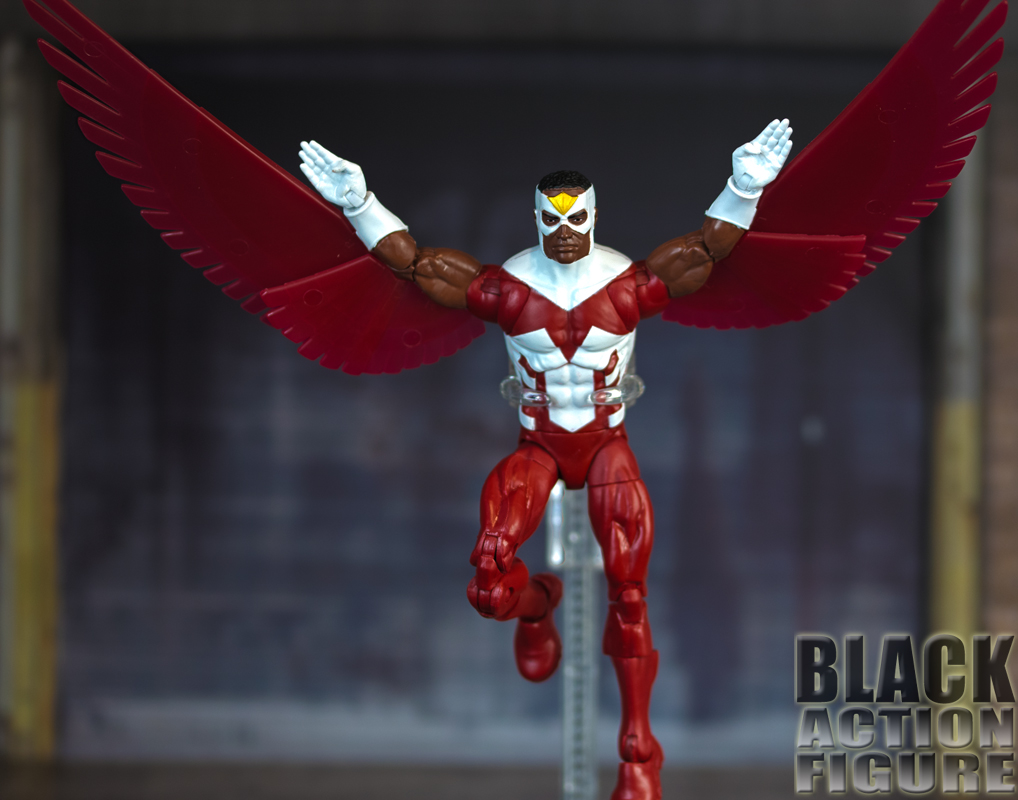 Let’s get this part over with…yes, it has been a year and a half since my last review.  The Pandemic was (is?) happening, I was busy working my regular job at home, and I also was handling a number of new things including caring for the kids after school (wanted to save some money from “after” care).  On top of all that, my “work area” in our basement was displaced due to construction.  All of that kind of zapped my ability (and sometimes will) to keep this up, even after 8 years.

Fast forward to today…I have a new work area, a new photo area (have to reteach myself how to take photos again, haha) and a ever growing backlog of wonderful Black action figures that seemingly (or in actuality) grows every day.

I decided to start with a 6″ Marvel Legends Falcon action figure, since it was the 3.75″ Marvel Universe figure back in 2011 inspired me to start this blog.  Back then Falcon wasn’t as popular back then. Fast forward to today and after numerous movies (“Captain America: Winter Soldier”, “Captain America: Civil War”, “Avengers: Infinity War”, “Avengers: Endgame”) and a pretty popular Disney+ TV series (“Falcon and the Winter Soldier”), not to mention actually becoming Captain America in the comic books and the MCU, Falcon’s popularity is pretty high. I think nowadays, it’s pretty hard for them to keep Falcon action figures on store shelves (instead of the peg warmer he was ten years ago).

This figure is actually a classic repaint of the Falcon figure that came in the “Joe Fixit” Build-A-Figure wave that came out in December 2020. And while if you look hard enough, you can still find that figure for close to retail, it’s nice to have a classic Falcon on a Toy Biz lookalike card back.  Let’s check out the figure to see how it stacks up… 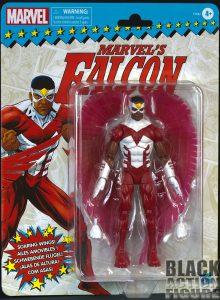 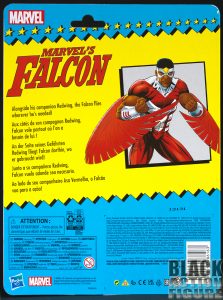 There are those of us who are old enough to remember the heyday of the ToyBiz era. Those 5″ pieces of Marvel goodness were a welcome part of my collecting life.  Curious enough, I don’t think ToyBiz even released a 5″ Falcon figure…instead they first released Falcon surprisingly enough as part of the original 6″ Marvel Legends line.  Just to be nostalgic for a moment, can you believe that the original price of a Marvel Legend from my earliest memories was $7.99?!

Price and nostalgia aside, we finally get a “ToyBiz-esque” card back, complete with retro look and Falcon artwork.  Honestly, it would have been nice if this was more based on an actual ToyBiz figure that existed, but I’ll take it.  The front even highlights his wings in 5 different languages! (English, French, German, Spanish and Portuguese)

On the back, we get the quickest of bio-blurbs.  Interestingly enough, they mention his companion, Redwing…but no Redwing figure came with this figure (more on that in the accessories)!  Again, we get those same 5 languages, reminiscent of ToyBiz (and Hasbro for that matter) taking the same figure and packaging and shipping to multiple countries.

I like that the card backing is of a solid cardboard material, making bended corners and plastic bubble falling off even harder.  Unfortunately, since there is no easy way to get these figures from the card, you may have to cut your way in…meaning if you want to display the card too, you almost have to buy two.  But that’s a win win for Hasbro and another $25 from your pocket, so if you can, maybe pick up the first Falcon to open and display, and keep this in the packaging to place on your wall. 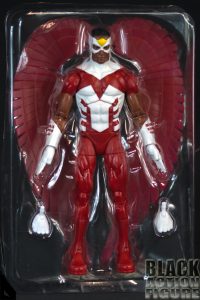 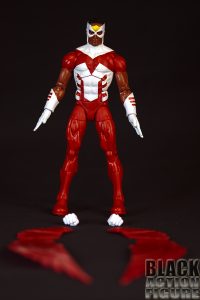 Let’s start off with the easy part…you can’t have a Falcon figure without wings (even though Hasbro HAS made a comic version Captain America Falcon without wings, but I digress).

The wings come in four pieces, two pieces for each arm.  They easily snap into the designated hole on the upper arm and forearm.  At first, thinking back on the original Marvel Universe figure, the wings were all one piece for each arm, and while they snapped into the arm okay, they just as conveniently popped back out too as soon as you moved the figure…or sometimes even if you don’t.

Whether it’s the larger form factor or re-engineering, the wings mostly stay snapped in and snugged onto the arms.  The two piece wings per arm allow for greater range of articulation when posing.

The figure also comes with an extra pair of fisted hands.  Conveniently missing are hands that can grab or hold something, so I may need to repurpose hands from another figure if this is what I eventually want this figure to do.

And now the main problem…how the hell are you going to give us a Falcon figure with no Redwing?! Do you give us Captain America without his shield or Thor without Mjolnir?  Going back to the original ToyBiz figure (which I have stashed away somewhere), again for $8, we got a super-articulated Falcon figure WITH a semi-articulated Redwing figure. But for $25, I guess plastic just costs too damn much.  I forgave them on the last Falcon figure because we got a Hulk “Joe Fixit” Build-A-Figure piece….but now, what is their excuse? 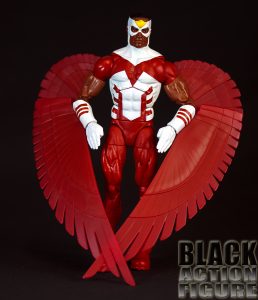 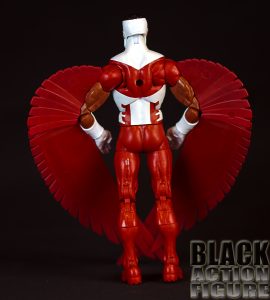 I did a Google search to see if I could find this iteration of costume.  I did happen to find one on a comic-book cover, but if I were to do a deeper dive, I’m sure one would present itself.  Falcon has so many different combinations to his Red and White look, I could repaint this figure, draw a random design, and I’m sure there is an artist out there who has already used it.

While this is a classic look, it is not his first “classic” look with his chest hanging out.  Like Black Lightning or Luke Cage, the Falcon’s first classic look back in the 1970’s made it look like he just stepped out of a disco.  Luckily, his suits are a little more respectable nowadays.

Paint apps, while basic, are pretty clean.  If I had a complaint about anything it would be that it they seem to have sculpted only one side of his wings.  While you can see the sculpting on the other side because of the translucency, it would have been a lot better if the design continued onto the back. 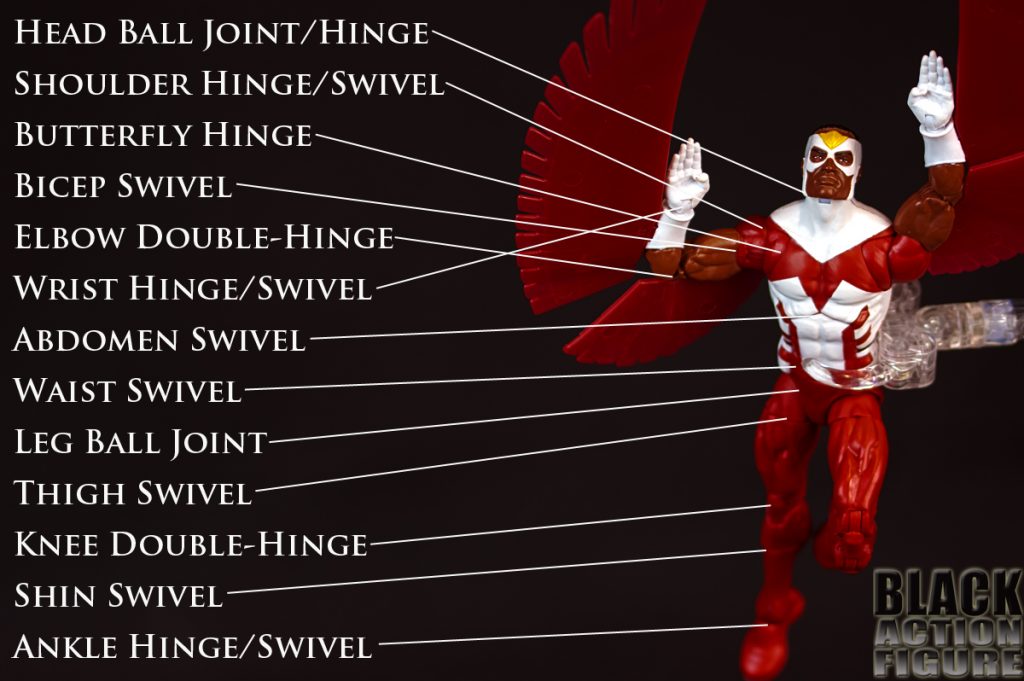 Like most Marvel Legend figures, this figure is loaded with articulation.  By my count, I have around 34 points of articulation.  If you have read any of my previous reviews, you know I love a neck hinge, allowing the figure (especially “flyers”) to bring their head all the way back or most of the way down.

Other thing I like to note is me FINALLY learning the proper term for that extra shoulder articulation, commonly referred to as “butterfly” shoulder.  This is becoming more common on Hasbro figures…it used to be only Spider-Man, but now I see it on almost all Marvel and GI Joe Classified figures.

The articulation feels fluid and not forced.  There are figures (McFarlane Toys comes to mind) where I feel like they should have good articulation, but it feels like you’re almost forcing the figure into a pose. But not with this figure.  My appreciation of Hasbro figures continues to grow and I’m glad that it continues to be an important part of their features, especially as they scale back in other areas. 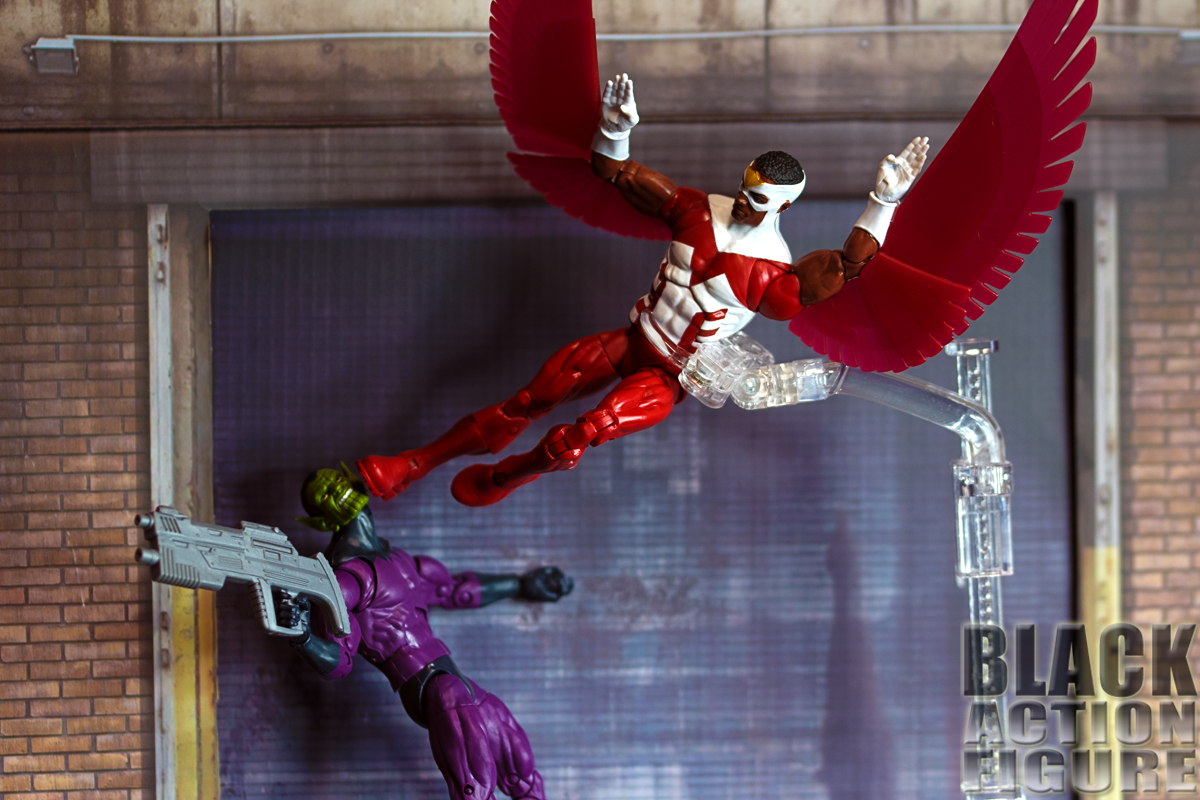 I think it’s serendipitous that my return to my blog after a year and a half would be to review the same character that made me start this blog in the first place.  Falcon to me is up there in the Black hero pantheon along with Black Panther, Luke Cage, and John Stewart Green Lantern. He’s been a solid comic book and movie character that only gets better with time.

I hope that everyone gets a chance to collect one of these figures. This has actually been one of my favorite action figure experiences lately.  I’m still made about them not including a Redwing figure ALONG WITH increasing the price of a basic figure.

We are actually coming to the point where this hobby may implode on itself.  Numerous delays due to the increasing issues of the supply chain along with increased costs of materials and general inflation of nearly ever single basic need (food, utilities, gasoline) will soon cause many to bow out.  Let’s all enjoy this ride while we can!

(These are affiliate links; I get commissions for purchases made through the links in this post to help support this website and keep it free)