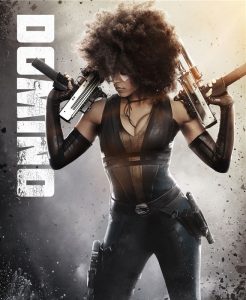 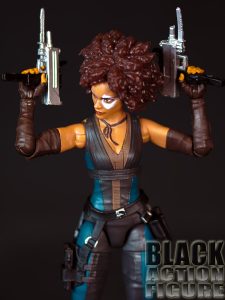 When Disney bought Fox, the Marvel properties that Fox owned came with the deal. This included the Fantastic Four, X-Men, and of course Deadpool.  Since Disney has close ties with toymaker Hasbro, most of the Fox Marvel properties never really got plastic representation…but now that Disney and Fox are one big happy family, let’s bring on the action figures!

“But aren’t these figures too late to the game?” Yes and no. You see, most of these never got made even though collectors wanted them. Even with the obscene success of Deadpool (and the moderate success of most of the X-Men movies), Hasbro had their hands tied behind their backs. So while it’s two years too late, I finally got my hands on Domino from Deadpool 2 played by actress Zazie Beetz.

Just a quick note on Zazie…she got most of the Black audience’s attention playing Donald Glover’s baby mama in the hit critically-acclaimed TV show, “Atlanta”.  She got most of the White audience’s attention playing Joker’s love interest in Joaquin Phoenix’s critically-acclaimed “Joker”. In between all of that, she popped in a little known movie called “Deadpool 2” which grossed $785+ million worldwide…whatever she does, she definitely does it big. Now we have the first (but I’m sure not the last) Zazie Beetz action figure…does it do her beauty and her talent any justification? Check it out… 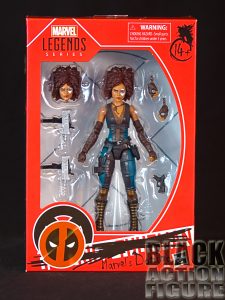 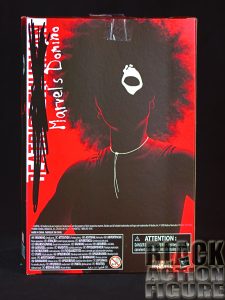 Let’s talk about this box! With a new, untraditional set of figures comes new packaging!

This packaging is geared for collecting more than the regular Marvel Legends figures. We get a cuboid box with no curved edges anywhere…it’s been a while since a Marvel Legends box was non-curvy. Instead of opening from the right or left sides, you now have to option of opening from the top or the bottom…take out the figure, check it out, then place it back to collect dust…do with it as you will.

Being a “Deadpool” figure, you know the packaging is prone to somewhat-forced shenanigans. On the front of the box, some “clever” editing has taken place. The X-Men logo is covered with a slightly creased Deadpool logo. Domino’s real name, “Beatrice Thurman” was scratched out and along the bottom we get written in what I assume is supposed to be Deadpool’s handwriting, “Marvel’s Domino”. Lastly, we even get the normal “Ages 4+” scratched out in the upper right hand corner only to be replaced with a “14+” written in. Hasbro is really playing up this seemingly mayhem.

On the back, we get a nice big silhouette of the Domino character (the same silhouette can also be seen on the sides). Again we get some quick editing to the “Beatrice Thurman” name with “Marvel’s Domino” written in. As much as I would maybe like to see the figure on the back, I have to say I don’t hate this. Very clever on all fronts. I guess they have to justify the $5 price increase on action figures somewhere…yes, the retail on 6″ Marvel Legends is starting to creep up to $25/figure (I still remember in the Toy Biz days when they were $8). 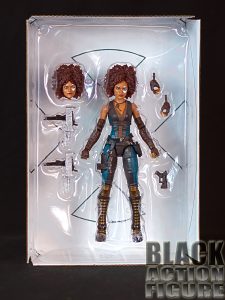 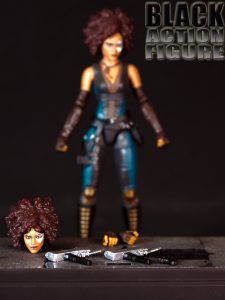 To once again justify the $25 price increase for this figure, opening and sliding the figure out reveals a bevy of accessories that come with it.  We get an extra head with a different expression and sculpted in goggle’s on top, two bladed uzi machine guns, a smaller pistol, and an extra pair of gun-holding hands.

Since this is figure is meant for collector’s 14+, Hasbro did not include in any blasters. No y’all, this figure has GUNS! The uzi machine guns are even accurate to the weapons she carries in the movie. She also gets a smaller pistol which fits snugly in the holster on the side. The guns were casted in black plastic and painted partially silver.

The second head (with the goggles) features a slight smile expression. Use of course at your discretion.

While I always enjoy the additional headsculpt, they are actually a little too similar.  I wish they could have been a little more different, but I can see customizers rejoicing because it’s not often you can get a black woman headsculpt with natural hair. Aiight, big ups to the sculptors, I always feel like they have a challenge when it comes to black women. How well did they do sculpt wise?

Let’s start with the hair. Black hair is sometimes difficult for non-Black sculptors to get right, but in this case, they did a good job representing the natural fro of Domino.

The face is always the important part. Does this figure look like Zazie Beetz?  To me the answer is…kind of. They technically got the shape of the head correct but then I look in the eyes. The shape of the eyes are wrong…where Zazie’s eyes curve up, the figure’s eyes curve down, if that makes any sense to you at all.

Finishing off, good paint apps and definition of detail in the costume.

Don’t get me wrong, this is a beautiful figure, just not sure if it screams Zazie Beetz or just kind of whispers it… Also missing is a hinge in the neck that allows greater articulation of up and down movement in the head.  This figure can look slightly up and even a little more down, but not as much as if they put a hinge in the neck.  I assume they didn’t do it because they anticipated that the hair would cause articulation blockage anyway and the figure couldn’t benefit from such.

Speaking of blockage, the holster is connected to both the waist and the leg, so I guess this would count as “costume blockage” not allowing the complete articulation of the right leg.

Overall, I got this figure into some decent poses and the center of gravity is good as I was able to stand the figure with little issue. I really enjoyed this figure. And even if the figure doesn’t favor Zazie Beetz as much as I would have liked, I’m glad to have this figure in my collection. With the whole Disney/Fox thing, I didn’t know if a series of movie figures would ever come out and now we have Domino, movie Cable, and movie Deadpool/Teenage Negasonic Warhead 2 pack coming out. Maybe a movie Colossus/Juggernaut 2 pack could be on it’s way?

I do worry about “Deadpool burnout” as Hasbro has produced at least 1-2 waves of Deadpool figures for the last 3 years it seems.  One just came out where we got two different Deadpools, one being the Pirate Deadpool (Piratepool?) you see in the picture on the left…

In terms of the movie, I would like to see more secondary characters. Where is my Blind Al figure (she can play as a double in my “Empire” setup as Luscious’ mother)?  And like I said, where is Colossus or Juggernaut?  Even that little foul-mouthed boy would be a plus.  Instead, we’re getting a life-size talking Deadpool head.

While I’m thinking about it, I’m glad I didn’t hear a lot of controversy over Hollywood picking another Black woman to play a traditionally white character. And comic book Domino is as White as they come since she’s albino.  I think Zazie Beetz did an excellent job and I can’t wait to see her in followup movies…and maybe even join the MCU proper.