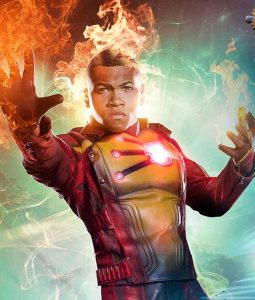 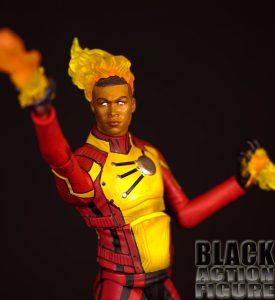 When I first got this figure, I wasn’t super excited to review it. Not only is my backlog filled with better stuff, the character himself is not my favorite off of “DC’s Legends of Tomorrow.”  The character Firestorm was underutilized and even when used, was not used properly. The comic book Firestorm has always had the ability to alter the atomic properties of any non-living material, yet all the tv character does is through fireballs out of his hands. And that’s if they use him. Due to budget constraints, we rarely saw Firestorm while the show focused on the Jefferson Jackson character.  All that and the actor is British trying to sound American, so it all comes off a little janky.

But…I do have to admit, everytime I picked up the box this action figure was in, I couldn’t deny how cool this character looked inside…so much better than the disdain I had for character on the show. When DC Direct/Collectibles announced they were shutting down (or “changing directions” depending on which story you read), I knew it was time to bust open the box and review this figure. Did it meet expectations? Check it out… 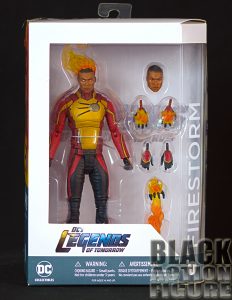 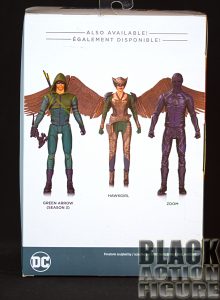 I have never been overly excited over DC Collectibles packaging. It looks okay enough.

I like on the front where the plastic window wraps around the one side.  I like the white letters of the character’s name going up the side. It seems displayed well presenting both the figure and the accessories neatly tucked away inside.

The back is basic-basic. We get an “Also Available” section with other figures in the wave and….that’s it.  No bio-blurb, no other pictures of the character and/or the action figure. The minimalist attitude is mostly because these were available at specialty shops and online retailers. So if you’re picking up and purchasing the figure, there’s a 95% chance that you are already familiar with the character it’s based on. “Hey, you’re buying Firestorm, well we also have Green Arrow, Hawkgirl, and Zoom from our CW shows, don’t forget to buy them too!”

Okay, so the packaging is okay…and that’s about it. It is a collector’s box, so you may take the figure out and put it back in without much effort. I’ll give it that much. 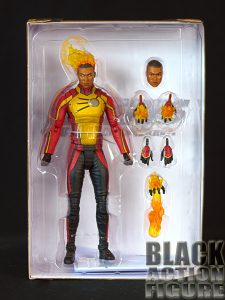 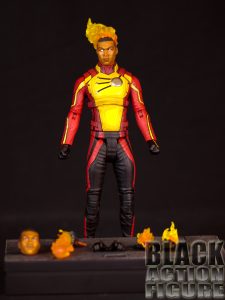 This figure comes with an additional regular head (i.e. not on fire), two full pairs of hands, and a right hand in the process of shooting out a fireball.  One pair of hands are open-palmed and lit with fire deco. The other is a plain open pair of hands.

Switching the hands was easy enough and once in, they tend to stay in place.  Switching the heads though was another matter. No matter how much pressure I put on the regular head, I could not get it to “pop” in place.  I got it to stay well enough to take some pics, but it wasn’t until I returned to the first “flame-on” head that I got that satisfying “Pop!” into place.

What of course would always be nice would be if they include a figure stand.  While this figure did a decent job of standing on its own (after some minor manipulating), it would have been that much easier if they just included a stand like they used to with all of their figures.  I seriously want to know the internal numbers of not including a figure stand turns out to be. 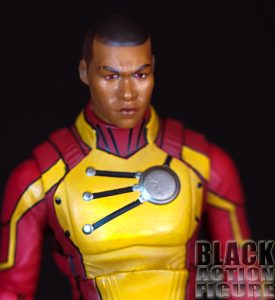 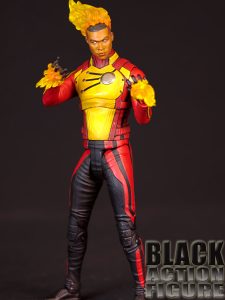 Okay, I have to let go of my personal grievances against actor Franz Drameh. The way he contorts his face when he tries to speak “American” bothers the shit out of me.

That being said, it’s that part of the figure that needles me. This is a pretty good likeness of Franz Drameh as Firestorm. And if I’m to be completely all honest, this is a better version of him. We don’t get the contorted facial gestures or (thankfully) the strained speech patterns. We just get the likeness. And you know what? I’m okay with that.

The outfit and paint job on the figure are well done also. Like most of the figures from the live-action television shows that DC Collectibles makes, the outfit has an additional black wash/shadowing to it that makes it less comic book-y and more real life which I believe they were going for.

The profile shot kind of bothers me. It comes off as looking like a spoiled kid not getting his way.  But if you ask me, that’s how I picture the actor, so I guess points to DC Collectibles for capturing that.

The flame effects on the head and hands are actually pretty awesome. I wish they came separately as they would go well with other figures like the Human Torch or Sunfire. 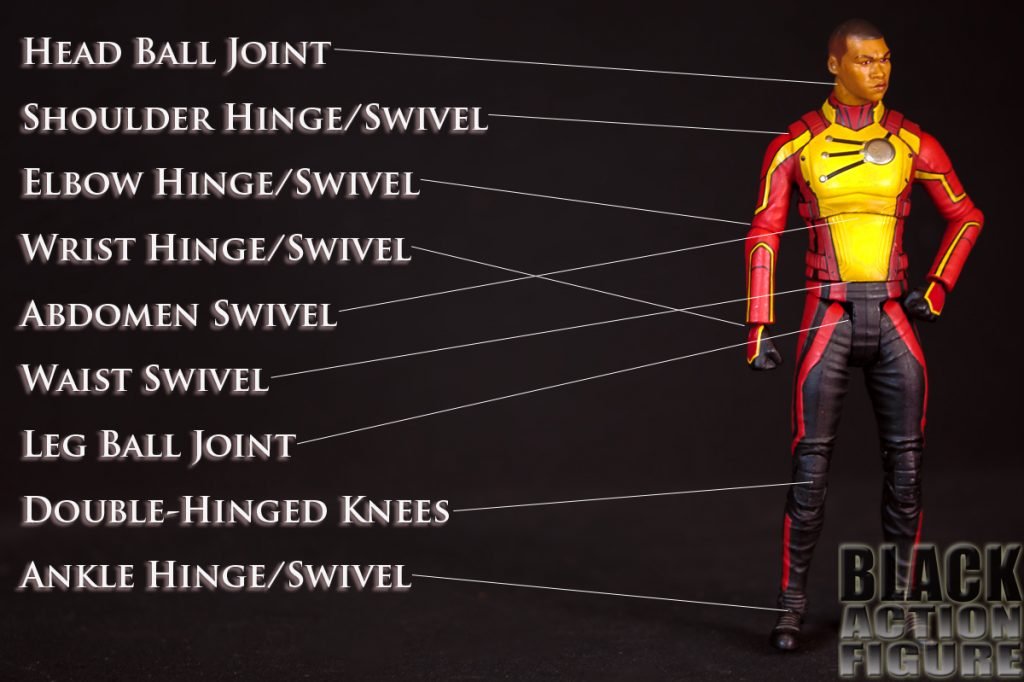 If this figure received losing marks on anything, it would definitely be articulation. As you may know, DC Collectibles is not known for their articulation.  This figure has an okay 25 points of articulation, although of course there are some hitches.

The figure’s head can look down slightly, but cannot look up.  If you read this blog, you should know that this bother’s me the most, especially on figures of characters who can fly because you lose some poseability points there.

No real costume-blockage to note, which is good. There are a couple of things I wish were different. I do wish there were double-hinged elbows as I would like to bend the arm inward more than it currently can.  I would have also like a thigh swivel for better poseability.  As it is now, the balance was just okay. I got it up and able to stay but it took a little time.

There is an issue with the Abdomen swivel at least on my figure (not sure if it’s across the board). when I twist the abdomen swivel more than 10-15 degrees, the whole top half of the body pops off of the swivel ball joint it is connected to. So the figure is not broken, but that leaves little room to articulate with, so you may as well knock that down to 24 points of articulation.

I was however actually able to get this figure in a couple of good poses, so there’s hope there, but I have to compare it to Hasbro figures. If it doesn’t meet or exceed what they are doing over there, then it’s losing (or at least falling behind…) 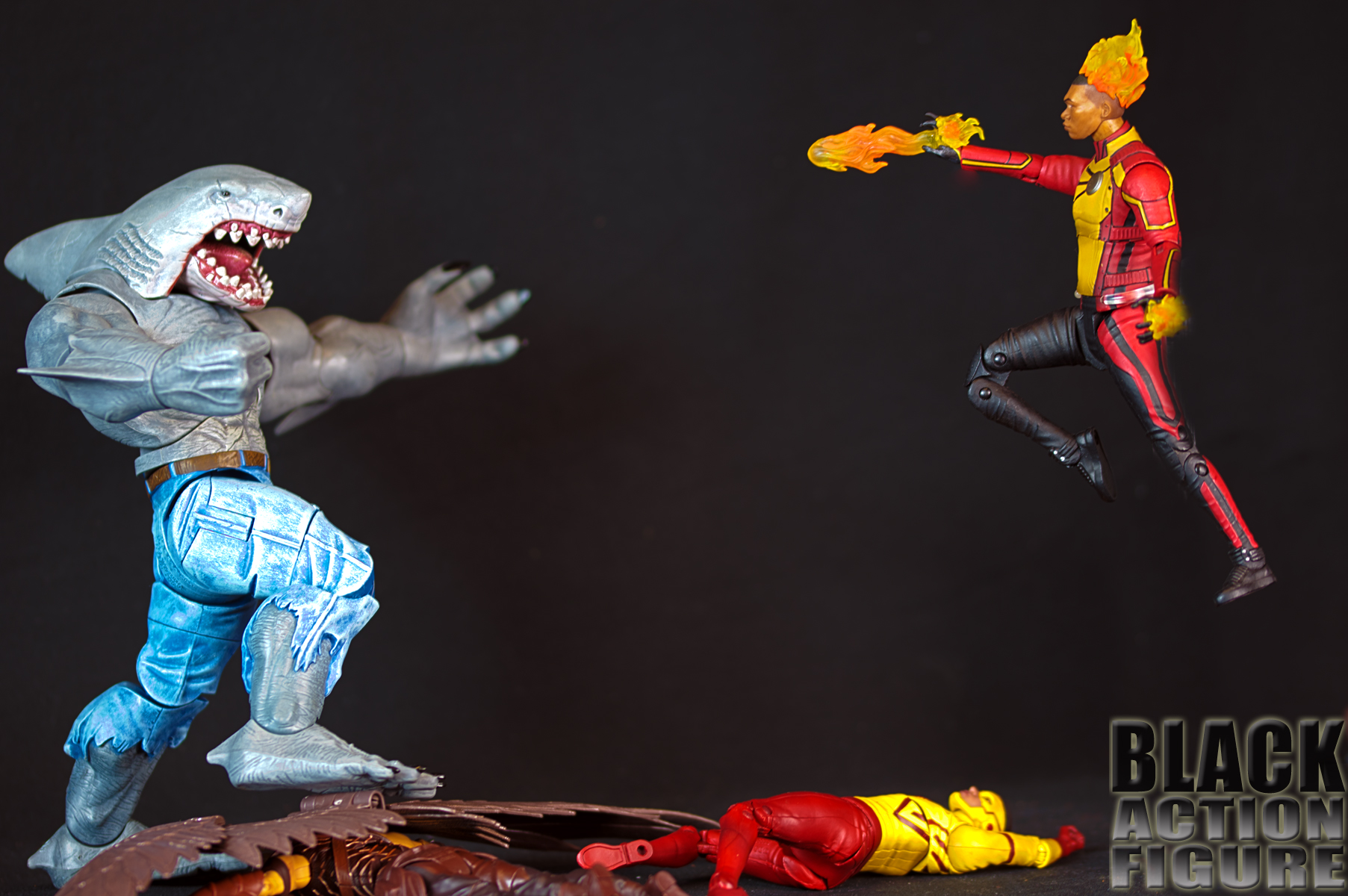 Just putting this here, I’m glad he’s off the show. They didn’t have the budget they wanted to use him (another reason why Hawkman and Hawkwoman were written off) and he’s just not a very good actor in my humble opinion.

At any rate, I’m going to miss DC Direct/Collectibles. While I humbly acknowledge that I like this figure, there are so many other figures that we’re missing out on. They’ve also rebooted their lines so many times that by the time “DC Essentials” came through, I cherry-picked the ones I wanted and I’m able now to walk away feeling like I really didn’t miss anything.

If you’re a fan of the show, the character, the actor (ugh), or just DC in general, I suggest you get the chance to pick up this figure.