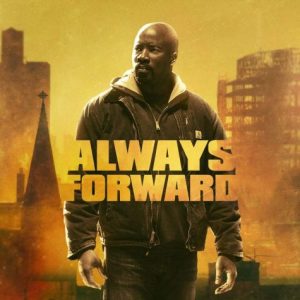 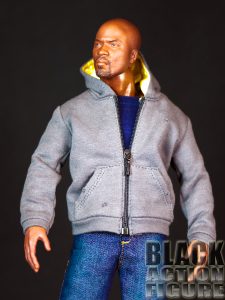 I asked some of you what you would like to see more on the site, and a good third of you requested more 1/6th scale figure reviews. With that being said, I do have a growing backlog of 1/6th scale figures I need to go through, so I see it as a win/win situation for all of us!

First up is Luke Cage! Okay, really “Black Steel”…so let me give you some reference for this odd naming.  Many of us love different properties, but those properties aren’t always turned into action figures in scales that we want.  Some reasons may be that official retailers feel that they won’t make a profit off of it, and/or either can’t or won’t retain the official license of said product. Companies like Hot Toys have produced figures from Netflix properties like Daredevil and Punisher with pretty good success, but have yet to touch or won’t touch other properties like Luke Cage, Iron Fist, and Jessica Jones.

Enter alternate toy companies.  These companies produce unlicensed figures of characters that we want in our collection with near Hot Toys quality and likeness. In this case, we get Toys Works’ version of Netflix’s Luke Cage character, aptly named “Black Steel”.  It was a good price and has potential to fit in with my collection, but does it make the “Hot Toys” test?  Let’s check out the review… 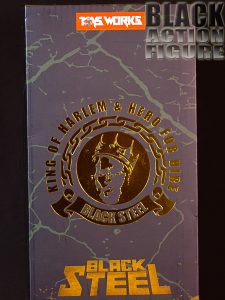 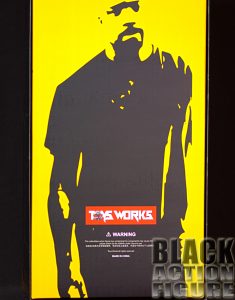 Sometimes you get these “alternate companies” that get creative with their packaging and sometimes you get those who just give you a black box and leave you to deal with it.  In this case, Toys Works is more the former.

I love their creativity in getting around the license issue.  For the front of the box, we get an interpretative mix of the character and the Notorious B.I.G. (whose frame picture was on the wall in the series).  Around the picture, we get the words “King of Harlem & Hero for Hire…Black Steel.”  As soon as you hear the words “hero for hire,” any Power Man fan knows you’re talking about Luke Cage.  Further down the box we see the words “Black Steel” again, this time done in a font similar to the one they used on the show.

On the back, we get a bitmapped image of….some guy. Hey it could be anyone. My daughters said it looked like me. I mean, it’s not Mike Colter as Luke Cage. It’s just some random dude…

All in all, a pretty creative way of presenting the figure.  Not only will I keep the figure, but I will also keep the box that it came in, for storage and/or resale. 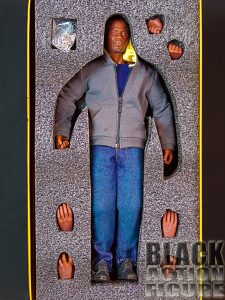 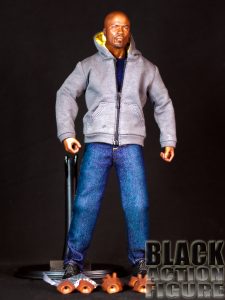 I love these “alternate company” figures. They usually use some type of packing foam to pack their figures rather than the clam shell plastic that Hot Toys generally uses.  And I’m not mad!  To me it’s easier to deal with sometimes and provides quick access to your figure and accessories.

With this figure, we get three additional sets of replaceable hands, a metal chain, and a generic figure stand.

The chain first…it’s more associated with the comic book version of Luke Cage, but I’m glad that it’s in there. It seems it was used as a “what other accessory can we put in the box other than another set of hands” type accessory. But it is appreciated and I will use it to display with my character (even though I forgot about it and have no pictures of it actually opened in this review…oh well, y’all get the picture).

I do appreciate the variety of different hands we get whether it’s open palmed, closed fist, accessory grabber or the WTF open palmed hands. Gives me plenty to play with…although minus points because it’s the type of wrist connection that you have to be careful when pulling a hand off and putting another one back on. It get’s to be a pain, so make sure you use the hand you want and keep the rest in the box. BTW, points off for the closed fist pair of hands. They are way too small for this figure and don’t match the size of the rest of the hands.

I also appreciate the stand as well. I won’t be using it with this character, but I’m always in need of a generic stand, possibly to use with another figure.

What would have been nice for some authenticity would be maybe an extra hoodie and t-shirt riddled with bullet holes. That would have nearly given this category a perfect score… 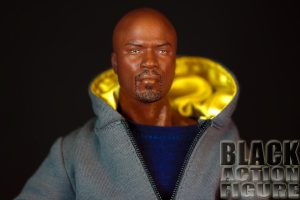 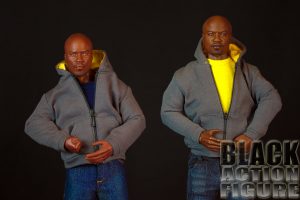 Right off the bat, I need to talk about my other Luke Cage figure. You may have seen it in pictures around the site or on Facebook or Instagram. It was my stand-in for Luke Cage on my shelf. It was purchased as a set but came in separate pieces, what is normally referred to as a “kit-bash”.  I received a body, clothes, and a headsculpt in a plastic bag and I had to put it together.  I even bought an additional yellow T-shirt to add to it.

Everything was seemingly nice about this figure, but I never really bought into the look and accuracy of the headsculpt. It never really looked like Mike Colter to me. I mean, it was close, but maybe too scrunched up.

When I saw the Toys Works version, I told myself I had to get this one because this is the one that will replace my first one on the shelf. This figure is Mike Colter.

Then I got the figure….and it was just okay. The Good: The headsculpt did turn out pretty incredible. I have looked at this headsculpt and a picture of Mike Colter and it is pretty much dead-on. In a Hot Toys scale, I would give this a 8.5 or 9.0 out of 10. It’s that good to me.

The rest of the figure…starts to fall flat. The hoodie looks like the figure got an extra size up, and doesn’t fit well. The body seems to skinny. Then I stood this figure next to my kit-bash figure and immediately discovered the issue…it is too damn small! If this were a 1/1 scale, my kit-bashed figure would be easily half a foot taller than the Toys Works.  Mike Colter is 6′ 3″…this figure would have made him about 5’10”.  Unacceptable!  Toys Works has made broader figures before (my Colossus and Cable figures come to mind). They could have used a bigger base figure with a broader body. But…they didn’t. (learn how I fixed this issue in the “Some Final Thoughts…” section).

The skin coloring of both figures are pretty close, so no complaints about that…until I took off the Toys Works figure’s hoodie. Underneath, it becomes pretty obvious that the forearms were colored darker than the rest of the body. I’m pretty much in disbelief that I noticed this.

There is also more definition in the clothes of my kit-bash figure than the Toys Works figure. If you look closely, you can see details in the hoodies and the jeans both differ rather dramatically in some areas.

All in all, outside of the headsculpt, this figure turned out a little more than disappointing in several other areas… 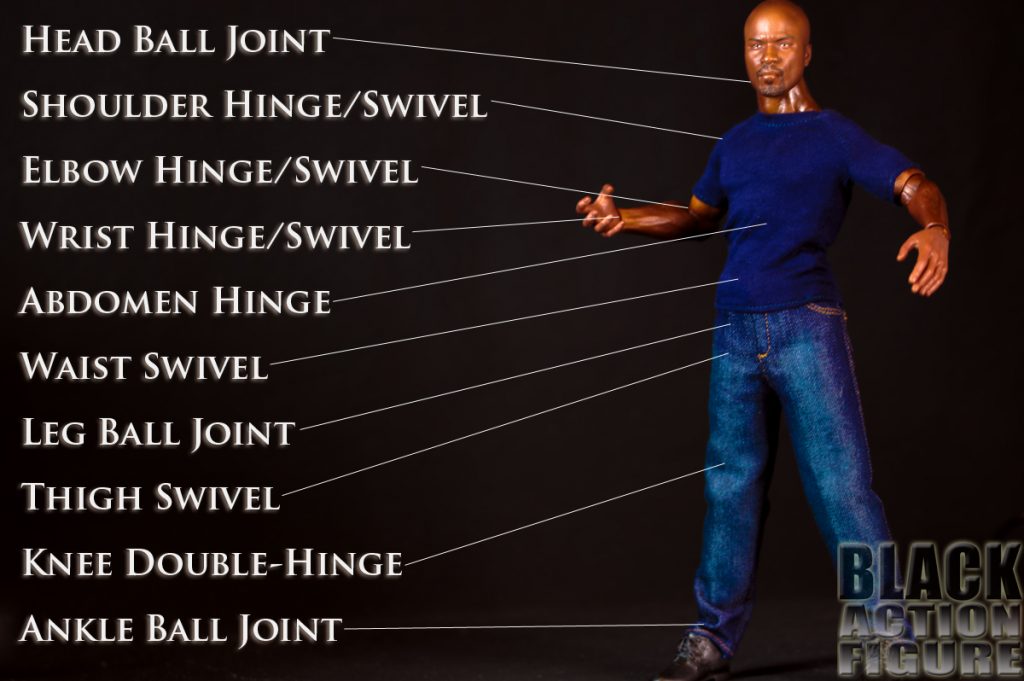 This body features pretty basic articulation by any sized figure standards.  This figure has 25+ points of articulation. So it can move, just not as well as say a Hot Toys figure.

And we get plenty of costume-blockage with the soft goods clothing on this figure. These “skinny” jeans offer no allowability of forward leg movement (although the leg can swing out to the side).  The double-hinged knees are also hindered. They can be bent only so far. The shirt also limits shoulder movements as well.

I would have loved to have posed this character in a pre-swinging punch pose, but with the limited articulation (not to mention those tiny closed fists), I left well enough alone. 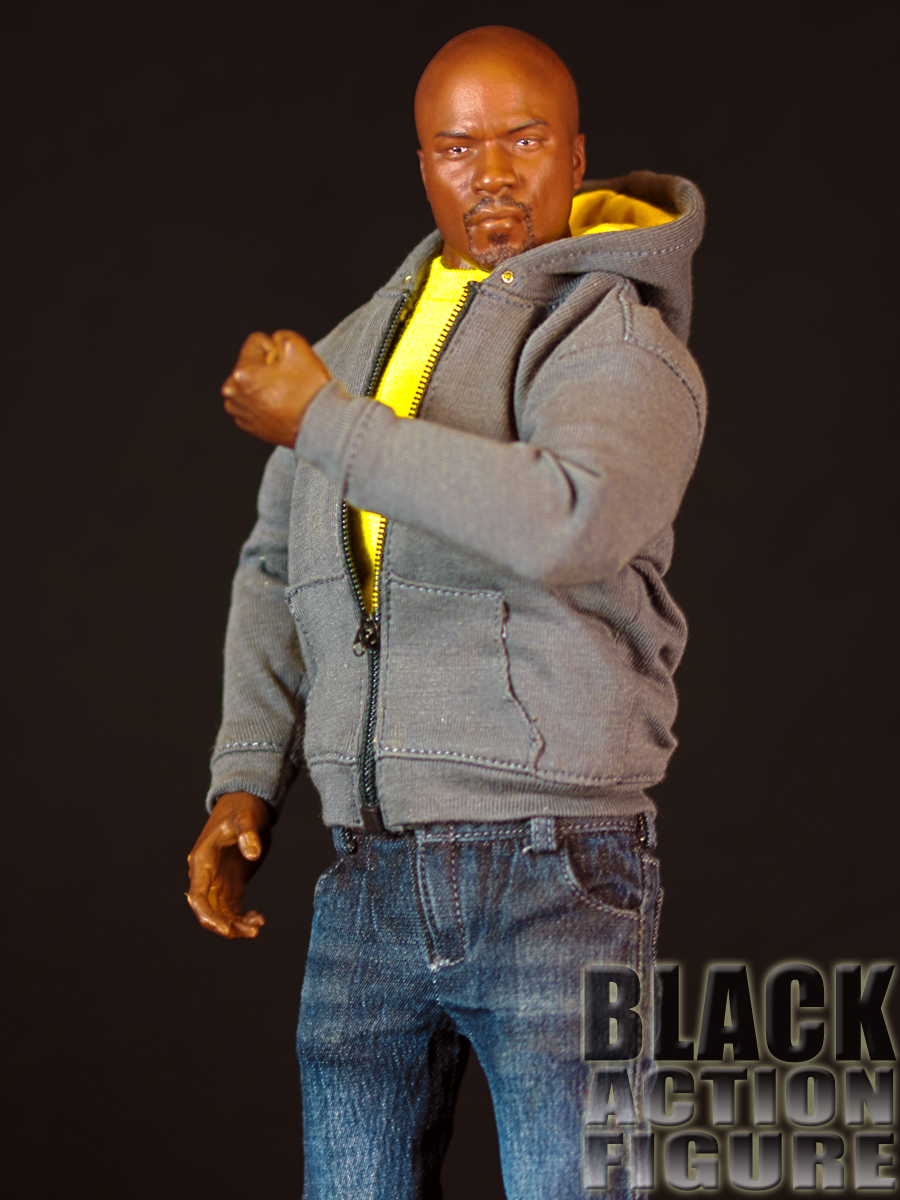 After reading this review, it’s no secret that I was disappointed in this figure…but I loved the headsculpt. Sooooo….I had this idea!  My other figure was a kit-bash figure whose headsculpt I wasn’t crazy about.

1/6th scale figures typically have similar interchangeable parts….so a headsculpt swap was in order!  And you know what?  I’m kinda digging my kit-bash of a kit-bash figure.  I mean, I may be kicking myself that I paid _______ for the Toys Works figure, but I did get the Luke Cage figure that I wanted. Seriously, check out the picture…that headsculpt looks a lot better on the taller, broader kit-bash body.

It’s so life-like now, my kids asked me why I’m editing a picture of Mike Colter. I told them that it was another action figure of mine. And at first, they didn’t believe me until I turned them around to see this newly created figure put together on my shelf.

My final words on the Toys Works figure?  If you don’t have anything else, it may be a worthy investment. The usual problem with these unlicensed figures though is that they are often offered in a limited run (most likely to avoid licensing issues). They are a decent price in the beginning, but after the limited run, you can sometimes only find them on eBay.  A quick look on eBay, and the original Toys Works Black Steel figure (not my kick ass collab figure on the right) is now going for 1.5 to 2 times what I paid for it, so use your discretion.  It’s out there for decent prices if you’re willing to hunt one down, just keep in mind what I said.

So until Hot Toys decides to pick up and produce this property (which I doubt at this point), this is our best bet…

(NOTE: This is the first time I’m going to manually adjust a score. I felt like anything north of a 7.0/10 was too high for this figure, so knocking it down a couple of points…)