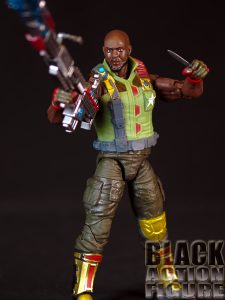 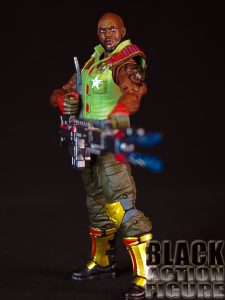 When I was a kid growing up, I was a huge Star Wars fan. I had all sorts of Star Wars toys around. When Hasbro first introduced the resurgence of GI Joe as 3.75″ action figures I didn’t really take notice. It wasn’t until I got the Sears Roebuck catalog that Christmas along with a healthy dose of the Hasbro-produced G.I. Joe cartoon that I caught “Yo Joe Fever”. By that time, I had missed out on the first Black Joe, Stalker. I couldn’t find him anywhere. When Doc came around, I wasn’t too interested because….well, he was a Doctor. What was he going to do, throw some gauze at Cobra?

It wasn’t until the introduction of Roadblock that I became nearly fully invested in the GI Joe world. The Joe Team’s Heavy Machine Gunner…how cool is that? He comes in the scene, shoots up the place, then bounces. Hasbro even gave him a cool little talking quirk….he rhymed everything he said. It seems pretty lame now, but this was the early days of hip-hop and here was a Black hero who rapped and carried a big gun. Sorry Lando, it’s time for you to go back into the closet, I’m all in on G.I. Joe!

Thirty-five+ years later, Hasbro has once again played their G.I. Joe card. Their 3.75″ figures had died down to convention and club exclusives and people were going all in on the 6″ scale with Marvel Legends and Star Wars Black…it was more than inevitable that Hasbro introduce a new line of G.I. Joe figures catering to new and old collectors alike!  And just like 35 years ago, my very first GI Joe figure in this new line is the character that made me go all in the first time…Roadblock. Is this new Roadblock ready to join the upper echelons of action-figure”dom”? Let’s check out the review… 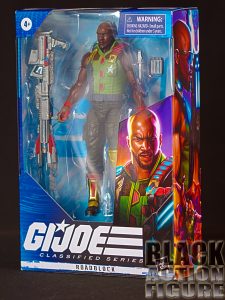 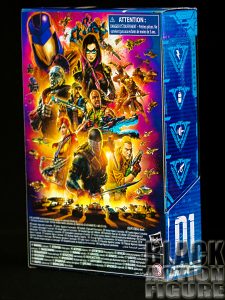 There’s nothing I like more than to review brand new packaging on a brand new figure line. And Hasbro did not disappoint. I know it’s weird but this packaging pleases me in so many ways. That may wear down in time, but for now I will enjoy it.

On the front, we of course get the name of the figure line, “GI Joe: Classified Series” along with the character’s name and a big ol’ window.  In the bottom corner, we get an artist representation of the character. Which is nice…maybe a little too nice, because the art is looking better than the figure itself. More on that later.

The sides of the packaging shine as well. We get more character art on the right side, and on the left we get the figure number in the line. To my surprise, Roadblock is listed as “#01!” I mean yeah, he’s number one to me, but this was a wave that included fan favorites like Duke, Scarlet, and especially Snake Eyes, and Roadblock got listed as #01!

On the back is a collage of artwork of current and future figures. About 80% of the figures have been either made, or announced, so it’s a good indication that this art is a representation of some future collectibles, including unannounced Baroness and Cobra Vipers. We may even see some vehicles down the road. 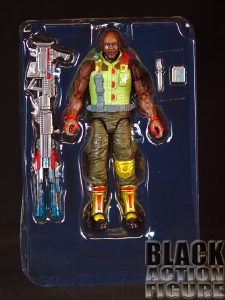 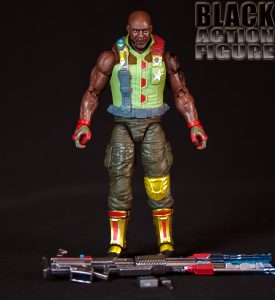 All right Hasbro, this is “G.I. Joe”, so you know you have to come with the accessories! And with Roadblock, they did…kind of.

To hear it from a Hasbro rep, the GI Joe Classified line is an updated “re-imagining” of classic characters. So this is what Roadblock would look like in 2020….along with his big ass laser blaster.  That’s right, laser blaster. It’s 2020 y’all…it’s no longer PC to say “gun”…if you listened to last week’s GI Joe figure announcement (which announced figures from the next wave), it was funny to hear the spokesman accidentally say “gun” more than once…only quickly to correct himself with “blaster.”  Okay, whatever.

The “blaster” itself is okay. Maybe a little too futuristic for my taste. They could have easily made it look more like a machine gun and just added some flair to it to make it into a blaster. Looking at the weapon accessories from Duke and Snake Eyes, this is pretty much what they did. I’m kind of surprised they took this route. But no worries…I have a 3rd party weapons pack on it’s way.

Along with the blaster, we get a magazine for it….but it’s a laser, so maybe it’s a battery pack?  It doesn’t matter because once you put it in the blaster, you will instantly forget it. I know I did. And the last accessory is…a small ass knife. Really? They couldn’t “Crocodile Dundee” up his knife a little? He’s the heavy machine gunner, but I guess the baby ass knife wielder?  All of Scarlet’s knives are bigger than this.  Maybe I’m just incorrect. It’s a toothpick. It’s what he uses to pick his teeth with. 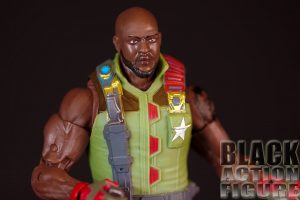 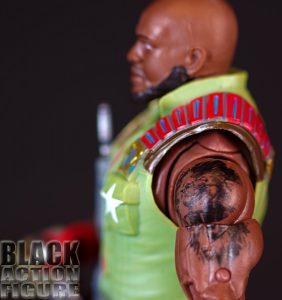 Okay, this is a harder one to go by.  It’s an all new re-imagining with the “source material” being whatever Hasbro comes up with.  With that in mind, this figure looks great. It is an updated look to one of Roadblock’s previous outfits (the one with the white t-shirt under the vest) and not his original one (the camouflage tank top).

Overall it’s a great updated look, but I do have some nitpicks. I’m wondering why the sculptor made his cheeks so full. It doesn’t photograph well and it doesn’t match up with the artist interpretation on the packaging. Looking at the headsculpt straight on, you don’t notice it as much, but as soon as you start to hit that profile, those cheeks are pretty prominent. Weird design choice.

Let me say, the lion tattoo on the figure’s left arm is excellent. I’ve always been amazed at the accuracy and detail of the tattoos on the wrestling figures…it’s actually great to see one on a Hasbro figure. Makes me want a lion tattoo now too.

Paint application is pretty good. It’s colorful, but not garish which is what I think they are trying to do with the line. Almost a more grown up feel to a classic franchise. 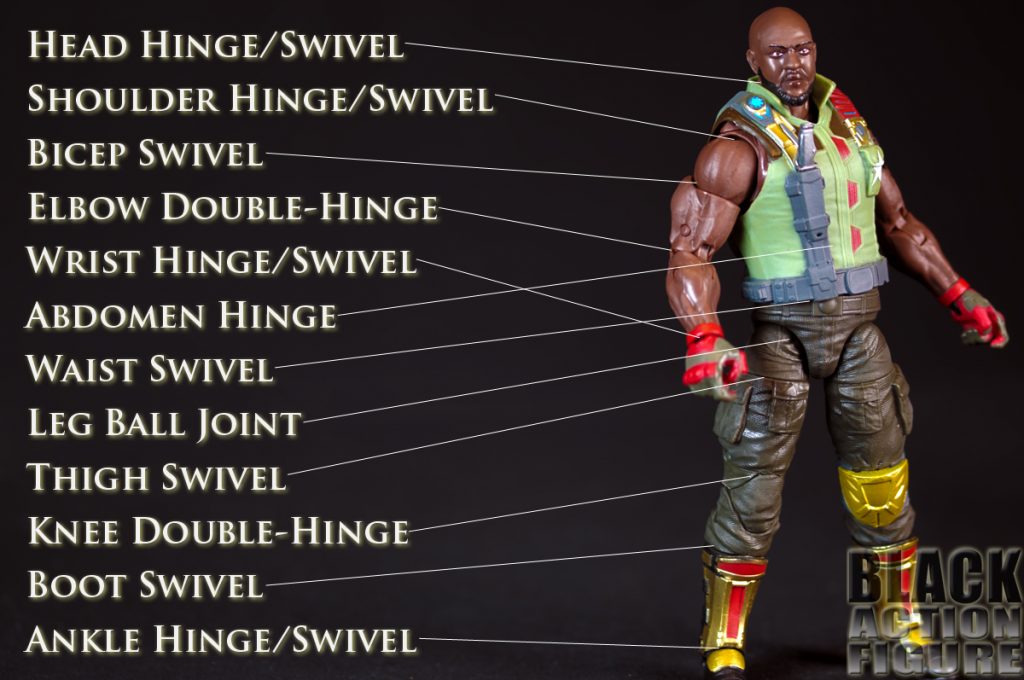 So can we get away with saying ‘kung-fu grip’ in 2020?  Hell naw!! So let’s just say that this figure is hella articulated! With over 34+ points of articulation, Hasbro has leaned more towards their ‘Marvel Legends’ side (as opposed to the not as well articulated Star Wars Black side) to articulate the heck out of this figure.

BUT…costume blockage is real.  The vest on this figure most assuredly completely blocks the abdomen hinge and blocks the head from looking up. Does it take away from the figure? A little, but not enough to lose enjoyment over it, so definitely enjoy the poses you can throw this figure in. I would say a major limitation to posing is the one or two ways you can put the gu….errrr…blaster into the figure’s hands. Again, I suggest getting a weapons pack from somewhere, it will be an added plus to the figure.

To note, I missed adding a point of articulation in the diagram above…the shoulders have extra articulation in them, almost like the more recent Marvel Legends Spider-Man figure. I will assume it’s to help with the limitations of the vest and the awkwardness of carrying the blaster. 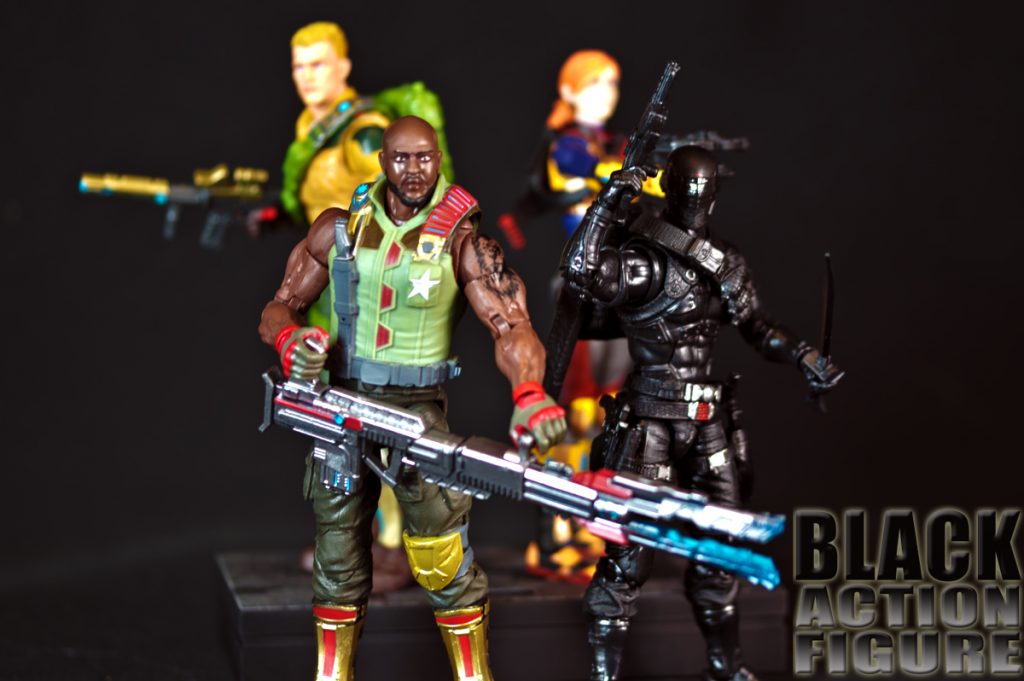 I am not kidding…I will try to be all in on this line. This is a cooler more defined version of my childhood in plastic form. Serious talk though, if they put out some vehicles with this line, my wife is bound to divorce me. I already got the Star Wars 6″ scale Tie Fighter and plan on getting the 6″ scale Snowspeeder when it comes out. Just don’t ask me where I’m putting it.

I’m even throwing down with this new “Action Force” 6″ line. No one recognizable, but some of the figures have some cool accessories that would make it potentially a good addition to the GI Joe team.

So bring on Doc, Stalker, Alpine, Iceberg, and others…we have been waiting!

Click on the affiliate link below to pick up this awesome and highly sought after figure!