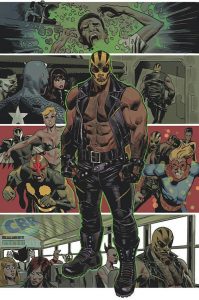 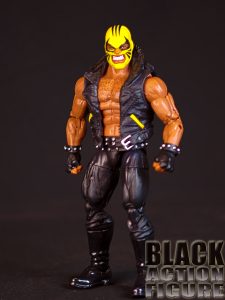 A few days ago I reviewed Marvel Legends Night Thrasher and in it I expressed how I couldn’t believe that it took 30 years for them to make this figure. Well, Rage has also been around almost as long as Night Thrasher, but we did get a Rage action figure in the Marvel Legends 3.75″ line back in 2016. Unfortunately, that line ended before it began due to low interest, low distribution and increased costs per figure (at the time $12). I wondered to myself if/when we would ever see a 6″ version.

Thankfully, a 6″ version was announced at the New York Toy Fair back in February of this year and on this past Friday, Amazon came through (after an initial delay I can only attribute to the current worldwide pandemic).  Along with Night Thrasher, Nova, and Darkhawk, Rage is a welcome addition to what could be a fully formed New Warriors team in my collection. With so much anticipation, does this figure come through? Check it out… 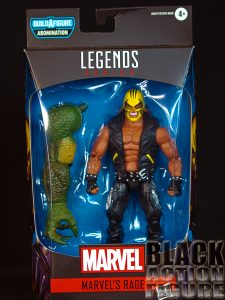 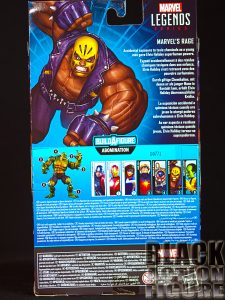 Again, we have “Marvel” claiming their Rage character along the bottom.  Not to be confused with the video game or the 2014 Nicholas Cage movie of the same name (although come to think about it, a Nicholas Cage figure would be pretty cool…).

Flipping the figure over, I once again hear the sad trombone of disappointment (“womp womp”) as I am met with another artist rendition of the character. That’s good for some people, but I would love if Hasbro went back to putting the action figure on the back.  It seems like such a misrepresentation, especially if the artist takes some of their artistic license to the character, therefore taking away or adding features to the artist rendition that are not present on the figure.

At any rate, normal packaging score… 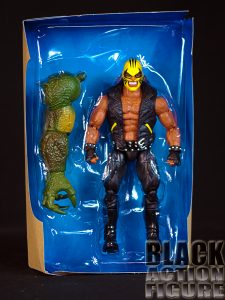 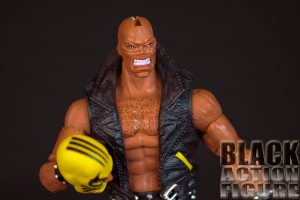 This one will be easy…you get none. Outside of the figure and the Build-A-Figure piece, you get absolutely nothing else.  Which is frustrating, because even with the hulk you get that bent “steel beam” with it. And that could have been an easy repaint to include package with this figure.  Anything to indicate how strong this character is supposed to be.

I did notice and manage to take the mask off and I thought to myself “wow, Hasbro is giving us a figure with a removable mask? Sweet!”

Taking the mask off of this figure reveals a deformed Rage with a gigantic rectangular- shaped hole in the figure’s head. Nope, the mask is not meant to come off, especially since the “nose” is built in to the mask itself. The figure just looks like some strange burn victim. So we can’t really count the mask as an accessory. 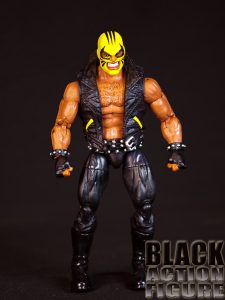 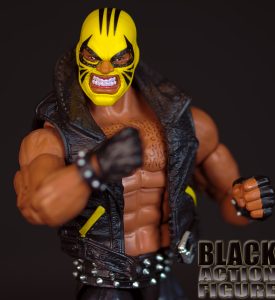 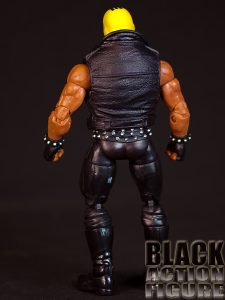 The Rage character has had many looks over the years. I believe that this outfit was based on his first appearance in the comics. With the yellow tiger-striped mask and the armless leather jacket. Again, over the years the character’s look has changed like some of the other heroes, but Rage has basically stayed with the wrestler mask look.

The mask (don’t remove it) is a rubbery substance.  The armless leather jacket is not only nicely implemented but very nicely textured where I can almost believe it is leather.  (or at the very least, pleather). The spikes on the belt and bracelets are also nicely sculpted onto the figure.

The paint job has been on point lately with Marvel Legends and this figure does not disappoint. One thing to mention that we did not get on the 3.75″ figure is painted on chest hair.  I never felt that Marvel Legends figures was necessarily missing chest hair, but then they take that extra step and go ahead and add it on anyway. 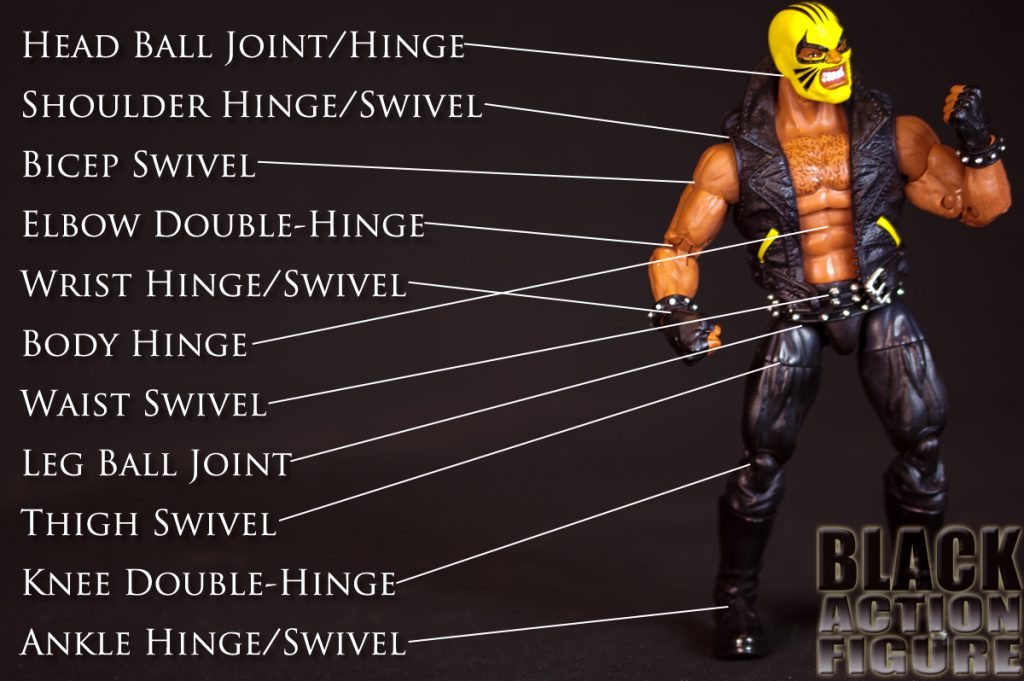 Unfortunately, “costume blockage” finds it way, not allowing the full range of motion for the figure’s head.  Sad, but definitely not a gamebreaker.

As it is, the other points of articulation are great and this figure has awesome balance to it. Probably because IT DOESN”T HAVE ANY ACCESSORIES…but I digress. 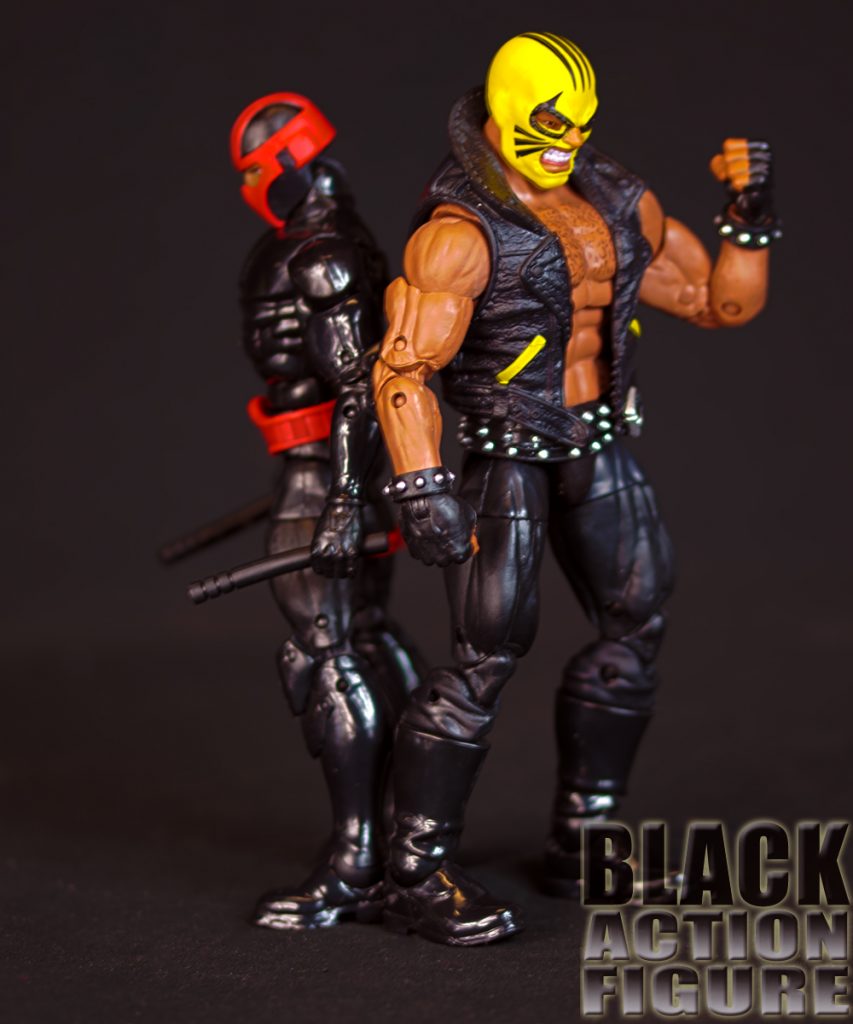 Before I forget, let me credit Facebook Fan, Dravon Sligh, with the pose idea (Thanks Dravon!)

There’s not much to this figure, but honestly, there doesn’t really need to be.  Rage is known for his strength, speed, and his ability to absorb and redirect kinetic energy into more strength. Not to mention the fact that he is essentially a teenager.  He started out as a 13 year old splashed with some toxic chemicals that aged him into a man’s body with extraordinary powers.  To date, I believe the character himself was killed, but this is the Marvel Universe.  They will find a way to resurrect him.

I really hope they take the time to complete the New Warriors team. We need a Namorita, Speedball, Firestar, Justice, and (dare I say) Silhouette to round out the team.  Hasbro, let’s get this done.

Rage is only coming one per case. So if you see one, make sure you snatch it up.  We don’t know if Hasbro will let another 30 years before we get this character again…

(As of this writing, the 6″ Rage is not being listed on Amazon at the moment…I’ll update the link when it comes back up.  If you are interested, here is the link the 3.75″ version)

(see note above about this figure)