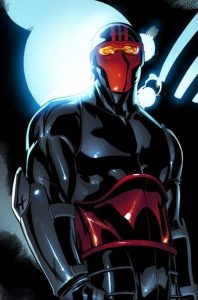 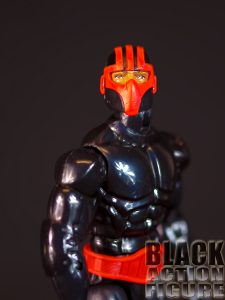 Do you remember back during the ToyBiz days and you couldn’t believe that they made a figure of a character that would be kind of obscure or lesser known but you know them well? Well, Hasbro started to go down that route with their 3.75″ Marvel Universe line…and when their 6″ Marvel Legends line was the apparent successor to that line you just knew they couldn’t do it again with this bigger scale. But they managed to do it…produce a figure that I have been a fan of for years and make it dope as hell.

Night Thrasher is not one of Marvel’s well known heroes even though he’s been around since 1989 (that’s over 30 years folks!), but he has had some major accomplishments in the comic world including being the founder of the New Warriors, one of Marvel’s sleeper hits of the early 1990’s, with the first volume of the comic lasting over 6 years. The character has even been bounced around to have his own show once or twice. Thirty years later, and we finally get an action figure…so does it do him justice?  Check it out – 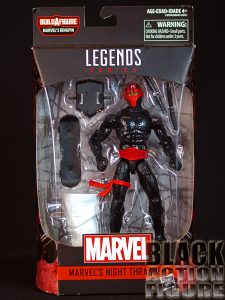 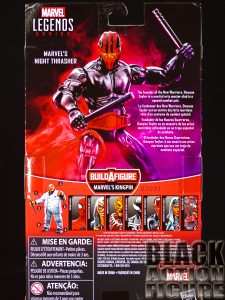 For a figure whose primary colors are black and red, the black and red packaging frames and compliments the figure nicely. The background behind the figure was also a nice touch, as at this point I don’t remember ever seeing anything so artistic to accentuate the character. Very nice touches for those who are “mint-in-box” collectors.

I’m still a little confused by the “Marvel’s Night Thrasher” tag line along the bottom.  Was it any question to whom Night Thrasher belonged?  I Googled “Night Thrasher” and the first 3 pages are nothing but reference to the Marvel character. There must have been a D-movie horror flick somewhere and Marvel and Hasbro had to differentiate this one from that one.

Flipping it over, there is one thing I instantly realized…Hasbro used a picture of the figure instead of an artist interpretation of the character. I had to go back and see when this was first released, which was January 2019. So this must have been one of the last if not THE last time Hasbro has used an actual picture of the figure instead of a drawing of the character…and I miss it. Yes, it is highly Photoshopped and staged, but dammit, if it doesn’t look good. Please Hasbro, go back to this! They get an extra point on the score just for this… 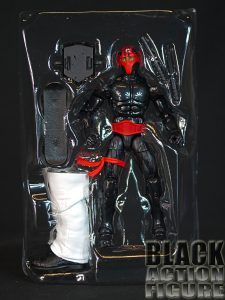 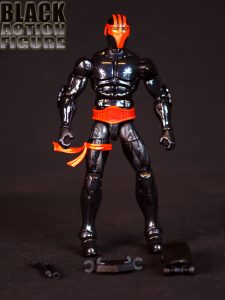 Appropriately so, Hasbro included almost every accessory you would want with this figure…a set of escrima fighting sticks, a backpack/holster, and yes, a SKATEBOARD! I really didn’t think I would get to see a skateboard with this character, but when he first came out in the early 90’s, he used that skateboard a lot for travel and defense. Over time, I think the character has gotten over the skateboard phase, but I’m glad they found a way to get that accessory in with this figure.

I can only think of a couple of things I would have wanted to see. An attachment on his wrist for his pop-out guns built into the suit, and also an unmasked head would have been nice. Other than those, great use of accessories. 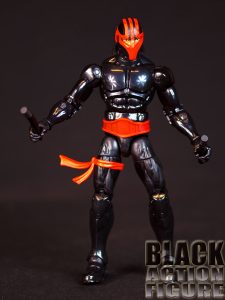 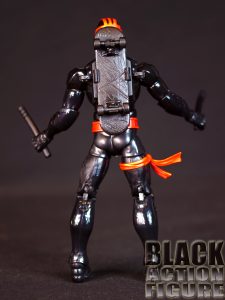 This design for this figure was apparently derived from the “Mark I” version of the character’s battle suit. Over the years, many artists have added and adjusted as they saw fit, but the suit boils down to black armor with red accents.

Extremely noticeable is the shine of the black plastic/paint they used for the majority of this figure…and to be truthful, I don’t really like it.  I know they were going for the simulated metal feel, but I think a nice matte black would have been pretty awesome.  The shiniest of the suit was distracting especially during the photoshoot.  If I was able to get my hands on an extra one, I think I would repaint it with the matte black finish and see how it would have turned out.

The costume design, although technically accurate, falls short in a couple of ways. First, I wish the belt was sculpted in instead of the cheaper solution to slap a piece of plastic on it.  The same for the fabric tied around his leg.  Because it is soft plastic, it constantly is falling down if you look cross-eyed at it.  A spot of glue would fix that issue or even again being part of the sculpt. I see where Hasbro was going with most of the decisions into making this figure, and we still get a cool looking figure, but there were obviously corners cut to keep some of the production costs down.

Still, an extremely nice to look at and accurate figure. 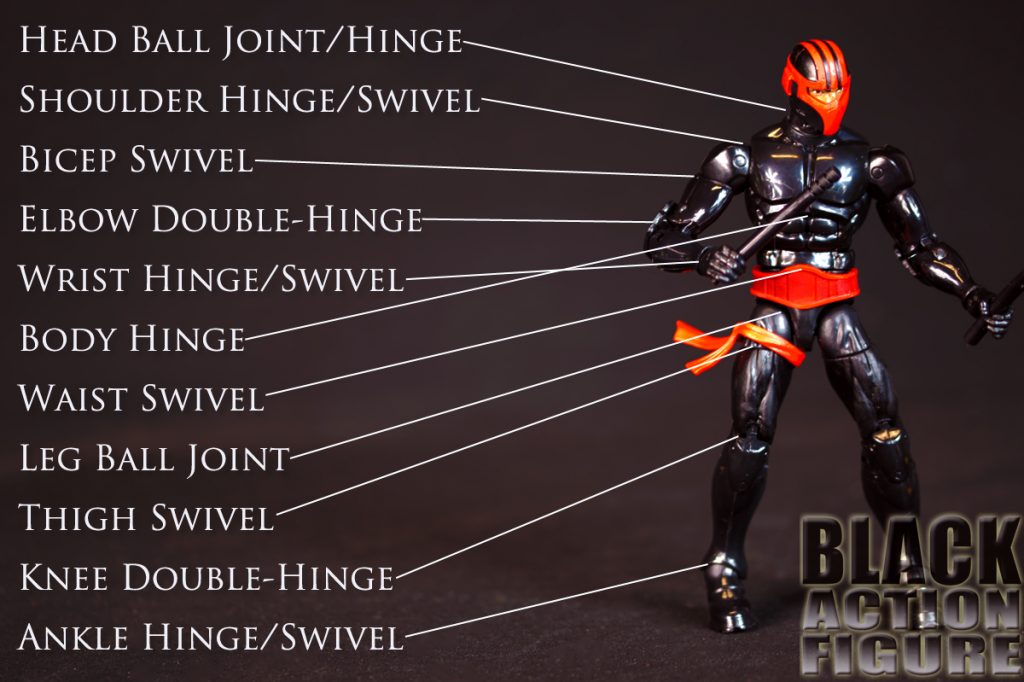 In the true Hasbro form and fashion, this figure has over 30 points of articulation.

The Good: I am always impressed on how Hasbro handles head articulation and because of the added hinge, we get a wide range of motion looking up and down. And when there is no obstructions like hair or clothing (like with the Heimdall figure), you can appreciate it. I often hope for other companies to steal this idea to incorporate it with their figures.  The figure itself is also incredibly well balanced and made posing it easier.  I was even able to get the figure on the skateboard in a crouching position with little to some effort.

The Bad: I’m also a fan of the elbow or knee double-hinge and when something gets in the way, I am quick to voice it. That being said, the elbow pad impedes full range of motion for the elbow…not noticeable until you try to put the figure in a more dynamic pose. 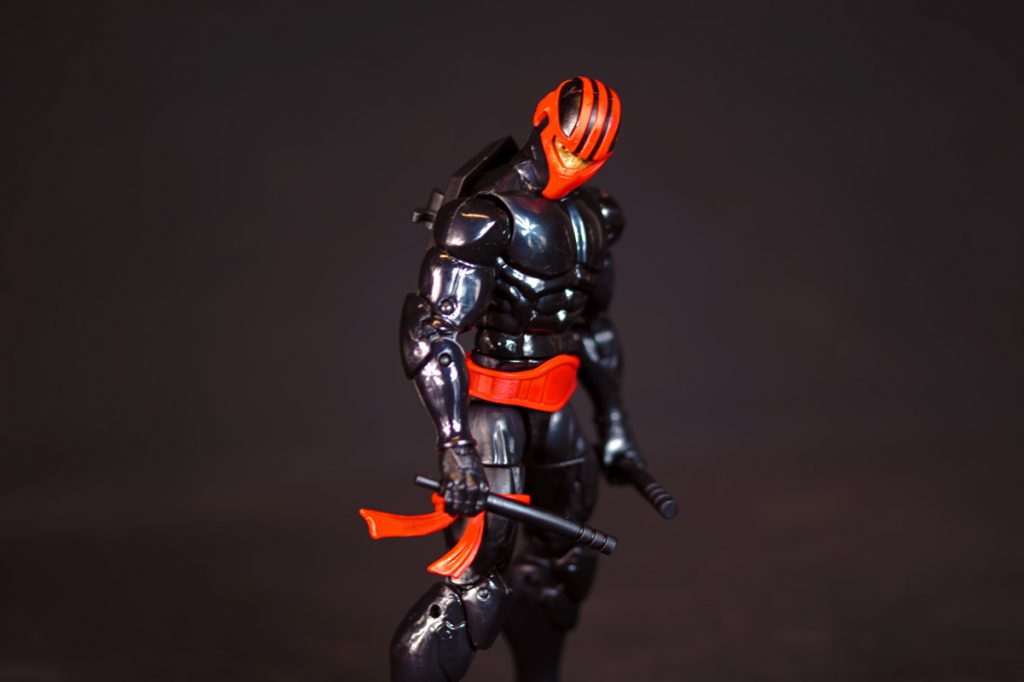 This was probably one of my favorite figures of 2019 so far. Yes, I know it’s 2020 (no matter how hard I try to imagine it is not, thanks coronavirus), but I am just getting to some of my 2019 figures. To be honest, there are figures from probably 2014 that I still need to get to, but there is always one I want to get to sooner rather than later…and this one was one of those figures. Not only because he is a cool figure, but because another New Warrior just came in the mail yesterday, and I really want to review it.  Yes, Rage may very well be my next review.

Like the character himself, the New Warriors was very underrated. I loved reading this book of quirky B-list heroes who have grown into their own during a time when the X-Men was the goto group for Marvel. I loved the pseudo-teen angst, the quirky B-list villains they went up against, and to even see them grow in the last 30 years.