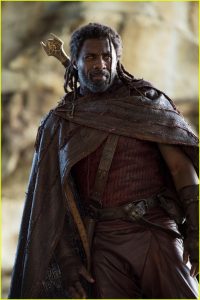 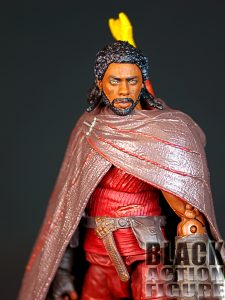 Ever since the first Thor movie, fans and collectors have wanted a decent Heimdall figure to add to their collections. When one finally did come out in the 3.75″ form, it was….lacking…even though I did score it 7.1/10 (see review here) mainly because I was more forgiving back then especially for 4″ figures and we just wanted….anything!

A 6″ Marvel Legends figure of Heimdall in his golden armor would and still would be nice.  But until then, Hasbro has given us the “on-the-run” Heimdall that we first saw in “Thor: Ragnarok” before he met his doom in “Avengers: Infinity War” (oops. Spoilers).

This particular wave featured three black action figures: the aforementioned Heimdall, Iron Patriot (War Machine draped in American colors), and Valkyrie. And even though I was like “great, three more reviews I’ll never get to in a timely manner,” I was pleasantly surprised, especially since I first saw this wave at San Diego Comic Con 2019. With the anticipation, does this figure live up to the hype? Let’s check it out… 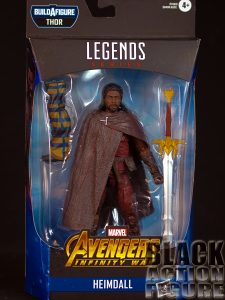 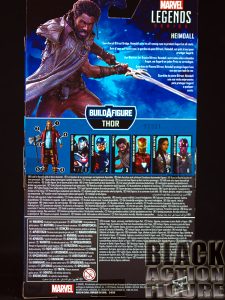 Outside of the errant “Quarantine Thor” build-a-figure leg that is floating next to the Heimdall figure (no, not creepy at all), we also get the Bifrost Sword (more on that in accessories).

On the back we get a quick little bio-blurb and a picture of the character.  Let me say this because I haven’t mentioned it in a while…I strongly dislike that they start putting pictures of the character in a dynamic pose instead of the action figure itself because they know almost in every case there is no way that action figure can do the same pose as the picture they use. False advertising? It is definitely bordering on it…

Anyway, we see the rest of the wave along with the Build-A-Figure, “Quarantine Thor” (yes, I’m calling him that from now on). 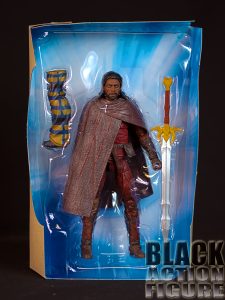 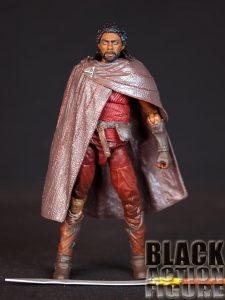 Like I mentioned in the last section, Heimdall is joined by the Bifrost Sword. Which makes sense.  What didn’t make sense is that this sword originally came with a Thor/Valkyrie two pack a few years ago. And to boot, while this is a great looking sword with a good sculpt, it was painted better with that 2 pack.

Don’t get me wrong, I’m glad we get the sword with Heimdall, as we should have. It is beautifully sculpted and appropriately large. I just wish we either got Heimdall back then or they waited for the sword to come out with the figure now. As of now, to some collectors getting this sword again feels…a little redundant.

What I don’t like about the sword is that it is made from that ultra-bendy soft plastic that makes accessories looked warped no matter what you do to them.  I know Hasbro normally does this for the kiddies, but sometimes they have to choose between their adult collectors and “kid safety” as they consistently sit on the fence.

I think I should include Heimdall’s cloak as an accessory which comes off with a pop of the head ( I know, not ideal, but what can you do?). And although I didn’t take any pictures with the figure without the cloak, I think there are enough reasons to do so.

What I wish they had included was a holster for the sword. In the movie, he carries the sword in a holster on his back…and with this figure, it is not possible. You can jam it back there, but it will be a tight fit (that’s what she said. Sorry, couldn’t be helped). 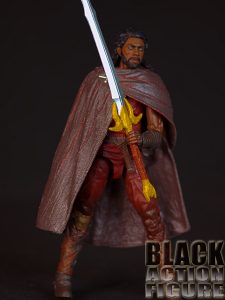 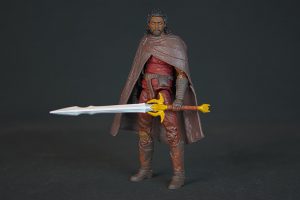 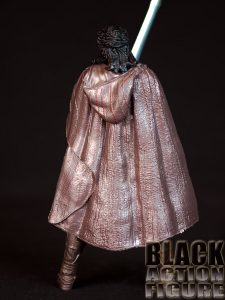 Does this figure look like Idris Elba? Absolutely, down to the color contacts he wears in the film. Hasbro’s face scanning and sculpting technology still continues to be impressive for their 6″ figures, especially considering other high-end lines like Mezco ONE:12 and Bandai SH Figuarts.

Does this figure look like Idris Elba in a bad wig? Absolutely. Granted, in the movie, Idris Elba was in a slightly less bad wig, I’m not sure that the hair sculpting is good. It’s supposed to be a head full of dreadlocks. And with more defined sculpting, I think that’s what it could have been. What it turns out looking like in certain angles is a bad Jheri Curl at best, and the black version of a mullet at worst. And sometimes both.

The figure painted and sculpted well and matches the look and feel of Heimdall in the movie. And while I didn’t catch it at first, Heimdall also has a wound on the lower left side of his abdomen. That’s detail.  But wait! While I didn’t get a chance to show it, if you remove the cloak, the figure also has a cut wound on his right bicep! That was a pretty surprising addition, especially considering that most won’t even take off that cloak!

Besides the hair, this is a pretty good sculpt and likeness of the character. And the additional details make this a pretty likeable figure. 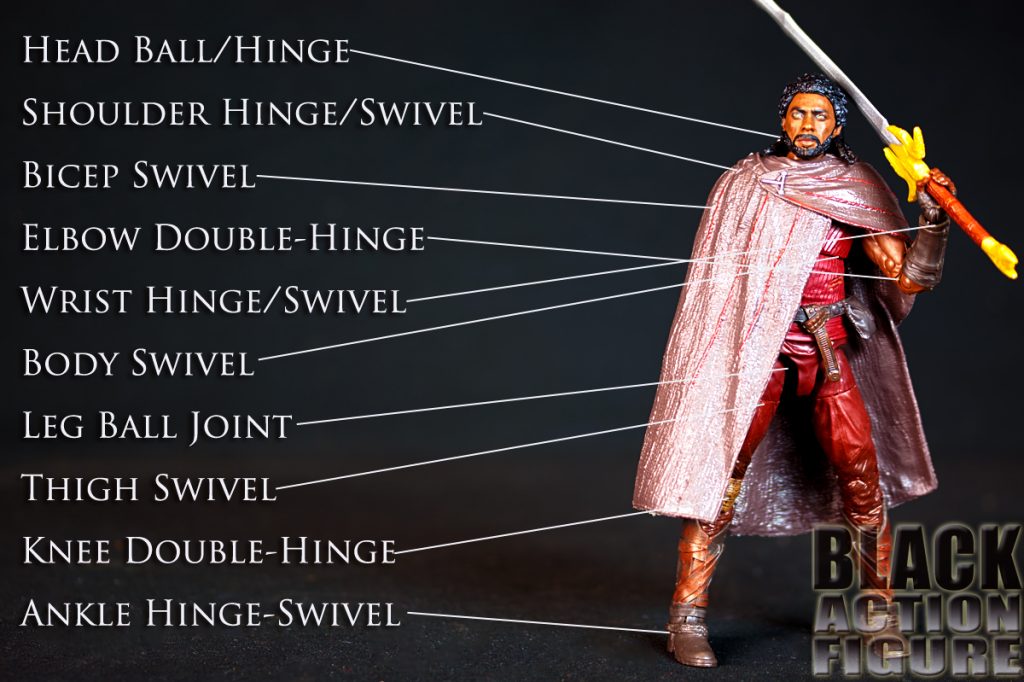 This figure features 29 points of articulation. While Marvel Legends figures normally feature 30 or more, this figure is most notably missing the waist articulation, replaced solely by the body swivel in the abdomen area.

And now to use my new term…”costume blockage.” Does this figure feature any costume blockage? Unfortunately with the cloak on, it definitely does. We are almost completely unable to use the right arm and the head while hinged, cannot move in an up and down manner.

But wait, with the cloak off the head can look all the way down. But the mullet…errr, I mean the dreadlocks….prevent the figure from looking up. Which is fine for me, this is not necessarily a “flying” character. But I do like when we are able to use the full capacity of our figures articulation. 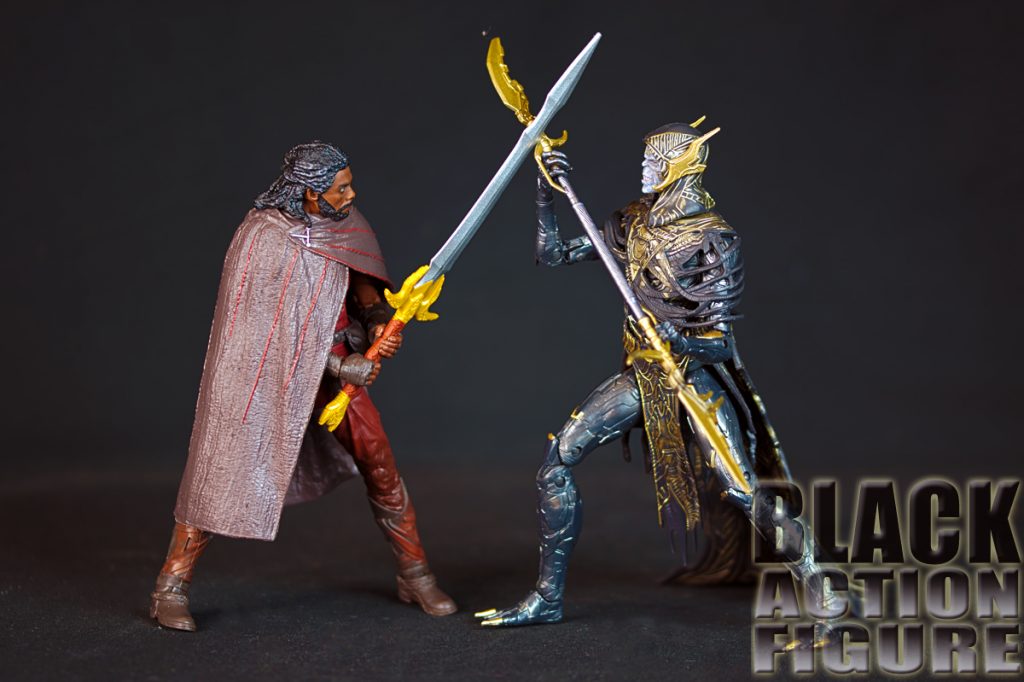 Will we see this character ever again in a movie? I’m not sure. Marvel in general never really kills off a good character (see: “Loki”, “Gamora”).  And the Thor universe often travels to “Valhalla”, aka Asgardian heaven. So there is always a possibility.

If anything, I would like Hasbro to make the 6″ Heimdall in golden armor with removable helmet. I think that one would sell well in retail.

Speaking of retail, has anyone seen this inside a store? I think I’ve seen the remnants of this wave, but this wave did not see a wide-spread rollout like other Marvel Legend waves. As it is now, you may only be able to find this figure at online retailers, and possibly at a premium.  Still, a worthy addition to any collection.