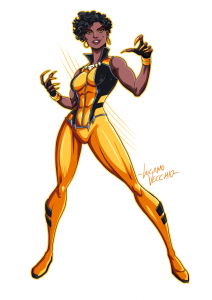 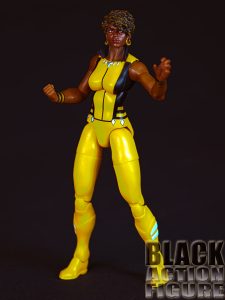 Marvel Legends has been giving us some awesome figures lately…so much in fact, that I didn’t want to drop a whole bunch of Marvel Legends reviews without y’all thinking I was some kind of Hasbro shill. So let’s take a look at the main Hasbro wannabe, Mattel. In one of their last waves of their now defunct “DC Comics Multiverse” line, we get a surprisingly well crafted Vixen figure. This was definitely not expected, but wholeheartedly needed in their dying line. Honestly, if Mattel could pump out figures like this in the Hasbro Marvel Legends way (nearly 80-100 new figures a year), the line may have lived on. Unfortunately due to shoddy work on their figures, a limited and poor distribution model, and collectors throwing their hands up in disgust getting the same 6 characters 30 different ways, the DC Comics line has moved on to McFarlane Toys.  So what is most likely my second-to-last review of a Mattel DC Comics figure, how did it pan out? Check out the review below… 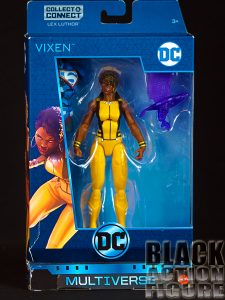 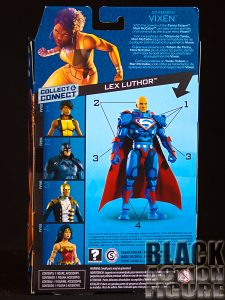 The packaging of course comes as no surprise. While Mattel tried to be innovative revamping their packaging every couple of years, this is now the style that the line died in and I’m not sure if it’s disappointing or a relief that we will never see this packaging again.

To put it bluntly, it’s basic. Nothing about it stands out, especially in the aisle when you’re looking for something new. Even though Marvel Legends has been using the same style packaging design for years, they at least switch up colors of the whole packaging now and then to make finding new stuff joyful. When you see that Hasbro white packaging in a see of black, you say to yourself “oh, there’s that new Spider-Man I was looking for.”  You see this same drab blue packaging and you think to yourself “oh, there’s that Superfriends Batman no one is looking for.”

But ultimately this is me kicking sand in a defunct line’s face, isn’t it?   They at least deserve the basic score for even managing to get this out to us… 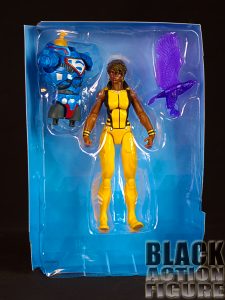 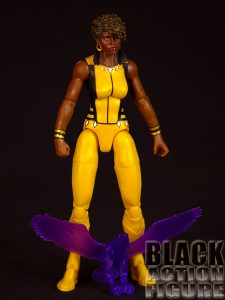 I wasn’t expecting much…which is good because we didn’t get much.

Let’s not even consider the Lex Luther-Superman hybrid “Collect-N-Connect” piece we get with this figure…which I will most likely never piece together unless I find the other three figures in a Ross somewhere on clearance.

The figure’s one and only accessory comes in the form of a ‘totem hawk”. Why this you say? Well, similar to Animal Man (for the two of you familiar with him), Vixen is able to call upon the animal spirit totems to give her their abilities. So if she wants to be super strong, she channels a Rhino or Elephant. If she wants to be quick, she channels a cheetah. In this case, she is channeling a hawk, which presumably give her the powers of flight.

I have seen this power manifest in different ways depending on what comic book, television show, or animated special you are checking out at the time. So I guess a transparent purple hawk could be one of those “manifestations” of the characters power.

Too bad it didn’t include a fake monkey. I would have had a field day analyzing that. 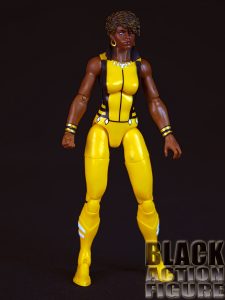 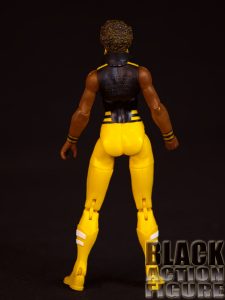 This is probably the most I’ve been impressed with Mattel and their sculpting. They have definitely put out a beautiful sculpt of this chocolate-skinned Black woman…..errr, I should say this is probably one of the few times that I can (or want to) actually use the term “African American” since the character was born in Africa but moved to America…and presumably got her citizenship.

The woman/model/drawing they based this sculpt off of was pretty awesome. They even made the hair look like Vixen is all-natural, a pleasantly surprising change from the apparent “nationalizing” of Black characters in comics (not the words I wanted to use, but I’m trying to keep this family friendly).

In any case, it is a great sculpting job.  Unfortunately, it is not a Vixen I readily recognize from the comic books. I wish I saw the base design this was based on.

The costume seems “New-52” Vixen accurate, It is a good and accurate paint application all around. I’m definitely mad at Mattel for letting this part get almost exponentially better from their previous efforts only to lose this license. This figure would have actually made me excited to see what comes next. 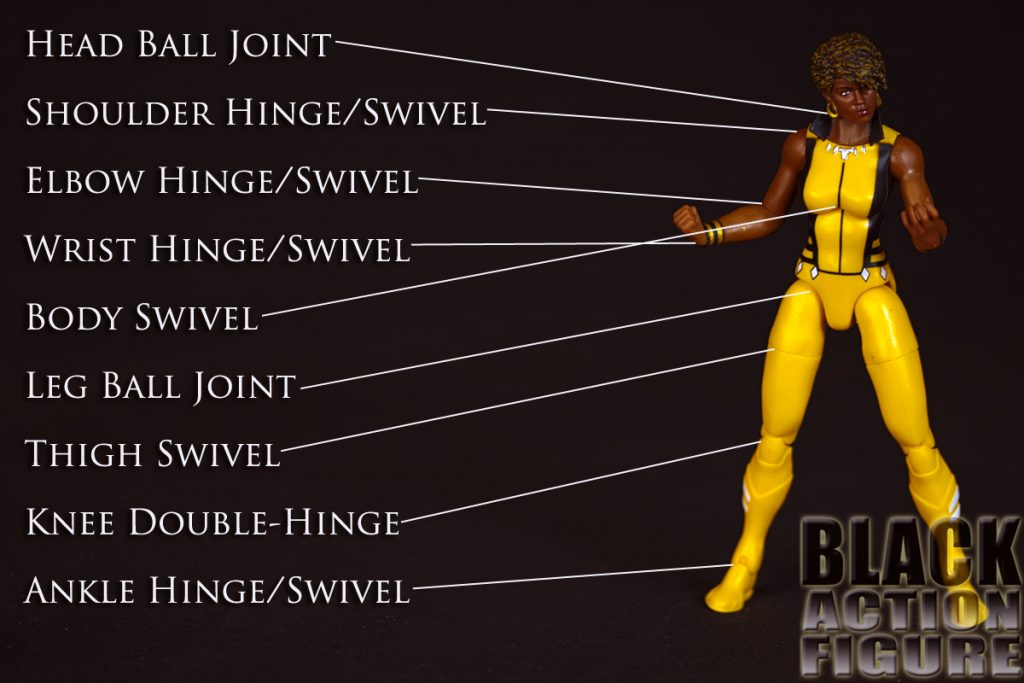 This figure has a pretty remarkable articulation points, at around 26+ points of articulation. But I’m still not impressed. Mattel had a chance to produce a product along the same lines of Hasbro and be just as good with articulation, but of course they have always been behind Hasbro in the articulation realm.

We also get what I’m now calling “costume blockage” where the costume or sculpt somehow hinders a point of articulation. But I just can’t depend on Mattel to have the same amount of head articulation as Hasbro has been using. It’s selfish. But as a collector, me and other collectors notice shit like that. Is it wrong for us to want to pose our characters in some dynamic pose on our shelves? 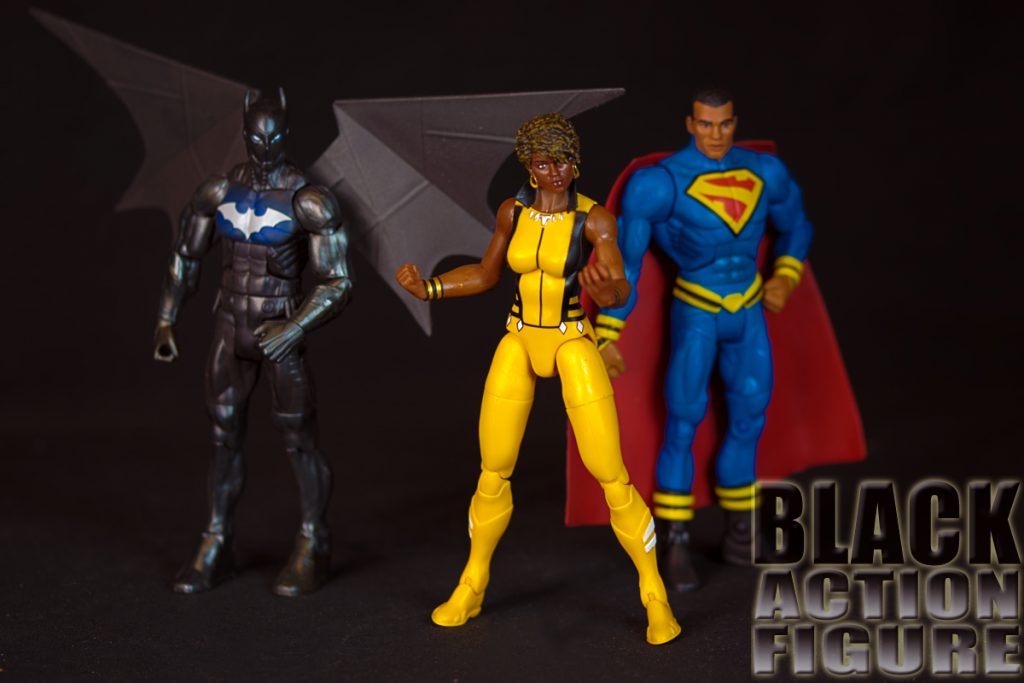 I probably have about one or two more Mattel figures to go. It’s always sad to live through the demise of an action figure line that I have fondly collected (see Hasbro’s 3.75″ Marvel Universe line).

But I think it’s good my first review in 3 months was not another Hasbro Marvel Legend…although the next one most surely will be. This felt like a way to get the cobwebs out of the system.

Can’t wait to see if and when we get a Vixen in the McFarlane Toys line.  Not that I don’t think they would do it, I just wonder when that would be coming.

If you can get your hands on this figure, do it….it will most likely be your last Mattel DC figure for a while.  If you’re looking for it still relatively inexpensive, you can get it still from Amazon at below $30.