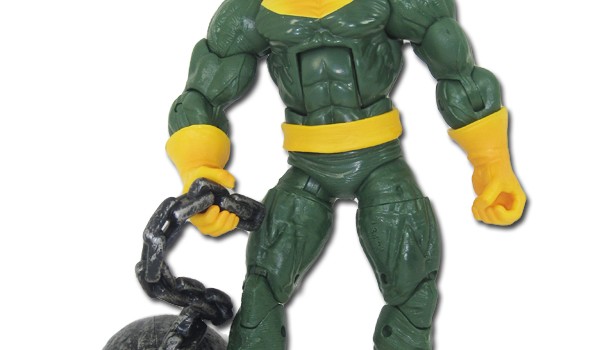 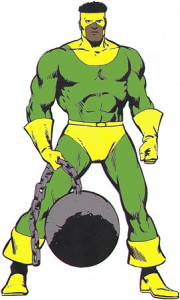 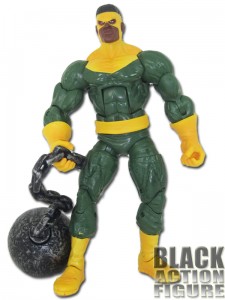 We first saw Thunderball last year during the Hasbro news conference at the New York Comic Con, then again in a finished form 2 months ago during the Toy Fair 2012 in February.  Thunderball is part of the second wave of the Marvel Legends reboot and a welcome addition to the popular return of the series.

Since I’m a longtime reader of Marvel comics, I have a pretty good knowledge of Thunderball and the other three members that make up his gang, The Wrecking Crew.  Thunderball started out as Dr. Eliot Franklin, a physicist with an intellect compared to Dr. Bruce Banner (Hulk).  He used crime to support his experiments, got caught, and ended up in jail.  While in jail, he meets Wrecker, and the other two men who follow him.  Through a series of events, the whole gang escapes jail, Wrecker gets his mystical weapon, and all four transform into superhuman beings.  The other two men in the gang became Piledriver (which we’ll get into later) and Bulldozer and they are known as the Wrecking Crew.  Thunderball later gets Wrecker to enchant a wrecking ball that he uses as his main weapon.

In this Marvel Legends wave, we get two of the four Wrecking Crew members, Thunderball, and what Hasbro likes to call a “running change” figure, Piledriver. 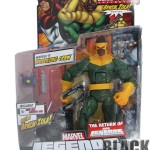 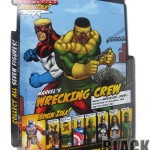 Packaging
I have to say that I’m really enjoying the packaging of this Marvel Legends reboot.  I used to collect Marvel Legends back when Toy Biz was producing them and used clam shells…those things were almost impossible to get open.  Here we have a simple card back blister pack.  To aid in opening the package, the blister pack has perforations along the side.  They made this figure easier to get into than the Marvel Universe figures.

The front has great artwork featuring Thunderball and Piledriver on the front.  The only name you’ll get on the package though is “Marvel’s Wrecking Crew”, so unless you’re familiar with the Wrecking Crew, a random person would not know who these characters are because their name does not show up anywhere on the package!  They did make space though to include two “Build-A-Figure” spot.

The back has more of the same great artwork with a little blurb about the Wrecking Crew wrecking things.  That’s it.  It also has a picture of the rest of the figures in this wave…but not all of the figures.  Not pictured are the two alternate characters, maskless Dark Wolverine (Daken) and Future Foundation Spider-Man, and the two “running-change” figures, Piledriver and Madame Hydra.  That is a lot of collecting!  My only real gripe about the packaging is that if you are a mint-on-card collector, you have to be careful with the edges because they tend to bend easily.
Score:  8.5/10 (Great packaging, but no character name, and easily bendable corners) 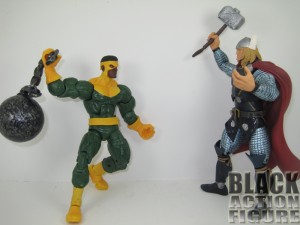 Accessories
I am loving the accessories with this figure.  Included is Thunderball’s signature enchanted wrecking ball.  The ball itself is hollow and light, but pretty solid and allows Thunderball to be posed with it in hand in various positions.  The only thing that could change about the wrecking ball is if the chains weren’t molded into one position.  Maybe figure out a way to make the chain portion bendable with wire. 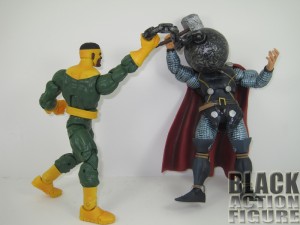 He also comes with a Build-A-Figure piece of the head and remote control of Arnim Zola.  In the running change figure Piledriver, a Arnim Zola head with a red eye instead of the yellow is included with the figure.  What is strange though is that Piledriver also has a wrecking ball packed in with him, although he doesn’t use one (or anything) as a weapon in the comic books.  So Thunderball has a weapon and a spare.
Score:  9.0/10 (Expected a wrecking ball, and got one…although not without issues) 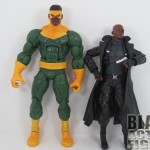 Sculpt/Likeness
Let me first say, this is a pretty large figure.  For a six-inch based set, Thunderball is nearly seven inches tall and is as tall as the Marvel Legends Thor.  There is a good chance that he could even fit in with some of the Marvel Select figures (a seven-inch based line of figures).

That being said, Thunderball has an awesome head sculpt with distinct African-American features.  The prominent scowl on his face shows his opponents that he means business.  His costume is more up to date (boots no longer have cuffs and slight changes to his costume).  He wears a belt which is WAY too loose.  I have read other reviewers complain about it, but I shrugged it off until I got my hands on it and just like those other reviewers, I am not crazy about it.  Other than that, this figure is comic accurate.
Score: 9.0/10 (Comic book accurate likeness, belt on figure is a little weird) 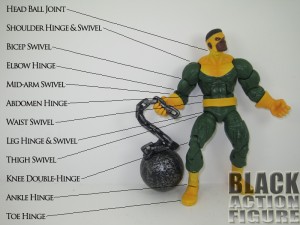 Articulation
This is my favorite part of the review.  I have to admit, I did not have high hopes for this figure, especially in terms of articulation, but it turns out that this figure has some of the best articulation in the line.  This figure has nearly 30 points of articulation.  I was really not expecting that.  My only concern is that as I was posing him for the photo shoot, his legs started to get a little loose from usage.  Not much of a concern really.  I guess if I had to complain, the only thing missing is finger articulation, but really, who is missing that?  I always had a hard time getting my character to hold anything with articulated fingers, so sculpted hands is more than acceptable.
Score: 9.5/10 (High articulation was a pleasant surprise, although joints got loose from usage) 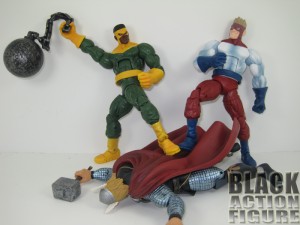 So Thunderball measured up pretty well in almost every category.  Outside of the somewhat lame costume (which isn’t his fault), I think that this figure (and his partner Piledriver) are a great addition to the Hasbro Marvel Legends line.  I only hope that the next wave of figures (or a future one) features the other two members of the Wrecking Crew so that we can complete the set.  Definitely a great add to your collection!

This and all figures featured in this review are now available in the BlackActionFigure.com Store!
http://astore.amazon.com/blackaccom-20/detail/B006CD0AX6 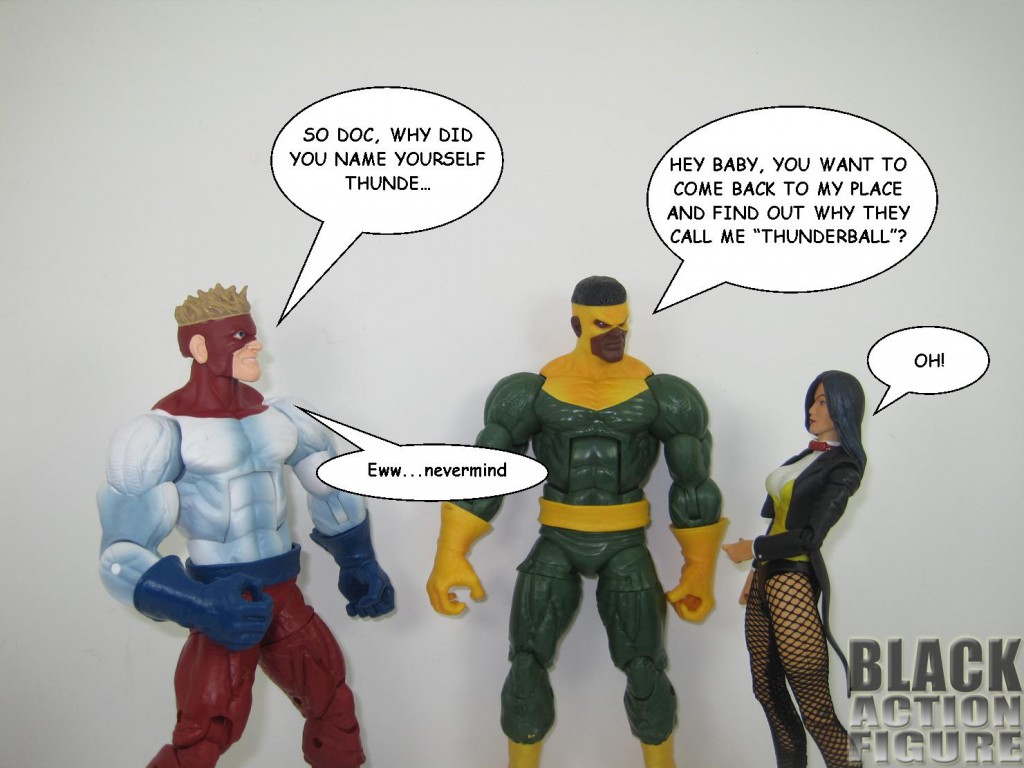 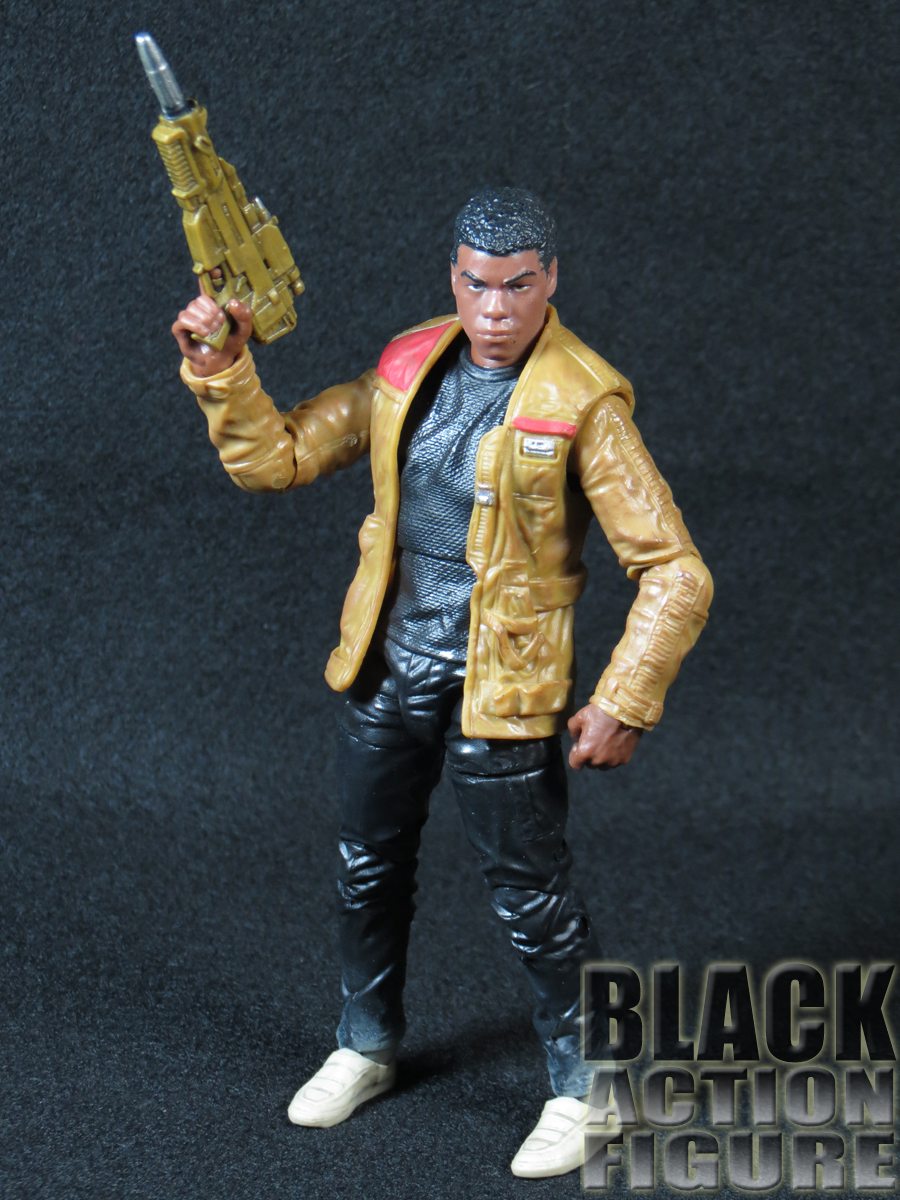