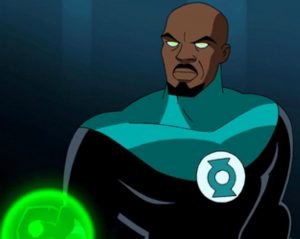 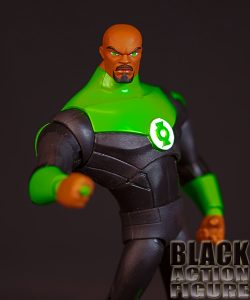 Well, McFarlane Toys did it! They took over the DC action figure license from Mattel after 15+ years and came out the gate running. The first wave of figures from the start of their 3-year license agreement with DC has started to hit stores starting with 9 different characters. And to add insult to injury, they are making the whole line in the 7-inch scale, so instead of just continuing to cherry-pick the offerings from McFarlane Toys, you now have to decide if you want to go all in on this new scale with the same characters.

So with all that now swirling around in your heads, is this figure worth the pick up? Check out the review below… 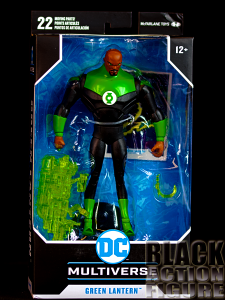 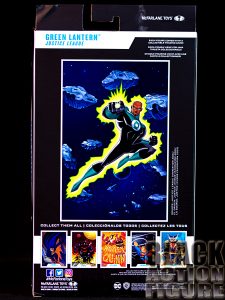 One thing I have to say about Mattel, they really tried to spice up the figure by upgrading their packaging. While Hasbro now hasn’t done any major upgrades to their packaging in years, Mattel found new and interesting ways to package what most times turned out to be mediocrity.

Fast forward to today and…let’s say I am not impressed. The packaging is basic….like BASIC basic. It’s almost like if someone designed a pamphlet in Microsoft Publisher rather than Adobe InDesign or QuarkXpress…the basic elements are there, it’s just not put together in an appealing fashion.

The front has a basic window showcasing the figure and accessories. The back has a picture of the character as he appeared [in this case] in Justice League Unlimited. Along the bottom are character shots of other figures in the line. The totally weird thing about this? There are no shots of any action figures at all. And for an “action figure” line, why would no shots of the figures themselves even appeal to a collector?

The other interesting thing was the recommended age bump up. Mattel’s DC Comics Multiverse figures had a recommended age of “4+”. This line is touting a recommended age of “12+”. Not necessarily because this figure would be dangerous for kids between the ages of 4-11, but in my humble opinion it could rightfully appeal more to adults, especially those looking to justify their “plastic addiction”. 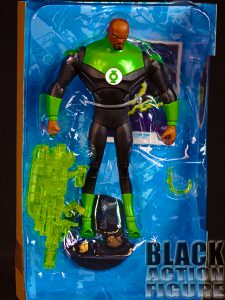 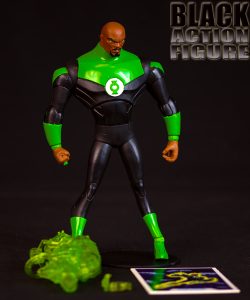 First off, the action figure stands and the collectible cards are back! McFarlane Toys, taking a page from the 3.75″ Marvel Universe figures and other action figure lines of the past have brought back included action figure stands, a practice that both Mattel and Hasbro eliminated years ago. I was actually excited to see this 5-cent piece of plastic included with the figure. The collectible card while nice, is rather unnecessary…I’ll probably just throw it in a drawer and forget about it.

The other accessories include a ring-generated big ass rifle, and a head scope (thingie) that goes around the figure’s head. I actually had to look up where the head scope goes since there are no pictures on the box or no included instructions.

With a Green Lantern figure, McFarlane Toys could have come up with anything as an accessory as long as it was cast in that green translucent plastic. What they chose to produce is kind of lackluster…”Green Lantern has the most powerful weapon in the universe and he chooses to make…a gun.”  Yeah, seems kind of ass-backwards to me.

Oh, and why are we still getting Green Lantern figures….without an actual green lantern?! Why is that not important for manufacturers to get. They want the “collector crowd” but then don’t cater to them. I would have done better with a green lantern and maybe a lantern blast coming out of the ring rather than this big freakin’ gun. 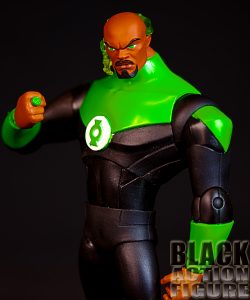 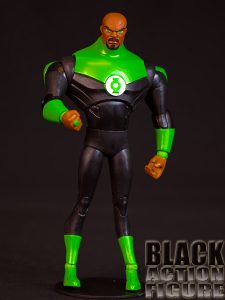 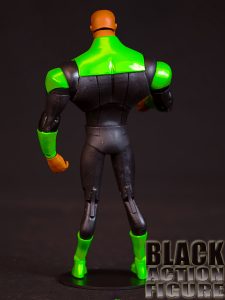 I’m going to start with what I really like about this sculpt first. The headsculpt is so on point with this figure! The determined, expressive look on the figure’s face, the green eyes (a side effect of the Green Lantern ring), the perfectly sculpted and painted facial features. McFarlane Toys is 100% on point with this headsculpt.

The overall body type, while hard to stand and pose (more on that in the “Articulation” section), is very indicative of the Bruce Timm-style of animated Justice League characters. This includes big, beefy top side with skinny, gangly legs. Completely unproportional by any real world standards, but it worked in the show.

What I didn’t like was the uniform. The design team saw fit to add some extra detail to the uniform, so if you were going for animated show accurate, look elsewhere. I will say I do like the added designs, but because of the inaccuracy to the source material, I can’t rightfully accept it.

I also want to say that compared to the Green Lantern in the show, the green used to paint the uniform…is the wrong shade of green. On the uniform, we have a bright green paint deco which again looks awesome, but shies away from the source material. I mean, the source material is on the back of box AND on the collectible card on the inside…yet they are far from making it look nearly the same. The green used on the figure is closer to the yellow side of the spectrum while the green used on the character in the show is closer to the blue side of the spectrum.

So I have to ask, why rush to market with such a glaring inaccuracy? Was it done on accident where they just decided to go with it, or was it done on purpose and we are all just to accept what they give us? We most likely will never know… 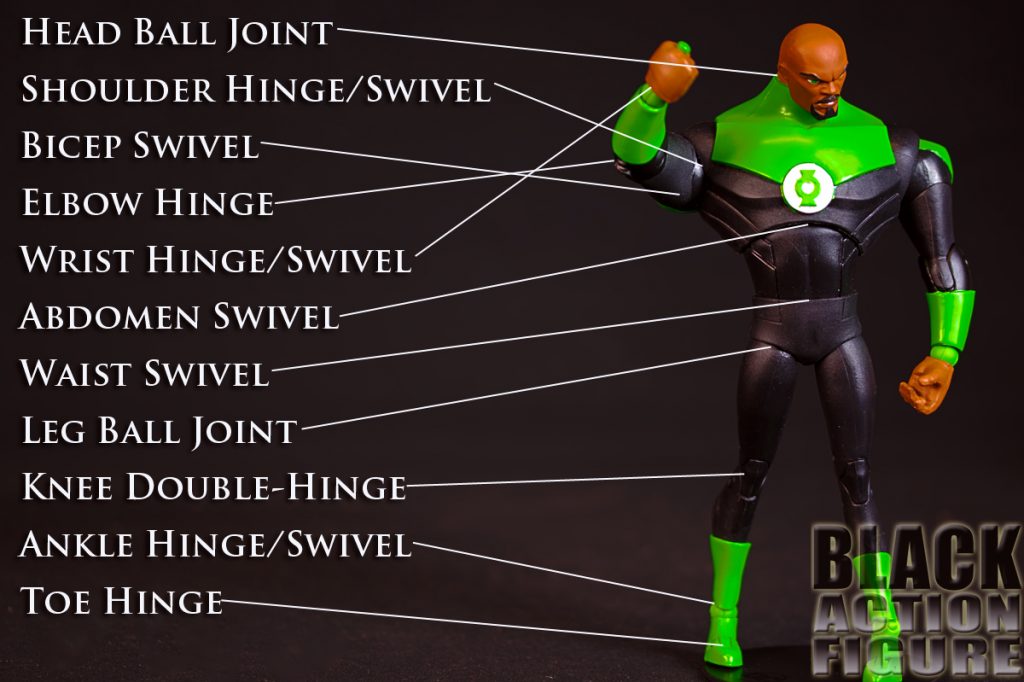 First, the shoulder is weirdly manufactured, with an extra “shoulder cover” for lack of a better term.  I’m not sure if it’s used to give a greater range of motion in the shoulder area or if it is used to hide some of the seams. Definitely not what I was expecting, but with McFarlane Toys, I really didn’t know what to expect.

The neck is weird too, and I’m not sure if this is a sign of the figure trying to match the animated character or if this is a trend with McFarlane Toys. What I have also found is that the neck can articulate the head looking down, but does not look up at all. Very disappointed by that.

I’m glad that a figure stand came with this figure…otherwise I don’t think I would have been able to stand it up. And the joints of the figure itself is strange. The legs seem a little too loose, while the arms and neck seems like they’re a little too tight, requiring some level of force to get them to move.

The whole thing reminds me that this is a McFarlane figure. McFarlane hasn’t had consistent articulation in their 25 year history. I remember one of my Spawn figures being really great at articulation, but can’t think of much else. 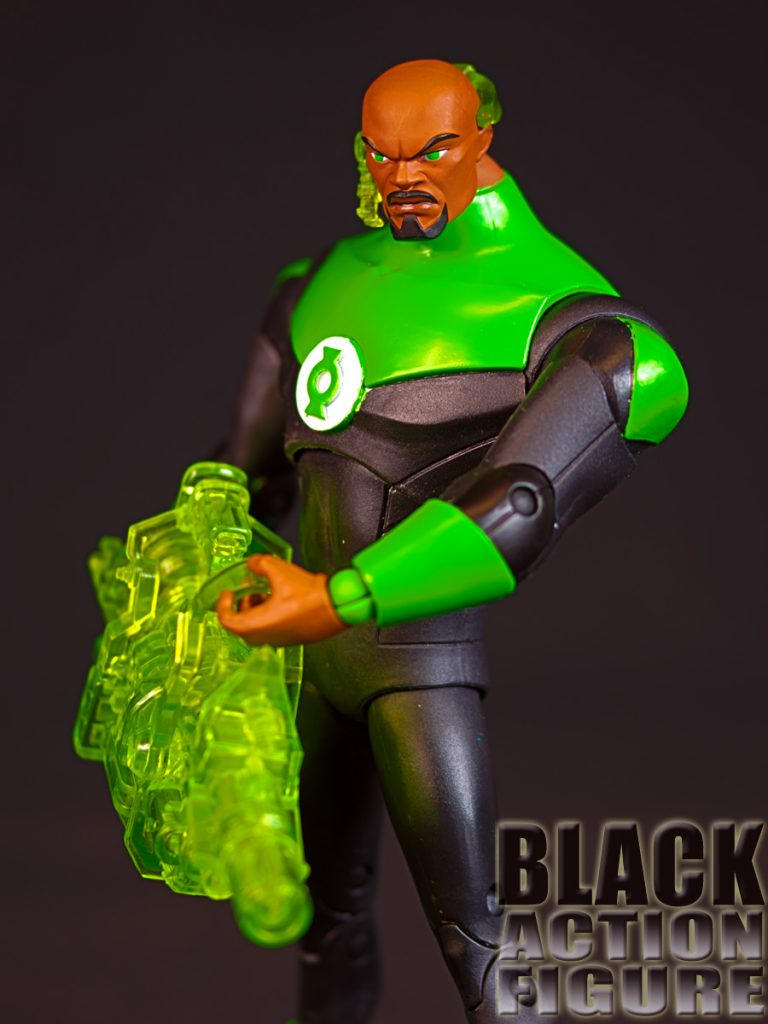 There verdict is still out whether the McFarlane Toys takeover of the DC Multiverse license will ultimately benefit our collections. With this Green Lantern figure, I’m not impressed so far.  I’m not sure if this is based on the fact that they started with an animated Bruce Timm style figures (including Green Lantern, Batman, Superman, and Timm/Dini creation, Harley Quinn) or that they have introduced another scale to the mix.

Now granted, this scale should be along the same lines as the Marvel Select figures (I haven’t done a comparison yet), but truth be told, I haven’t been all in on Marvel Select for a long time. I was waiting and hoping that this would be along the lines of Hasbro Marvel Legends, kinda sorta like what DC Collectibles is doing with their DC Essentials line.

Don’t get me wrong…this figure may look great standing along with other McFarlane Toys DC Multiverse figures…but I’m tired of DC rebooting their toy lines every couple of years. I want someone to have the consistency of Hasbro and even to the point of putting out obscure figures that may appeal only to fans.I would love to get to that point someday.