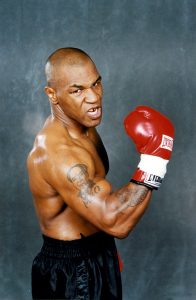 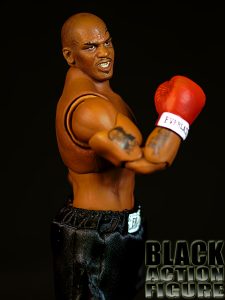 Remember when the greatest athletes or entertainers were seemingly named Mike/Michael? Michael Jordan ruled the basketball court. Michael Jackson ruled the airwaves.  And we laughed in amusement and in disgust when Mike Tyson would take out an opponent in under a minute.

Fast forward to now and Michael Jackson has passed away and his legacy is muddled in controversy, Michael Jordan is holed up in retirement probably gambling his millions away, and Mike Tyson makes various cameos highlighting the time he bit Evander Holeyfield’s ear off.  And yes, Tyson has somewhat redeemed himself with his uber-hilarious “Mike Tyson Mysteries” animated show, but we will never experience the time he hit someone so hard my television shook.

BUT…we can immortalize and celebrate his career by buying his likeness in plastic (at least for as long as plastic is immortal).  Storm Collectibles years back started to put out 1/6 scale figures of this legend that seemed grossly overpriced ($300-$350). Even though some of those versions are still available, I hesitate to drop that type of money on a figure. Luckily Storm Collectibles started to produce smaller scale figures in the 1/12 scale range at a more reasonable cost. Let’s check out the review… 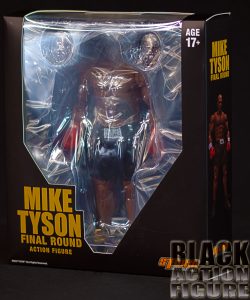 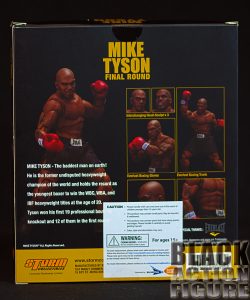 You can almost tell when you get the box in hand that this is not for your typical collector.  And you almost get instant confirmation as the packaging declares in the upper right corner that this figure is meant for “Age 17+”. So basically adult collectors as this is not a “toy” but a “collectible figure”. (I’m sure somebody sees the distinction)

While you can tell the packaging is meant for the serious collector, I am bothered by looking into the front window as the figure is marred by packaging plastic. I appreciate the company wanting to protect the details of the figure, but I feel sorry for “mint-in-box” collectors who won’t be able to enjoy the distinct nuances of their new figure. Oh well, screw them, can’t wait to pop this bad boy open.

On the box, we get promotional shots of the figure that you can’t see from the front. Which is nice if you’re not going to open this thing. At least you know what it’s supposed to look like. I really like the arrangement of the figure and the bio-blurb.

Unfortunately my enjoyment of the design is hindered by the white, legalese warning sticker slapped on the bottom. I guess it had to go somewhere. Interesting to note is that this warning sticker has “For ages 15+” on it. So is it for 17+ or 15+? And why do I care because I waaayyy beyond both. 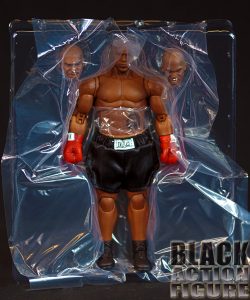 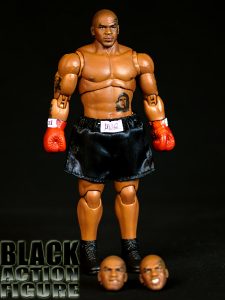 I halfway expected some of the same accessories in a smaller scale then what you get with the 1/6 figure. Silly me.

What we do get is three different Tyson headsculpts. We get neutral face Tyson, half-scowl Tyson, and full-scowl-ready-to-bite-that-ear-off Tyson. Since this is the “Tattoo” version (they do make a non-tattoo younger version which is basically the same figure with different headsculpts), all headsculpts feature his infamous face tattoo.

I appreciate the two additional headsculpts, but I guess I was looking for championship belts, ungloved fists, robe, etc. Nope, none of that.

I never know if you can count the removable soft goods clothes as “accessories”, but if you are someone who does, you can also count the boxing shorts. Although personally there is no reason in hell to ever remove those shorts. They should be glued on. 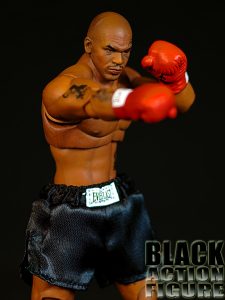 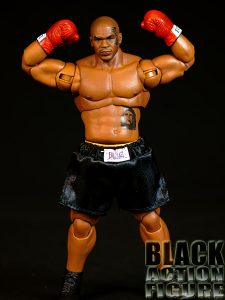 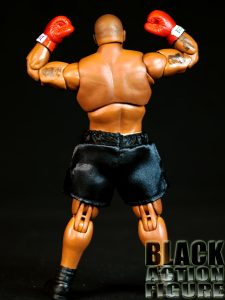 Since you’re pretty much paying a premium price for what is basically a 6″ figure, it better look like the person or character. Fortunately this does. They have captured Mike Tyson’s striking likeness down to the gold tooth in his mouth.

The tattoos across the figure’s face and body are distinctly accurate to the real Mike Tyson. The gloves and the shorts are appropriately adorned with the “Everlast” brand on them. I can say this truly feels like a tiny Mike Tyson.

I do have a couple of minor grievances. One, all of the wonderful articulation I will talk about in the next section includes joints and hinges that take away from the likeness. I wish there was a better way to handle merging great articulation with accurate likeness. Some companies come close but no one has hit that nail yet really.

And two, more a gripe than a grievance, but the tattoo’d head is more of the older Mike Tyson, but the body sculpt suggests a younger, in his prime Mike Tyson.  I think there should have been a more accurate, thicker Mike Tyson that would have fit this particular era in his career. 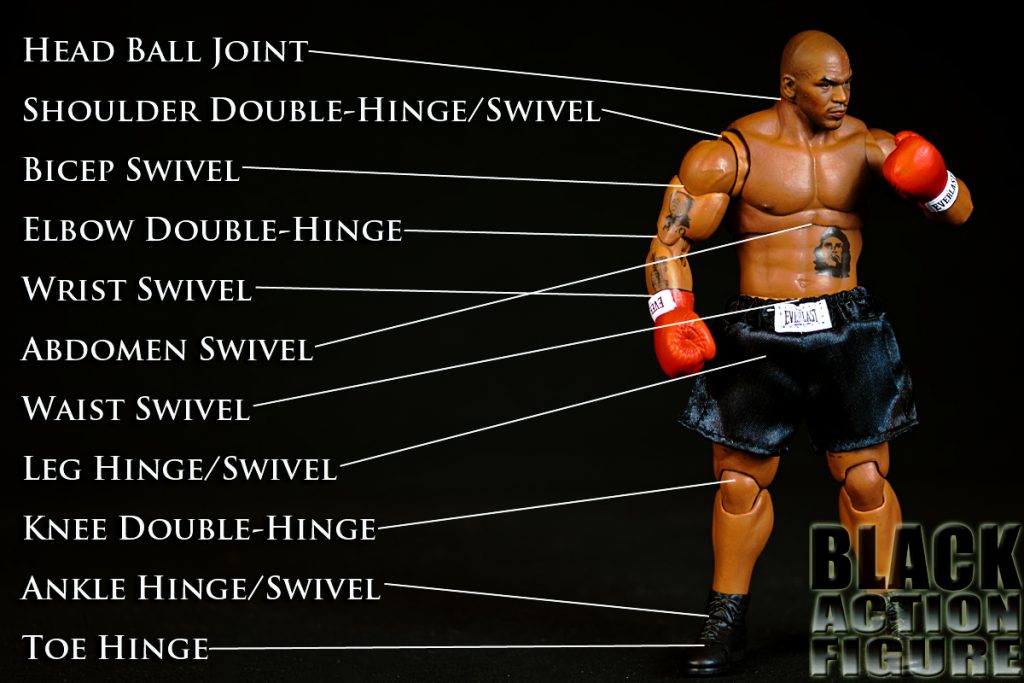 I suggest that if you’re an action figure collector, you should diversify your collection to experience how different toy companies handle articulation. Get away from the Hasbro and Mattel figures and check out a Mezco One:12, SHFiguarts, or in this case a Storm Collectibles figure. The articulation is a world away from your typical Marvel Legends figure.

This Mike Tyson figure comes with over 32+ points of articulation, and to be honest, that may be a slightly conservative number on how you count articulation. The joints are never too stiff and the figure holds its pose.  The balance on the feet are great. I sometimes consider how long it takes me to pose the figure and take the picture when I’m talking about articulation and then hold that pose when I set it up. Sometimes this can be the most frustrating part of the process, but with this figure, I had little to no issues.

A couple of notable points of articulation includes the double-hinged shoulders which allow a greater range of motion.  Reminds me of Hasbro’s recent Spider-Man figures. We also get an articulated toe hinge…again a reminder of the Toy Biz Marvel Legend days.

I wish there was a greater range of motion in the figure’s head allowing it to look up and down better, but that may be my only issue with the articulation (outside of some of the ugly joints, but I won’t count that against the articulation of the figure). 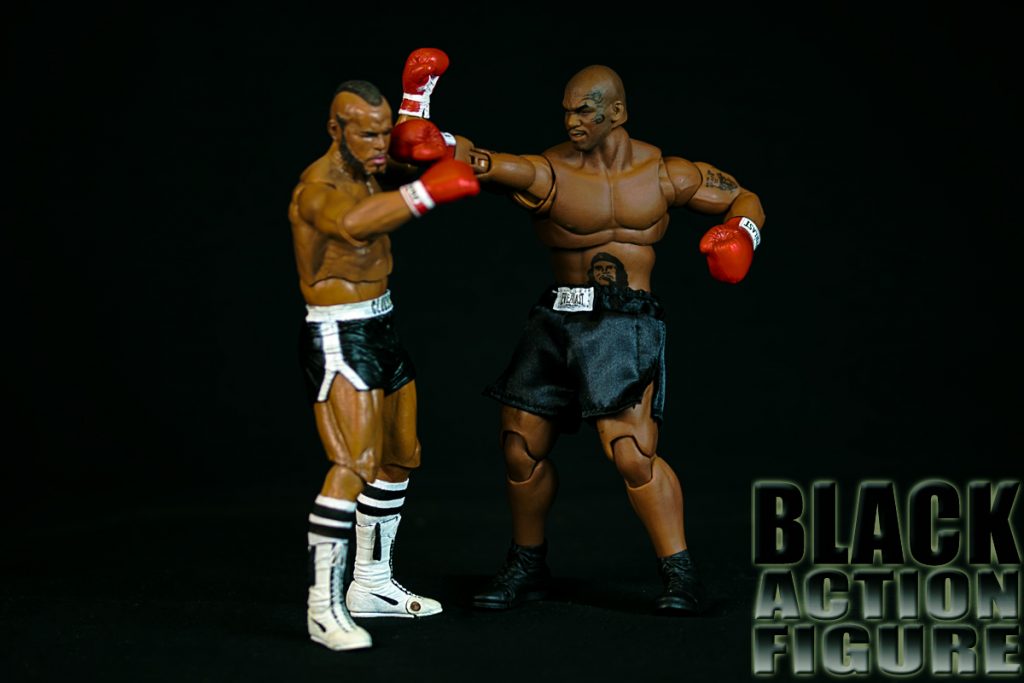 While I enjoy this 1/12th scale figure, I still plan on purchasing the 1/6th scale figure one day. Until then, I’ll have fun pitting Tyson against the likes of Mr. T and Apollo Creed.

Not much more to say about this figure. Definitely a plus to my collection and I’m sure he will be to yours!