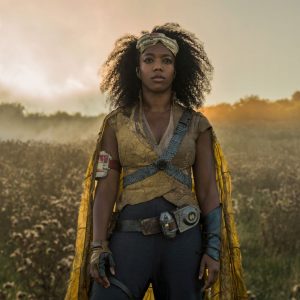 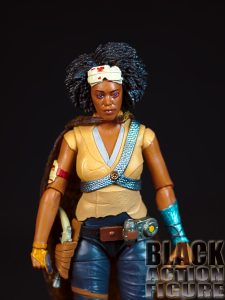 The wait is over! “Star Wars: The Rise of Skywalker” is here and…yeah, it was okay. We got some of the answers we were looking for. We had some good WTF moments and some bad WTF moments…and then there were the parts that were just…THERE.

What it does give us is another Black character for an action figure. Honestly not sure if this is good or bad, but let’s check out the review and see how it turned out… 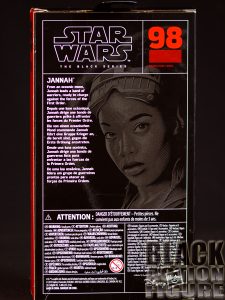 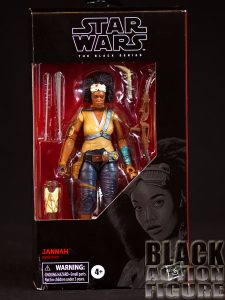 I have to say, packaging felt almost as generic as the character.  The front shows a drawing of Jannah and her name.  That is pretty much it. We have no idea where Jannah is from (Kef Bir is where she is found, if any of you were wondering).

All right, cool, that was the front. The back must be good. Nope, more of the same. We do learn that Jannah is from an “oceanic moon” and leads a “band of warriors” but that’s about it. Oh, and if you care about such things, this is figure 98 in the Star Wars Black series (let’s not even start on the numbering system…).

I really don’t care anything about this packaging outside of the fact that it contains a figure of a new character…and that’s it. At the time of purchase I was hoping that the movie would shed light on the backstory of “Jannah”.  Unfortunately, the character is as generic as this packaging. 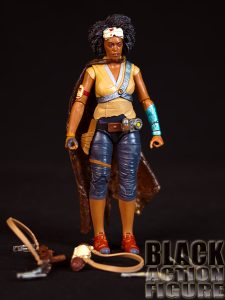 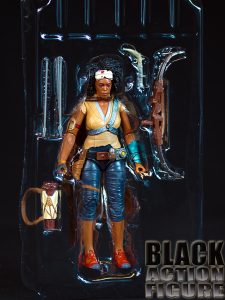 I was actually excited to see the amount of accessories that came with this figure. And all of them are significant to the character and the movie.

The accessories included are a bow, a quiver, a single arrow that fits in the bow, a group of arrows that fit in the quiver, and a blaster that looks more like a pistol from the 1700s than a laser gun (the blaster fits in the figure’s molded holster).

My excitement for such great accessories began to wane greatly when I started to discover a few things. For one, the quiver looks like you should be able to sling it across her body, but only if you feel brave enough to remove the figure’s head. Problem is, I tried and was pulling with significant pressure to no avail. Okay, no quiver across the body.

Then I tried out the bow and arrow and placing it in the figure’s hand. Okay, second problem…there is no bow string on the bow. There is a strap that again can be slung around the body of the figure, but I really wanted that bow string. I mean, I could jury rig some thread to play as the bow string, but that was putting in too much effort, so I gave up even trying to pose the figure with the bow and arrow altogether.  Not to mention the fact that trying to do poses with it in the figure’s hands is pretty much useless.

Blaster it is! At least it fits in the figure’s hand and the holster on the figure’s belt.  Thanks Hasbro for including accessories and then limiting actually wanting to use them.  A 9.5/10 for good accessories -1.5 for actually being able to use them and another -.5 for missing something as simple as a bow string… 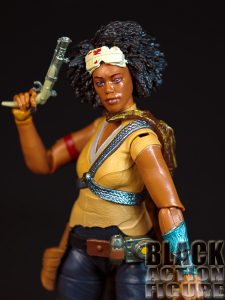 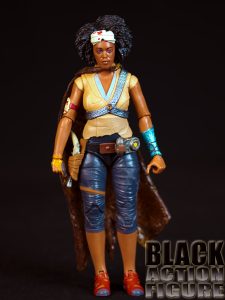 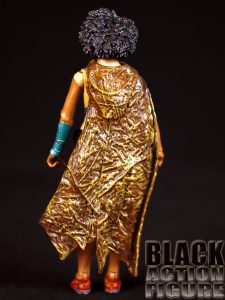 Naomi Ackie is still a relative newcomer but still recognizable from the small amount of work she has done. I still had to Google search some images of her to compare to the likeness of the headsculpt.  And I have to say…it’s aiight (“all right” to those who are not familiar with that colloquialism). It’s not ugly…but it’s not pretty. Well, not as pretty as Naomi Ackie herself. To me, this is probably one of the lower quality jobs since Hasbro has been using the new face sculpting technology.  Definitely a downgrade from awesome sculpts of characters from Hasbro like Okoye and Nakia.

Even the expression on the sculpts face leaves a lot to be desired. Again, as generic and bland as the character itself.

The costume likeness is technically correct, but I don’t get the feel of “weather-worn” of the outfit like the one the character is wearing in the movie. Customizers will usually suggest a “wash” of some type to give it a worn look, but if you’re not that saavy, you will have to deal with that “fresh out of the dryer” look the figure is rocking.

The hair is okay and it gives customizers another option for a head sculpt of a Black female with natural hair.  Somehow though, the hair never feels or looks quite the same as the character and again the likeness is lost on me. 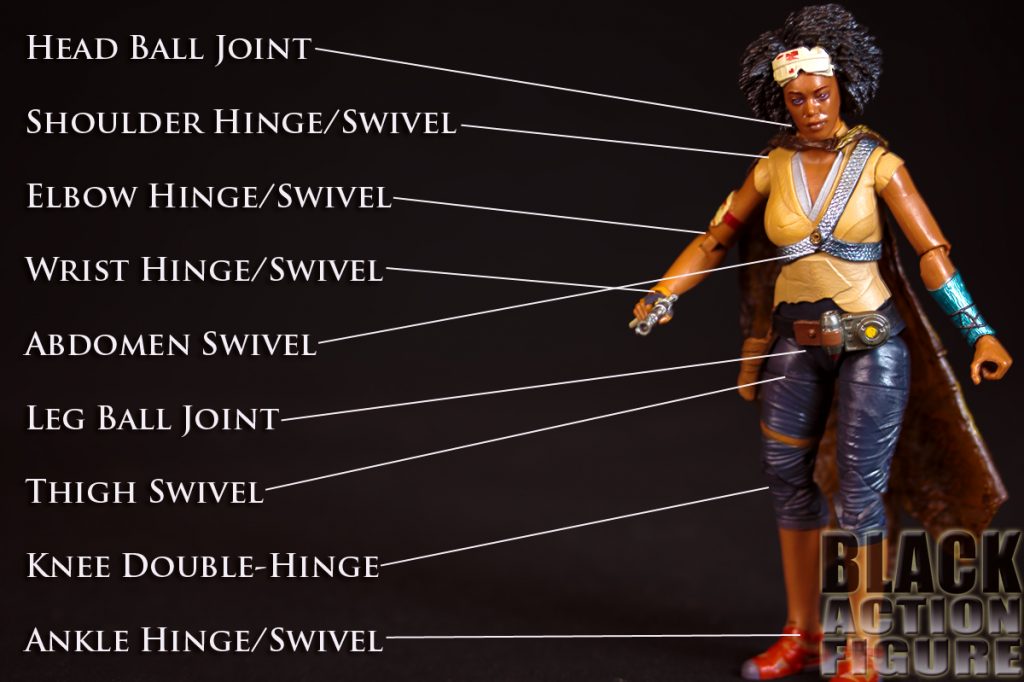 With 26 points of articulation, this should potentially be a high scoring category, but little things take away from the score. Stiff joints in the ankles almost didn’t allow me to bend the ankles causing the figure to be seriously off-balance, mainly because of the cape.  The hair on the figure, which is usually a deterrence of articulation, doesn’t fail to disappoint and hinders a full range of motion in the neck area. And the articulated elbows have a limited range of motion which does lend to working a bow and arrow accessory very well.

All in all, an okay effort. 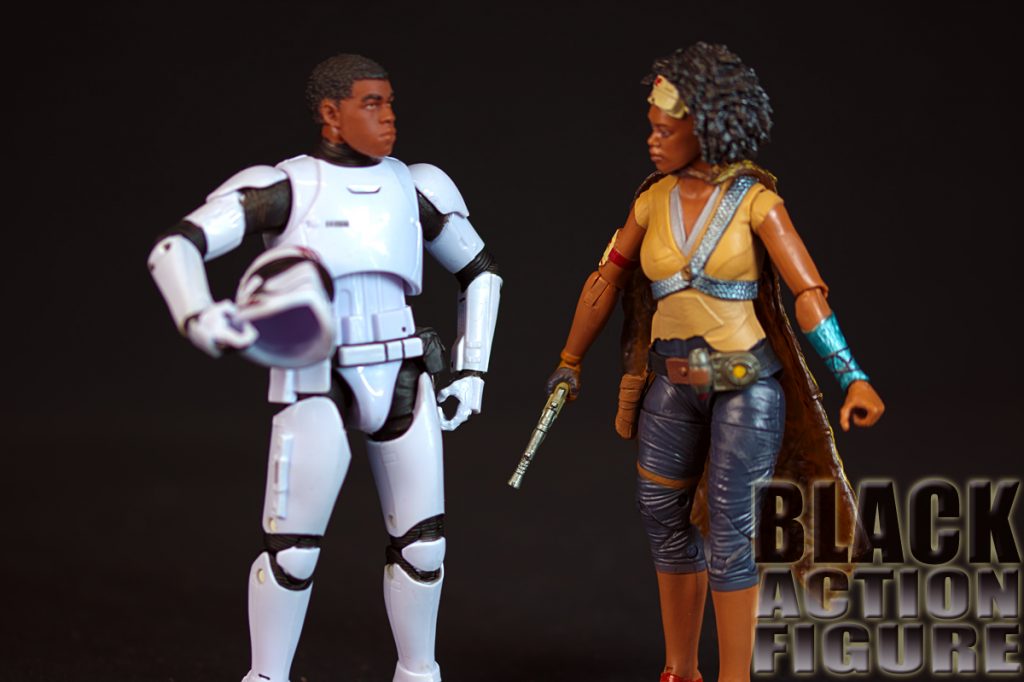 Before the movie, I was generally excited for some side-arc tangent storyline of this character. After the movie, I almost could care less about this character. If this wasn’t a Black female figure in the Star Wars universe, I honestly would have left it warming the pegs next to the countless Wasp and Pink Ranger action figures.

I’m kind of wondering if the movie left a bad taste in my mouth. If you have watched the movie, I encourage you to Google this character to find out some more backstory and why it was left out of the final edit.

With all the promo shots of her and Finn, you would almost think that she could have potentially been an added point to Finn’s love dodecahedron and still could very much be, but we will never know.  The Skywalker saga is over…