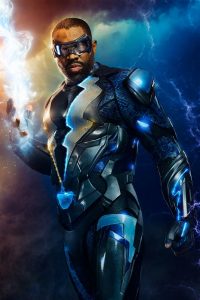 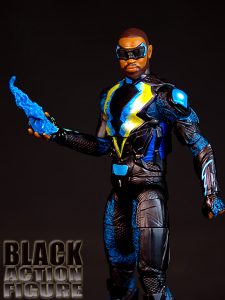 It’s the end of 2017 and everyone was waiting in anticipation for February 2018…that’s when Black Panther was going to release in theaters.  DC and the CW seemingly tried to take (or share) some of that thunder (no pun intended) by releasing their own resident Black superhero first in January 2018…Black Lightning!

Now Black Lightning has had an interesting history over the last 40 years, both in comic books and in other media like cartoons, animated series, etc. He has been copied by his own company to avoid paying the creator for the rights to use him (remember Black Vulcan?). He has been underused, underutilized, misunderstood etc.  But thanks to program creator Salim Akil, this show changed all that.

Fast forward to a year and a half later, and after two successful seasons of this show, Cress Williams no longer has to live under the shadow of playing “Scooter” from “Living Single.” His character is due to join the rest of the Arrowverse later this fall after the big “Crisis” event coming soon. And we are inundated with tons of merchandise from this successful franchise…wait, that’s not right….this is the first action figure from the television show? That just can’t be right…well, I guess this is it. So until we can get that two-pack of Thunder and Lightning that has yet to exist, let’s check out this figure… 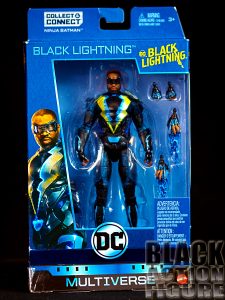 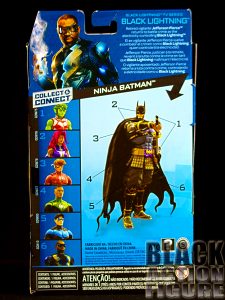 Nothing surprising about the packaging. It looks as good as DC Multiverse’s other figures, showcasing the figure in a collectible friendly box displaying the accessories inside.

On the back of the packaging we get a quick bio-blurb, a listing of all of the figures in this wave, and the “Collect-&-Connect” figure of Ninja Batman.

I really have nothing more to say about the packaging. It’s getting to be a little generic though. I picked this up at SDCC and I probably looked over it at least three times before my eyes picked up on it. And then my mind had to click that this was the new Black Lightning action figure and I did not have it yet.  I think the generic-ness of the packaging did play a role in this.

Nevertheless, I still picked it up and I’m happy to get it. 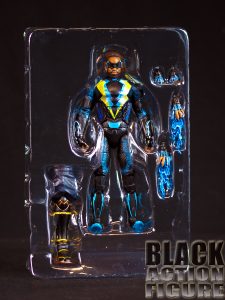 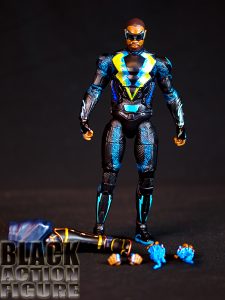 I can respect with what Mattel was trying to do with the accessories. Outside of the Ninja Batman Collect-&-Connect piece, we get two extra sets of hands, a set of hands with closed fists, and a set of hands holding lightning which are molded into the hands. This along with his “gun-holding” hands that the figure comes with.

When it comes to energy blast accessories, I think Hasbro is the king there. They may only have 3-4 different energy blasts that they include with their figures, but they work well with them.  It seems that Mattel is still trying to figure it out. It’s not that hard. If you have a Superman figure, have some heat vision beams coming out of his eyes. If you have a Black Lightning figure, have tons of detachable lightning accessories. It should be just that easy.

So when we get two hands that have molded lightning that looks more like fire is coming out of them, it drives me insane. I guess I’ll just be thankful that we got something period. I guess. 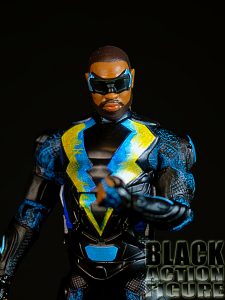 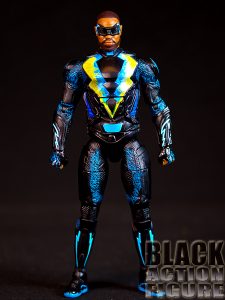 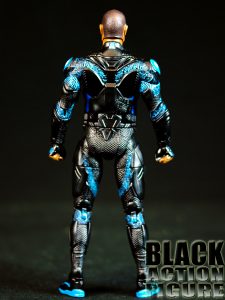 I feel Mattel cheaped out on this one in terms of sculpting in terms of head sculpt and costume.

The head sculpt could be Cress Williams. But with that big mask over his face, it actually could be me. I often wonder how people on the show have not connected the dots more often. “Principal Pierce is 6’5″ with a beard and Black Lightning is 6’5″ with a beard and always hanging around Principal Pierce’s daughters.  I wonder who Black Lightning really is?”  This is how I feel the show goes.

But this figure? Really it could be anybody. It could be Cress Williams.  It could be Luke Cage with a mask. Dammit, it really could be me.  All that to say that the sculpting is good, just really generic.

The overall costume is nice, but when they got to the lightning bolts on the front, I felt like they were too tired to do anything but paint those on. While aesthetically initially pleasing to the eye, looking at it too long cheapens the experience.

The crotch area is also a little weird to me. Like the legs are too far apart or something.  It makes the legs look awkward, like two random legs were just stuck on this body.  It could have honestly been better.

Don’t get me wrong, I love this figure, but the more you study it, the more you just want to point out the flaws instead of celebrate the strengths. It’s the first Black Lightning TV figure…I’m hoping with time comes improvement. Now is the time for DC Collectibles to jump in the arena with their own offering.  I can go ahead and hold my breath, it won’t be that long, right? 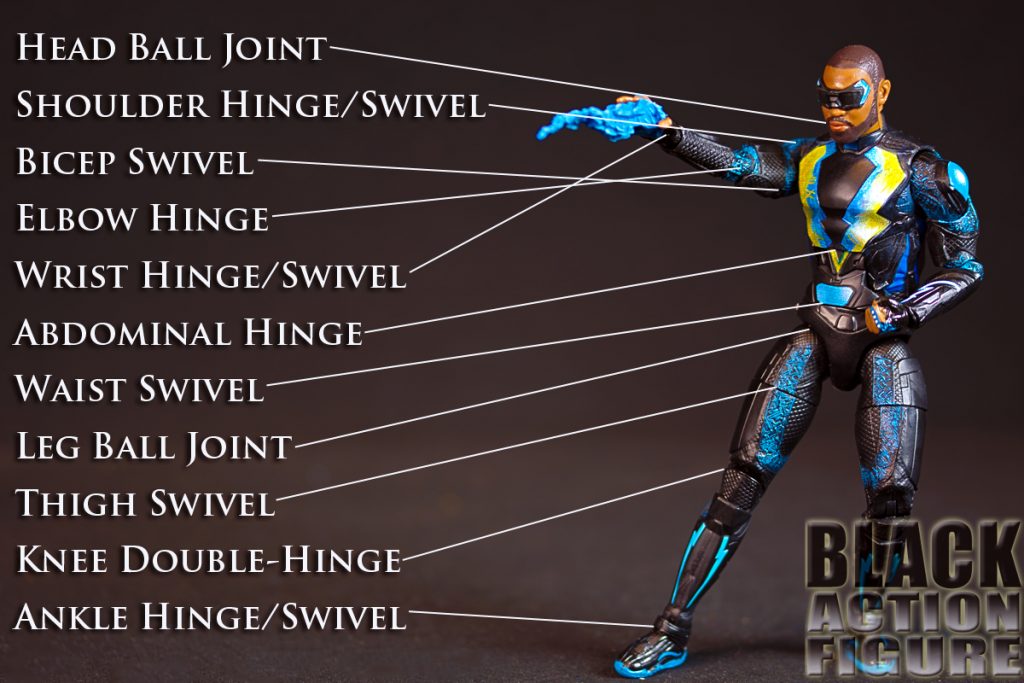 First off, this figure did a nice job with including a good amount of articulation at around 27 points.  The problem comes with…you guessed it…the costume hindering a lot of some of the critical articulated points.

The shoulders can’t go all the way back because the shoulder pad stops it. The hands bend forward great but not backward very well.  The head does not go back and forward to well (and without a hinge, it will never reach Marvel Legends standards).

All that and Mattel is still not using the double-hinged elbows on their figures. Just bending the arm at the elbow can be somewhat of a chore. I still feel like Mattel needs to get their toy engineers and go back to the drawing board (or computer drafting program or however that works) and re-design the core mechanics of some of their articulation. I know that sounds intense, but why let that be a losing factor when you’re making action figures? 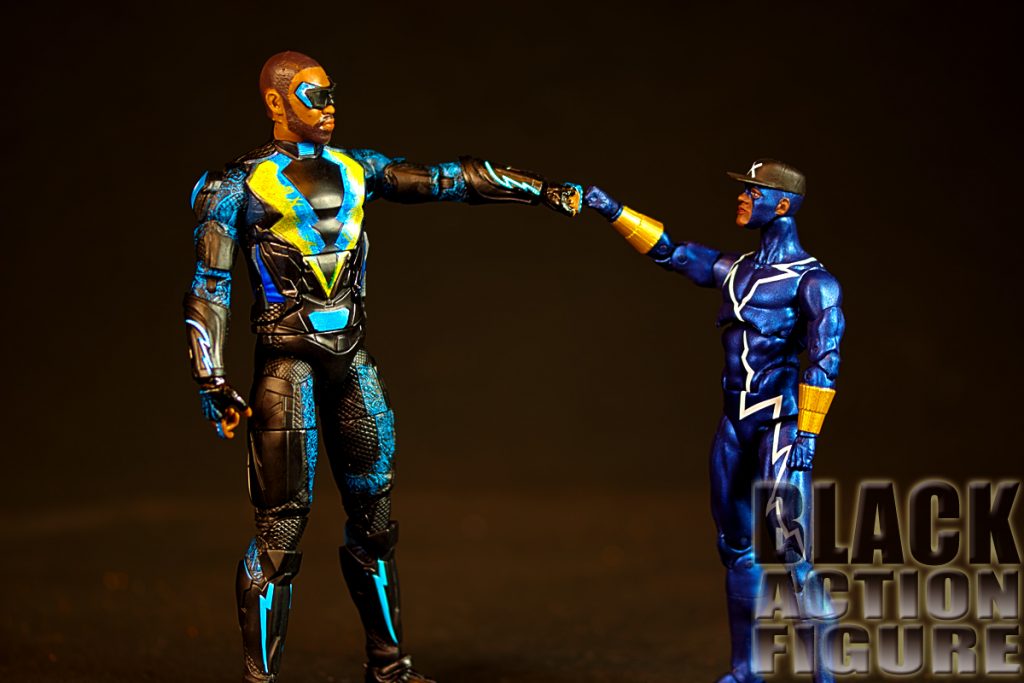 I’m not going to lie.  If you see this figure and you’re on the fence, get this figure. For one, you never know how much longer the TV show is going to be around so won’t you feel like a G when you have the one and only (so far) action figure to it?

Black Lightning is hot right now. Did y’all see this season of Young Justice? They (maybe just Batman) put him through the paces with him accidentally killing someone, then quitting the Justice League, then joining Nightwing’s covert team, then him seemingly finding love, then the two twists towards the end of the series…..phew, watch the show already! The season is over so it is worth paying $6 or whatever for a month of CBS All Access and watching it straight through.

Cress Williams is actually doing a great job playing Black Lightning. While the show is not perfect, it does hit a lot of enjoyable moments without feeling too preachy. There were wild rumors that at some point Static would join the show…wouldn’t that be interesting? Static joining and then start dating Jennifer/Lightning? I hate to use puns (why am I lying, I love puns!), but the sparks would definitely fly.