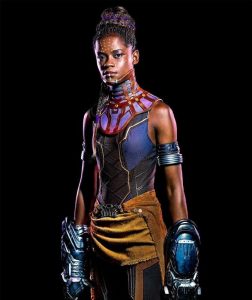 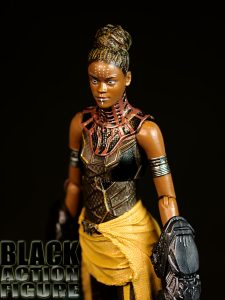 ABOUT DAMN TIME! We have been through two waves of admittedly awesome Black Panther Marvel Legends figures….okay, the first wave was half good with Hasbro not expecting the success of Black Panther and putting out a wave with a comic version of Iron Man, Namor, and Black Bolt, but the second wave of Black Panther figures was lit!  Somehow, out of all those waves, we still did not get the Marvel Legends Shuri figure that we deserved (instead having to settle for that basic ass $10 figure that made dollar store toys look good).

A year and a half after the landmark movie, with cameos in both “Avengers: Infinity War” and “Avengers: Endgame”, we finally get the Shuri we want. Was it worth the wait? Check out the review… 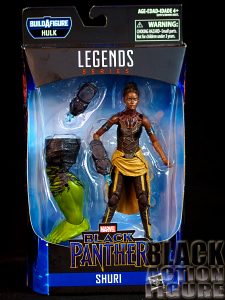 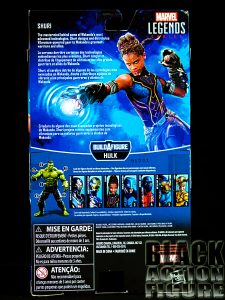 If it ain’t broke…we’ve been going through these packaging reviews for a minute and really nothing new.

I still don’t like that they replaced the working prototype with a picture of the character themselves. That is probably what drives me mad about this packaging.

Not only that, but if you look at the character art on the back, you can already tell that she does not match the color scheme of the figure inside. Almost a bit of false advertising.

Nevertheless, it gets my basic ML packaging score… 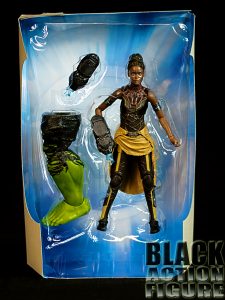 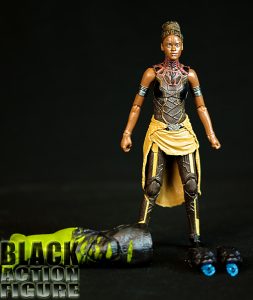 I always say I want to get accessories that make sense, and they did it with this character. Of course not counting the Smart Hulk Build-A-Figure piece inside, we get Shuri’s gauntlets of death. Which is funny because she is as smart if not smarter than Iron Man, yet all she seems to have in that final Endgame battle are these damn gauntlets. I mean, she really should have flown in there like a Wakandan War Machine with her own custom built suit of high tech armor, but nope.

The gauntlets are great, and like the cheaper figure, just snap on to the back of the figure’s hand.  I like these gauntlets because they are more movie accurate (the cheaper one must have been based on an earlier design) and they seem to have a more gradation in their paint scheme.

Unfortunately, a minus for the weapons is that even though the power blast is not as pronounced as her cheaper cousin, it still stays glued into place, instead of being removable. A removable power blast would have definitely signified a more premium space in the figure-speak. 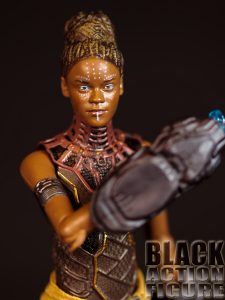 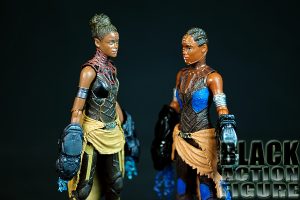 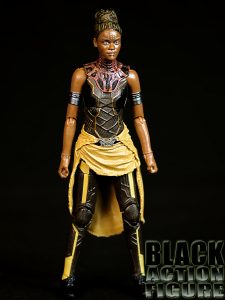 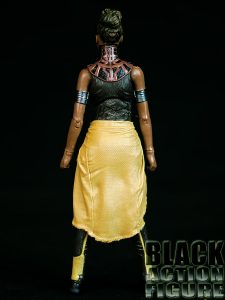 What more can I say? The more movie figures that Hasbro puts out, the better they get with this photo realism face sculpt process that I have been raving over the past few figures. This is the mini figure of Letitia Wright, and at this point Hasbro has put themselves at a disadvantageous position because now I’m always going to expect their figures to look as awesome as this one.

The sculpting on the outfit is absolutely gorgeous, of course.  Obviously very reminiscent of Okoye, Nakia and the Dora Milaje figures.

I do have an issue with the paint application. While this could very well be “another outfit” for Shuri, I right away noticed that this figure does not have purple detailing like the outfit she wears in Black Panther and Avengers: Endgame.  It seems they replaced all of the purple portions with black. Not saying it looks bad but it makes me think someone messed up along the way or they somehow just ran out of purple paint. So minus points on the likeness front.

Otherwise a perfect representation of the Shuri character and next to the upcoming Hot Toys Shuri figure, probably everything I want in the 6″ scale. 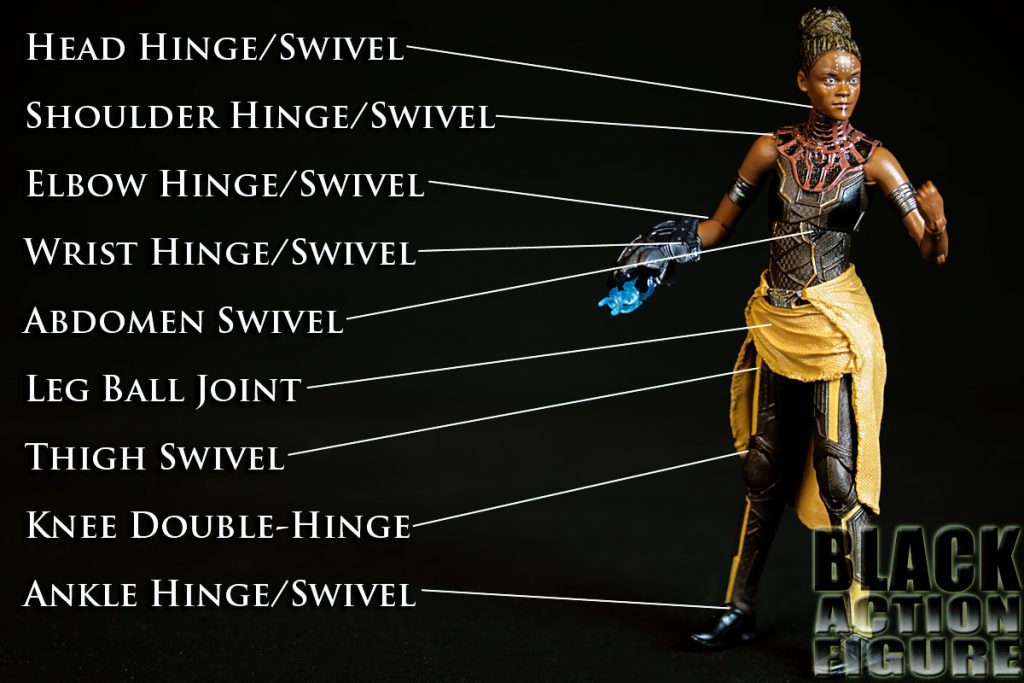 Similar to other recent female figures in this line (like Okoye, Nakia, and the Dora Milaje), this figure comes with over 27 points of articulation which of course is becoming standard for Marvel female figures.

Even though the articulation is there, the sculpting of some of the figure’s costume pieces prevent a lot of articulation. For example, the neck sculpting of the armor prevents a lot of the head motion from looking all the way or all the way down, a “feature” I have become accustomed to enjoying on Marvel Legends figures. Another example would be the plastic shawl around the figure’s waist blocking a lot of the leg movement.

I’ve mentioned in other reviews, but I also miss the double-hinged elbows that we see on the male figures. It’s sometimes nice for a figure to be able to fold their arm all the way back and Hasbro has done their best to simulate this, but just missing the mark.

All in all, a well articulated figure with a few roadblocks in achieving a perfect score. 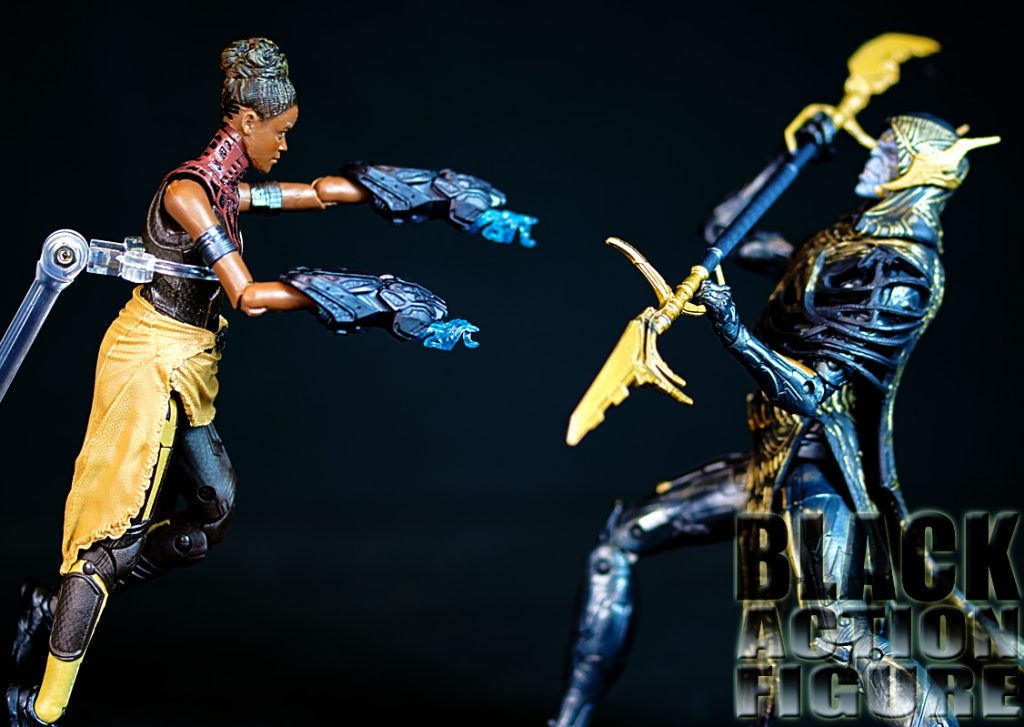 I can’t say it enough, I’m really happy to have this figure. My Wakandan display just didn’t seem complete without a good representation of Shuri (and back in the plastic bag for that God-awful $10 monstrosity). You ever get that birthday gift you wanted to like but it wasn’t quite right? Then you wait and get what you wanted in the first place?  It’s just like that…

What would make it even more perfect? An “auntie” Angela Bassett figure. Shoot, for that matter, please just let Angela Bassett come to my house…I promise to bow down to her…and whatever else she would want me to do. But I digress.

So we’re getting all these clues that Namor may be the next “villain” (or villain who turns hero after the real villain is revealed) of the next Black Panther movie. We’re getting all the clues: comic-based Namor included in the first wave, an “earthquake” happening off the coast of Wakanda in “Endgame” around the area Namor may be…I think it’s inevitable.  Let’s just hope when Hasbro comes around to make the figures, they remember not to shirk their cash cow again.