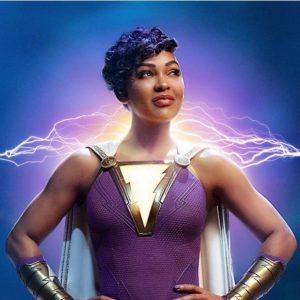 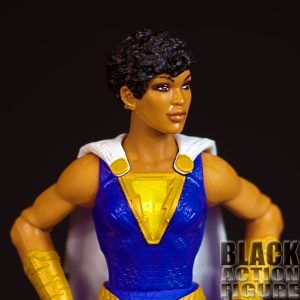 It was a rough time in my life…since I lost my MoviePass late last year, I had to carefully pick and choose which movies I would go to (I know, rough time). As much as I wanted to, Shazam did not make that list…I wanted to save my money for “Avengers: Endgame”…and of course I had NO regrets.

Sometime between then and now, someone had messaged me that Amazon had the Darla figure from Shazam available. At the time, I had no clue what I was ordering because I had not seen the movie and did not know much about this character, but it was $10 so worth a look at.  When I received the figure and took it out, I thought to myself “huh, this kind of looks like Meagan Good.” I had no clue that Meagan Good was even in this movie, but this $10 Mattel figure had intrigued me right away.

We all know how Hasbro treats their “$10” figures (I’m looking at you fugly Shuri) but does Mattel treat them with the same respect?  Check out the review… 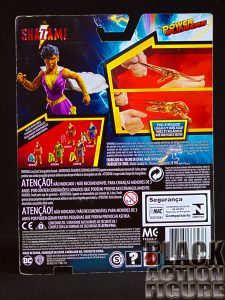 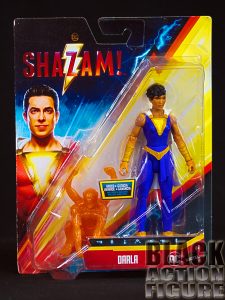 The basic Mattel Shazam figures, like Hasbro “basic” figures, comes in cheaper packaging with just a bubble window with a card back, reminiscent of action figures back in the day. I’m sure the simple packaging comes at a lighter price point than current Mattel DC Multiverse packaging which is geared more for collectors, so for the basic figures, we take what we can get.

The card front is okay, but of course generic picture of Zachary Levi’s Shazam graces the front instead of Meagan Good’s Darla character…which is to be expected. All of the basic figures come with nearly the same card art.

The back is also well designed showing off “features” (using that term loosely) of the accessory and the other 5 figures in the line. Selling these as basic figures was smart considering people were most likely unwilling to shell out $20 for a more premium figure.

I do notice a discrepancy which will be mentioned more in the “Sculpt/Likeness” section – on the back of the card the figure is shown with a purple costume with a more reddish tone, like her costume on the film. The actual figures purple hue is more blueish than reddish. It was almost like Mattel told the manufacturer “Just do a purple, any purple” and that’s what we got instead of a more movie accurate color. 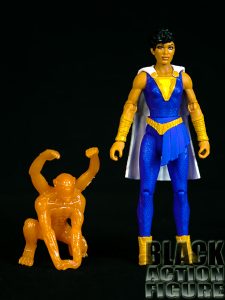 This figure came with one accessory, and kind of a lame one at that. Each of the basic Shazam figures comes with a rubber representation of the seven deadly sins. This is definitely a throwaway accessory since it is loosely based on the movie and it is not even to scale with the figure itself.

The “action feature” of the accessory is to pull it back and let it fling like a rubber band. Please stop it Mattel, you really could have done better than this.

My idea for an accessory? Not so much as an accessory, but maybe have done a basic Build-A-Figure (sorry this is Mattel…Collect-N-Connect) of the Djimon Honsou wizard character. Lord knows we weren’t getting one with the other movie that ran at the same time – Captain Marvel. Didn’t even realize until writing this that Djimon Honsou was in both movies nearly at the same time. Huh…Hollywood.

No other accessory to speak of.  Another idea would have been maybe their children counterparts, but that would have been too much for Mattel for what was possibly considered a mediocre movie (although I enjoyed it…on digital when it came out) 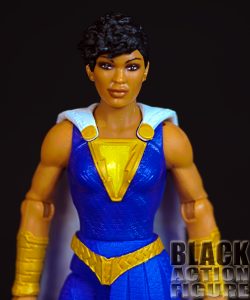 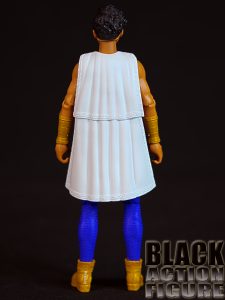 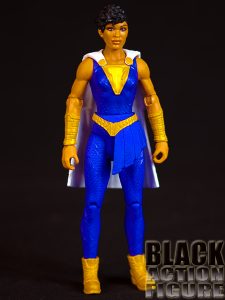 This is what had me thrown off. This is a $10 figure…in theory, this had no business looking so much like Meagan Good but it does. For a $10 figure, Mattel nailed the likeness on the sculpt.

I thought it was kind of a fluke, but I looked at all of the $10 character figures in this line and they all have a pretty good likeness to the actor that portrays them. I don’t know what process Mattel is using nowadays, but it nearly matches what Hasbro has been doing lately. And Hasbro has only been using that process on their Marvel Legends figures, and not their $10 throwaways.

I showed this picture to my mom today who I know has not seen the movie and asked if she recognized the actress.  Within five seconds, she was able to identify the action figure as looking like Meagan Good. That’s when it was confirmed for me that this was a good sculpt.

The sculpting for the rest of the body was not bad although I do have a personal problem with the figure arms. They are slightly too big for the body, and definitely too big for a Meagan Good portrayal. I can see Hasbro may have reused these arms from another figure rather than they be original, but of course that is my guess.

As I mentioned before, the color scheme of the paint application is off. This figure turned out to be a more bluish purple while the movie character is wearing a more reddish purple costume. There may be people out there who are all like “who gives a shit” but to me it makes a difference. 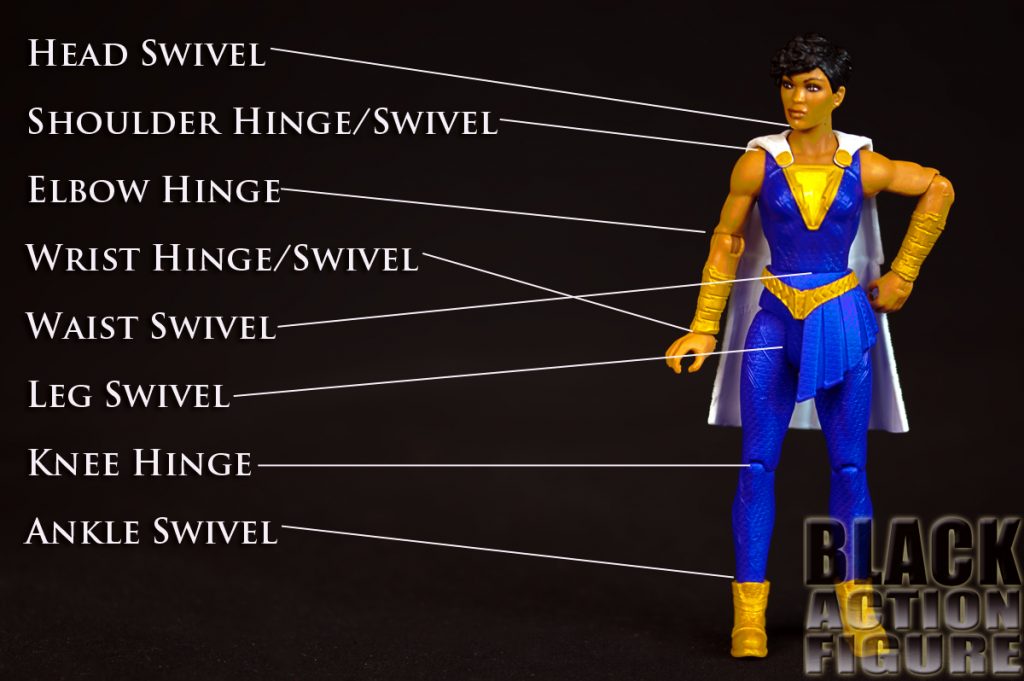 The articulated legs have nothing to write home about, but the arms are well articulated with 6 articulated points in each arm (I accidentally missed an Elbow Swivel in the picture above).

The swivel at the waist seems simple, but most don’t take the time to put one in, especially for their less expensive figures. 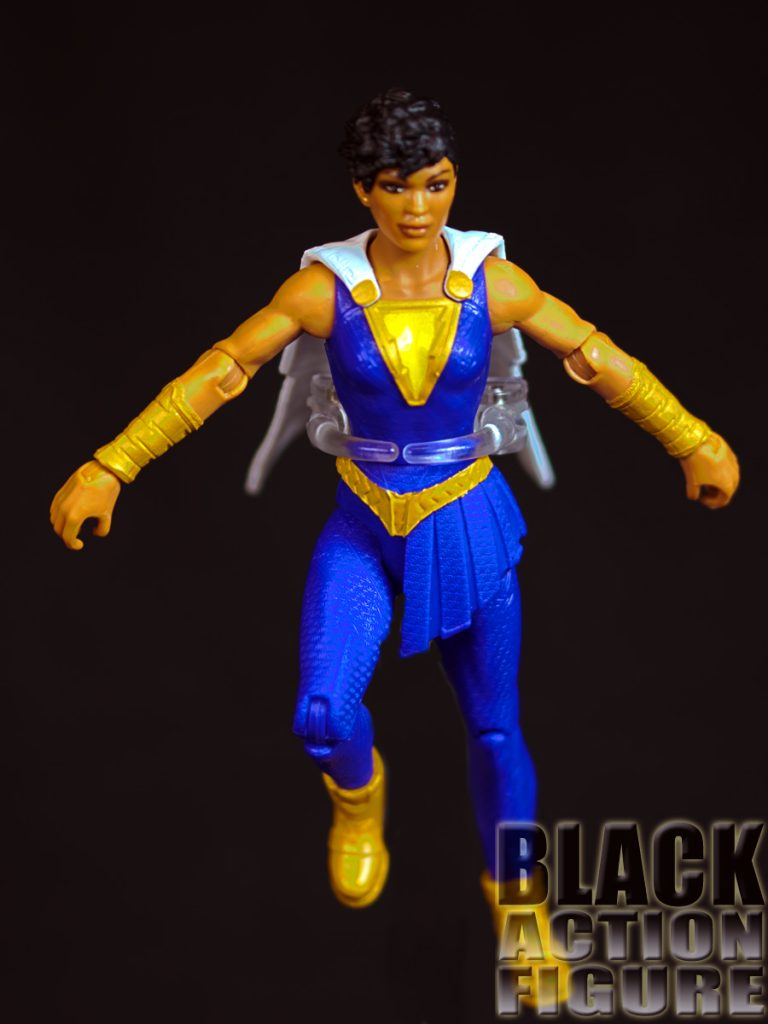 While I’m thinking about it, I just want to mention that I was worried about the quality of the plastic used for the figure. In many cases the cheaper figure usually gets the cheaper plastic. But again, Mattel surprises me by using a material that’s not bad.

Due to the minor popularity of this figure, the price has been steadily rising.  I originally bought it for $10 from Amazon.  Amazon now has this figure listed for around $14-$15.

Interestingly enough, I found this figure again at Five Below two weeks ago when shopping with my daughters. At $5, I couldn’t resist picking up an extra. I only wish I had picked up the other two that were on the peg. I went back today and they were understandably gone.  We have two other Five Below stores in the area…but I’m not going to go out of my way to see if they have it. I’ll pick it up again if I see it again, which may be doubtful.

The headsculpt on this figure is really good and I would really like to know the process that Mattel is using for this line (and any other line). If anyone knows, hit me up in the comments below.

The final score may not necessarily reflect it because of low scores on packaging and accessories, but I absolutely think collectors need to pick this one up. For one thing, this is the only Meagan Good action figure that comes to mind.

Pick one up when you get a chance…