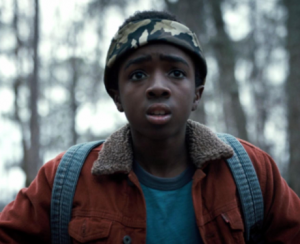 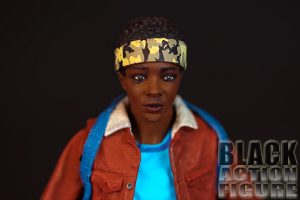 You can tell when I’m just kind of “meh” about a review.  I did this photo shoot of this figure two weeks ago…and I’ve been sitting on it since. But here it is and I would like to get this one done before the third season comes out next week, so I’m still somewhat timely with this review.

Some background on this figure – I really had no intentions of purchasing this figure…at least not at full price.  I like the character enough, it was just that every time I saw it in the store or online, it didn’t grab me to make a purchase.  Finally at Best Buy one night, I passed by it and what looked like a package that had been tossed and kicked across the store was staring back at me…for the price of $4. Couldn’t pass it up and now I get to review it before the next season starts (and in true Netflix fashion, also ends since we get all of the episodes released at once) so let’s check out the review. 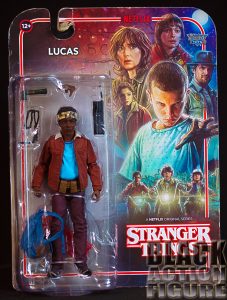 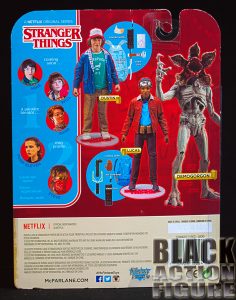 In true “80’s” fashion, this action figure comes in a blister bubble with a card back.  To add to the nostalgia, Best Buy even put a plastic tab over the hook because the packaging was so beat up that the hook could no longer support the weight of the figure on a peg. It reminded me of all of the GI Joe and Star Wars figures I used to find sprawled out on the shelf because the peg hooks were beat to shit.

Other than that, McFarlane Toys took the time to “retro-ize” the packaging, including the look and feel of “Stranger Things” on the front and the somewhat chaotic layout on the back. I just love the characters in the circle frame. Real classy.

Nothing really special about the rest of the packaging. Nostalgic, but kind of boring. 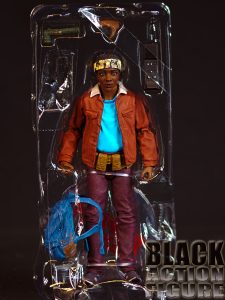 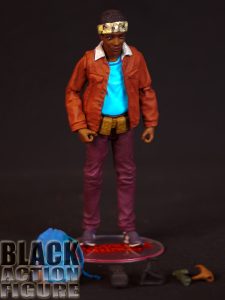 I have to say, for my $4 purchase, this figure comes with some decent accessories.

This figure comes with a backpack (solid plastic, not usable), a walkie-talkie, a slingshot, a flashlight, and an additional right hand to be able to hold the appropriate accessory.

Oh, and we also get a figure stand with the “Stranger Things” logo emblazoned on the clear plastic.  Remember those Hasbro and Mattel? FIGURE STAND. Such a simple thing brings so much pleasure to me. And it doesn’t have to be complicated. Just a shape with some pegs sticking out. Simplicity.

Although the accessories are pretty cool, they are actually kind of hard to place into any of the hands. The slingshot just absolutely did not look right.  The flashlight and walkie-talkie fared a little better, but the stiffness of the figure and the plastic used just made things awkward. Some of the accessories were cast in a softer plastic than the figure, Working with it at all tended to be problematic. 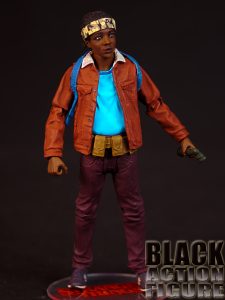 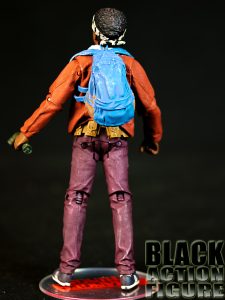 I used to be in the camp that McFarlane Toys had great likenesses.  That was until I got into Hot Toys and other 1/6 scale figures. I still had some love for McFarlane Toys but lately, Hasbro’s new process has them beat.

Now I have to say, I thought it was only these Stranger Things figures…until I picked up and subsequently put back down their Game of Thrones figures. The ones where Daenerys looks like an extra from “The Dark Crystal.” It seems like they are missing the mark all around.

Again, they seem to have gotten the technical aspects, but failed miserably to put them together in a figure that resembles the actor. For one thing, they used the wrong brown to represent his skin, a cardinal “action figure” sin that I used to chastise Hasbro a lot for until they corrected it.

The clothing and accessories seem to be spot on, even with the color (heh, purple pants). The camouflage headband seems to be a different color and design, but that may be nitpicking a little.

It’s really the face that counts…and this figure does not look like Lucas from the show. To borrow a line from another one of my reviews, it looks like some kid cosplaying as Lucas, instead of the actual person himself. 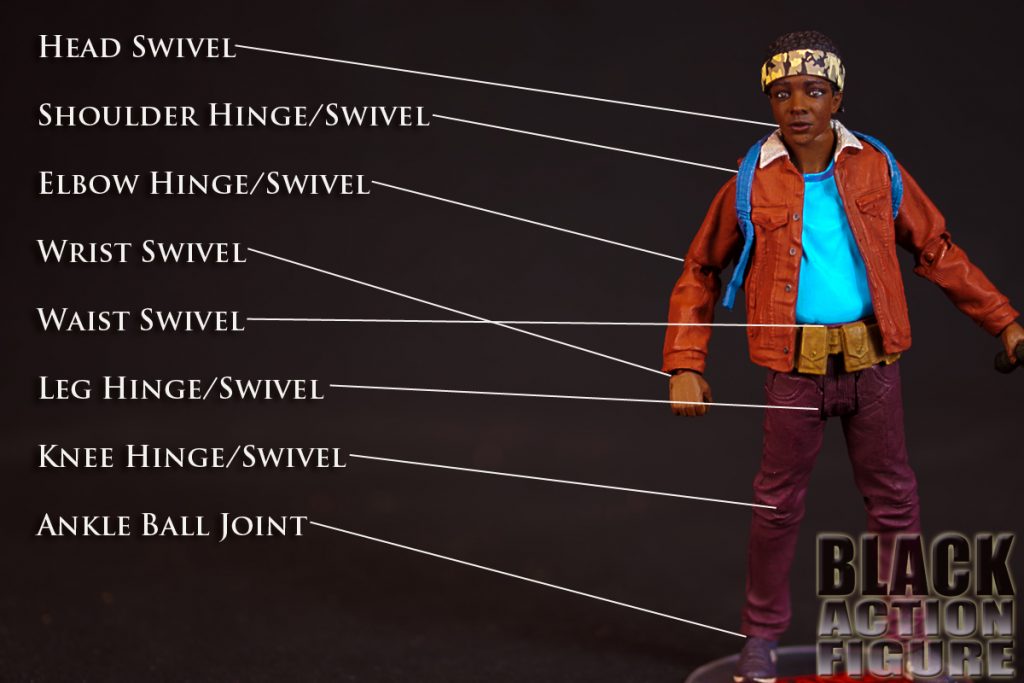 It’s hard to say that 22+ points of articulation is low for any action figure, but when you count in full range of motion, I can absolutely say that it applies to this figure.  While the articulation is there, the heavier, stiff plastic makes it seem like it’s hard to pull of poses. In the case of most McFarlane figures, you are left with a slightly articulated statue.

Unfortunately, it’s been this way for years.  I remember getting the Shaft figure close to 15+ years ago…and it was the same thing. It theoretically had articulation, but the stiffness and heavier plastic made for some hard poses.  I really hope this style changes before McFarlane Toys takes over the DC franchise. 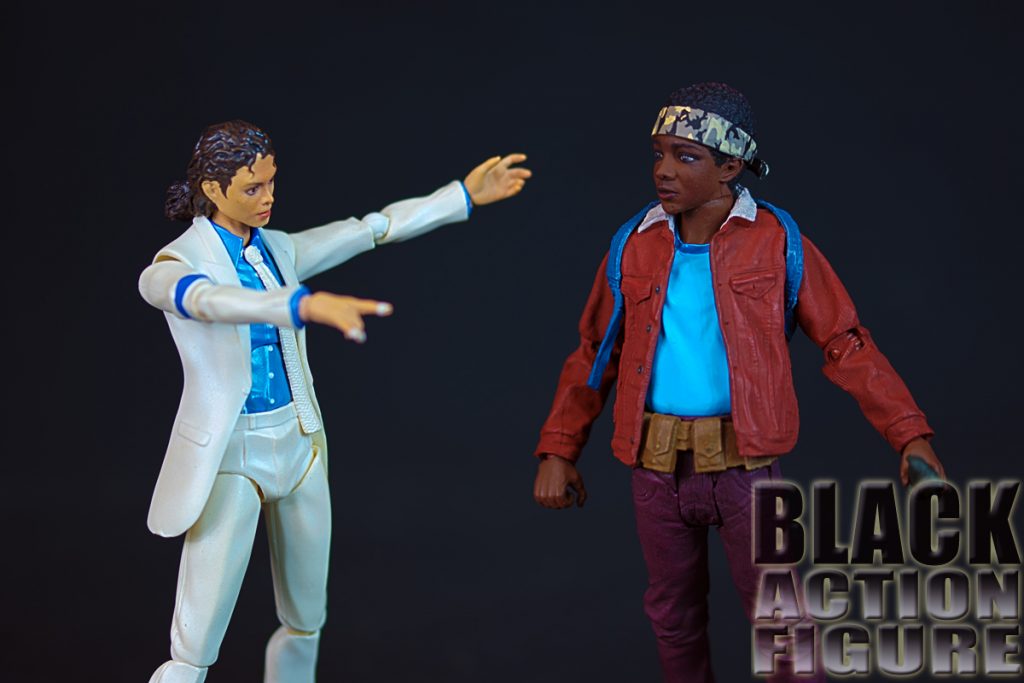 Is this a bad figure?  Not really.  My excitement at finding it at such a discounted price was over after I took the time to open it up and take pictures…thus the real reason it took 2 weeks to get this review up and out of here.

I am excited about the new season of Stranger Things though. I saw that they added a new Black character so would love to see how that works out.

I also wonder if this figure was in any other scale would I purchase it?  I believe Funko already did a 3.75″ version.  Would I go for the 1/6 scale treatment?  I don’t know…it would have to be slightly less expensive than other licensed figures.

Anyway, I thought you would love to see Lucas here pictured with another 80’s icon…oh wait, it’s Michael….RUN, LUCAS, RUN!