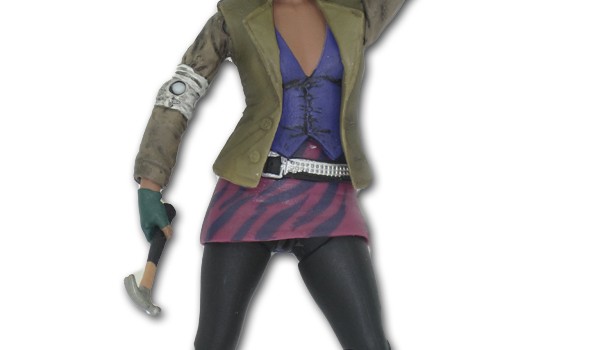 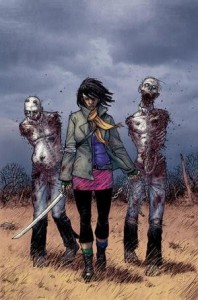 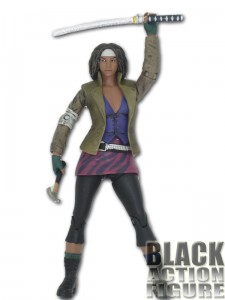 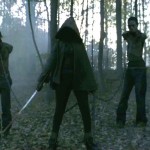 There was a surprise cameo in last week’s season finale of The Walking Dead.  This cameo excited the readers of The Walking Dead comic book (like myself) and confused those who have only been exposed to the series through AMC’s critically-acclaimed weekly hour-long television series.  For those who did not know (or have not Google’d it by now) our mysterious cameo was none other than Fan-Favorite, Michonne.  Her introduction, as a sword-wielding, armless zombie-toting, badass chick mirrored her introduction in the comic in Issue #19 of The Walking Dead (seen above).

Not much is known about Michonne in the comic book, and even less is known about her in her brief introduction in the tv series.  In the comic book, Michonne was a lawyer before the zombie apocalypse took over the world.  In order to avoid using a gun (which only alerts the zombies to her location), Michonne taught herself to use a sword, and with more than enough zombies out there, she has had plenty of practice.  In the art of stealth, she also carries a variety of weapons on her including a hammer and a drill, against the armies of the undead.  So does the action figure measure up to this comic book legend? 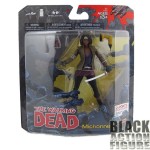 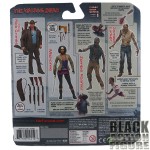 Packaging
For a 5″ figure, the first thing I noticed about the packaging is how excessive it is.  The action figure itself comes in a pretty sizeable bubble and back card.  But the designers used the size and have illustrations of zombies reaching out to grab Michonne.  Great idea, but I still felt a good portion of the money used to purchase the figure went into the packaging.  Case in point, I just recently went to Walmart and found The Walking Dead action figures in smaller packaging and selling for at least $3 less (than Toys R Us or online).  While this correlation could be the fact that it is Walmart, mega-superstore, I believe the smaller packaging allowed them to give their customers some cost savings.

The front has a couple of interesting pieces of information.  For one, this figure is intended for Ages 13+, most likely because of the subject matter.  I honestly can’t say that I know of any 12 and unders who are reading this adult comic book, but I could be wrong, so they are definitely shooting for a certain demographic.  The package also points out that this figure has “21 points of articulation”.  Again, a feature more for collectors than kids.  We’ll count the number of POA’s in the next section.
Score:  8.0/10  (Awesome packaging, but excessively too big)

Accessories
Michonne comes with an assortment of great accessories and weapons against her enemies including her iconic sword, a hammer, a drill, pliers, a spoon….wait, a spoon?  What could she do against her enemies with a spoon?  And by the way, did you catch that I used the word “enemies” instead of just zombies?  Could I be implying that she not only uses these weapons against zombies, but against humans as well?  Only time will tell.  Watch the show.  Better yet, read the comic book.  I promise it will be one of the best reads of your life.  For a couple of years there, it was like comic book crack and Robert Kirkman (creator) couldn’t put enough of these things out.  And we continue to want more…but I digress.  The only reason this action figure is not getting the highest score is because her partner in crime, Rick, comes with accessories galore including a semi-automatic pistol, three shotguns, a rifle, a hatchet, and a carrying case.  Now that would be a 10 out of 10…so poor Michonne with her sword and spoon only gets a 9.
Score:  9.0/10  (Great accessories, wish she came with more!) 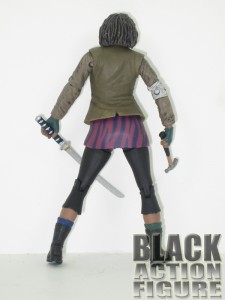 Sculpt/Likeness
This is a McFarlane Toys release, which is pretty much means dead on likeness.  I recently went through some action figures I purchased over 10 years ago that were made by McFarlane Toys and I was thought to myself how accurate they were and how they made the figure look exactly like they did in the comic book.  Michonne is no exception.  From her sword, to her hot pink skirt with leggings and hiking boots, this action figure looks exactly like she does on the front of The Walking Dead #19 (seen above).  There is one thing missing though.  On the picture above we see a yellow scarf, but no scarf is present on her.  Could this be an oversight or the sculptors did not feel the need to include a scarf.  Negative points for the obvious oversight.

The head sculpt is a little off as well.  Michonne should have curly, wavy hair, but it did not seem they were able to get that look through on the figure very well.  There’s also the issue of her eyes.  They are constantly gazing to her right so this figure will be unable to look face forward at you.  Weird choice and another knockdown of points for that.  Otherwise an excellent reproduction.
Score: 8.5/10 (Great sculpt, subtracted points for hair and eyes) 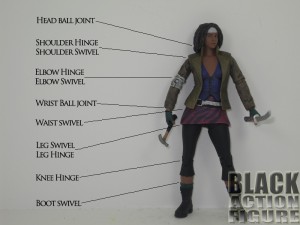 Articulation
One of the things that I like about McFarlane Toys is their ability to evolve their action figures over time.  Thirteen years ago, their figures were works of art, but they had little action to them with anywhere from 5 – 8 points of articulation. 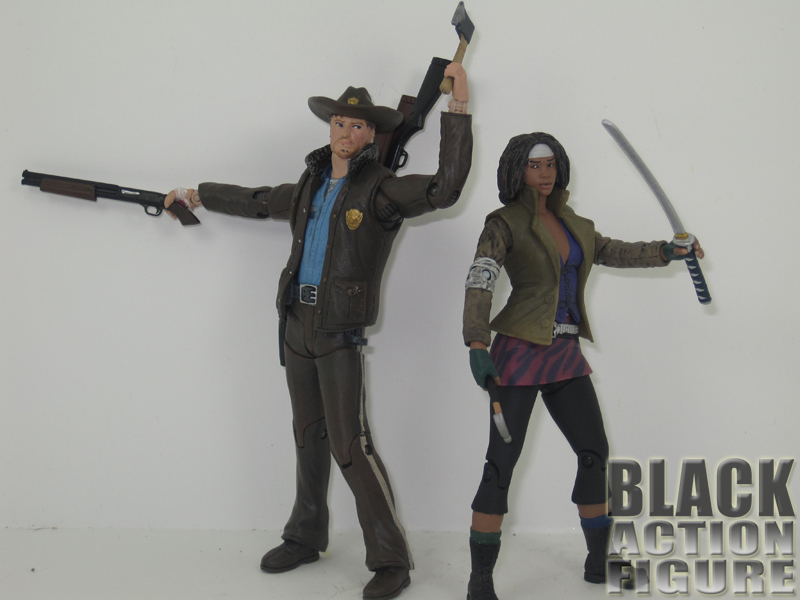 Not much more to say that the review has not already said itself.  I really like this figure.  So a great action figure for one of my favorite characters from one of my favorite comic books.  This could have easily gone the other way if McFarlane Toys did not step up to the plate and create an awesome figure.  I hope if they continue with the line that they produce an as great or better Michonne TV action figure. 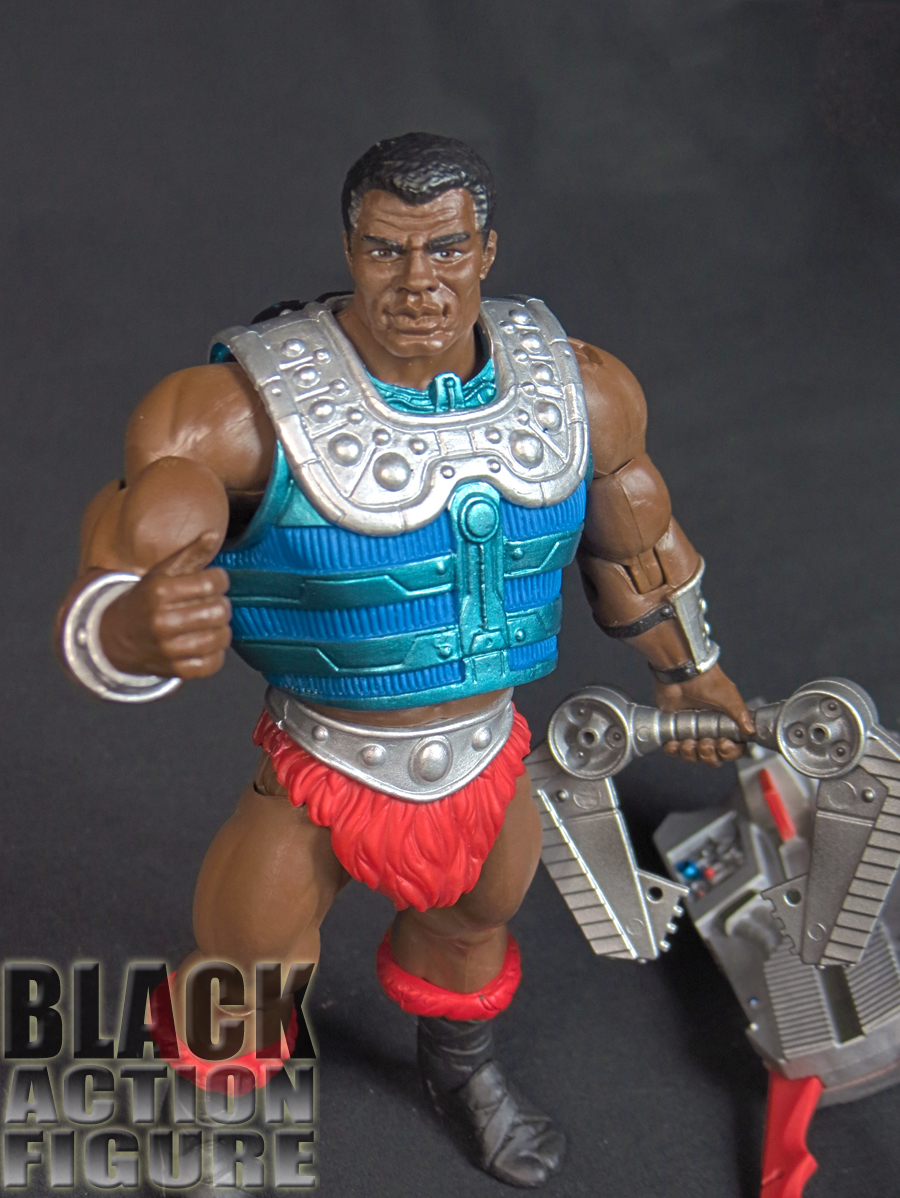