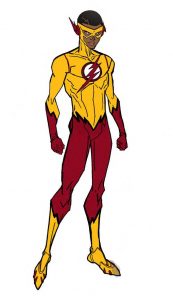 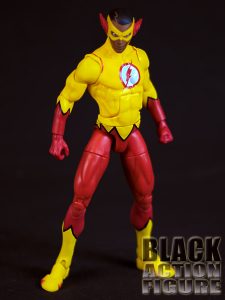 Let me tell you, it’s kind of hard getting off the Marvel bandwagon…Hasbro alone has been producing excellent action figures and their distribution has only made them more popular. But over the years, Mattel has been hanging in there pushing out smaller waves of figures based on DC TV, movie, or comic book franchises.

Unfortunately (or fortunately, depending on your opinion), that’s soon to change…it has been announced that McFarlane Toys has been given the DC license to produce 6″ – 12″ highly articulated figures.  Mattel, in their last push, has seemed to want to up their game with more articulation and better sculpts, but apparently it’s too little, too late. The numbers aren’t in their favor…for every figure they make, Hasbro puts out between 15-20 figures, and for every Black figure they make, the numbers are nearly 5:1.

So now we’re at the endg….errrr…the final waves of their DC dominance…so let’s review them while we still get them.  Next up is the comic book version of the new Kid Flash… 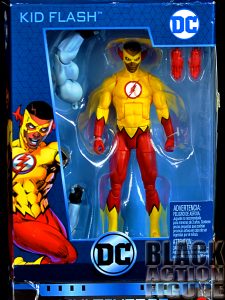 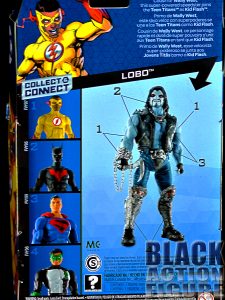 Packaging is great, but I really want to take this time to talk about a couple of other related topics: distribution and their Collect-&-Connect availability.

First off, distribution…this wave is nearly impossible to find.  If you did not pre-order it on some online retailer, you will either have to wait until it becomes available on Amazon (which as of me writing this, it is: DC Comics Multiverse Kid Flash Action Figure, 6″

) or you will have to brave the markup of the eBay scalper. It may be different at your town, but I have barely seen any newer Mattel DC Multiverse figures in stores…except for Aquaman figures and Shazam. Which is a shame, because this wave of 4 figures is pretty bad-ass.

Secondly, the Collect-&-Connect figure. Like Hasbro’s Build-A-Figure, but even harder to complete. If the distribution won’t get you, then figure popularity will screw you. While it will only take the purchase of four figures in this wave to build Lobo, getting popular figures like Batman Beyond without having to pay a premium will be hard met. With persistence, I was able to get all four figures at retail pricing. But it wasn’t easy.

All of which I mentioned won’t determine the packaging score, but these were some of the related things that bothered me and I had to get it out. It’s no wonder that Mattel is failing at this game. Maybe their dependency on Barbie and Hot Wheels will keep them relevant…this surely hasn’t worked. 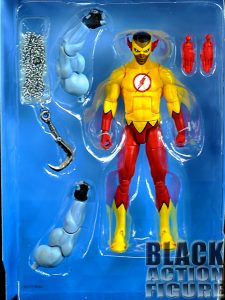 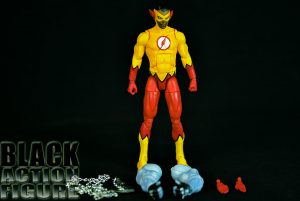 In terms of accessories, you don’t get much with this figure. The figure itself only comes with an extra set of hands. Why is that? The rest of the plastic allotment has gone to the Collect-&-Connect figure…Lobo’s arms and a metal chain weapon.

My main complaint? How can we have people with superpowers if we can’t have super-powered effects to go along with them.  They included green energy with the Green Lantern figure. They could have included lightning effects, or maybe a dust cloud to simulate speed…almost anything.  Instead we get nothing. (we could always use an unmasked head sculpt too…)

I hope when McFarlane gets the license, we’ll see some changes in how they handle accessories with these figures. Something new to invigorate collecting is what is needed in this industry. It’s why collectors gravitate towards Japanese and Chinese figures even at a higher price tag…is because they cater to the collector. I hope whoever has the license to do so as well. 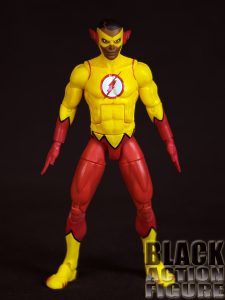 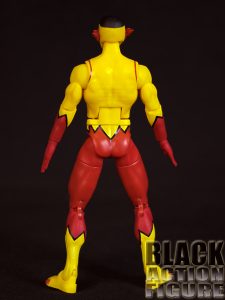 As I mentioned before, Mattel is honestly kind of coming into their own with these figures. It’s bad enough that they have to chase after Hasbro to stay relevant. But I’m glad that their figures are starting to get on par.

The good: the paint application is great and on point, looking like the character from the comic book. The colors are bright and accurate, and I even like the tone of brown used for Kid Flash’s skin (yes, that is apparently a thing I look for now…). I wish the Flash logo on his chest could have been slightly bigger and more stylistic. but it is okay.

The bad: Mattel has always had an issue of using adult bodies for teenage characters. Hasbro used to do it too, but got a clue and starting making smaller bucks for their teenage and smaller characters.  Mattel has yet to do the same (if they ever will).

Kid Flash is overly muscular when he should be appropriately skinny and maybe even a tad shorter. This dude here looks like he can bench press a car.

Thank you Mattel for the figure, but would have loved if it was in an appropriate proportion to the actual character. 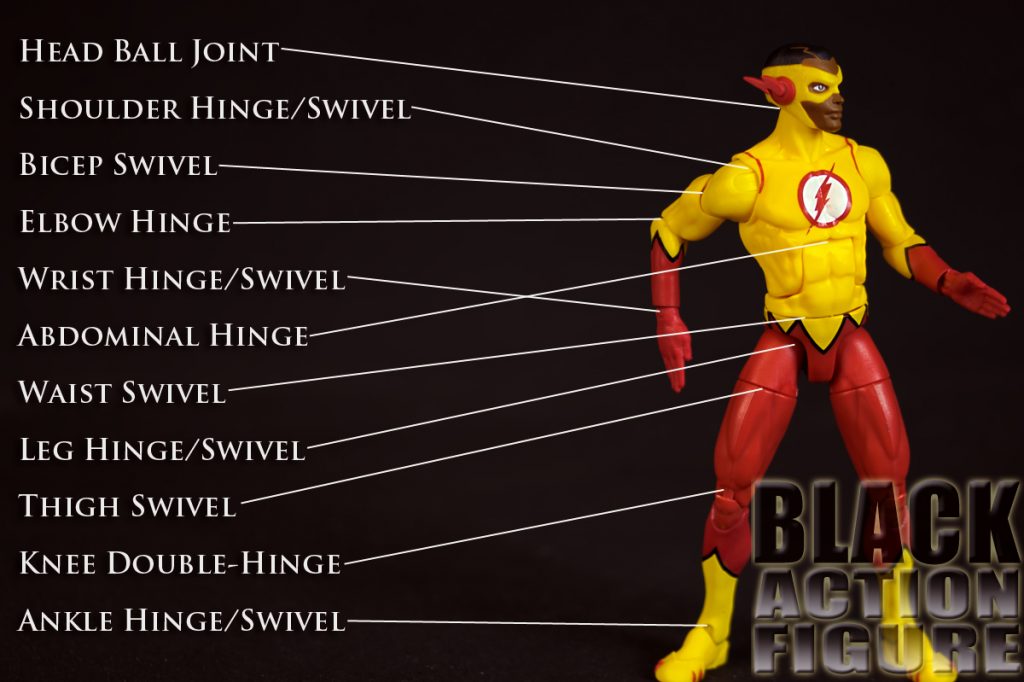 I always like a figure until it comes down to articulation. Articulation is important because you don’t just want a figure, you want to pose it in a character-appropriate pose. Which is why more companies try to do it right the first time.

This figure has roughly 29+ points of articulation. Sounds great right? It is mostly great.

The pluses include double-hinged knees which is starting to be a standard. I also like the abdominal hinge and the waist articulation, again things that should be standard.

The minuses include not including double-hinged elbows, so arms only bend so much.  And then the head articulation. HASBRO got it right! Put a freaking hing in the neck so that the figure has motion to look up or down, a plus in many action poses.  Flyers and speedsters (in this case, Kid Flash for the latter), need the ability to angle the head and neck upwards. Otherwise, they look more and more like stiff manequins and less and less like the character. 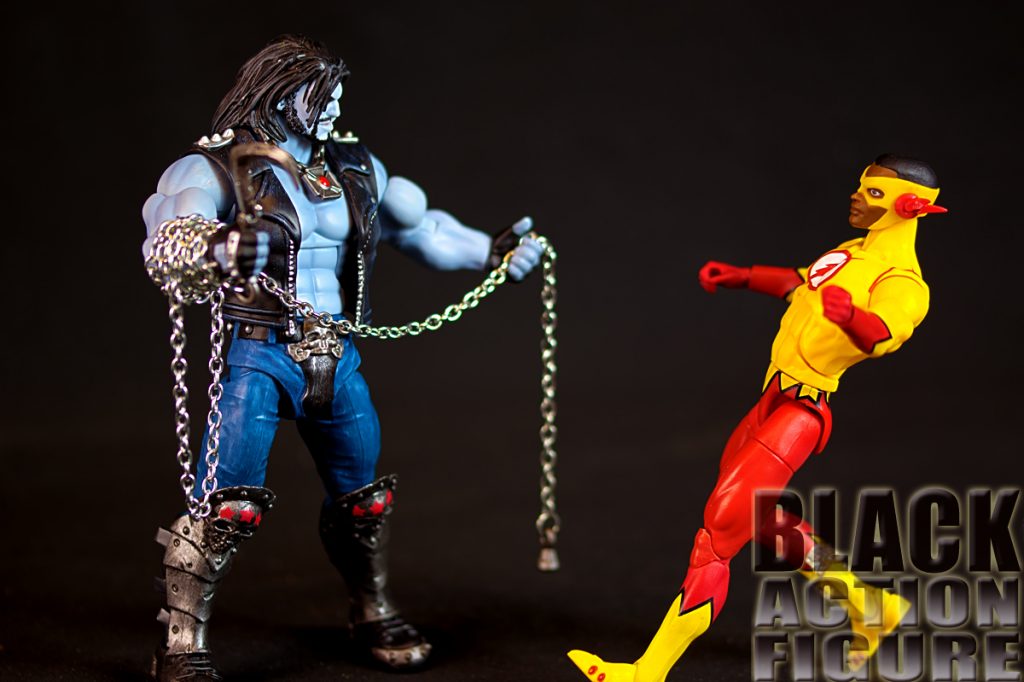 I’m gonna tell yall a secret…I really bought this figure (and the other 3 figures) for the Lobo Collect-&-Connect. I don’t think in my years of collecting I ever purchased a Lobo figure. And this one was done pretty okay.

But let’s talk about the big ass elephant in the room…making Kid Flash/Wallace West Black.  Yes, they did it in the Flash TV show and then made it mainstream in the comic book.  Then they named him Wally West.  But no, he’s not the same Wally West because that one was lost in time and space and came back just recently.  This is his Black cousin, also named Wally West. Ugh.

I’m not against having a Black speedster in the DCU, but my six-year-old could have written a better back story. When Jason Todd died at the hands of the Joker, his Black half-brother, also mysteriously named Jason Todd, did not replace him as the new Robin. I think that’s why readership is down now. Comic book companies don’t respect our intelligence.

At any rate, we did get a good-enough figure out of it, so I’ll enjoy that.  Take it as you will.