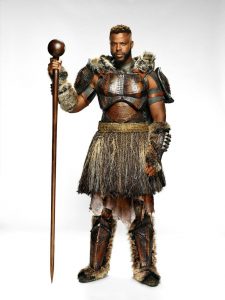 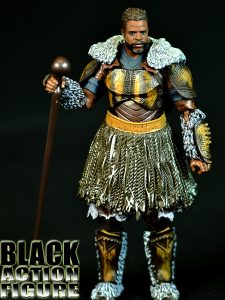 We finally come to the end of a fantastic Marvel Legends wave of figures from 2018’s Black Panther movie. We end this wave with another figure that I thought for awhile that we may have to live without: M’Baku, leader of the Jabari Tribe.

M’Baku, portrayed by actor Winston Duke, was a surprise breakout character in the movie. He was setup early in the movie to be easily disliked, challenging our hero Black Panther for the throne, but nearly instantly and just as easily redeemed as he not only saved T’Challa from dying, but also saved the rest of Wakanda from Killmonger’s forces.  He later went on to fight alongside the Avengers against Thanos in both “Avengers: Infinity War” and “Avengers: Endgame.”

When I first saw the prototype for this figure, I was on the fence. I was happy to have an M’Baku figure (no chance for W’Kabi then…) but at the time I didn’t think it really looked like Winston Duke. Did the actual in-hand Build-A-Figure meet or exceed my expectations? Let’s check out the review… 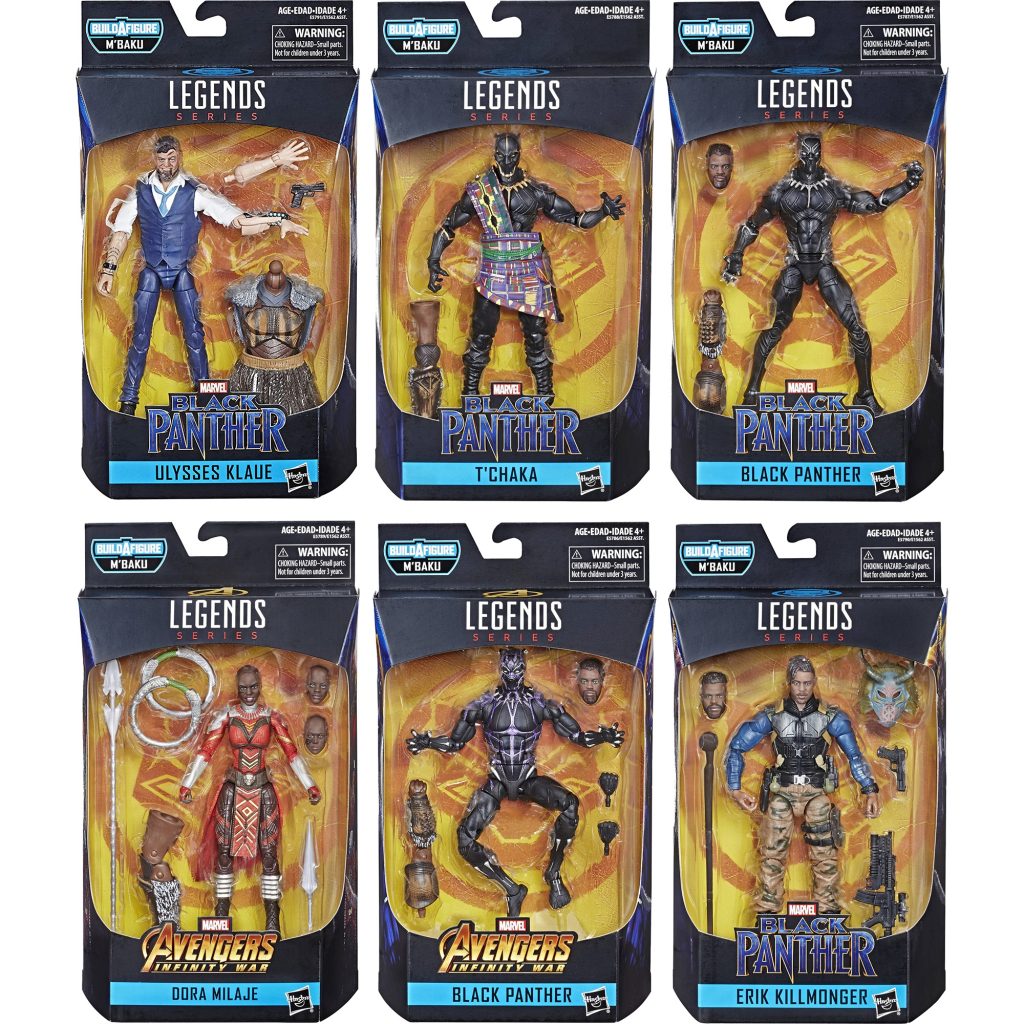 Since M’Baku was the Build-A-Figure for this wave, you actually had to purchase all six figures in this wave (Klaue, T’Chaka, Black Panthers 1 & 2, Dora Milaje, and Killmonger) to be able to put this figure together.  As you have probably read the other five reviews before this one, each figure is more than worth a purchase, so putting M’Baku together was relatively painless making an easy purchase of six figures into a total of seven altogether.

With that in mind, M’Baku actually came in six different packages, all of which really received the same score, so he will also receive the same score. 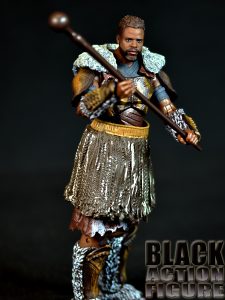 This figure comes with what I call 1.5 accessories. I will get to the “.5” in a second.

The most obvious accessory is M’Baku’s staff. For a simple staff, it is really done well in my opinion.  It is cast in a brown plastic that comes close to looking like the polished wood of his actual staff.  It fits well in the figure’s hands – in either one hand or both. I think he’s ready to swing this staff around and knock the enemy out.

The “.5” accessory refers to his removable gorilla fur cloak.  I don’t normally count “clothing” as an accessory unless taking off said clothing can be an added plus to the figure, and in this case it can. Yes, M’Baku looks regal and king-like in his cloak, but without it, he looks ready for battle.

Of course, the determination of “accessories” in in the eye of the collector, so take it as you will. I really can’t think of any other fitting accessory, so I am happy with what was included. It’s not an arsenal like was included with the Dora Milaje, but then again, it really didn’t need to be. 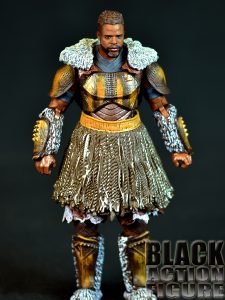 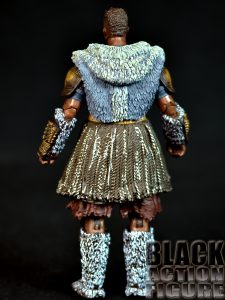 Now we get to the likeness.  Let me get to the head sculpt first because that was what I was most worried about. Needless to say, the head sculpt is on point. Whatever this new process that Hasbro is now employing with their movie figures, it works and works well.  I can’t look at this figure and not see Winston Duke in every angle I look at it.

The front facing view of the head sculpt is nearly spot on.  The profile/side shot is also spot on. I’ve actually seen Winston Duke more than I have Chadwick Boseman having watched him on shows such as “Person of Interest” and “Modern Family,” so it just seems that I can recognize the actor even from the side shot, and Hasbro has it down.

Looking on to the rest of the outfit, it’s almost unbelievable that Hasbro took the time to get this as screen accurate as they have. Everything from the armor to the gorilla fur to the battle wrap (not a skirt) is nearly exact to the actual character.

Paint application is also equally impressive. The colors blend in well. The fur looks like it was skinned off an actual white gorilla. The armor almost has a bamboo like look to it. This is probably one of the best Build-A-Figures Hasbro has ever done, if not the best. 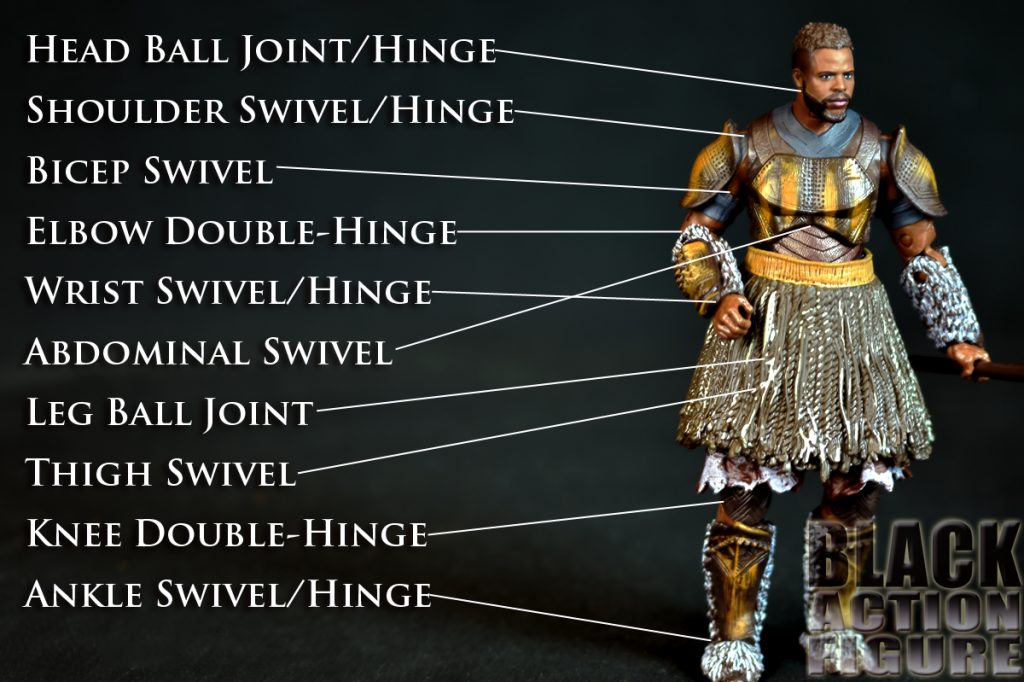 This M’Baku figure has about 29+ points of articulation. Initially, this number is impressive. In reality, there are a lot of issues to contend with. 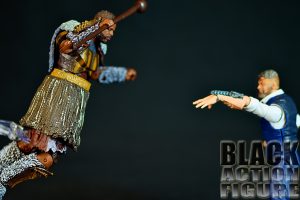 The main issues happen around the shoulders.  I originally thought that the cloak around M’Baku’s shoulders prevented some of the articulation.  In removing that cloak, I find I still have issues due to the figure’s shoulder armor. You lose more than half the range of motion because of that.

Other points of contention include the wrist, the legs, and the knees.  While it is nice to have double-hinged knees, you actually can’t use one of the hinges due to the battle wrap.

There is no waist articulation.  Instead, the body rotation is located at the abodomen area, which is an okay alternative to the waist.

Because of these limitations, many dynamic poses just won’t be able to happen. The best thing to do? Just have him standing there regally holding the staff. Long live the Jabari Tribe. 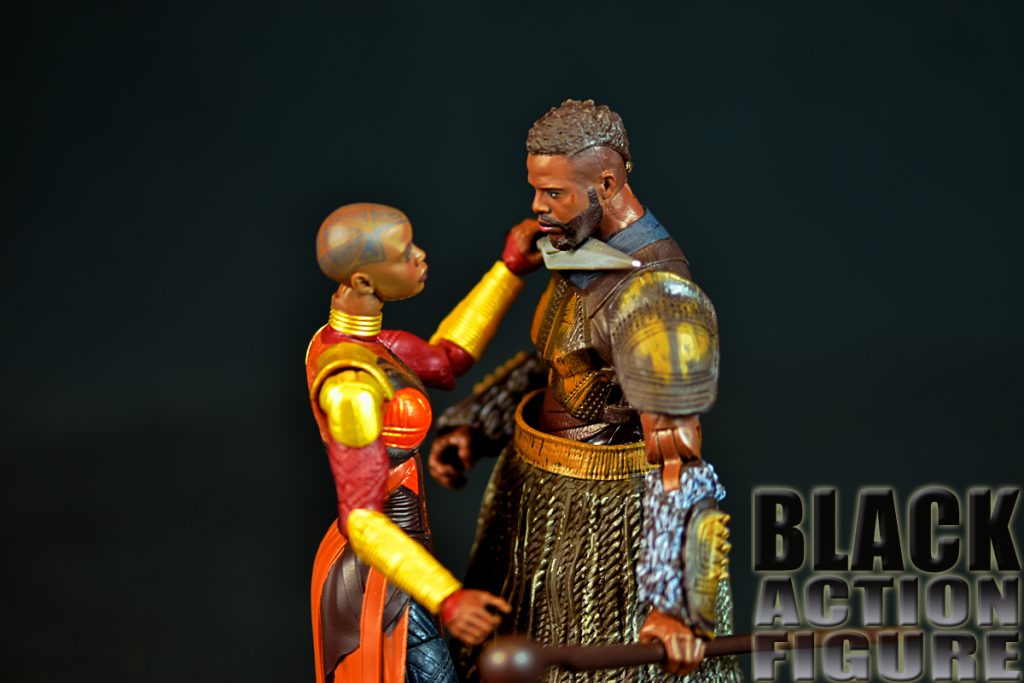 If you’re like me, I hope to see more of M’Baku in the future of the Marvel Cinematic Universe. I hope he doesn’t go the way of his comic book counterpart, but continues to be an asset to T’Challa and the country of Wakanda.

Although he probably has plenty of wives and kids, wouldn’t it be an awesome side story if he kicks up a romance with Okoye since W’Kabi turned out to be such a punk bitch?

Still waiting on a Shuri figure to round up the last of the Black Panther wave. I have a feeling we’ll be seeing it in an Avengers: Endgame wave pretty soon.

I hope you enjoyed my reviews of this wave!