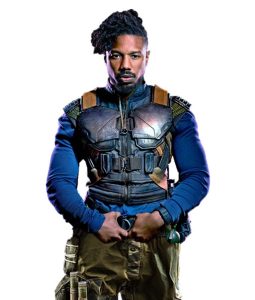 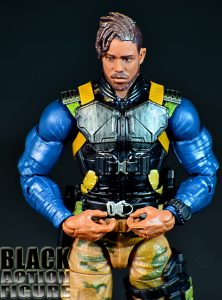 Out of all the figures that Hasbro initially did not make for the Black Panther movie, I believe commando suit Erik Killmonger was the most wanted among collectors and friends. Who wouldn’t want a bad ass military-garbed, armed-to-the-teeth figure with a kick-ass African war mask?

Fortunately, two things happened: 1) “Black Panther” made $1.3 billion worldwide causing 2) Hasbro to scramble to get relevant product to fans. Much like “Guardians of the Galaxy”, Hasbro once again had a misstep on just how popular this franchise would be. They did manage to get us an unmasked Killmonger figure in a Target-exclusive 2-pack (along with Agent Ross), but that still featured Killmonger in a Black Panther suit. We wanted that “save Klaw only to shoot his ass in the end” suit that made us sit up and pay attention whenever he was on screen.

Luckily, Hasbro was able to justify a second wave of Black Panther Marvel Legends figures giving us almost everything that we wanted: King T’Chaka Black Panther, two T’Challa Black Panthers with brand new photo realistic unmasked head sculpts, Dora Milaje army builders, Klaw, an M’Baku Build-A-Figure, and last but not least, this Killmonger figure. So was it worth a year wait for it? Check out the review… 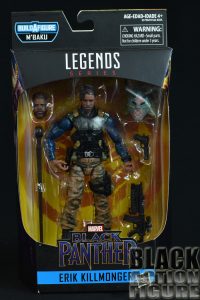 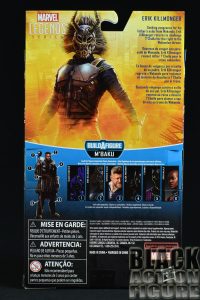 Yes, it took for me to open a few figures before I realized another major change in the Marvel Legends packaging outside of the first I talked about last review.

From the front, the packaging looks very similar to all of the Marvel Legends series that we have seen in the past, including the Black Panther wave from last year. It’s not until you turn it around that you notice the first major change.

Hasbro has stepped away from having a product shot of a posed figure on the back and have defaulted to an illustration of the character. Which personally, I do not like. When you do an illustration, you are somehow setting me up with either extreme excitement that the figure will look exactly like the illustration, or extreme disappointment that the figure was not represented as well as it was on the package. That is dangerous territory and I hope that Hasbro switches it back soon.

As such, I can’t increase the general score I give this packaging, but I will also withhold from decreasing the score as it still serves its purpose. 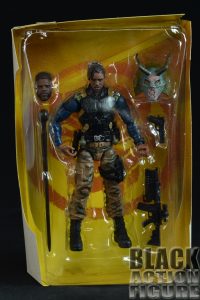 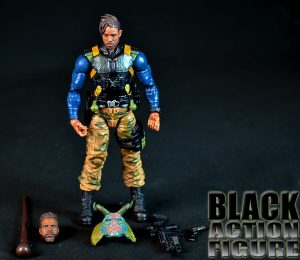 I haven’t been this excited about included accessories for a Marvel Legends figure in a while. Build-A-Figure pieces aside (M’Baku head and staff), we get the wearable African war mask, a pistol, and a grenade-launching assault rifle.

All accessories are sculpted well, and the African war mask is nicely painted as well. Seeing that the mask was one of the main reasons collectors wanted this figure, I’m glad that Hasbro took time to do it right.

I am slightly disappointed in the belt around the figures waist. It features grenades, knives, and a gun in the holster, but none are removable. It almost seems like a tease, but it authentically recreates Killmonger’s look in the movie, so it’s almost forgiveable…especially since they did give us a separate pistol.

The mask goes on and stays on easily. It looks good on the figure and actually makes me want to go back and rewatch that scene in the movie again. 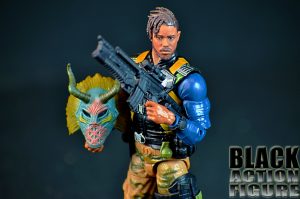 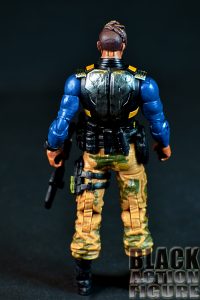 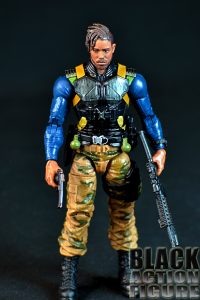 Technically, the body sculpt is accurate and the paint application is on point. And although Michael B. Jordan does play a light heavyweight champion boxer in “Creed”, the figure actually bulks him up a little more than he is portrayed in the movie. Not enough to dislike the figure, but enough to notice.

The headsculpt is good, not great. I don’t have that original Target 2 pack near me for comparison (damn, I need to review that), but I feel that they used the same head sculpt from that (if I’m wrong, please let me know). It looks like actor Jordan, but to me it’s one of those “it depends on the angle”. I feel that Hasbro has gotten better on their process than this particular figure shows and that they maybe didn’t feel the need to revisit resculpting a new head for this figure like they needed to do with the T’Challa figure.

Overall, the sculpt and paint apps are great (maybe a little exaggerated in some places). This figure is a welcome edition to my growing Black Panther movie collection. 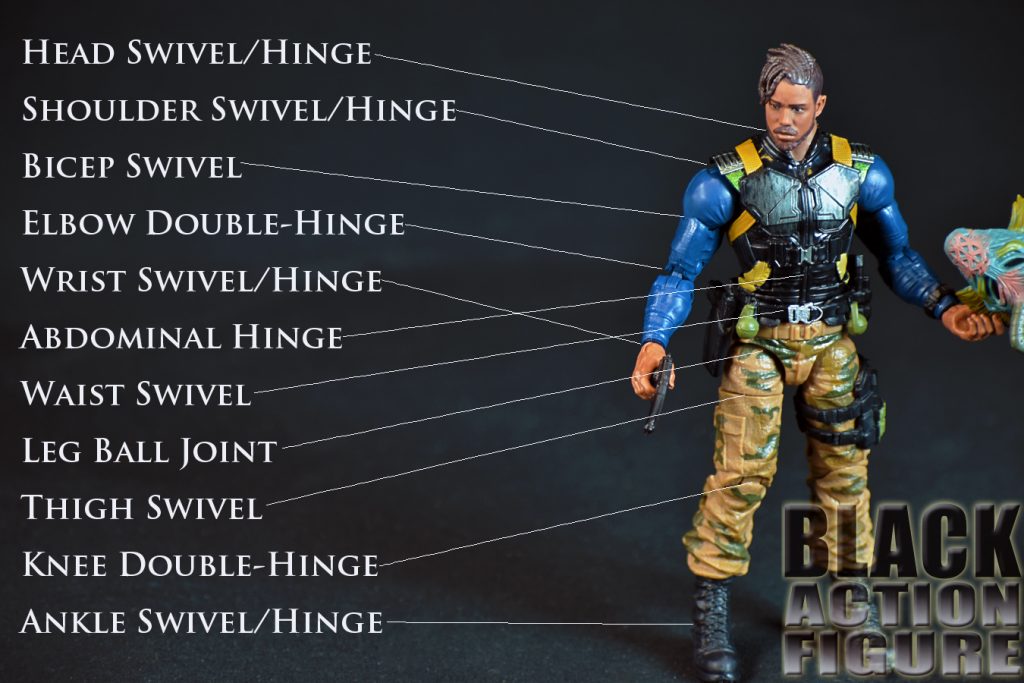 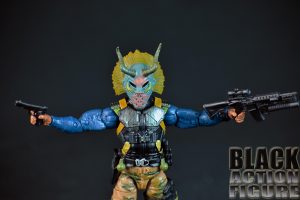 Absolutely no complaints here. This is the usual stuff that Hasbro does and excels on over other toy manufacturers. The fact that they get it so right makes it so disappointing that other companies like Mattel and DC Collectibles don’t.

This figure has 30+ points of articulation. I had plenty of fun posing this figure and it being able to hold the pose. The center of gravity is also well allowing the figure to stand easily even when all accessories are put into place.

I don’t know why, but my favorite point of articulation is if the head is able to look up, which this figure can do well.  There are so many dynamic poses that involve that level of articulation and the fact that other companies can’t get that one thing right means that Hasbro will continue to dominate this market. 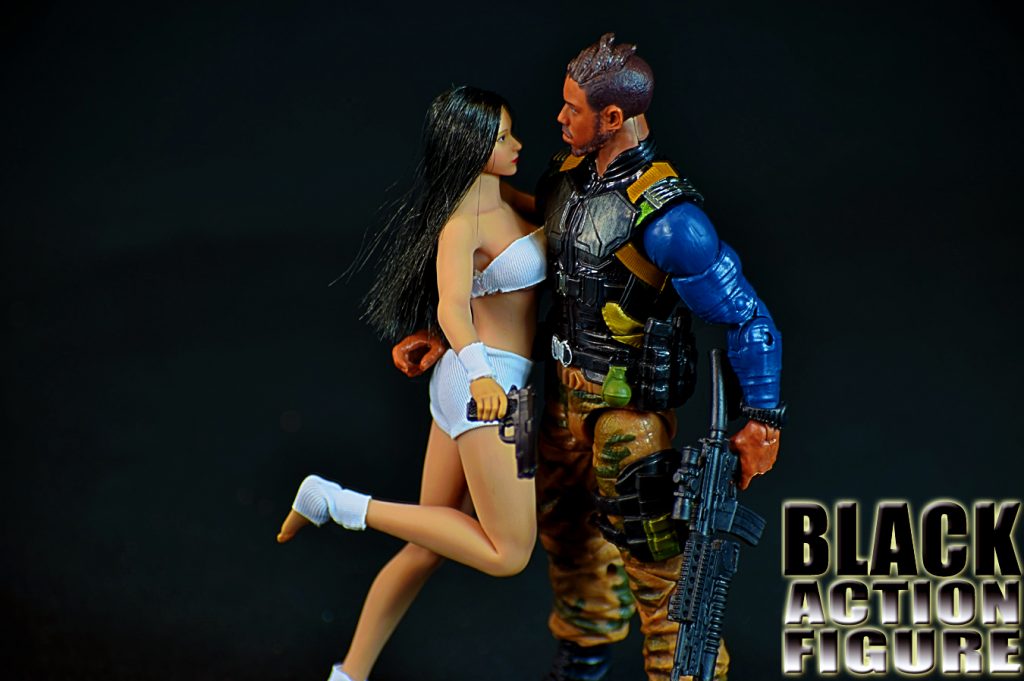 I wonder what kind of movie this would be if it focused more on Erik Killmonger and fleshed out his days as a CIA assassin? Loving women all over the globe, then discarding them as easily as he did his “girlfriend” in Black Panther.

If Erik just let his life continue on instead of trying to exact revenge on his uncle T’Chaka who killed his father and his cousin T’Challa who denied him of his possible birthright, I wonder what that would have been like? I think I want to see that movie…

In other news, Hasbro finally announced the figure people have been waiting on more than this one…a Marvel Legends Shuri figure. How that missed both waves of Marvel Legends figures is beyond me…

Loving this wave so far, but I think I would like to hurry on and get the other figures reviewed so that I can build my M’Baku figure and review that as well. More to come soon…