I know, I know, I feel bad about that. My schedule sometimes sucks, but I’m making a commitment of trying to review most of the Marvel Legends Black Panther Movie Wave 2 figures within the next week.

Luckily, I started with the easiest one. “Why?” you ask?  It’s because I have essentially reviewed this figure before…

First up is Black Panther himself…but this is the same exact figure as the one made for “Captain America: Civil War” and the suit shown at the beginning of the Black Panther movie with one main difference – it features a new unmasked head sculpt that uses Hasbro’s new face sculpting technique that allows them to be a closer match to the actual actor. How did it turn out? Check out this Quick Review that will use some of the scores from the previous review found here and update them as needed… 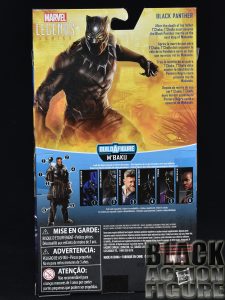 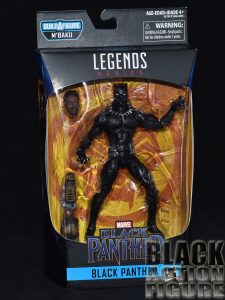 Hasbro has actually done a couple of changes to the packaging. For one thing, although you won’t be able to tell until you take the figure out, but the front window of the box is actually now part of the plastic insert on the inside, acting as a pseudo-cover to the figure. I imagine this could possibly be a theft/fraud deterrent for those who feel entitled to cheat the system, or it could just be another cost-cutting measure. Maybe a little of both.

On the back instead of a picture of the figure in a pose, we get artwork of the Black Panther. How do I know it’s artwork? Because I have the same wallpaper on my laptop right now as I write this.

We do get a good look at the other figures in the set that when all seven are purchased, includes Build-A-Figure parts to put together fan-favorite M’Baku.

I actually originally scored the packaging higher than I have for a similar Marvel Legends figure, so in sticking with the situation at hand, I will be keeping this the same score. 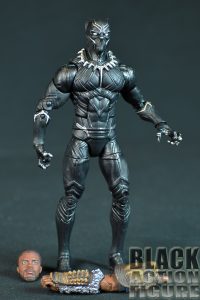 The real gem of this re-used figure is the other accessory…the photo-realistic looking additional head. We’ll talk more about that in the Sculpt/Likeness section.

The original score for the other figure was a 5.5/10.  I’m increasing this score another point and a half, to 7.0/10 for both the head and the M’Baku part that comes with it. 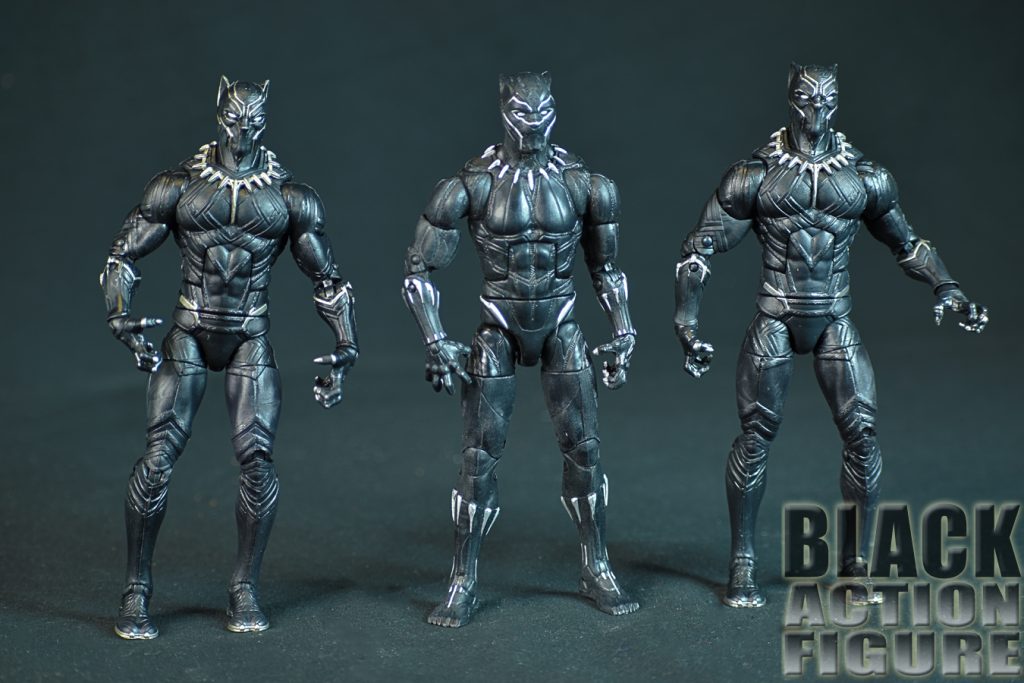 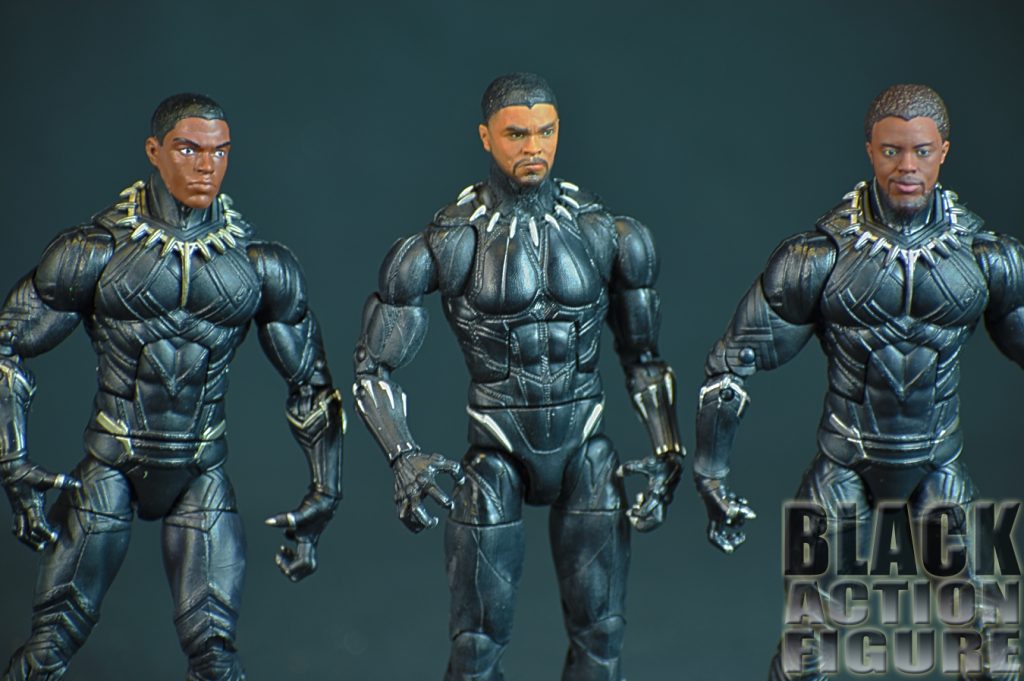 Which is funny because they had this technology when they made the middle figure…but instead of Chadwick Boseman, we get Michael Evans from Good Times. How did they go so wrong with that head sculpt? It wouldn’t have been so bad if they even got the correct color, but they messed that up too. Luckily, Hasbro got us to pay $20 (again) to get the most accurate likeness of Chadwick Boseman that we can expect for a $20 figure. And it’s pretty good. 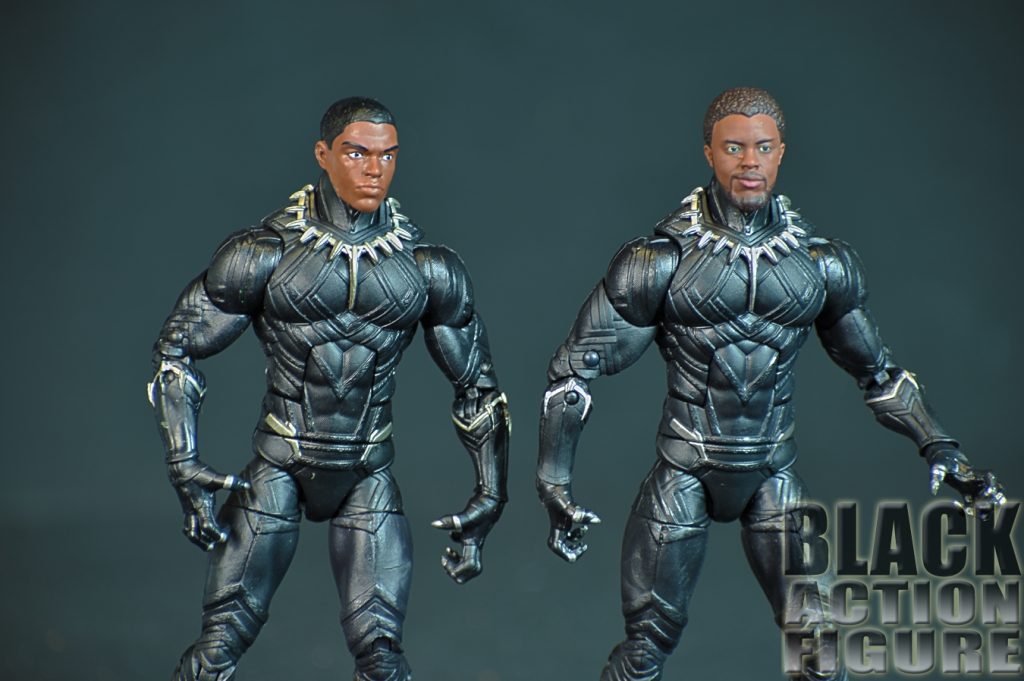 Taking a look at the evolution of the two figures in the space of three years makes me happy to know that Hasbro is continuing to push the limits of what they can provide to us on a limited budget. With so much competition out there coming from Diamond Select, Bandai (SH Figuarts), Medicom, Mezco, etc., they needed to do something to stay in the game. Hasbro’s usual game of quantity over quality was losing them market share, but quality and quantity may just win it back for them.

I would like to also mention that I love the little smirk they give him. Sometimes some emotion just works well on an action figure. This smirk makes me think he just got saying to Okoye, “I never freeze!”

For all of these reasons, they deserve a very rare perfect score.

Articulation
Seeing that it is the same figure as before, the articulation score will stay the same. Still pretty awesome articulation. 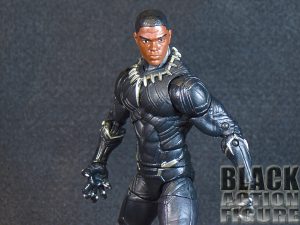 You can see in three years, Hasbro is not the only one improving. I have constantly been trying to get better and better with my photography and photo editing skills, and I think these two pictures taken about 3 years apart shows that. You want to see an even bigger difference? Go to one of my earliest reviews and see what I was doing with a Canon point-and-shoot 5 megapixel camera.

Just want to take the time to thank y’all for keeping up (and putting up) with me over the years. I’m hoping to make 2019 a momentous one…I’m going to the 50th Anniversary San Diego Comic Con this year and will be bringing you up-to-date information…with pictures that I have actually taken myself! Next year I may expand that to go to the New York Toy Fair. Just going up from there! Thanks for your support!