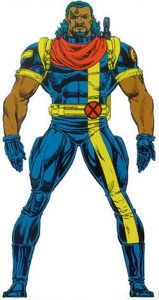 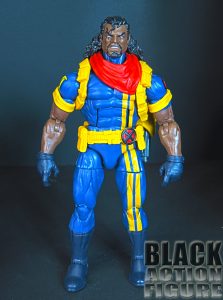 Hair choice aside (natural? relaxer? futuristic jheri curl?), Bishop’s power set and general bad-assed-ness quickly put him to the forefront of characters in the Marvel universe.  Unfortunately, writers sometimes didn’t always know what to do with him and have given him a more convoluted time-traveling history than Cable.

Beyond character history, Bishop has shown up several times in plastic form in these last 25 years. Toy Biz has done a few including a Marvel Legends figure with one or two variants.  The last Bishop figure to come around was Hasbro’s 3.75″ version…but this time around, Hasbro has finally graced us with a 6″ Marvel Legends figure. Unexpectedly, they chose to produce him as he looked in 1992 instead of his more modern dread-locked look of today. So are we still hyped over this figure?  Let’s check out the review… 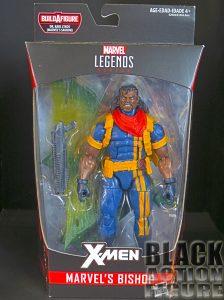 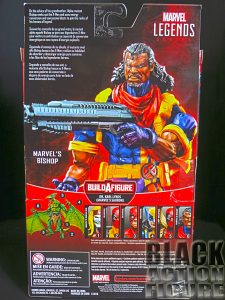 I really want to talk about the series that Hasbro squeezed together.  This figure came out in the second wave of Deadpool figures, including three Deadpool figures (Mad-Cap Deadpool, Deadpool in underwear, and Lady Deadpool) along with X-Men heroes and villains (Bishop, X-23 Wolverine, Omega Red, and Sauron).  I’m not complaining, I’m just wondering why they chose to stick this figure in a Deadpool wave, since their interaction over the years hasn’t been very memorable if any at all. Whatever….thanks for the Bishop figure any way it comes Hasbro.

I always like the fact that the prototype figure picture on the back matches what we have received. I don’t have to wonder what “could have been” since we have received an almost exact figure.

All of that to say that I’m giving this the basic Marvel Legends packaging score. I think Hasbro needs to take some drastic steps in updating their packaging like Mattel continues to do every couple of years. 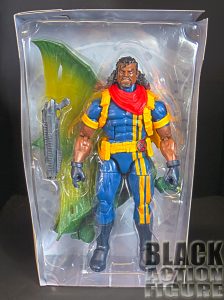 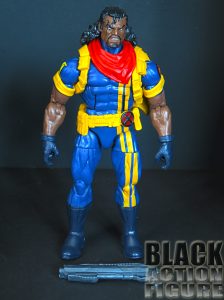 There’s a lot of molded plastic in the box, but unfortunately (depending on how you feel about it), half of it belongs to the Sauron Build-A-Figure, in this case, a gigantic winged arm.

This leaves Bishop with one single accessory…his signature big-ass gun. And while not really an accessory per se, they did include a back holster for the figure’s big-ass gun, which of course correlates to how he usually carries this weapon in the comic books.

I really wish that Hasbro could have showcased his power-set.  Bishop is a mutant who has the power to absorb and redirect energy into powerful energy blasts. So would it have killed Hasbro to include maybe one of those billion of Iron Man blasts they have given us over the years? Now I’ll have to dig an old one out to modify it for Bishop’s hand.

A couple of more additions would have made this figure near perfect. Multiple heads would have given us our Bishop of choice. I wish they could have included a bald head and a dread-locked head covering Bishop over the ages (but either/or would have sufficed).

I was also bothered by the hands. Both of the figure’s hands are in a trigger-finger pose, which means you can put the weapon in either hand, but I would have loved maybe an alternate pair of hands with clenched fists. 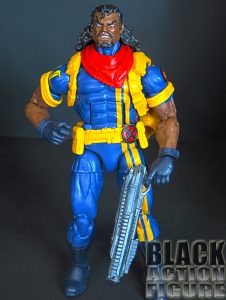 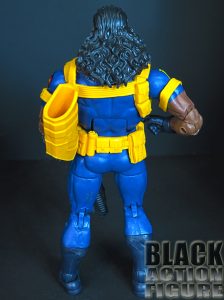 As far as I’m concerned, this is a pretty faithful representation of the original Bishop, whether you read the X-Men in the early nineties or was introduced to the character in the Fox X-Men animated series. This is what he looks like down to the tattoo’ed “M” over his right eye (a gift from the mutant concentration camp he grew up in to signify that he was indeed a mutant).

The sculpt is on point. The bright blue and yellow X-Men uniform go well with his red scarf/bandana around his neck.

Looking from the back, you are promptly presented with his flowing locks. Apparently, he is at least part aborigine (being the great-grandson of aboriginal X-Men ally, Gateway) which may explain the hair. Over time he has gone to a close cut, to being bald, to various degrees of dread-locks.  But this is the version we got, so take it or leave it (I’m good…for now).

The holster is huge on his back, but we really don’t see his holster so I have nothing really to compare it with.

I’m honestly just fine for this being a great sculpt and likeness overall of the character.  If someone asked me who Bishop was, this is the figure I’m pulling out to show them. 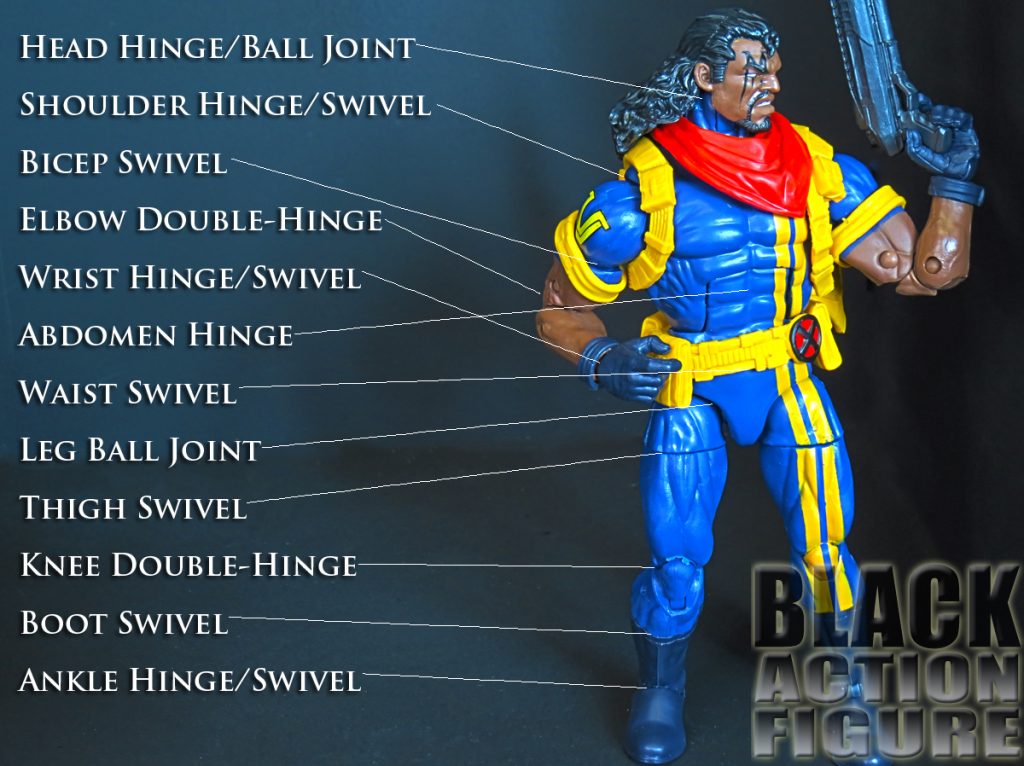 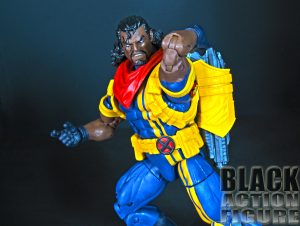 Can’t say if I’m more impressed or happy that Hasbro continues to put out quality figures with excellent articulation counts…  This figure has over 32+ points of articulation. No surprise there from the Hasbro camp…

The long, luxurious head of wavy Bishop hair prevents the figure from looking up.  With that said, this character can look almost all the way down.

The wrist articulation is weird too…instead of in and out, it goes more up and down.  You would almost have to have the figure to see what I mean.  I can almost understand why they did it too, but it’s still weird to me.

The muscles in the figure’s legs and arms also prevent the double-hinged knees and double-hinged elbows respectively to bending all the way back.

All these things I can live with since the given articulation continues to be impressive. 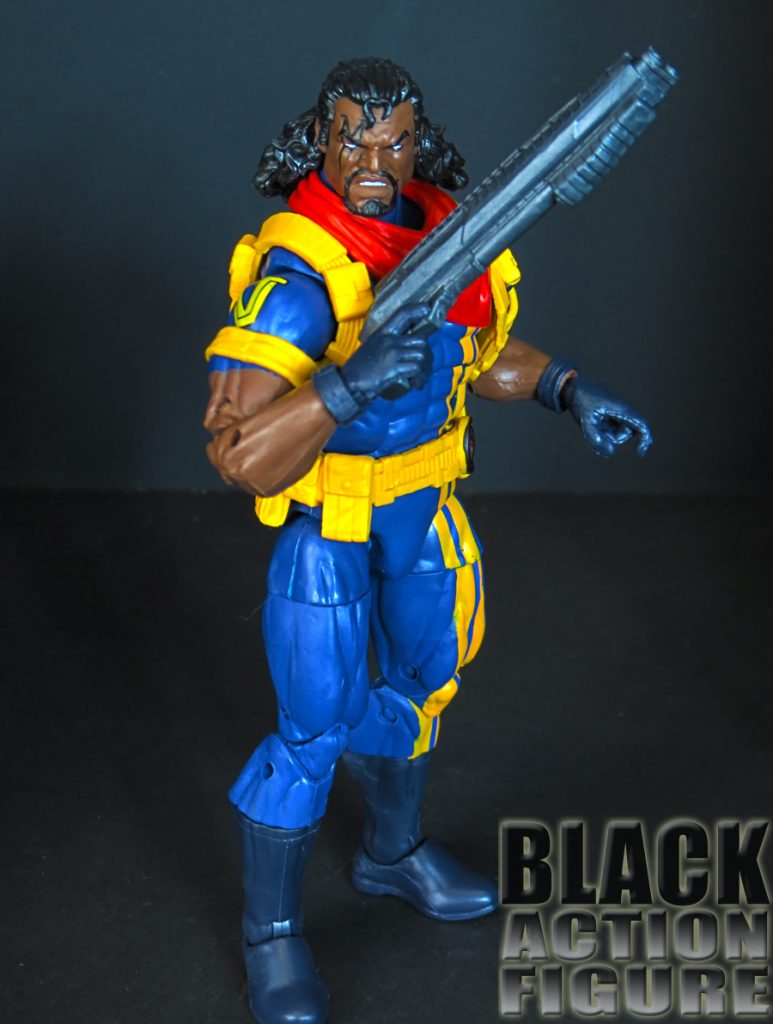 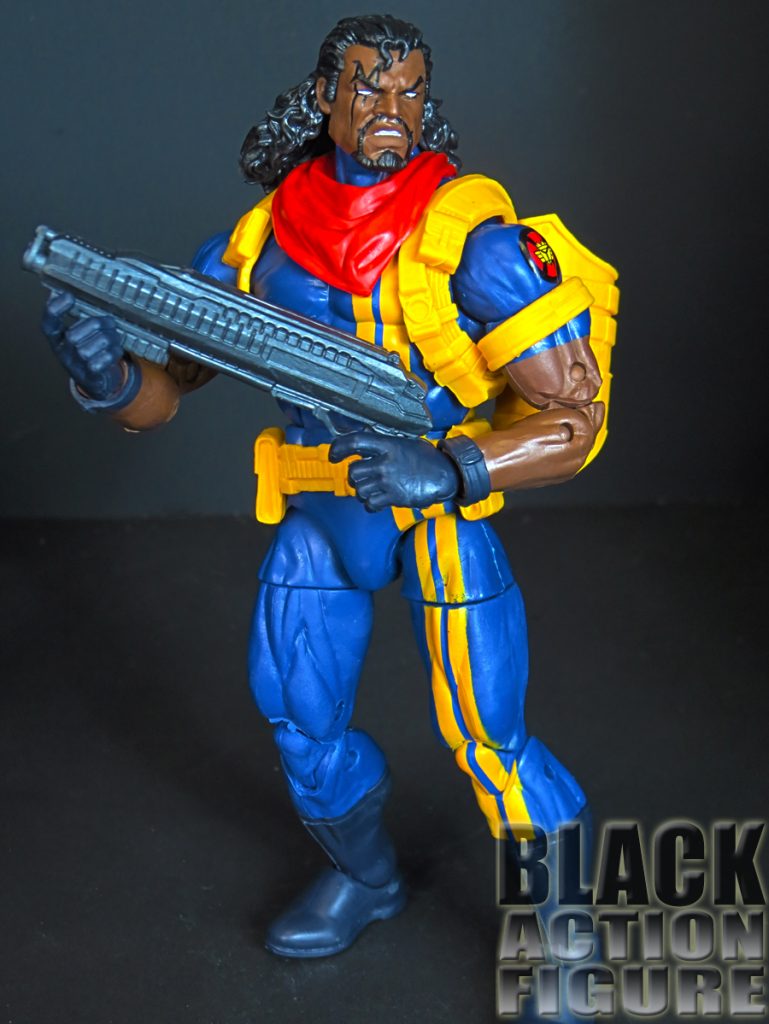 Not much more to say about this character outside that I hated when they made him a villain back in 2010.  That always rubbed me the wrong way.  But, oops, he was possessed by a demon bear and came to his senses and is now a good guy again.  He even gets to rejoin the X-Men proper…

If you have ever liked this character, go out and get it, you will not be disappointed.  If you weren’t a child of the 90’s like I was, then this figure may not appeal to you.

In all cases, this is an excellent figure to get.  I can’t wait to get the rest of the Build-A-Figure parts so that I can put together Sauron…Now that will be an awesome figure!

If you can’t find it in stores, you can get it here: