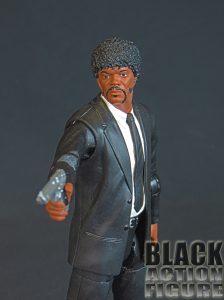 I did a Pulp Fiction intro with my Marsellus Wallace review, so I will just keep this intro praising the works of Samuel L. Jackson.  Sam Jackson is hands down the most iconic American actor in cinema today.  Not only has Jackson played in a bajillion movies, he is the only actor I know whose likeness has graced the most number of unique action figures from the varied characters he has played. I have reviewed many of them on this site including Mace Windu, Nick Fury, and Shaft.

I honestly think Quentin Tarantino movies has produced the most Sam Jackson figures to date.  I alone have three different Jules Winnfield figures (with another on the way), two Major Marquis Warren figures (from “The Hateful Eight”), and a Stephen figure from “Django Unchained”. This man is incredible! I would like to think that somewhere in Sam Jackson’s mansion, he has a display case in his man cave filled with nothing but action figures to himself.  With that in mind, is this figure a worthy addition to his (possibly fictional) collection?  Check out the review… 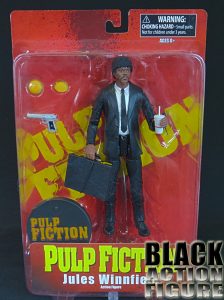 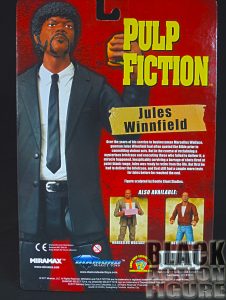 The packaging is nearly the exact same as the Marsellus Wallace packaging I reviewed last time. Just to note, it’s not all that spectacular until you realized that Diamond Select has done two different types of packaging for this figure.  The thinner type as you see here was made for mass distribution in retail stores like (the late) Toys R Us. This allowed them to utilize the best use of their space.

If you purchased the figure from a specialty shop (comic book store, Amazon, etc.), you may have received your figure in that ultra thick packaging that Diamond Select is known for. You know, like the ones that comes with their Marvel Select figures. The one that once you open it either takes a set of bolt cutters or some unnatural act of God to get the figure and accessories free.

Did I have any issues freeing this figure from the packaging?  A little, as there were at least eight different twisty-ties holding the figure in. But considering I opened ten Marvel Select figures back to back and had bloody fingers by the time I was done, so this was a welcome change. 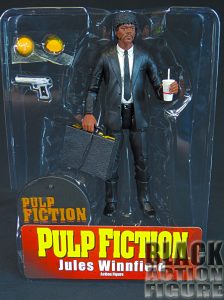 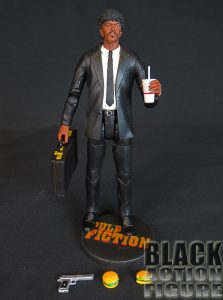 Remember that suitcase I wanted with the Marsellus Wallace figure? Well, it came with this figure…but it still doesn’t open and glow like I wanted it to do. But a nice addition nonetheless.

We also get a figure stand, a semi-automatic pistol, a whole Big Kahuna Burger, a partially eaten Big Kahuna Burger, and a soft drink.  The latter three accessories of course made infamous from a portion of the movie where Jules and Vincent recover the suitcase.

As far as accessories go, I can’t complain. All accessories of course refer back to the movie. I would have actually been okay with just the suitcase and the gun, but Diamond took it a step further and added the fast food in for a little fun.  And I’m perfectly okay with that.  It made for an interesting photo shoot.

The accessories were absolutely better than the ones that came with Marsellus. Even though I think the two different hamburgers were a bit redundant, the variety is appreciated. I really wish that case opened though… 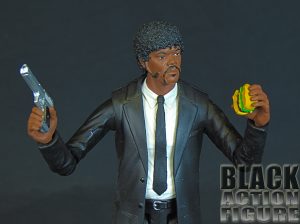 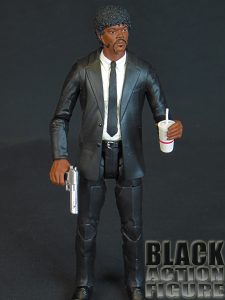 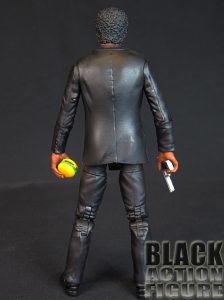 I think the people in the industry have been doing Sam Jackson sculpts for so long that they pretty much got it down on how Sam Jackson looks.

What’s right: the sculpt of the suit is great, good head sculpting, the jheri curl with the sideburns continuously made me laugh while taking photos, and the paint application is almost good.

What’s wrong: it’s 2018 and we still can’t get the eyes on action figures correct. Don’t get me wrong, Sam Jackson has a crazy moment in nearly all of his films. But the obvious paint mistake on this figure’s eyes make him look more like Stephen from “Django Unchained” than Jules Winnfield. Or maybe even Gator the crackhead on “Jungle Fever” when he was doing his last dance for his momma and his father shot him. Yeah, that’s the look he has. Not the badass assassin look he carries for most of “Pulp Fiction”.

I would also like to point out that this figure could have used some extra hand sculpts. The way the hands are sculpted allows for the gun or the case in the right hand and the soft drink or the hamburger in the left hand. But what if I wanted to switch hands? The right hand was also difficult to place the gun in. 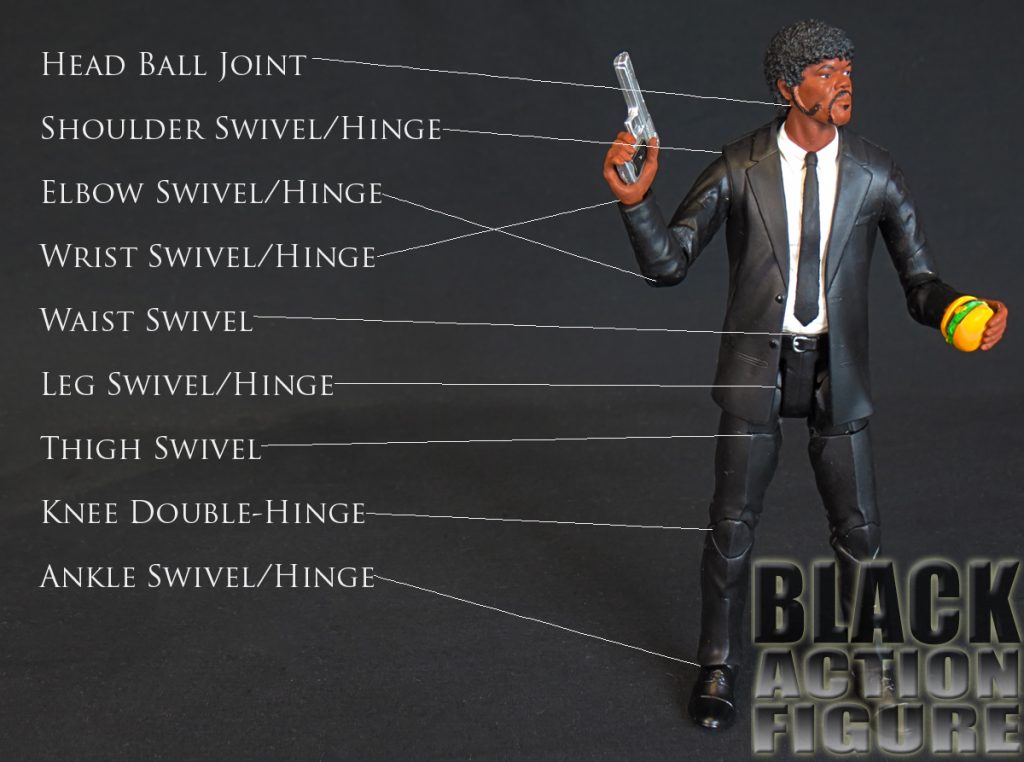 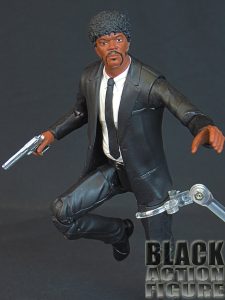 No surprise, this figure has the same exact articulation as the Marsellus Wallace figure…so we’re looking in the range of 26+ points of articulation. Like the Marsellus figure, this would normally be great, but I really don’t see this as a character that I would be doing many “action poses” with.  I did one or two for this photo shoot, but when I put this figure on display, it would most likely be just in a regular stance.

And I’m okay with that.  Yes, thank you Diamond Select for the option of having my figure run, sit, bend, etc., but what it will do most is probably stand.

I always have an opinion about range of motion for the neck.  I like my figures who have the ability to look up.  It’s just not there with this figure.  For the most part, the range of motion in the neck area is limited to left and right and slightly down.

The joints are super stiff too. I didn’t realize there was a waist swivel on this thing until I exerted about 3 times as much force as I usually do with action figures. The more articulation, the better, but I really don’t see using it with this character. 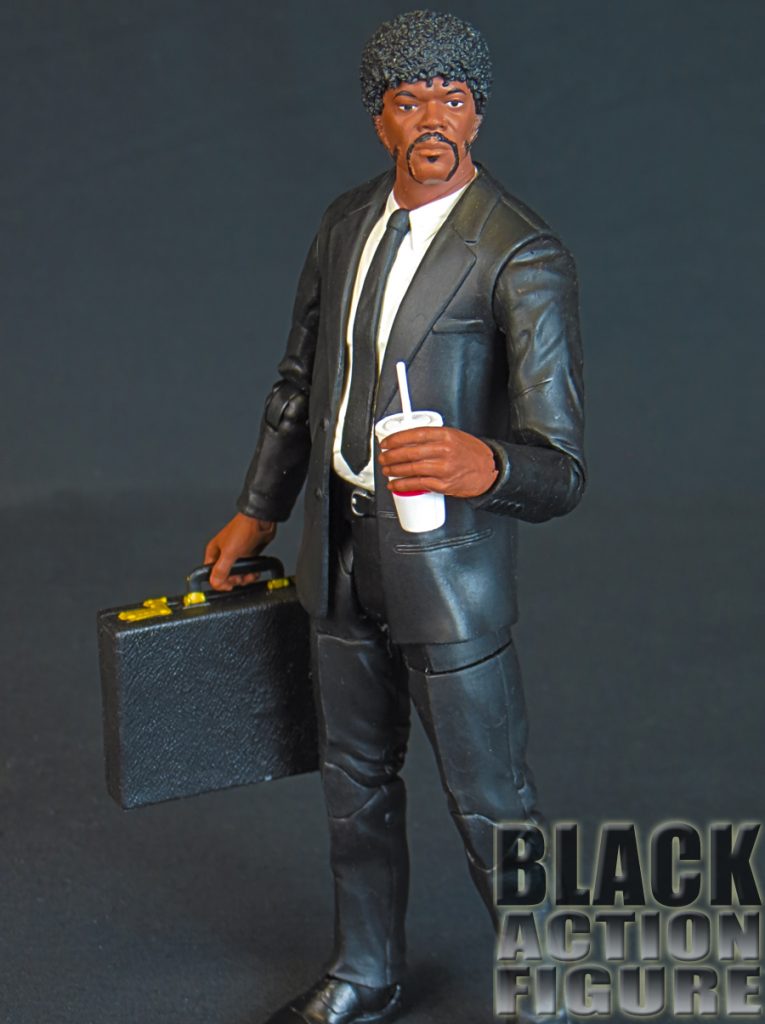 I’m happy I was able to pick up this figure. Like I said, I already own two other variations of this character (with another on its way). Pulp Fiction was an iconic cult classic.  While I can’t say this was a breakout film for Samuel L. Jackson (who’s to say which one that would actually be…I’ve been seeing Sam Jackson since Spike Lee’s “School Daze” back in 1988), this was probably one of the movies that made Samuel L. Jackson a household name for most of the world.

On other news, I may have enough Sam Jackson action figures to dedicate one shelf to him and only him. How epic would that be?