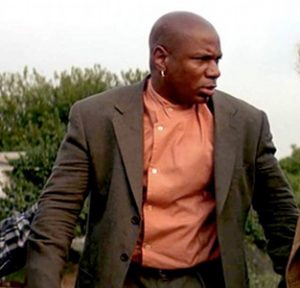 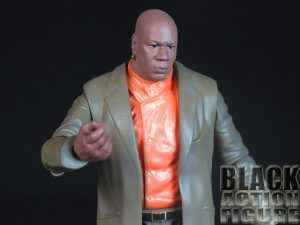 Next year (2019) will mark the 25th anniversary of one of Quentin Tarantino’s cult classic movies, “Pulp Fiction”. No matter what you may have thought of it or how it may have left you feeling after watching it, chances are it left a mark on you somehow. One of the standout characters in the movie was crime boss Marsellus Wallace played then by relatively unknown actor Ving Rhames, whose mark on this movie shot his stardom up several notches and is even today playing in one of this summer’s hottest movies (Mission Impossible: Fallout).

While adult action figure collecting wasn’t as prevalent as it is now, it is still hard to believe that we had to wait over 20 years until a Marsellus figure has been made. But thanks to niche company Diamond Select, we finally have one to add to our collection. Was it worth the wait? Check out the review…. 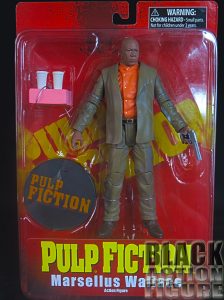 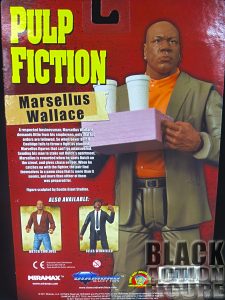 Did you know that depending on where you purchased this figure that the packaging could be different? Case in point, I purchased mine from the now extinct Toys R Us store, and realized that Toys R Us brokered a deal with Diamond Select to offer slimmed down packaging of their figures. I first noticed this with their “Gotham” line.

I expect TRU did this to maximize shelf space. The original packaging is big and bulky and where they cut perhaps only fit two of those on a peg, they could easily get 5+ of this type packaging on a peg. I really have to applaud the effort…I hate all of that extra packaging that Diamond Select sometimes makes us sludge through just to get to the figure. This “packaging lite” version is absolutely noteworthy.

Unfortunately there is no more Toys R Us, so don’t expect to see anymore slimmed down packaging…unless Diamond decides to do different. Bubble on a card back is just fine with me. I can see the figure and accessories plainly. 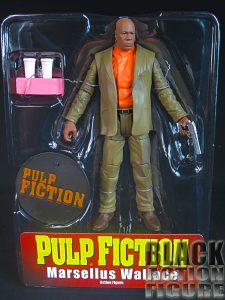 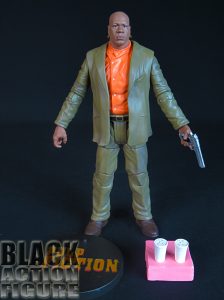 I love accessories, especially when they relate back to the story of the character or if it adds depth and functionality to the figure. I believe all three accessories do just that.

This figure comes with a semi-automatic pistol, coffee and donuts that the character is seen carrying in the movie, and a figure stand. All accessories of course much appreciated.

But what of the mysterious glowing suitcase? That would have been a great accessory to add. But logistically, I can see where it probably wouldn’t have worked.

What I’m glad it didn’t have? A separate “GIMP” outfit…thank you for leaving that one out…

I still feel like there could have been more, but for the price, I guess it’s good we got what we did get. 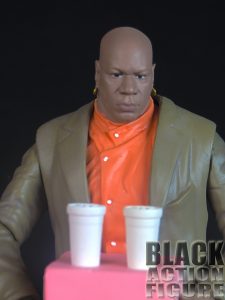 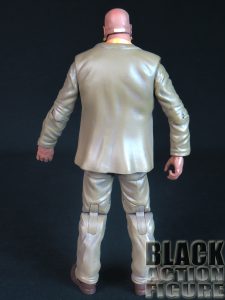 I think now is a pretty exciting times for action figure collectors. For between $20-$30, we can get a near-accurate sculpt of a character’s face where the lay-person can pick it up and know instantly who the character was and where it was from. And even if you didn’t know what movie, it’s easy to know that this figure is Ving Rhames.

The detail of the sculpting is there, from his broad, muscular features down to the bandaid on the back of the characters neck. The only thing I wish it had more of was a more detailed paint application. A black paint wash would have done wonders for accentuating the features in the sculpting (adding shadows to produce more detail). If I had the artistic skill myself, I would definitely try it, but unfortunately I don’t have the time, nor do I have the skillset, so until I can get ten more minutes out of my day, I will keep to what I have. 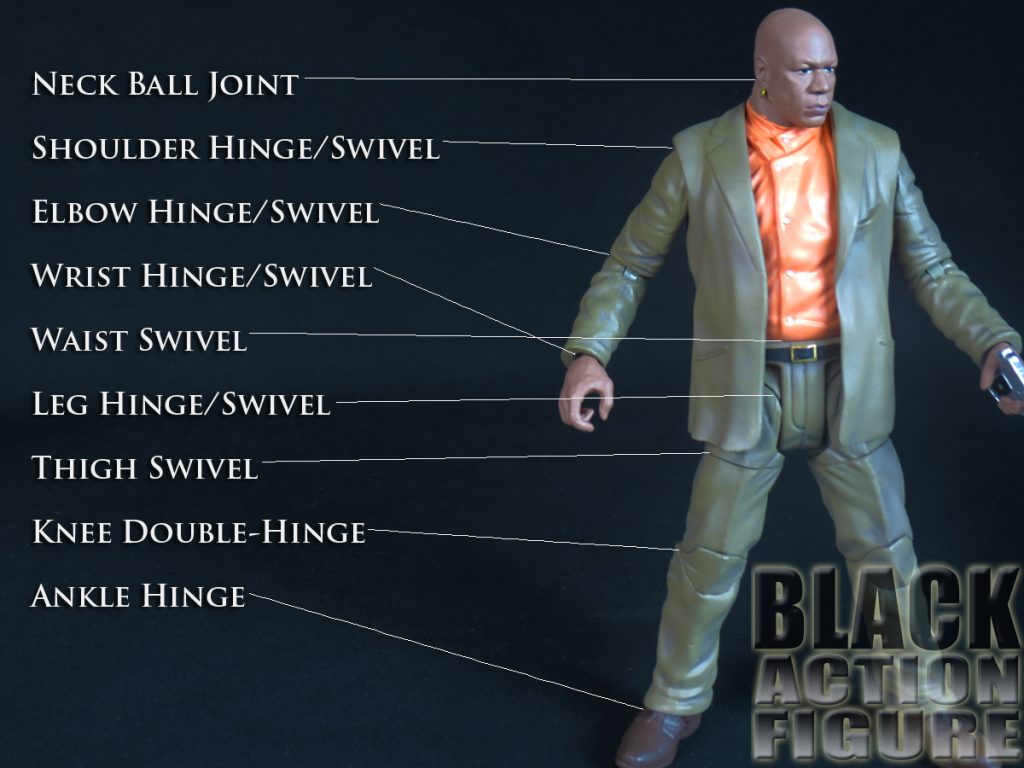 This figure has a pretty impressive 26+ points of articulation. I say impressive because it is almost at Marvel Legends scale of articulation.  Unfortunately, the stiffness in the joints lead to issues bending and turning and while posing this figure was solid, I can’t say with all certainty that it was “fun”.  I think ultimately, the figure is just going to be on my shelf standing there like a total badass because how else would I pose him?  (don’t answer that) 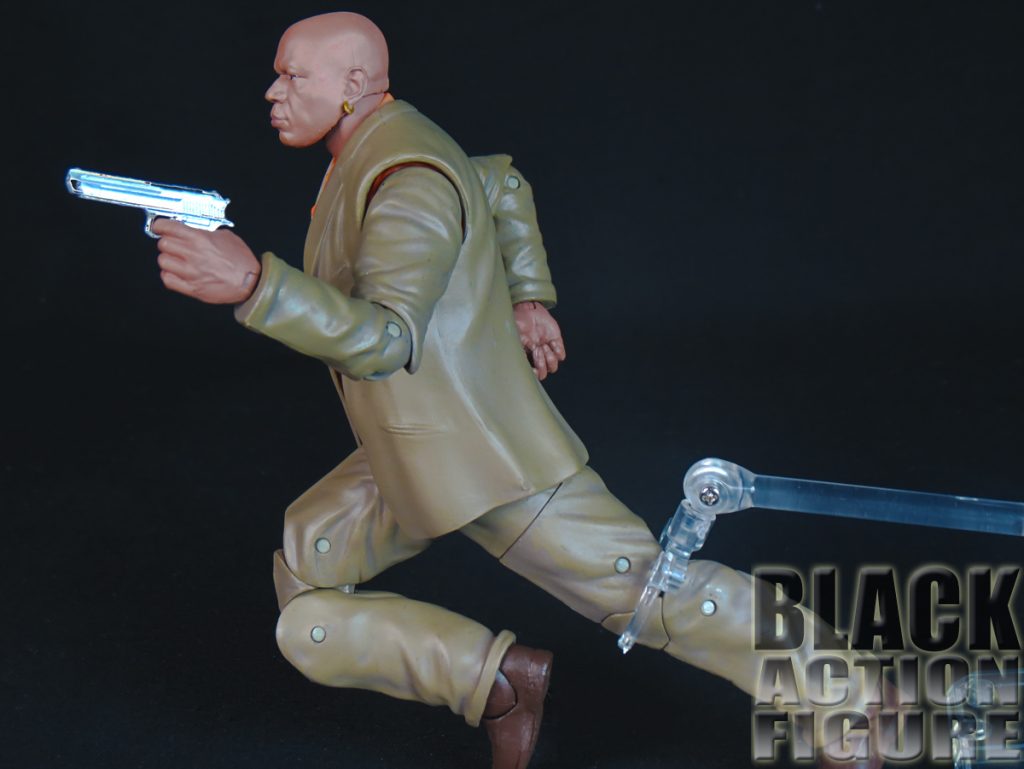 Pretty solid overall. The double-hinged knees were a nice touch. I wish it had maybe one or two more points of articulation, but like I said, ultimately this figure will just be chilling there on my shelf (like it has been chilling on my desk for the last three months since I’ve been sitting on this review). 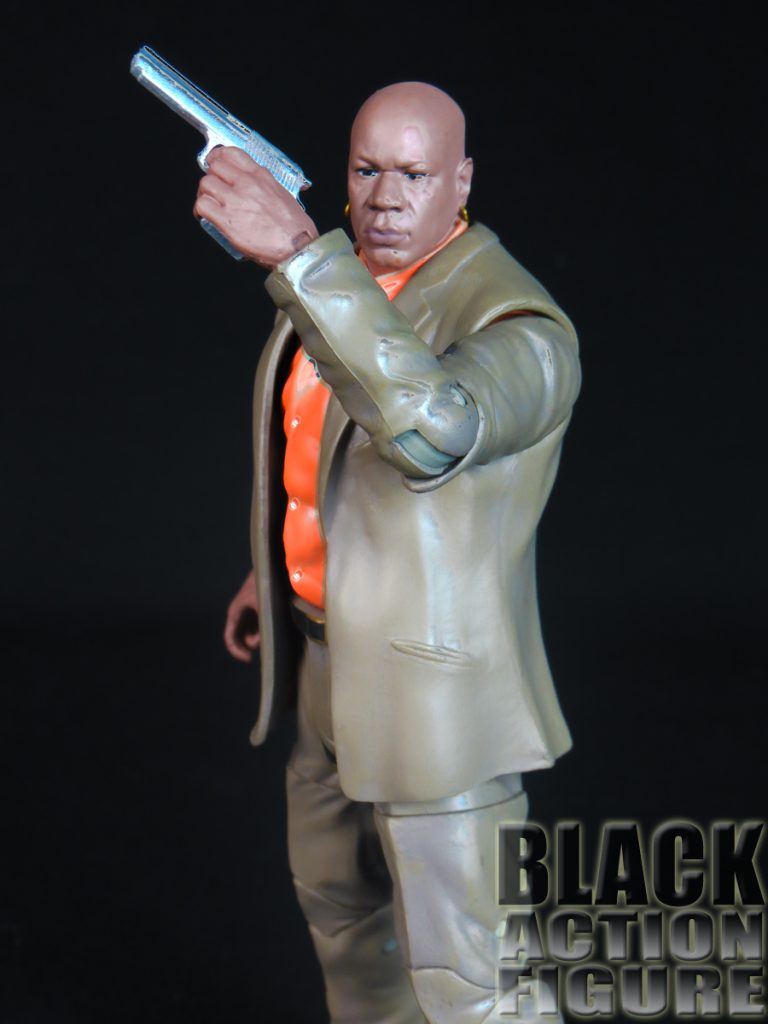 I can’t lie…I really like this figure. The detail in the sculpt, the surprisingly articulated joints, this is a must-have figure. Let’s hope it matches well with the Sam Jackson – Jules Winnfield character as well.

I have a feeling that this is the best we get in terms of a Marsellus Wallace figure, but here is hoping that we someday get a 1/6 version of the character as well. I would buy in a heartbeat

Until then, I can move this figure from my desk into my collection proper so other’s can enjoy it as much as I do.