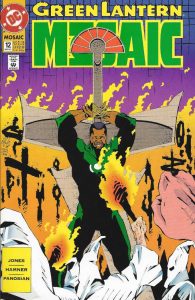 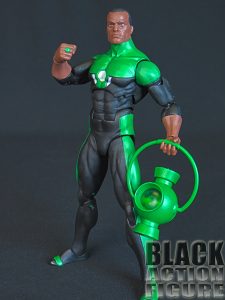 I’m ashamed to say that even though Green Lantern John Stewart is one of my favorite characters, I don’t know much about his time spent on the “Mosaic” world. This was written in the early nineties where I didn’t have much money towards comic books and the money I did have usually went to Marvel.

It turns out the Mosaic World was a collection of cities from different worlds joined together to form one society and John Stewart was appointed as the Green Lantern to watch over and guide them to accept their differences and form a peaceful society (thanks Wikipedia!). While the concept was original and apparently somewhat popular, the “Green Lantern Mosaic” comic book only lasted for a year and a half. This world was eventually destroyed by Parallax/Hal Jordan, but the citizens of the world were safely returned to their respective planets.

It has shamed me that it has taken over 25 years for me to learn what Green Lantern Mosaic was all about.  It has shamed action figure companies, and more specifically DC Collectibles, that it has taken them equally as long to come out with a more than acceptable figure representing this period in John Stewart’s varied history. Let’s check out the review… 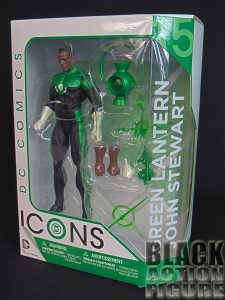 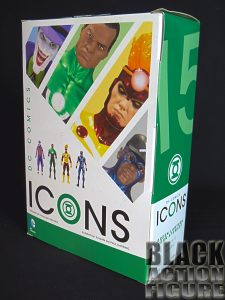 It is too bad that the DC Comics Icon line is dead…I love this futuristic, next level look in the packaging.

This is honestly collector’s style packaging made for sitting bookcase style on either the left or right side on a bookcase, displaying nicely face forward, or be like me and rip that bad boy out the packaging and enjoy the figure and accessories.

When handling nearly 60-80 Marvel Legends these last few years, it’s nice to venture out and check out the competition. Even if the figure is not up to par with Marvel Legends figures, the packaging is original and unique enough to keep you coming back.

I think I mentioned in my Static review that they paid a really good graphic designer some good money to come up with the packaging…and it shows. The clean lines, the white print on the clear window, and even the mixture of green and white (most notably since this is a Green Lantern figure) is prominent in every aspect. 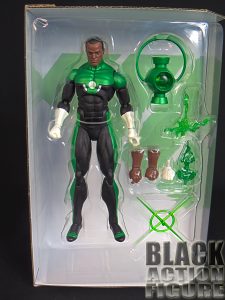 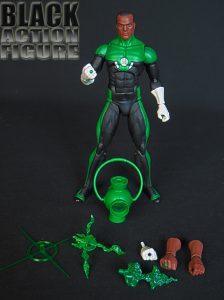 This is where this line shines in my opinion…at least for this figure. For a couple of dollars more than a Marvel Legends figure (you can still find these from $22-$25 each), you can get so much more…although most Marvel Legends figures are coming with Build-A-Figure pieces which usually makes up the majority of their plastic allotment.

At any rate, this figure comes with a Green Lantern (essential!), three ring constructs, a right hand with a place to connect the constructs, and two un-gloved hands.

I took some time to find out why this figure comes with gloveless hands…and found this little tidbit here.

For the most part, I love the constructs. Unlike previous GL figures these are just basic energy constructs that look cool in most poses…it didn’t have to be a giant fist or a sword or axe. Very unique in this case. I even found “Mosaic” comic books where the character uses these similar constructs. If you need more, DC Collectibles sells an accessories pack which contains two more constructs, and John Stewart’s squirrel companion, Ch’p.

If I were to ask for one more thing, I think I would like a glove-less hand that would allow us to attach the constructs on it. 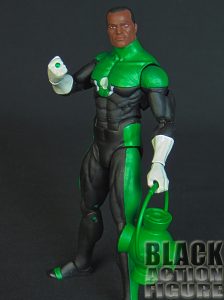 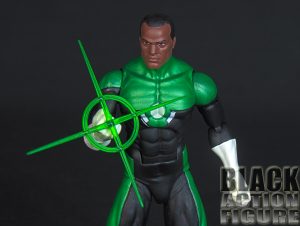 I have over the years collected at least two other “Mosaic” Green Lantern figures, and this one is hands down the most accurate in terms of likeness to the comic book.

The head showcases the comic book accurate facial features along with the receding hairline John started to get.

The uniform is the most accurate I have seen. Other figures have grossly proportioned Green Lantern’s logo on his chest incorrectly.

The glove-less hands are even accurate since the character removed them sometime during the series.

The constructs are made out of semi-transparent green plastic, which gives them an eerie iridescent look to them.

My main complaint about the sculpt, and this is not the first time I’ve had this complaint with DC Collectibles, but the ring on John’s finger is a featureless, circular blob. I thought DC Collectibles was past doing this to us, yet here we are.  I know they have the ability to make the ring look like a Green Lantern ring, but here they have failed spectacularly. 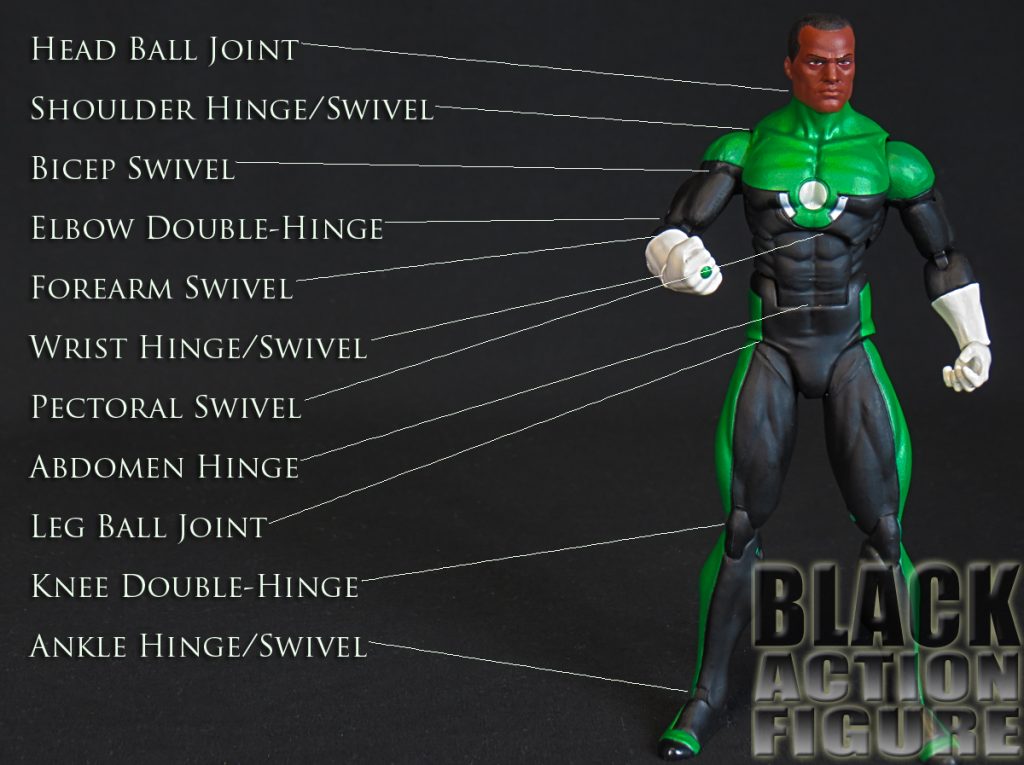 DC Collectibles has really tried to up their game when it comes to articulation. This figure comes with about 27+ points of articulation. Seemingly impressive, but unfortunately there are issues.

Starting with the head, the figure has the ability to look slightly down, but in now way can look up, which nowadays is a huge no-no, especially for “flying” characters. Figures based on flying characters must have the ability to look up so that they can be posed in such a way where it looks like they are “flying” through the sky.

Next is the double-hinge in the elbows. One of the hinges is made useless since the bicep is so big…the arm can not bend all the way in. It would have been better for them just to include a single hinge and save some embarrassment on placing a hinge on an arm that can’t take advantage of it.

Then there is the pectoral swivel and the abdomen hinge, both which are barely functional.

With all of the issues, this figure feels like it has maybe 22 points of articulation rather than 27. Another reason why this line ultimately failed. 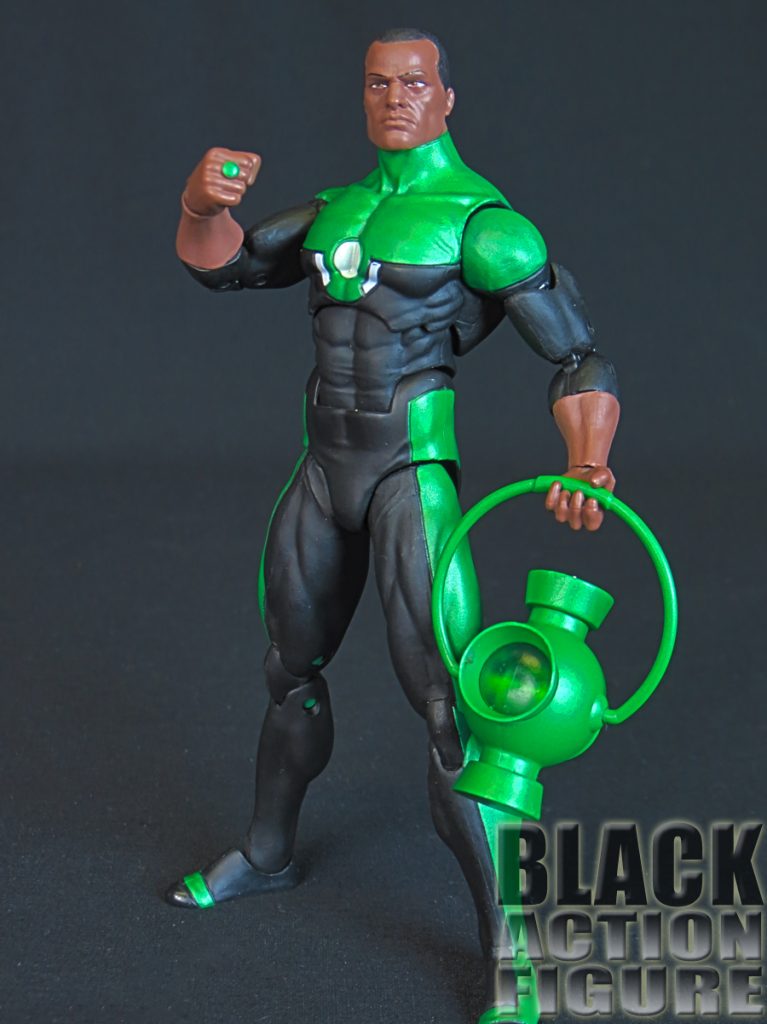 I honestly kind of like this John Stewart figure over the one I previously reviewed last year (seen here).  I think the accessories put this one ahead of the game for me.

I’m glad I finally know more about the Mosaic World series.  If you are a Green Lantern fan like I am, it is definitely worth looking it up and reading.

DC Collectibles new figure line, DC Essentials, debuts this summer. Good news, it may be more along the lines of Hasbro’s Marvel Legends!  Bad news, if you are a DC collector, you once again may find yourself picking up the same boring ass figures before you get to the real meat and bones of the DC universe.

This figure is worth picking up (check Amazon). If you’re a John Stewart fan, it’s worth a look.  Otherwise, you can wait to see what John Stewart figure DC Collectibles will put out in either 2019 or 2020.