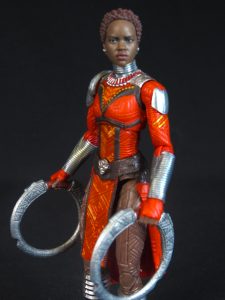 Back again and this time around, we’re reviewing the Nakia action figure, portrayed by Lupita Nyong’o in the Black Panther movie. I’m sorry, that’s “Marvel’s” Nakia…in case you got that mixed up with which Nakia was being referred to when you purposely bought the figure. I’m sure there are some legal reason’s as to why Hasbro has to add “Marvel” before some of their figures, and this is just the latest one to get that brand.

I was actually excited to get a Lupita Nyong’o action figure when it was first announced that she would be in “Star Wars: The Force Awakens”, only to be sorely disappointed that her character would be a short, wrinkly, 900 year old alien. Why would they belittle her like that? Here we have this beautiful, Oscar Award winning actress, and they just want to use some computer generated animation with her voice.

Fortunately, “Black Panther” made up for all of that. In it, she plays the love interest of the title character who even though has obligations to him as her king, she is supremely independent and would rather spend her time righting the wrongdoings in the world. “Nakia” becomes known as one of the three strong female characters (including Okoye and Shuri) that audiences highly praised in being an integral part of the movie and not just helpless background characters.

With all this in mind, can Hasbro translate all of that into a $20 action figure? Check out the review below… 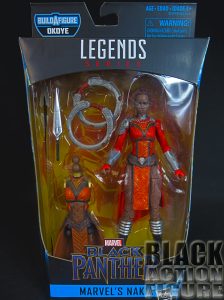 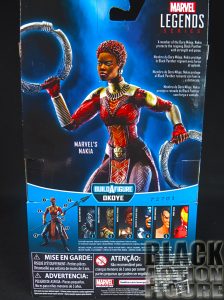 There’s really nothing different that I can say about the packaging that hasn’t already been said.

What the hell was going on with the prototype photo’d on the back of the package? It’s almost like this was an early draft of what we actually received because the figure on the back is borderline fugly, especially compared to what we actually received. I’m almost glad that this packaging is most likely going in the garbage.  I don’t want to have to look at it outside of this post ever again. That back picture almost makes me want to give this packaging a lower score, but luckily the figure inside was it’s own saving grace. 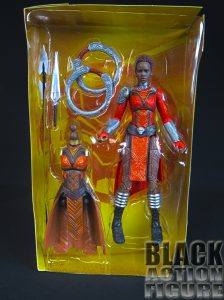 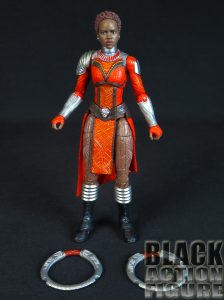 When I first bought the figure, I was confused because I originally thought Nakia came with two different bodies. I of course forgot that the Build-A-Figure for this wave of Marvel Legends figures was Okoye, and this was of course her body and weapons.

On top of the Build-A-Figure items, we do get Nakia’s vibranium chakram weapons as seen in the movie. Nicely sculpted, but details like the blue glow are missing (to be discussed more in the next section).

Can’t really think of any other appropriate accessory that could be included. If I were really to stretch it, we could have received another head with Nakia’s hair in Bantu knots, but we are probably stretching those liberties out a little, so I’m happy with what we received. 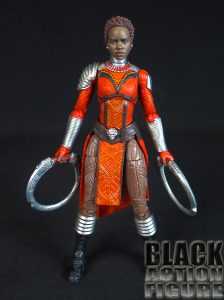 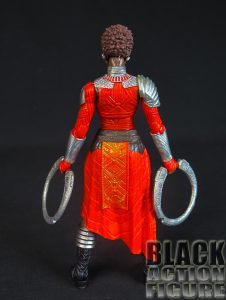 I actually couldn’t wait to get to this part of the review. I don’t know who did it, but this is probably not only a good likeness of Lupita Nyong’o (for a $20 figure), but probably the best depiction of a Black female action figure in the 6″ scale that I own. And this is after we have received a Marvel Legends Misty Knight and a Marvel Legends Monica Rambeau/Spectrum figure. The facial features are on point. The hair is on point. The sculpt is 1000% better than the prototype on the packaging.

If this is an example of that 3D imaging process I heard they were using now, they need to continue to use that system because this figure is awesome.

In terms of likeness, there are a lot of similar sculpting details and features that are found on this figure that is also shown in the movie.  But again, I feel that maybe this whole wave was rushed a little bit. There is detailed sculpting on the figure’s outfit and leggings, but it looks like that detail is missing some paint application.  And while the outfit is mostly correct, there are some details either changed or outright missing (i.e., armor is different on the left shoulder than how it is in the movie).

One thing I do have to mention is that I hate that the figure’s eyes are always looking towards the right. This makes posing a little harder especially when taking that into consideration. 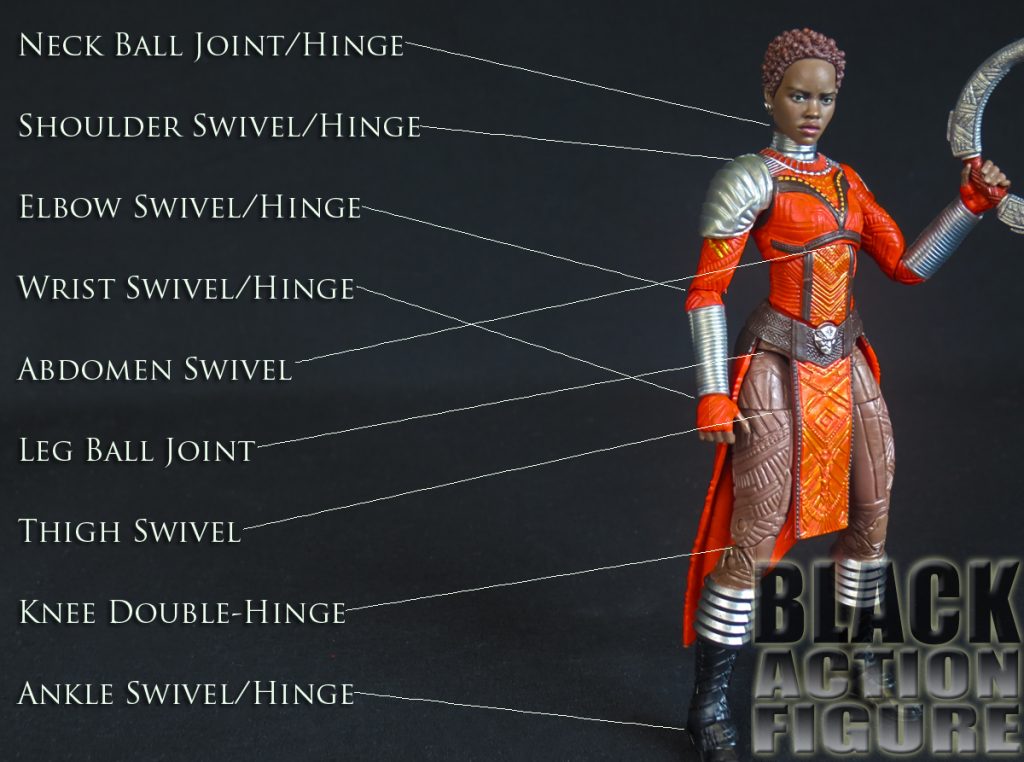 This figure comes with 27+ points of articulation, which is become more and more standard with Marvel Legends female characters. Definitely not as high as her male character counterparts (Black Panther and Killmonger) but very respectful in terms of 6″ figures.

Some negatives include the hampering of the full range of motion for the right shoulder due to the armor piece the figure is wearing.  This figure is also lacking a waist swivel, which is probably mainly due to the outfit.  The abdomen swivel adds some range of motion, but not nearly enough for some of the poses. 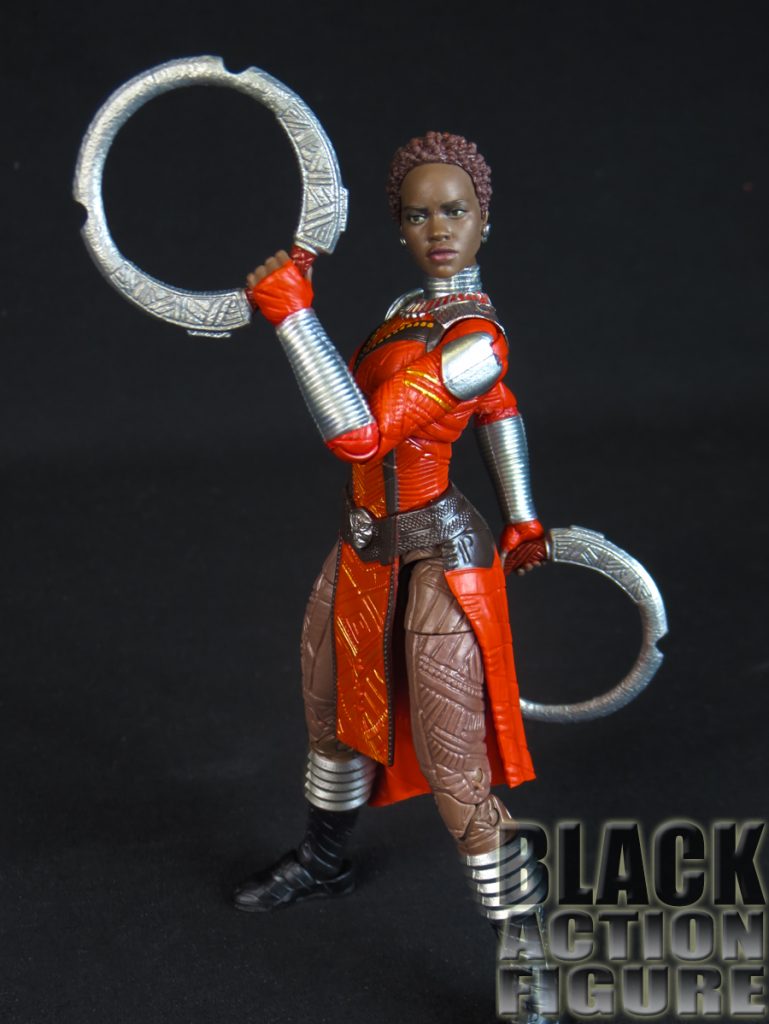 I keep reiterating that this was a $20 figure because you usually don’t see this kind of quality unless you were buying a Japanese figure like the SHFiguarts line or a Mezco figure, and most of those start at $60+. I’m glad to see that Hasbro still likes to up their game in terms of likeness, even when they still make mistakes (have you read my Black Panther review?).

I do have to admit that I have been impressed with Hasbro’s offerings lately in the Black female arena…they do realize there are other characters besides Storm.  Now with the Black Panther movie making obscene amounts of money, you can almost predict Hasbro’s next big move (an army builder pack of Dora Milaje anyone?)

I look forward to getting to that Build-A-Figure. I have the head and it is more fantastic work. Let’s hope that I enjoy that review as much as I enjoyed this one!