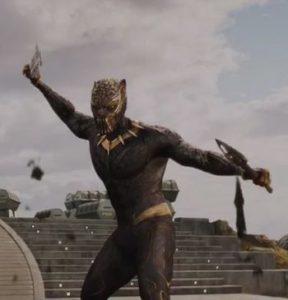 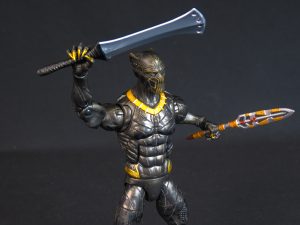 A month and half has passed by, I have seen Black Panther three times, and I am just now getting to my second review…thank you for bearing with me, one day I’ll get to do these more often. Next up with have Erik Killmonger in what the community has unofficially dubbed his “Golden Jaguar” costume. I hope that one day someone (Hasbro, Bandai, etc.) will wise up and come out with his Klaw breakout outfit with the African mask.

In my last review of the Black Panther figure, I wasn’t overly impressed with how that one turned out…especially with the facial likeness of the additional head. Check out the review to see if this one stands out better or suffers the same weaknesses as the first figure. 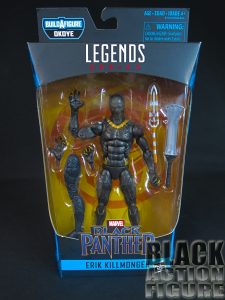 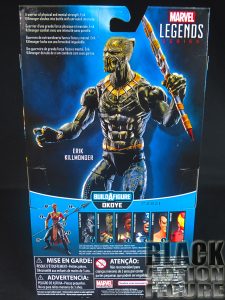 That blue on black just “electrifies” the packaging. Even though I give the same score to most of the Marvel Legends I review in this packaging (to not really favor one over the other), I have been happy to see this color scheme…makes the figures very noticeable on the shelf, similar to last year’s X-Men wave with their Black and Gold packaging.

Even though the general public/internet has dubbed this outfit as the “Golden Jaguar”, he is properly and prominently given the name of “Erik Killmonger” on the front. If you haven’t seen the movie (have I mentioned that I watched it three times and have the Bluray on preorder?)

What does stand out is the weird, stiff pose that they have the figure in on the back. Hasbro usually does the most with their poses, but in this case, it turned out kind of stiff…almost like if I had taken the picture and not a professional photographer. 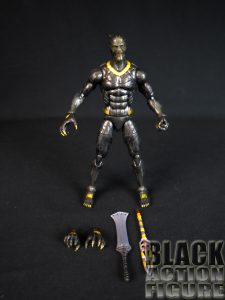 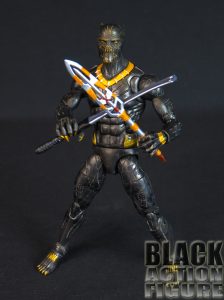 I have to say that I’m almost satisfied with the accessories that come with this figure. Of course you get a Build-A-Figure leg, which I never count as a real accessory. You also get an extra set of hands, a sword, and a spearhead, both weapons that were featured in the movie with Killmonger.  Which is usually all I ask – please include accessories that directly relate back to the character, and this one they did nicely. If I had any complaints about them, it would be that the spearhead seems a little big in relation to the figure. 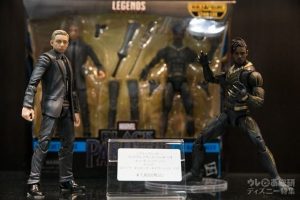 What’s not so nice is that there is a glaring omission…unlike the Black Panther figure, this figure does not come with an additional head with the Michael B. Jordan likeness. What seems like an obvious miss by the likes of Hasbro turns out to be an apparent “cash grab” by the company. How so? They are releasing later this year (maybe around the time the movie is released in stores?) a two pack with Killmonger and CIA Agent Everett Ross and this one not only features a maskless Killmonger head, it also features (in my opinion) a better paint scheme of the figure, giving the figure more golden highlights. Along with the same weapons.

Logically, I would say that if you want this figure, you should wait for this two-pack to show up and get it then. Of course then, you wouldn’t get the Okoye Build-A-Figure part, so this is pretty much Hasbro giving us the middle finger and telling us to suck it up and buy both. 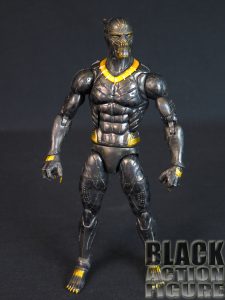 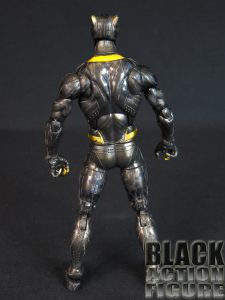 I think I have a similar complaint with the sculpt/likeness as I did with the accessories. While this is nice to have, it seems the figure that will come out later will have a better likeness in addition to a sculpted head that this one just doesn’t come with.

I do have to say that this figure did give me a better idea of how the suit looks. The action in the movie really doesn’t give you a chance to focus on the suit beyond 3 second intervals. I think that this figure in hand is probably so far the best depiction of what I keep missing in the movie (at least until the Hot Toy figure comes out).

This suit is more than how it looked initially when first presented by Shuri in the film. The additional touches do give it a more “jaguar”-like look to it, and does indeed make it more menacing. The golden paint scheme, while seemingly done better on that 2 pack coming later, does also work nicely on this figure.

The weapons have a nice paint scheme as well – I’m happy that Hasbro did not just leave them the same color as the molded plastic. They did well with what they had at the time (since these released at the end of December) and I’m hoping that the extra time they receive until the DVD comes out (May 15) will give them a chance to enhance an already good figure. 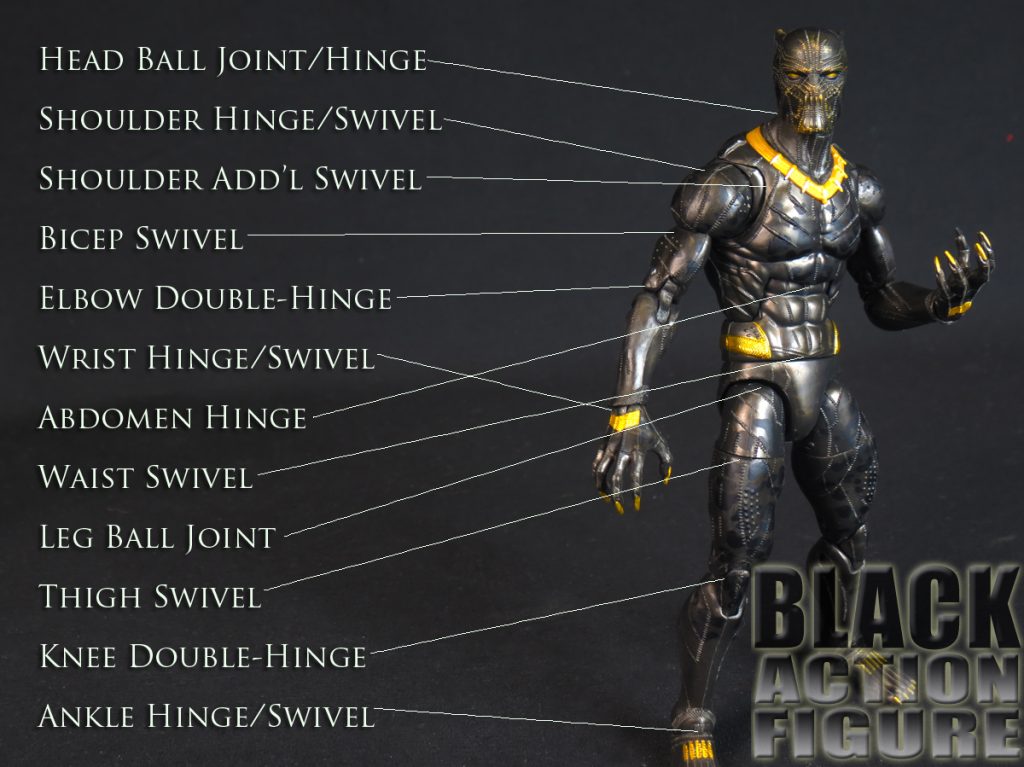 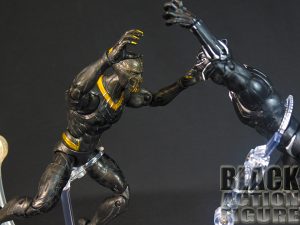 Not only is Killmonger an (almost) equal to T’Challa in the movie, this figure is pretty much has the same articulation scheme as his Black Panther counterpart. We’re looking at about 32+ points of articulation…absolutely insane in action figures these days.

Like the Black Panther figure, I had little to no issues with the figure balance. Standing action poses were not an issue. Leaping attack poses were easily executed. No real complaints on how this figure turned out.

Just as I did in my last review, I do have to mention that I think the only thing that this figure is missing is a shin swivel. That would give more posing power to the bottom portion of the legs instead of the top. But that’s a minor complaint. 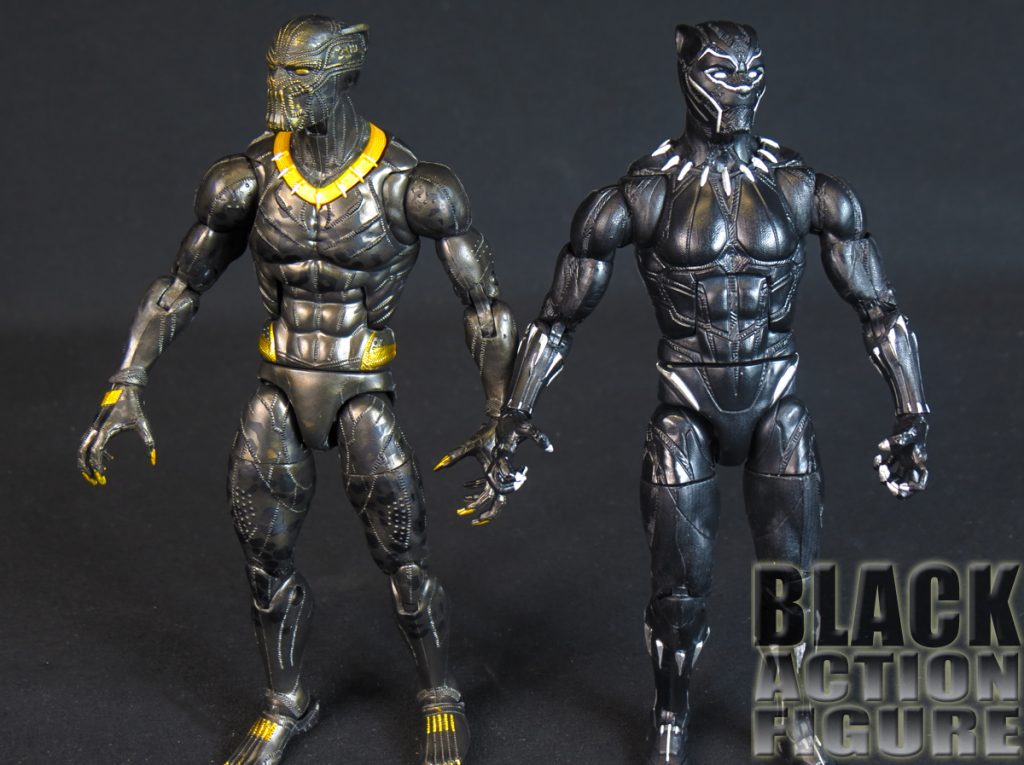 The only reason this reviewed better than the Black Panther figure is because of the accessories. Otherwise, they would have had similar scores in the end.  And in all honesty, if we got a head (accurate likeness or otherwise) this would have been a better scored review. Possibly in the upper 8’s /10.

I do look forward to the other figure, but like I mentioned in the intro, what I want is the outfit he wore (along with mask) when he broke Klaw out of detainment.  That one was more unique and in my opinion more collectible than just getting a Black Panther “clone”.

At any rate, I checked this one review off my list.  This review has been sitting in my “to do” pile for over a month.  I still have about 6 more reviews to do on Black Panther before moving on. Wish me luck.