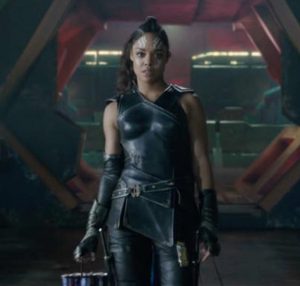 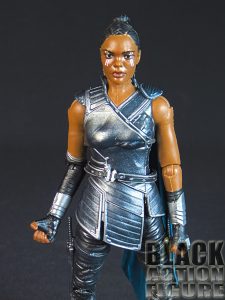 When they first announced Thor 3, I was not holding my breath. The first two iterations of Thor had been good enough to watch, but easily forgettable in the long run. When they announced Thor: Ragnarok and put out the teaser trailer, Marvel easily regained my attention and got me excited again for a Thor movie.

I thought they had a good formula already….Thor with the Hulk and Loki, with Hela as the villain. But there was at least one more surprise – they brought in Tessa Thompson to play Valkyrie! Tessa is most known for her work in “Dear White People,” “Selma,” “Creed,” and most recently in “Westworld.” But with this announcement, I knew the next was inevitable – the announcement of Tessa Thompson action figures!

This time around, we get the Hasbro Marvel Legends figure not only as a Target exclusive, but also in a two-pack along with a Chris Hemsworth Thor.  Just to gripe for a minute, it’s bad enough that it was an exclusive (since this is a major character in the film) but then they went and made it a two pack of a slightly different build of Thor…the one they already included in the Thor: Ragnarok Marvel Legends Wave (This time with no helmet). Hasbro sometimes knows how to piss off a collector.

Anyway, I finally got my hands on it…so how did it rate? Check out the review… 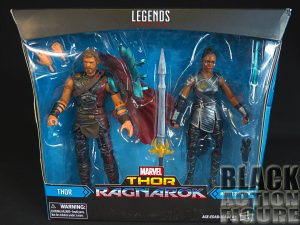 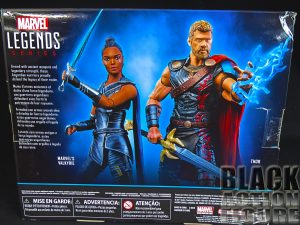 I ordered mine online from Target.com as soon as it became available…and as soon as I got it I almost instantly regretted it.

For one thing, it was openly released in the store at the same time. I was in Target yesterday and they had ten on the shelf.

Secondly, you get whatever they send to you, and sometimes the quality is questionable in terms of packaging and figures.  Case in point, the corners of my packaging were all dented and banged up. But that wasn’t the worse of it…If you look on the picture of the back packaging, you may notice that the tape on the right has been tampered with. That instantly raised my suspicions.

I turned the packaging around and noticed that where there should have been a lightning accessory for Thor, someone had opened the package and replaced it with some other random accessory. Understand that I ORDERED THIS from what I assume was a Target.com warehouse…so someone took the time to open this up and take the lightning and seal it back up to be sent out to an unexpected consumer (me in this case). Completely pissed off.

Fortunately, this kind of has nothing to do with the Valkyrie figure directly, outside of receiving a slightly used (opened) package as new.  Needless to say when I’m done typing this, I will go to Target and exchange this for one with the correct accessories and better packaging. So if you are to purchase this set, get it from the store, you’ll stress less… 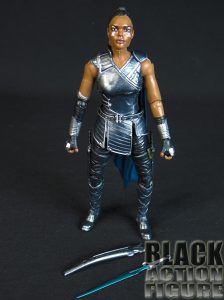 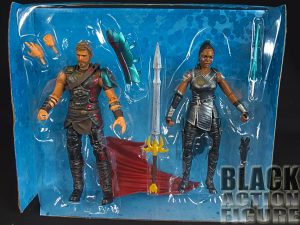 Okay, I’ve already complained about the missing accessory, right?  Aiight, enough about that then…

Just focusing on the Valkyrie figure, it comes with….*drumroll*….a sword and a sheath. That’s it.

I better not see this movie over the weekend and see all sorts of accessories they could have included with this figure. This is almost irresponsible of them.

To make matters worse, I have no idea of where to put the sheath. A quick Google search of other reviewers found that everyone else is having the same problem as well. People have succumb to putting the sheath in the belt, but that feels awkward at best.

And to even add to that, while the sword itself look nice, the sword and sheath are made up of that super soft plastic that bends backwards if you just look at it funny. That’s one of my issues with Hasbro (review aside, there are really not that many) – Hasbro tends to use this soft plastic to seemingly save them from a lawsuit. Even though these figures were generally made for an adult collector, some 4 year old kid is going to poke their eye out with them, so they make these soft plastic weapons to alleviate that situation.

Another complaint? What is the deal with Hasbro and the non-removable weapons? They have been doing a lot of that lately. Here we have two daggers on the sides which cannot be removed. To me this is another indication that this was a rush job.

Circling back to the sword, it looks nice and goes in easily in the figure’s hand(s), but does not fit tightly…so it often rotates around or hangs limply from the hand. Another minus. It all kind of feels like a rush job by Hasbro. 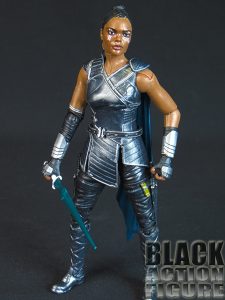 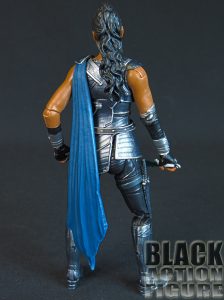 From my understanding, Hasbro has this new process which creates a 3D mapping of an actor’s face and use it to create more accurate figures.  And it is in my honest opinion that it has improved these figures 1000 times over. (Remember the Jamie Foxx Electro in the Marvel Legends line? You know the one that completely looks nothing like Jamie Foxx?)

I had my doubts from looking at some of the prototypes, but once in hand, it was obvious that this was indeed Tessa Thompson. And the outfit and weapons look like they do in screenshots.  So the likeness is on point. I just wish there was more expression on the face. The expression really falls flat. A hint of a smile would have done wonders.

What about the sculpting? Technically, it looks nice and accurate (the back of the figure with the hair and the cape are pretty impressive), but when you get in close, you can see how sloppy this figure looks and feels. There are paint droplets and ruboffs all over. And there are places where you can see the seams of where the plastic is molded. My warpaint on the face came out okay, but I have heard stories where it was crooked or simply not there. So a little sketchy in that department.

Again, it feels like Hasbro rushed to get this one out. A little more time would have probably given us a near perfect figure…makes me want the Hot Toy version even more… 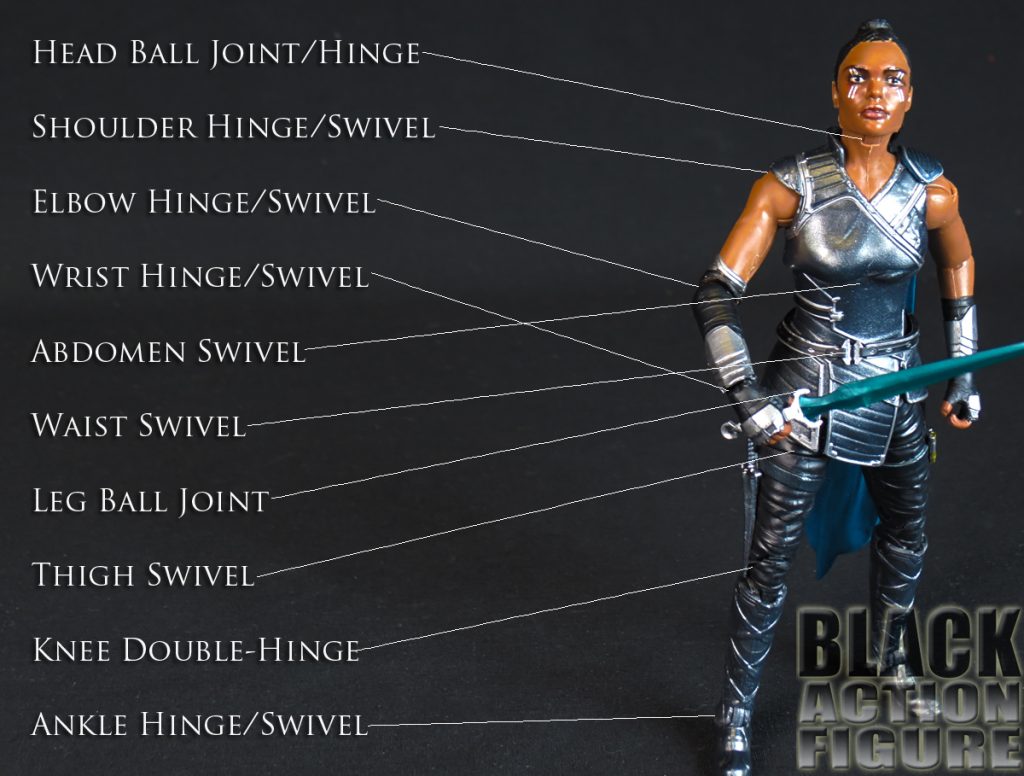 Have to say, pretty impressed with 28+ points of articulation. Hasbro’s female figures are good, but usually never compare this close in terms of articulation to their male counterparts. This one does and surpasses many in some cases. Of course there are issues though.

First off, let me say that the hinged neck is the best thing that has come to action figure necks. Even with the sculpted hair, this figure is able to look up and down with ease.

What I really don’t like about this figure are the elbows. While Hasbro has probably given us the best possible articulation for these skinnier arms, I do miss the double-hinged elbows which would give this figure a wider range of arm articulation.

Can’t think of too much more. I’m impressed and pleased. 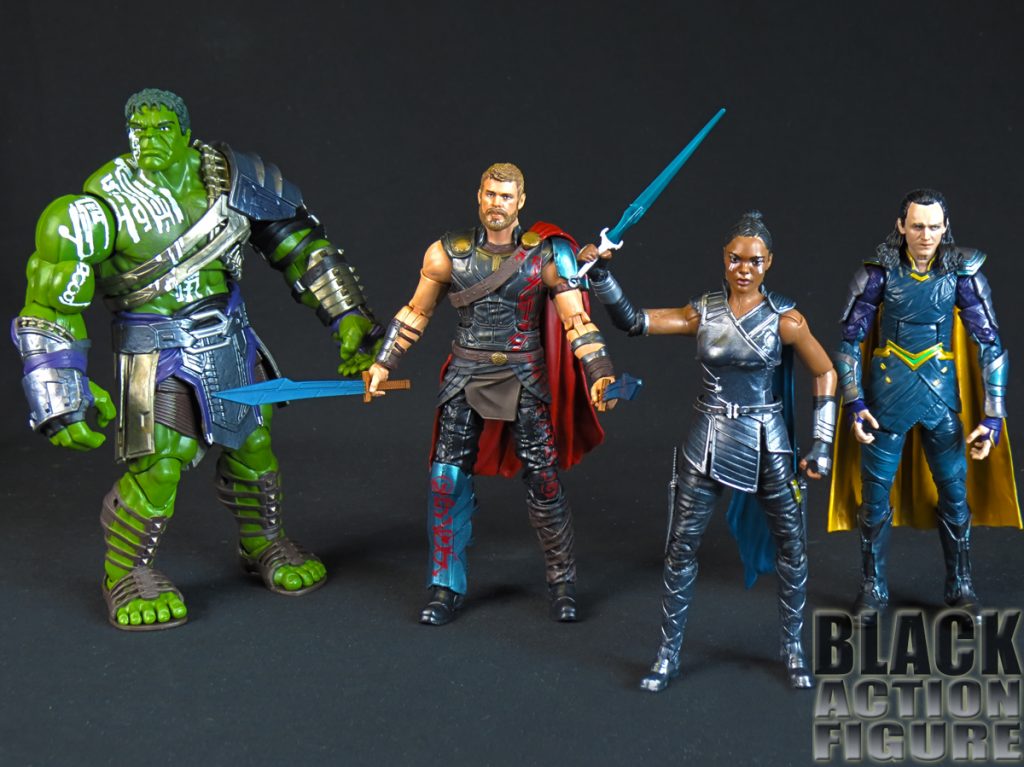 I am pretty excited to see “Thor: Ragnarok” this weekend…and Tessa Thompson is one of the reasons why. Which is why I’m going to pick up whatever figures I can get my hands on. It’s not very often we get a strong, Black, female superhero (goddess?).

Yes, we have to go through that whole “Valkyrie is White in the comic books” *whine whine bitch bitch moan moan* from the trolls out there.  We did that already when Idris Elba played Heimdall. I could go into how fifty years ago when these characters were created and drawn it was a different time, but I really don’t have time for that.

Just go to the movie, sit back, and enjoy a fictional tale of gods, goddesses, monsters and superheroes…why sweat the small shit?

This figure is available now at Targets (US) everywhere…. 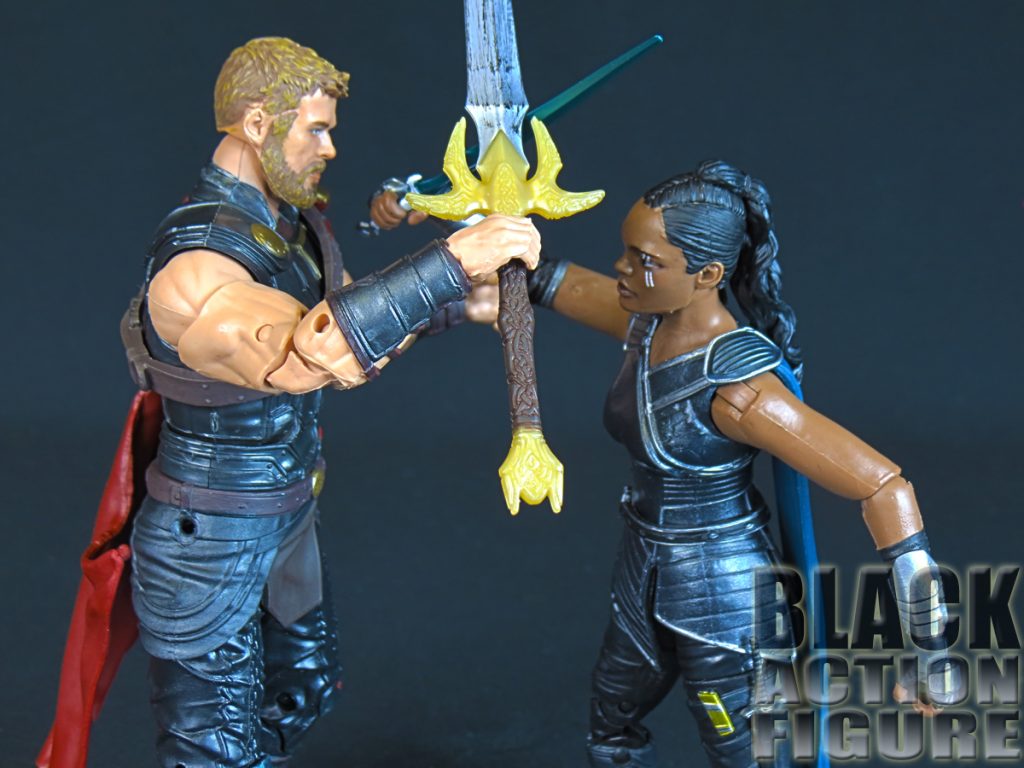 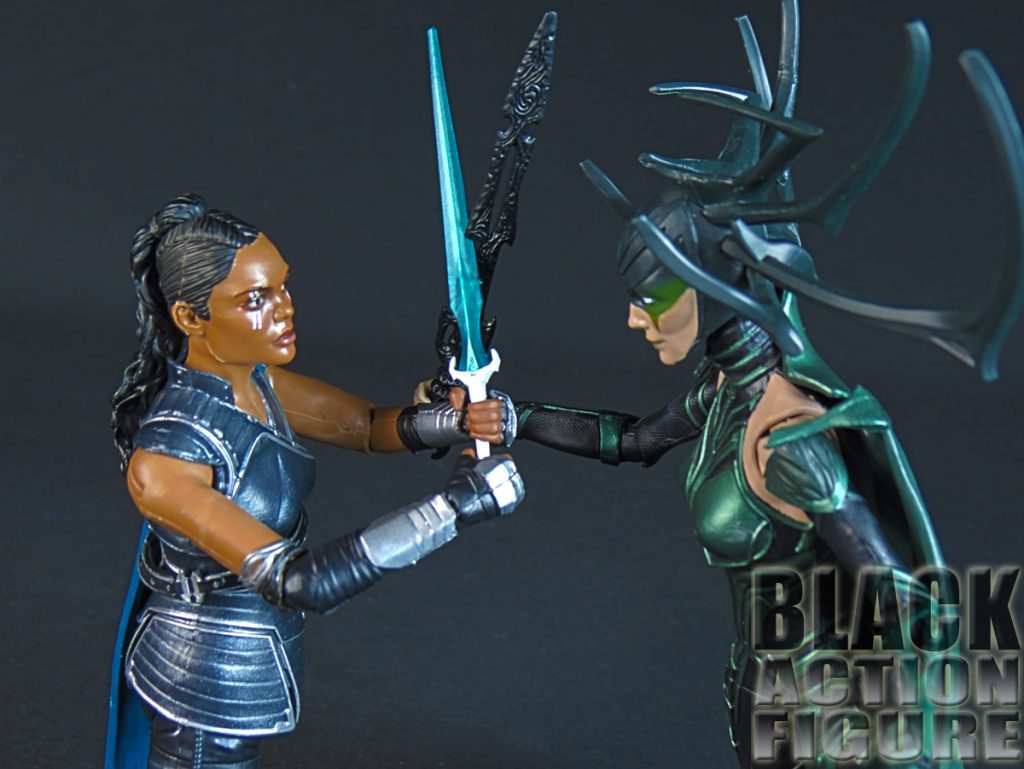