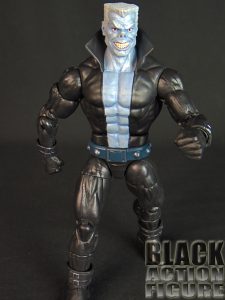 Born in Harlem, New York, Lonnie Lincoln was bullied as a youth since he was born albino with a pig-like nose.  In turn, he bullied and extorted the only person to show him an ounce of compassion in a twisted form of what he thought of as friendship, Robbie Robertson.  Robertson moved on to later become the editor-in-chief of the Daily Bugle. Lincoln went on to continue his life of crime and ultimately became the crimelord known as Tombstone. Although already naturally strong, an accident hardened his skin to stone and increased his strength giving him more credence to the name “Tombstone”.

Tombstone was a villain I loved to hate when he was first introduced. His criminal activity and relationship to Robbie Robertson had Tombstone cross paths with many superheroes, but most notably Spider-Man.

I was actually a little depressed and surprised that they made an action figure of his daughter, Janice Lincoln aka The [Female] Beetle, before they made him.  Tombstone has been a regular fixture in Marvel comic books for nearly 30 years. I was extremely excited that we finally got a decent Marvel Legends Tombstone action figure almost a year later. Will this Tombstone figure be a prominent part of Spider-Man’s already huge Rogue’s gallery? Does this figure live up to the wait? Let’s check out the review… 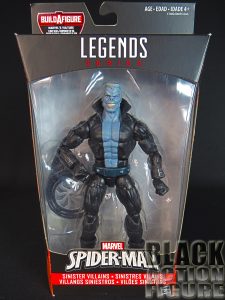 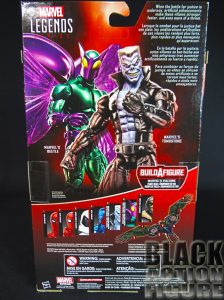 While not the biggest Marvel Legends packaged figure, this Tombstone action figure is a bigger sculpt than most. I am very happy that this basic packaging can handle such a wide variety of figure sizes. There have been a couple of instances where there have been packaged figures as big as the “Build-A-Figure” itself.

That’s pretty much all new I have to say about the packaging. As always, it continues to be the staple of Marvel Legends figures for the last few years, which has been perfectly fine with me. I don’t see the packaging getting too much better than this down the line.

To note, Tombstone ironically shares the back picture with the original Beetle. Ironic since his daughter is the current Beetle. Other than that and being Spider-Man villains, I don’t think there is anything else really connecting the two. 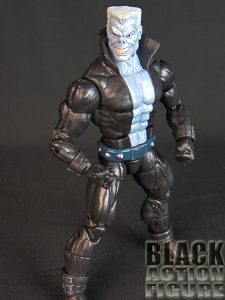 It took me a while to figure out why I didn’t do an accessories shot…it was because there were none.  It would have been nice if Tombstone came with maybe an alternate head, or even a real tombstone or something along those lines.

Instead, all we get with the figure is the last Build-A-Figure piece (at least for me) of the gigantic set of wings for the movie-based Vulture figure. And those wings are pretty damn big. They make Falcon’s wings look like gnat wings. But I digress.

So nothing to show hear except the figure.

Let’s hit likeness first. Since this is based off the comic-book version of him (as opposed to various animated iterations), I think this is as close to likeness as we will get. The overall look is Tombstone.

The head sculpt is really good, from his flat top to his pig-shaped nose and down again to his self-sharpened shark-like teeth. This is a great representation.  He was rightfully put on a larger action figure buck, but not the largest Hasbro makes, so that feels about right.

Now let’s talk technicalities. His “shirt” or open top to his outfit feels painted on, I guess to give it the feeling like it’s skin tight but open in the middle. While this is somewhat comic-accurate, it comes off a little too “J-Lo in the Green Dress” than crime kingpin.  There is a slight ridge on the edge to signify that it is supposed to be clothing, but it all falls flat.

And I don’t know what’s going on with Hasbro lately, but them not gluing down accessories is getting old quickly. Both the wrist cuffs and the boot cuffs (ankle holsters?) are loose and free-moving. This has been Hasbro’s M.O. lately, with large complaints coming from figures like their recent Jim Lee Cyclops figure. A spot of superglue goes a long way. Just sayin’.

Good sculpt. Will fit in nicely with the rogue’s gallery, but nothing that will stand out. 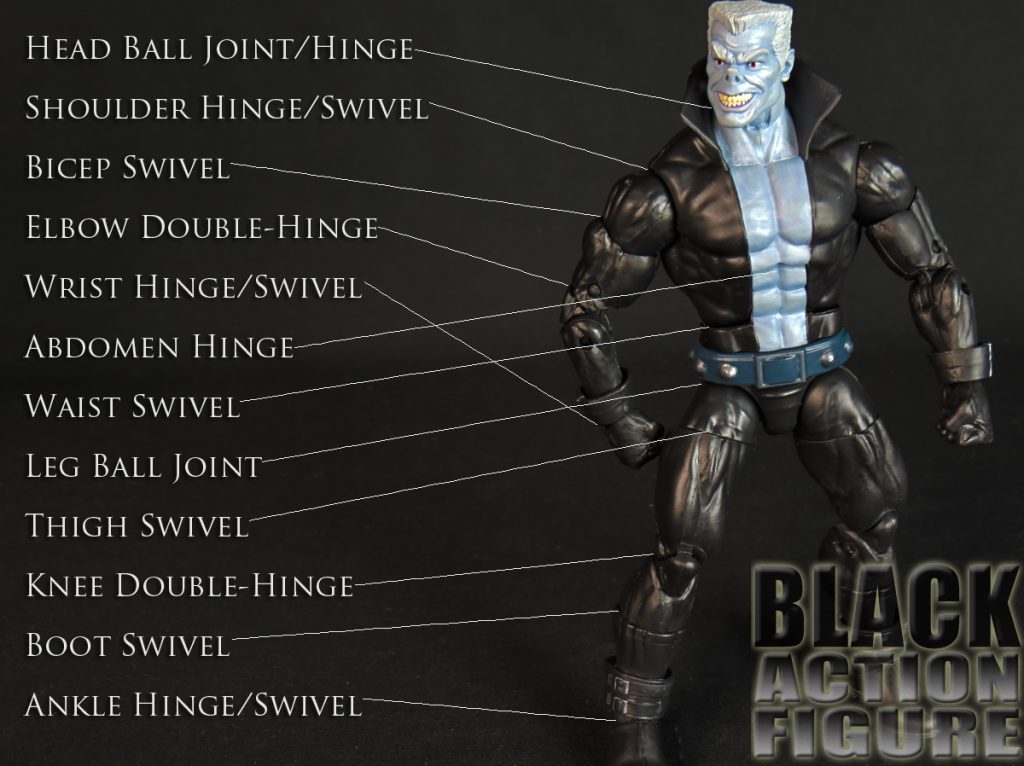 Clocking in at over 31+ points of articulation, this action figure is the reason I love Marvel Legends…the articulation is where other companies (namely Mattel and DC Collectibles) need to be at and just seem to fail.

Take note, I had to look to see if the figure had a hinge on the neck, which it does allowing the head to have a good range of “looking down”. Looking up seems to be more of an issue because it is hampered by the huge, upturned, butterfly collar the figure is rocking.

The joints felt a little loose at times for my liking, but I was still able to put it through a number of poses and make it stand with little effort.

Nothing really more to find issue in. Solid articulation on this figure. 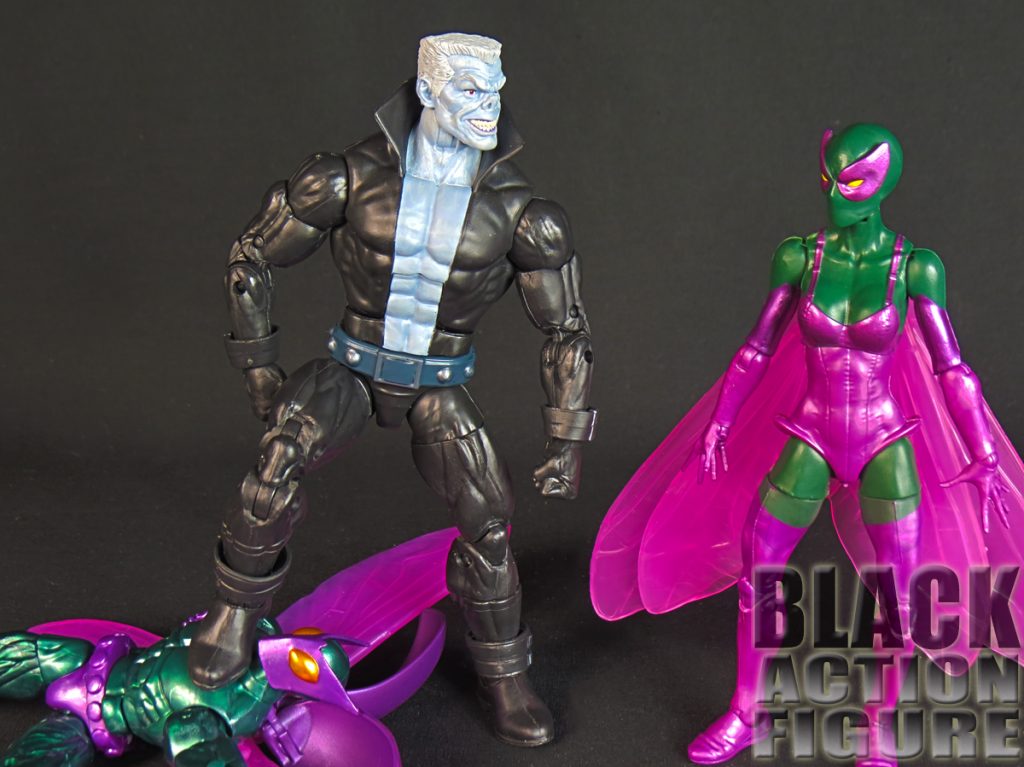 I honestly don’t think we have had a Tombstone figure since the Toy Biz days and I definitely don’t think we’ve had a good one until now. This one has it’s issues but overall it’s a decent figure.

I have already had a couple of fans that reached out to me to let me know that they didn’t know that Tombstone was Black. It’s not widely known, unless you have been reading comic books for over 30 years (since his debut). I think the only one I have seen to even get close to getting him right is The Spectacular Spider-Man where Tombstone not only has a bunch of Black henchmen, but is voiced by the impeccable Keith David (Spawn Animated).  That dude is so damn awesome and rocked it out as Tombstone and is actually the voice I hear in my head when I read him in the comic book.

Enough has been said how it has been troubling how he came out after his daughter, but maybe it was just a scheduling thing. At any rate, I’m glad to add him into my collection and look forward to Hasbro offering more obscure characters that no one outside hardcore collectors would even know about (looking at you Ex Nihilo).