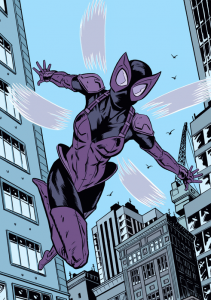 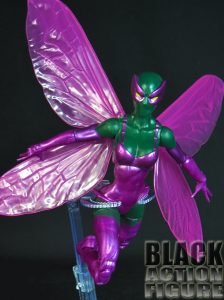 I have a crazy backlist of action figures to review and sometimes you just have to sit down and go through them no matter what. So next up is one of the Superior Foes of Spider-Man herself, the Beetle.

Now how does the Beetle make it onto “Black Action Figure?” Well, first off, I don’t discriminate and you can be Black, Brown, Yellow, Blue, or whatever, as long as I like the figure, it’s being reviewed.  But for real tho’, the Beetle is Black. Janice Lincoln, aka The Beetle, is actually the daughter of Black albino supervillain, Tombstone. While they never really truly indicated what race or nationality her mother was, as President Obama would attest to, Tombstone was enough to make her Black.

Still a relatively unknown character in the comic book world (being around 3 years old now) we are blessed with an action figure representative. So how does it rate? Check it out… 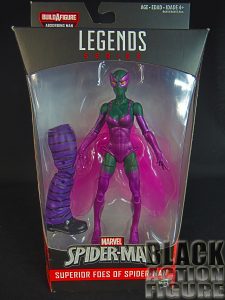 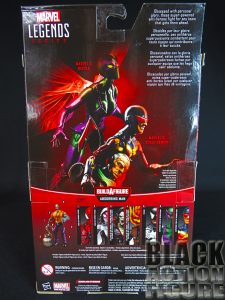 This is how behind I am. This figure came out more than a year and half ago and I’m just now getting to it.

Nothing out of the ordinary about the packaging. Normal Hasbro Marvel Legends packaging so I usually give it my default score.

On the back we get a look at the “Absorbing Man” wave which featured some good figures. The Beetle and Speed Demon are relative unknowns and were made notorious from their comic title, “The Superior Foes of Spider-Man.”

At any rate, the packaging is going into the trash, so unless you’re a mint-on-card collector, just expect to open and toss the packaging. 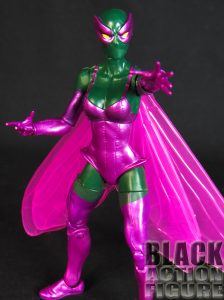 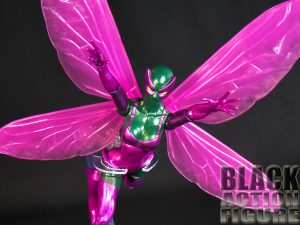 The only accessory (that is not a Build-A-Figure piece) that came with this figure are a set of articulated wings.

In the normal fashion of Hasbro re-use, these wings were first seen on the Marvel Legends Wasp figure a few years back. They have now been molded in a pinkish translucent plastic and reused for this figure.

While the wings themselves usually stay in their little peg holes, numerous amounts of posing had either the wings fall off of the figure’s back or just come apart altogether. While easy to snap back together, there could have been some more approvements made to them to better stay on this figure.

No other accessory…an extra maskless head would have been nice for this figure. 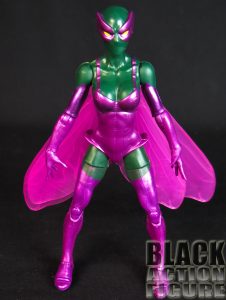 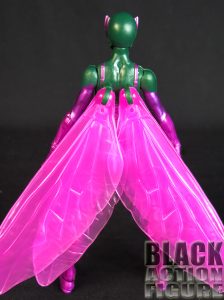 While colors on these action figures sometimes seems to be a little too vibrant as compared to their comic book counterparts, I think this figure is a fairly accurate representation. The green mixed with the magenta/purple is a common “supervillain” color scheme (Doctor Doom, Lex Luthor, Green Goblin, etc.).

The sculpt is ultimately okay with this figure. The reuse of the Marvel Legends Wasp wings is a little too obvious and I’m not sure if it adds or takes away from it.

The eyes are sometimes drawn bigger although that can always vary depending on the artist.

Other than those nitpicks, the sculpt is nice and accurate and the paint, while a little basic, is clean and even. 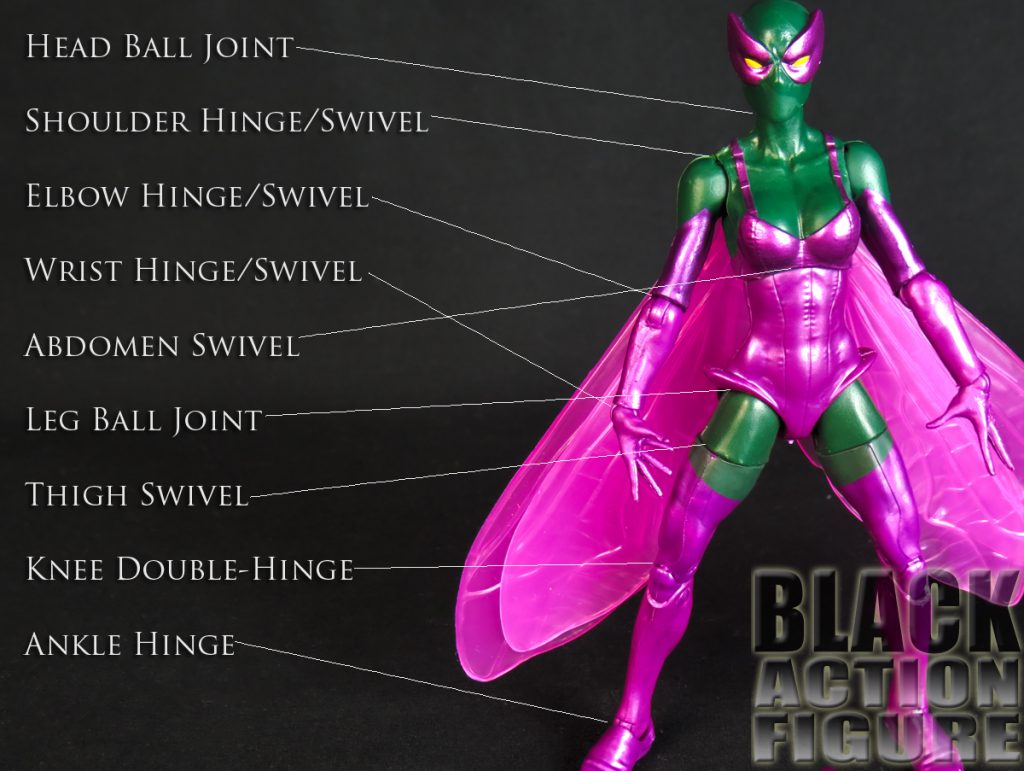 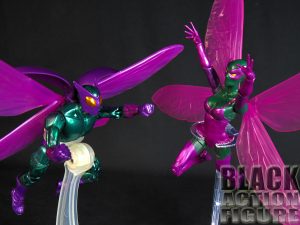 Not counting the wings, there are just 24+ points of articulation on this figure. In retrospect, this is kind of middling for a Marvel Legends figure.

Of course there are some misses with the articulation. Like most Marvel Legends female figures, this one does not have a waist swivel like the male figures, depending more on the abdomen swivel instead.  Also, you know I like total head articulation especially with “flying” characters, and this does not have it…the figure is unable to articulate its head back or forwards. The shoulders are also awkward and can not fully articulate the arms in an “up” position.

Besides those gripes, I am actually able to place this figure in some cool poses, but I believe the articulated wings helped save this figure. 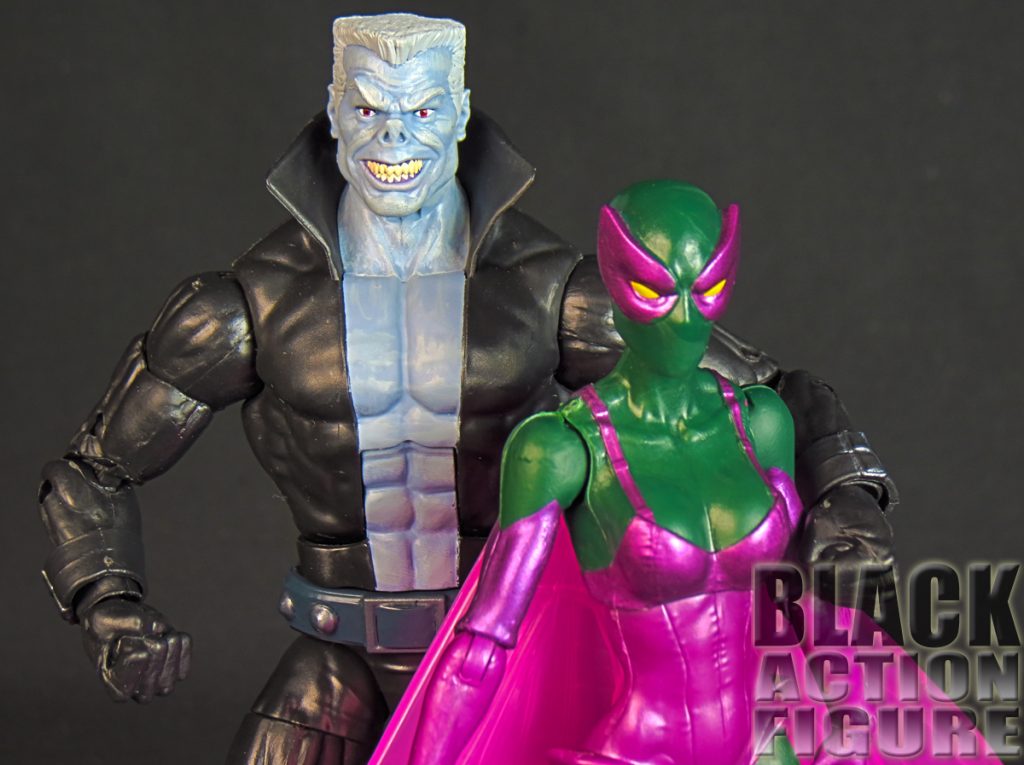 I almost didn’t review this figure…I sat on it for a long time while I reviewed other figures. I think one of the reasons I didn’t do so is because of the lack of a Tombstone figure…which Hasbro rectified this year in one of their many waves (seriously, I have like three waves I haven’t even opened yet).

I’m glad I got a chance to finally review this figure, but I’m really kind of over it. I needed to give my Absorbing Man his leg and I needed to get this figure out of the pile I have stored up. It’s done and now I can move on…to the Tombstone figure that I went ahead and took pictures of since I was doing this one. I mean, they are father and daughter, how could I not do them at the same time?