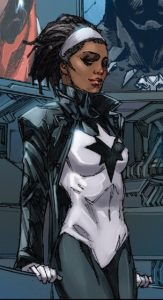 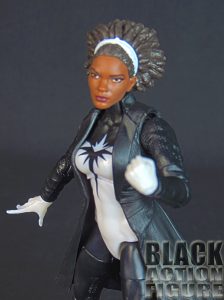 Spectrum…Photon…Pulsar…Captain Marvel…Monica Rambeau. This character has gone by many names in the last 35 years, but one thing she has not been called is an action figure…until now. Marvel and Hasbro has finally gotten a clue and has created an action figure for a character that has gone through 4 different names (including their namesake, Captain Marvel), a billion different hairstyles and costumes and has finally gotten some of the limelight she deserves.

When Hasbro first announced a Monica Rambeau/Spectrum action figure, I was excited. Then I got depressed because I learned it was going to be an SDCC 2017 exclusive. Then I got a little more hope when I learned it was going to be a Toys R Us SDCC exclusive – every Toys R Us exclusive has been made available to me at some point.  When I missed the original preorder on Toys R Us site, I was a little deflated, but I knew it would be back. After awhile, I was able to pick one up and it is even now available in select stores at a discounted price!

After all of that drama, did this Spectrum figure meet my expectations? Let’s check out the review… 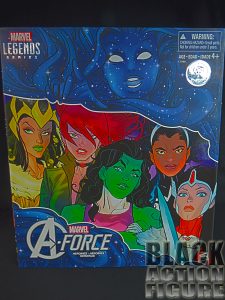 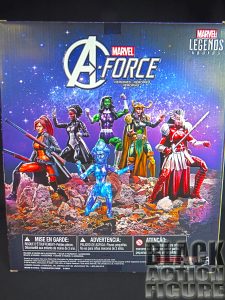 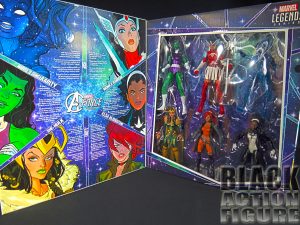 The packaging is actually kind of crazy big, but it has to be to house six new figures…which if you think about it is almost a full Marvel Legends wave (minus the Build-A-Figure). In actuality, I don’t think Marvel has ever put more than two female characters in a Marvel Legends wave (please correct me if I’m wrong) so having six brand new FEMALE Marvel Legend figures is a big deal, and what’s even a bigger deal is that one of them has long deserved to be an action figure.

Anyway, great packaging and a break from the normal Marvel Legends packaging. I would say that as a downside, it is a little big and cumbersome, which could lead to storage issues. 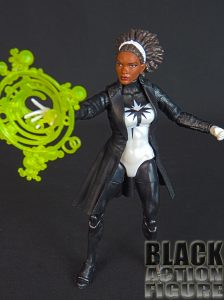 Quick section…while some of the figures like Sif and Elsa Bloodstone come with weapon accessories, Spectrum, who is an energy based superhero comes with exactly…none. Which is surprising because it seems that Hasbro have been packing every color of energy blasts with all of their magic-wielding and energy based superheroes…you would have thought it would be easy to pack one or two of those in.

Luckily, I had a Polaris figure just sitting around and one re-accessorizing later, Spectrum now has an energy blast.  I know I probably have one or two packed away somewhere that I won’t use, so sooner or later, this figure will be displayed with an energy blast.

However, I had to supply my own blast for this photo shoot and review, so with no accessories, I will give 2 points for having such a cool, kind of non-removable trench coat as kind of an anti-accessory. 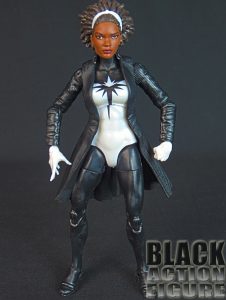 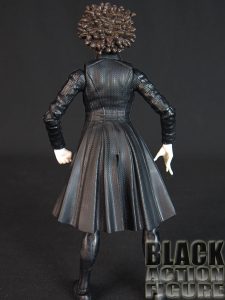 I am actually pretty pleased with the sculpting of this figure when compared to the character’s likeness in the comics. Well done on the translation from page to “3D” model. Many props go to the sculpting of the ‘locks, but we know Marvel has had practice when making Brother Voodoo, so this is just another great effort.

There are a few misses in terms of paint. While most of the paint application looks decent, there are some spots where the sloppiness has caused one or two spots. Since I ordered this online, I did not get to pick which figure I thought was the best painted, so I have to live with the mistakes. Another thing that they did not get quite right are the painted eyes. They are not as bad and noticeable as the eyes on the Misty Knight figure, but they are drawn on slightly crooked to one another.

Like I mentioned before, the likeness is pretty spot on, but I did notice something that I didn’t notice before today…it seems that different artists have drawn Spectrum to have different variations of her costume. In some pictures you will see Spectrum’s costume design have many points on the starburst in the center. Some variations you may see fewer points. I think what we see here is fairly accurate to what most draw in the comic, so no taking away points for that. 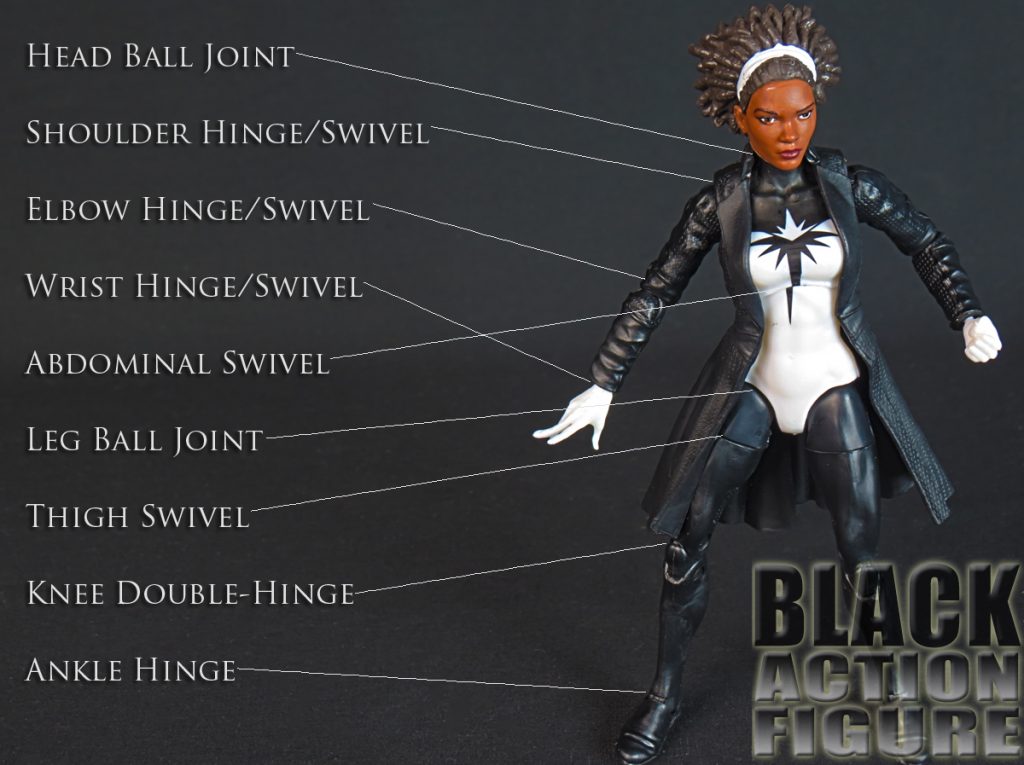 I love the freedom of the double-hinged knees and hinged wrists…makes for some good poses. It always reminds me why I like Hasbro figures over Mattel and DC Collectibles. They make it look so easy! 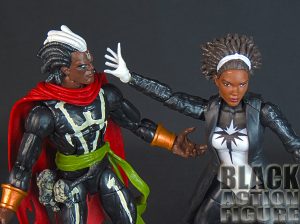 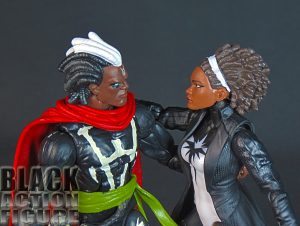 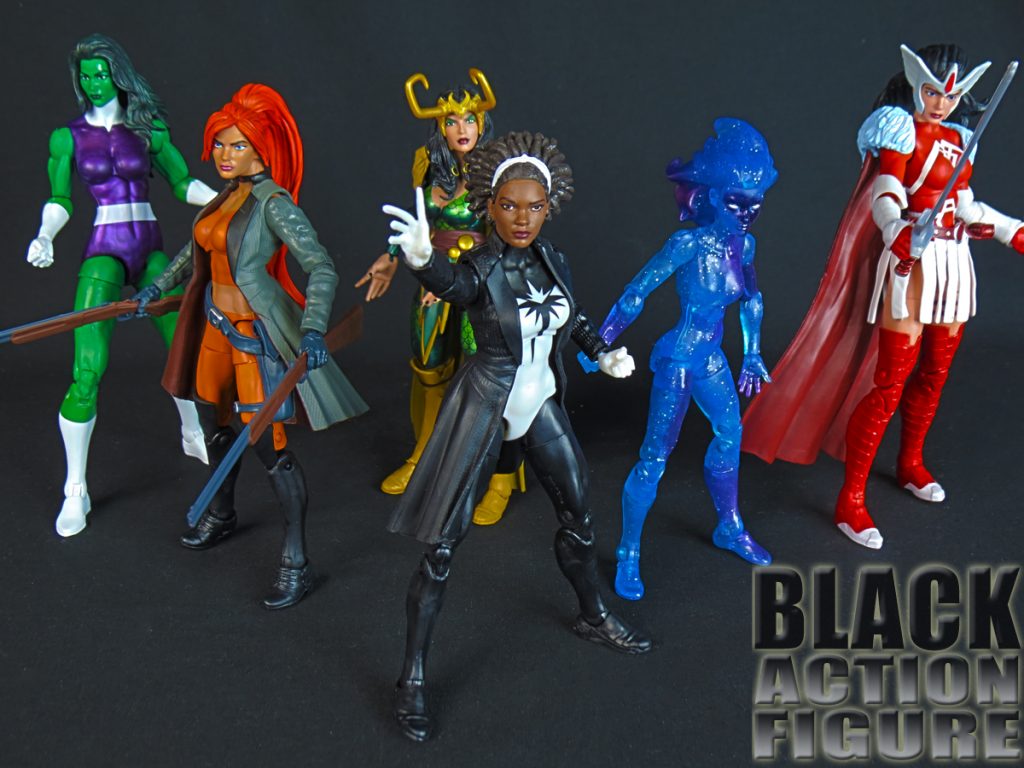 Honestly, I was pretty indifferent about this figure, even though I had a high anticipation for it. I can’t believe it took someone 35 years to put out a figure, but I guess better late than never…I guess.

I now need to dig in my box and pull out the rest of the Mighty Avengers…at least the ones they have made I own. Let’s see…Spectrum and She-Hulk with this box set, Luke Cage, Blade, White Tiger…almost there! Need an updated Falcon figure and…BLUE MARVEL! When the hell is that figure coming out? They have made three or more Sentry action figures but we can’t get one Blue Marvel figures, aka the man who knocked Sentry out?!

Back to Spectrum. I’m really glad this figure was made. It is a great addition to the growing number of Marvel figures and to the Black Action Figure website.