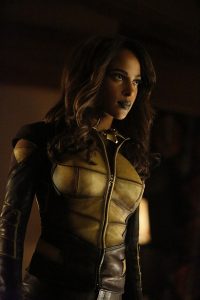 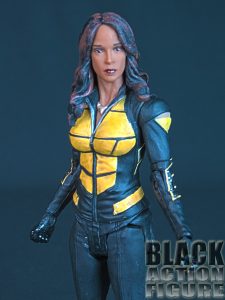 Always have to show love to the female figures of color, even though they are far and few between. And honestly, sometimes a little repetitive. I love the fact that with Marvel and Hasbro, we get all types of figures like Tombstone and Misty Knight. With DC and Mattel (or DC Collectibles) we get ten different versions of the same characters…John Stewart Green Lantern, Cyborg, and now Vixen.

This time around, we get Vixen from TV’s “Arrowverse,” portrayed first by actress Megalyn Echikunwoke. Echikunwoke portrays the Vixen in the Arrowverse present, and not the time-jumping Vixen portrayed by actress Maisie Richardson-Sellers in the “DC Legends of Tomorrow” series. I don’t think I have any of the DC Collectibles Arrow figures so I’m hoping for the best…let’s check out the review to see how she did… 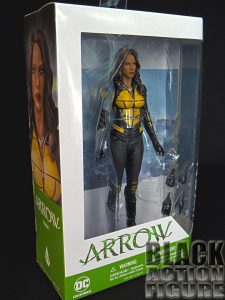 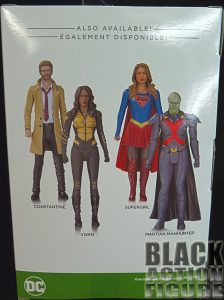 I had to go back and take a look at what I gave the Static packaging, which turns out to have been an 8/10. While the form is essentially the same, I think I’m thrown off by a couple of things.

While the overall design is great and way better than their last packaging scheme, something is throwing it off. I think the one thing is the city background behind the figure. Doesn’t seem to belong. The other thing are the “Also Available” figures on the back. They are just lined up there. Any middle-school graphic designer could have done that. I take that back. They would have done better than this.

Whoever did the particulars on this package design has just bored me to death, and has also taken points away from their potential starting score. 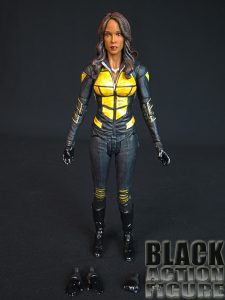 Fairly easy…and disappointing…section; this figure only came with two extra set of hands: a closed-fist set, and an open-palm set. Very limited in comparison to what bigger companies like Hasbro is doing.

DC Collectibles could have easily made animal accessories to illustrate the character’s power. In the show, when she calls on the power of an animal, we briefly see which animal’s strength and talents she’s about to take right before she goes into battle. With that in mind, DC Collectibles could have provided us with a couple of semi-transparent animals like the bear and/or the tiger. Those would have been some nice accessories.

Unfortunately this is not the case, so all we get is a basic-ass figure with some basic-ass interchangeable hands. DC Collectibles is just looking real basic right now. 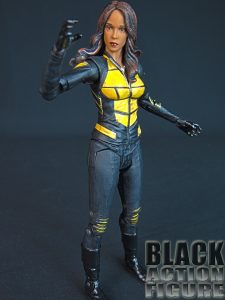 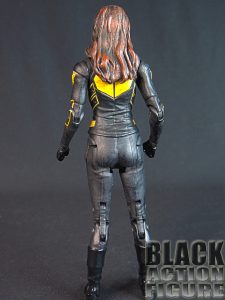 While the female sculpt is nice, I firstly want to say that this figure barely resembles actress Maisie Richardson-Sellers.  This figure captures the core of the actress, but when implemented, falls really flat.

The sculpt and paint on the body is great and accurate to what we have seen on the show. I even like the highlights in the hair.

Where the sculpting breaks down to me is in the facial area. I just don’t see the resemblance to the actress and I’m lost looking at a rather bland figure.

Speaking of bland, what is this supremely bored look on the figures face. The lack of expression affects the whole tone of the action figure, especially the posing. You will most likely see most of my pictures lacks a real fighting pose…and it is most likely because this figure just doesn’t support it. I wish we just saw a hint of emotion in this figure.

And the extra hands? Whack as hell. these did not lend to the overall figure. I almost wish they did not include them, but if they didn’t, this figure wouldn’t have much to say or talk about in terms of accessories. 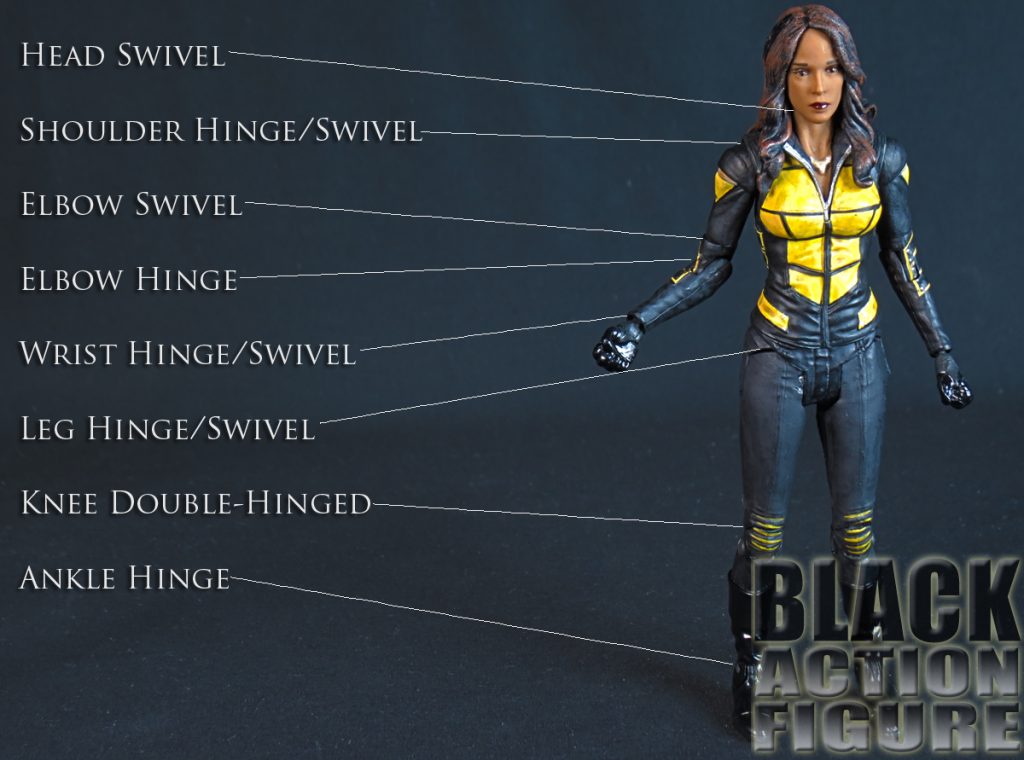 This 6.5″ scale figure has a pretty disarming 23 points of articulation. Just when I think DC Collectibles is going to be better with adding more articulation on their figures, they pull this shit. And to make matters work, some of the articulation is unable to achieve their full range of motion. For example, the legs kick back and forth, but only go so far. Pretty unacceptable.

When you do find an action-worthy pose, the whole moment is pretty much ruined by the bland-ass expression on the figure’s face. You can’t have the figure leaping at someone looking like they’re suicidally depressed… 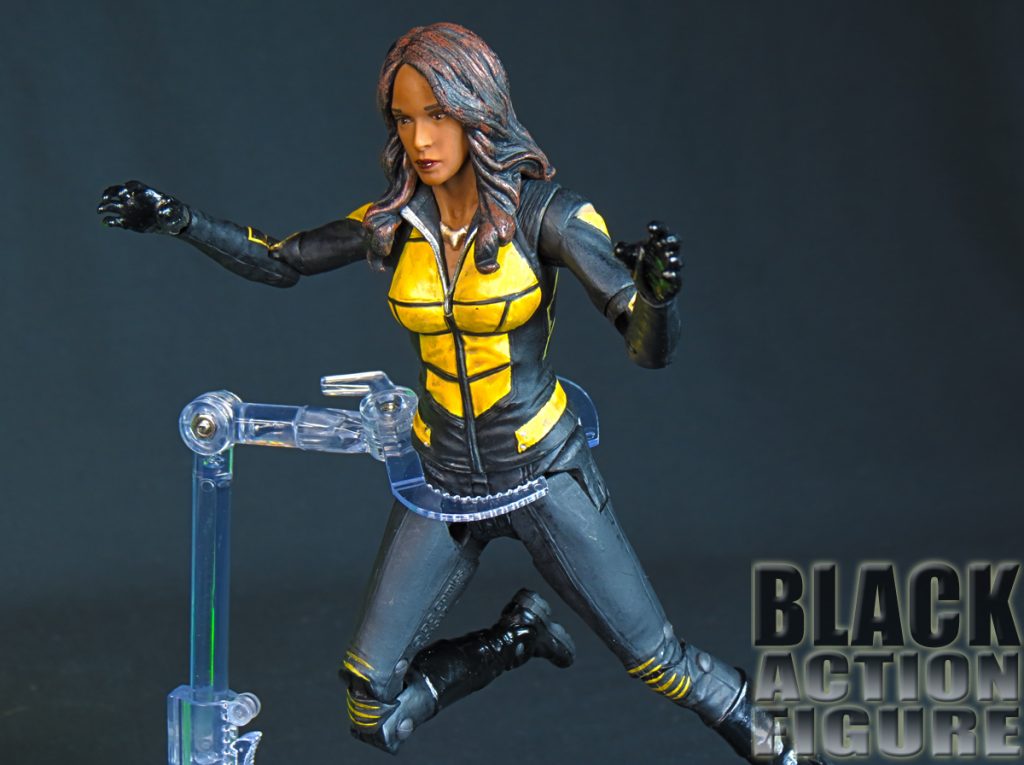 I hate getting my hopes up for these figures only to be let down in some type of way.  Vixen represents some of that frustration. DC Collectibles had their chance to shine with this line, and fell way short.

I had to take a look to see when I ordered this and was a little surprised that this was pre-ordered over a year ago…meaning DC Collectibles had just under a year to get their stuff straight…but then they go and create this near disaster.

I’m really cheering for DC Collectibles. Not only to produce better action figures, but to diversify their offerings. Let’s hope they listen.