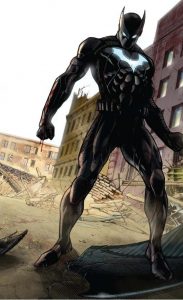 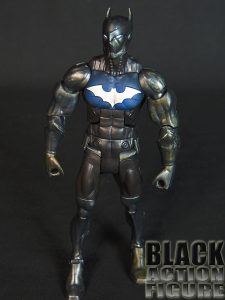 It was way back in 2011 (six years can be a long time for some people) when Batman in the comic books established a worldwide network of Batman-like superheroes he affectionately dubbed Batman, Inc.  When DC switched over to their New 52 imprint, they introduced a new member of Batman, Inc., the “Batman of Africa” named Batwing.

The original Batwing, an African man named David Zavimbe, was largely unfamiliar and did not connect well with the audience. He eventually quit the team and Batman gave the title over to Luke Fox, the son of his trusted Wayne Enterprises CEO, Lucius Fox. Luke Fox was more identifiable with the core audience and has gone on to play the role of Batwing well over the years.

I say all that to say that I’ve been waiting for Mattel or DC Collectibles to produce a Batwing figure for 6+ years. It feels like we get every insignificant character in the DCU, but a major character in the Batman universe. The comic book almost lasted 3 years and Batwing has played a role in the animated universe (“Bad Blood”) and the current DC Rebirth universe. It feels like they sat on this figure forever. That means it should be perfect, right? Let’s check out the review… 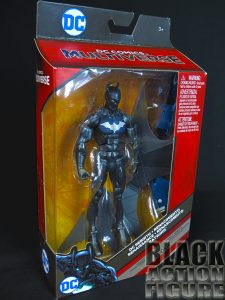 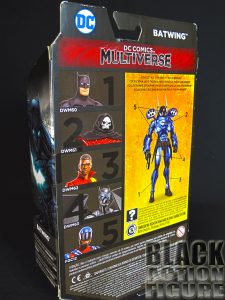 To be completely honest, I really don’t like Mattel’s packaging. To me it’s function with no form. It delivers the figure to me, but ultimately does not look all that great.

I actually had to go back and see what I scored the previous packaging from other Mattel DC Multiverse figures, and it doesn’t surprise me that the last few have been 6/10. Hasbro differentiates their packaging enough that I can walk down a toy aisle and almost know how many different waves are sitting there. All of Mattel’s waves look exactly the same. It almost feels like you’re forced to go check on them.

Case in point, I was looking for a Justice League movie Cyborg (which will be reviewed later) and I almost missed it because the Justice League packaging looks exactly like the other pegwarmers that have been there for the better part of the year (mostly Suicide Squad leftovers).

I wish whoever works in the design department over at Mattel catches a clue and make these exciting and more noticeable again. You never know how many sales they are missing out on because of this boring design. 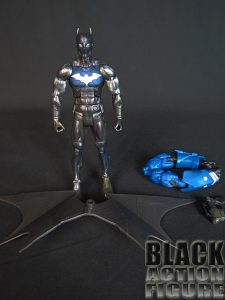 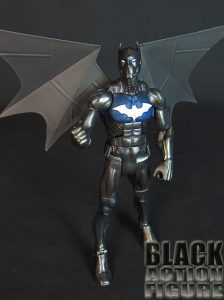 Not counting the Collect & Connect pieces that come with the figure (for the “Rookie” Bat-Mech), all you get with the Batwing figure are a set of wings. That’s it. No Bat-accessories, or set pieces or whatever. Just the wings.

This figure could have actually stood to have an extra helmet-less head of Luke Fox. It also needed another set of hands, since the only hands that come with it are the “object-holding” hands…which is ironic since they did not include any other accessory for this figure to hold. At the very least, we could have had a “punch” hand or an open palm hand. This just made the figure feel very 1990’s and reminds me of the old Toy-Biz days.

The wings themselves look nice, but would have been better if they had some articulation and not just be one big piece of plastic. A nice feature would have been if they folded up somehow and stayed on his back. I do like them when placed on the figures back and it gives credence the the character’s “Batwing” name. 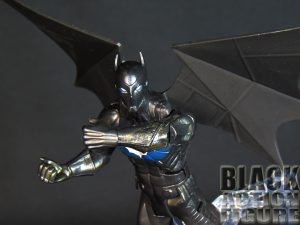 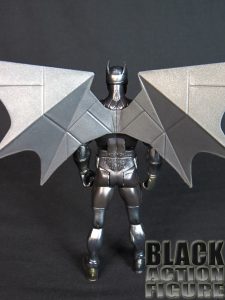 I’m a little divided on this one. There are many nice things about the sculpting and paint while there is such a generic feel to it all.

The paint itself is pretty good. While I thought it was just a Black painted figure, Mattel nicely highlighted the Bat symbol on the figure’s chest to make it seem like it glowed. And if you noticed from the pictures, it does look like it glows (along with the figure’s eyes which have the same accent), but it looks just plain gray while holding it in my hands. Great trick using paints. I also like the fact that the Bat symbol is sculpted, and not just painted.

The detail on the suit and wings almost mirrors the comic book exactly.  I do like the look of the figure overall since it so closely matches the Batwing in the book.

The figure starts to go downhill for me when you turn it around and see the big “Made in China” and legalese printed across his butt. I’m not sure why they didn’t do this on the inside leg like other figures, but it ruins it for me.

There are also parts of the sculpting which interferes with the articulation which I’ll talk about in the next section. seems like they could have made better functionality choice there.

I’ve already talked about the hands, but I’m also bothered by the feet on this figure. They are so large (most likely to be able to balance when the wings are on him), they are almost laughable.

Pluses on the paint application and detail of the suit, and minuses for almost everything else. 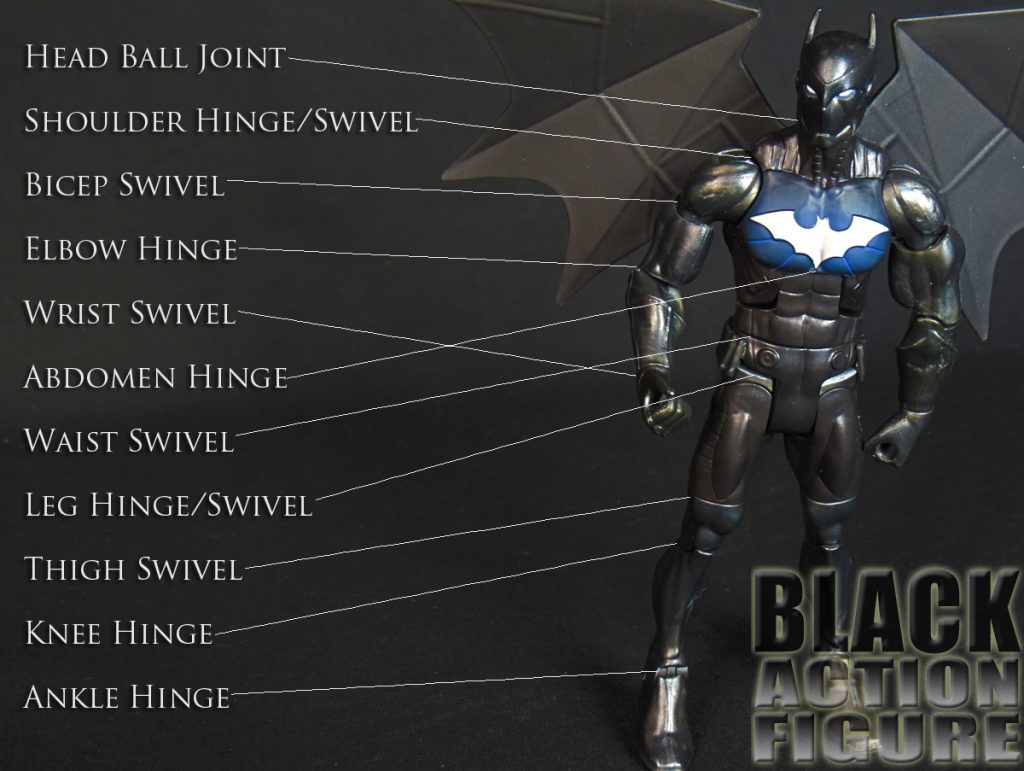 This figure clocks in at about 23+ points of articulation, which of course is just okay when comparing it to it’s comparable peers like Hasbro Marvel Legends or DC Collectibles DC Icons which gets almost to 30 POA.

Easily noticeably missing are double-jointed elbows and knees, which is no excuse for a figure in this day and age. There is also some design issues that will not allow the one hinge in the knees to bend correctly. There is also a hinge on the ankles, but again the design does not allow the ankles any range of motion.

The head/neck can look down okay, but barely looks in the up direction…a huge offense especially for “flying” characters.

Very weak articulation-wise for me. Hasbro has recognized the fact that adult collectors like articulation and Mattel used to realize that too…but they have certainly fallen to the wayside lately in this department. 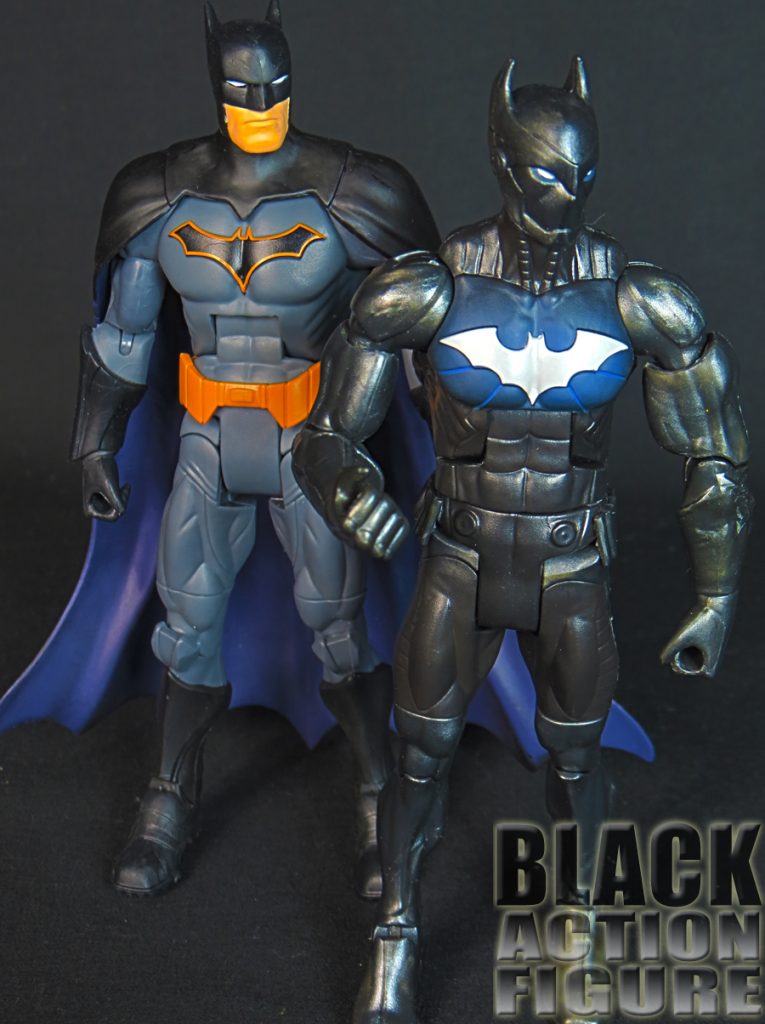 I was actually pretty excited for this one, and of course when my expectations are this high, the reality sometimes hits hard below the belt.

The good thing about this figure though is that it could be the precursor to more …and hopefully better…Batwing figures. I’m looking at DC Collectibles and Mezco to gauge the interest of this figure and hopefully come out with a better figure down the line. Don’t get me wrong, along with the wings, this figure will look great on my shelf. Hopefully, this will give others the time to come out with more suitable models.

I’m hoping his popularity rises to the point where the character can get his own title again. It took Deadpool 25 years and several volumes of his comic before finding his niche….let’s hope this happens a little sooner 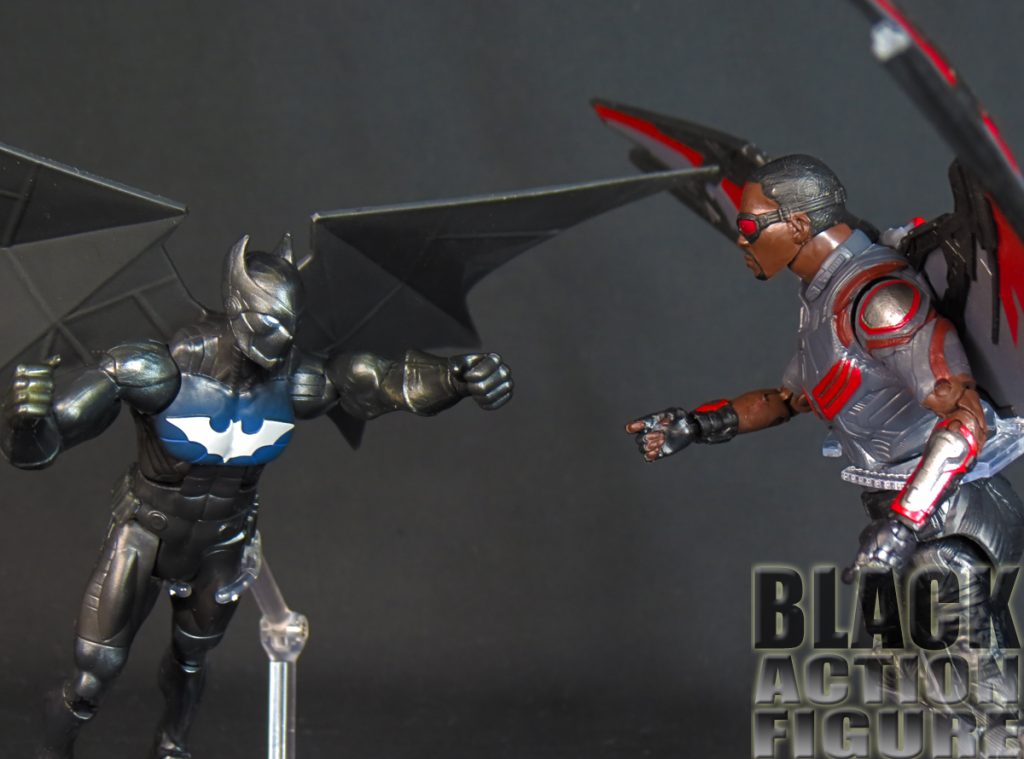