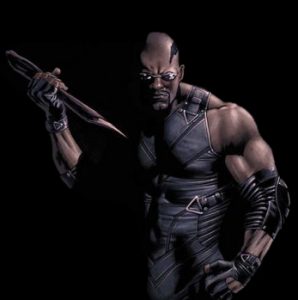 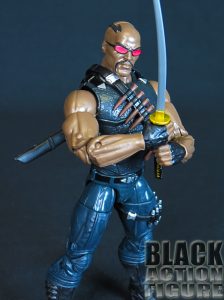 It has been five years since the last announcement of a Marvel Legends Blade…five! It was supposed to happen at a time when Hasbro was doing those crappy shipment “repacks”…which bit everyone in the ass because we missed out on several figures from Hasbro with them not following through on their repack/shipping schedule. 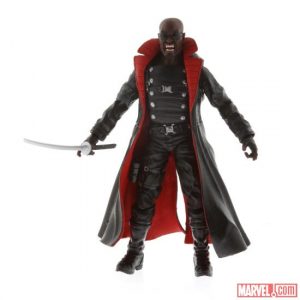 Many were not surprised when a Blade showed up in the then highly successful Hasbro 4″ Marvel Universe line. The character still had some hype behind it from Wesley Snipes’ portrayal in the movies. Blade even held a moderate following from the comic books.  When Hasbro brought the 6″ Marvel Legends line back, we knew a 6″ Blade action figure would be soon to follow.

The 6″ Marvel Legends Blade action figure that was supposed to be released back then was probably subpar at best, but it was the best (and only) Blade figure that most people would be able to get. We were pretty excited and ultimately let down when Hasbro decided not to release the figure.

Fast forward to today and we finally get our release of a more modern Blade figure in the Marvel Legends line. How does this one compare? Let’s check out the review… 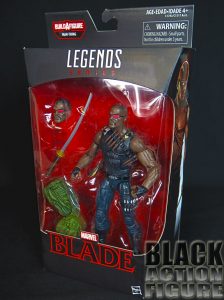 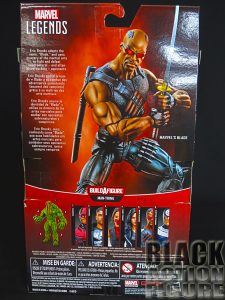 The packaging is the standard for a Marvel Legends figure. On the front, we do get a nice picture window of the figure with the figure’s name prominently displayed along the bottom.

The sides feature a nice drawing of the modern-day Blade character. On the back, we get a nice posed shot of the figure itself and the a shot of the other figures in this Marvel Legends-Man Thing Build-A-Figure line. To note, this line features several characters from Netflix’s Marvel shows (Daredevil, Punisher, Elektra and Jessica Jones), but noticeably absent is Luke Cage. Could this Blade figure actually be a stand-in until the inevitable second wave of Marvel “Netflix” figures featuring a Luke Cage and an Iron Fist? Time will tell… 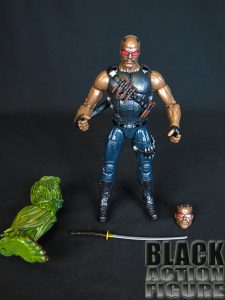 Sliding the plastic tray out of the box, I was ultimately disappointed. While the last Blade advertised several different weapons coming with it, this one simply had one…Blade’s signature sword. What we didn’t get was several weapons like the last Blade figure was promised to have including a grenade launcher, shotgun, and handgun all configured to fight the supernatural and the undead. This figure should have been loaded down with accessories like Hasbro did with Deadpool and the Punisher.

Instead, all we get with this figure is a sword, an extra head, a Build-a-Figure piece, and a sheath and belt  on the figure. Not much to do with this really. The sword is also made of that rubbery material which you most likely won’t get hurt on, but it refuses to hold a natural, straight, sword shape.

While the extra head is nice, I would have preferred more weapons.  And while there are stakes on his belts, it would have been nice is maybe one could come out and fit into the figure’s hand. As it is now, that is not an option. 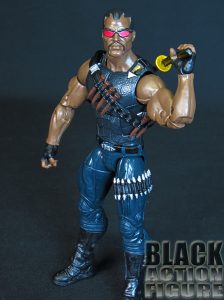 Like the last Blade (you know, the one that was supposed to come out), this figure re-uses some sculpts on the body that already exists. As a Facebook fan pointed out, the legs are reused from the Amazing Spider-Man 2 movie Electro figure and the arms are also reused from somewhere.

The two heads and the stake belts are original, but the sword itself is a repaint of the sword that comes with the Deadpool figure. So as original as this figure should feel, it ultimately does not.

The two heads, while not necessary, do feature the two different recent looks for Blade. Again, noticeably absent are any hint of fangs on either head. Even the 4″ Marvel Legends Blade bared his fangs…No way to tell that Blade is actually a vampire at all unless you told someone “hey, that’s Blade, the daywalking vampire.”

The paint application is good…No splotches or uneven application. No cockeyed figures thanks to both heads wearing permanent sunglasses.

Hasbro really missed the mark…they wanted to get the Blade figure into people’s hands, but then offer this substandard version of him. Let’s hope this figure only leaves room for maybe a better Blade figure down the line. 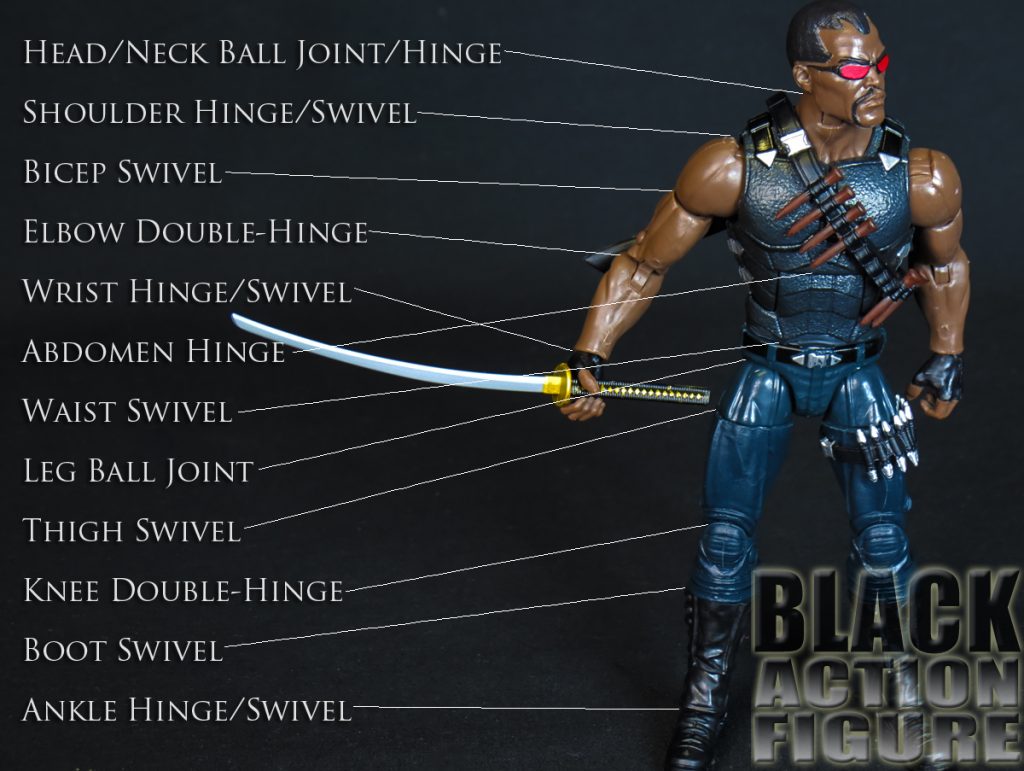 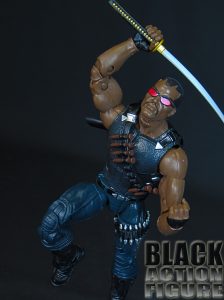 Nothing to complain about in this department…with 30+ points of articulation, Hasbro has made an otherwise blah figure very poseable.

Nothing more to mention. I do wish this was again a better designed figure…sometimes the design makes for better poses…like maybe a screaming mouth with full fangs…. 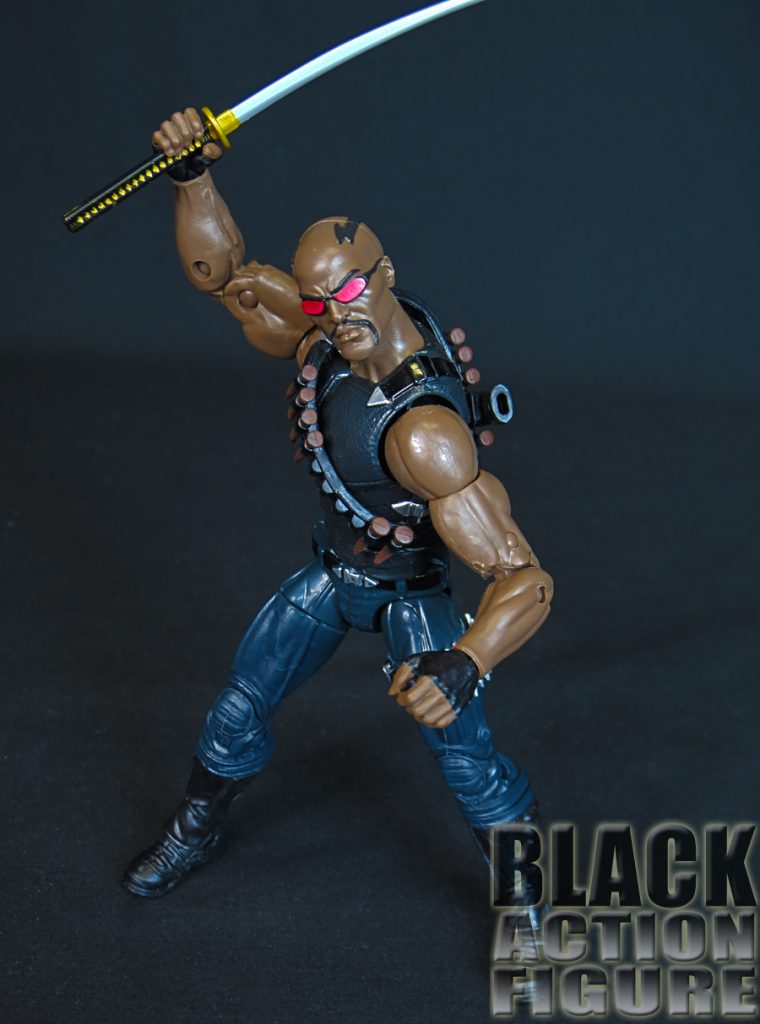 I’m not going to lie…I was all in on this figure. This was supposed to be the Blade figure that we deserved…unfortunately, there are just enough things missing to make this kind of “meh” to me.

Take note though…this one is going to go fast. At only one packed in per box, these are sure to be in short supply for the time being. Yes, they may end up on the Ross shelf for $5.99 in six months, but if you want to enjoy it before then, definitely take time to look for it.  It has been popping up in retail lately (my Walmart had it in stock) or online…if you’re willing to pay that online price.

Will it be worth the price? Let me know in your comments below…