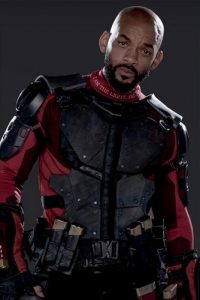 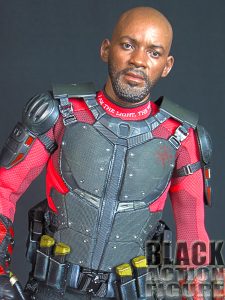 It seemed like it took me forever to get to this one, and well, it did. I went back and took extra pictures (yet somehow still forgot a back shot which now I’m like “eff it”). I sat on the review for a good week to think about what I was going to say. I wanted to make sure that I was in depth on this one.

So was it worth the wait? Hell yeah it was…check out the review… 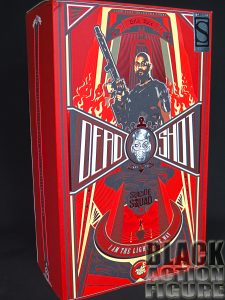 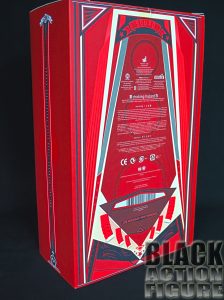 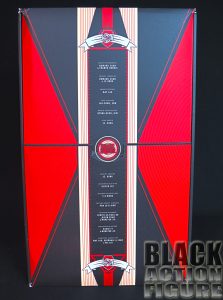 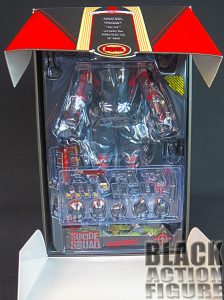 I know I have complained a lot about the packaging of some of the more recent Hot Toys figures, and it was well deserved. I remember when I first got into Hot Toys figures and realized that the packaging was part of the whole experience. But then they seemed to have gotten lazy and unimaginative. I was so unimpressed with the “Guardians of the Galaxy” and the “Captain America: Civil War” packaging. I had started to give up even expecting anything fun and exciting that made me take my time opening the package.

Well, it seems that Hot Toys has regained some of that magic with this figure. From the time I opened the plain, brown, cardboard box and slid the box out of its plastic bag, I actually loved every minute of it. The design on the box was fun and imaginative, and reminiscent of an old-timey carnival (which was also the partial style they used in the movie). Every bit of the outside design made the anticipation high for me.

I was not disappointed when I slid the cover off and was met with an inner cover that interlocked in the middle. When was the last time Hot Toys did something fun like this? I will admit that this is my first and only Suicide Squad Hot Toys figure so this may be old news for people who purchased a Harley Quinn or a SS Joker, but I definitely felt like that some of the fun was back when opening this premium figure.

After unlocking the inner cover, I am then blown away at the sight of not just the figure, but the ton of accessories included with it…just like a Hot Toys figure should be. I’m sorry if I have ruined this for those who are looking to purchase, but you will not be disappointed and I hope that you retain an ounce of the excitement that I have opening this figure. My only disappointment is that one of the corners was dented, making the box less than mint…something that I quickly dismissed as I opened my new figure… 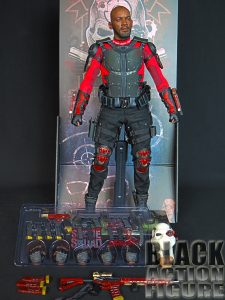 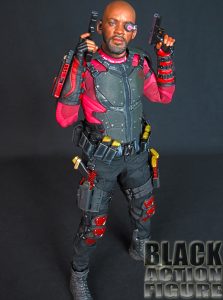 First off, unlike the Art Figures’ knockoff 1/6th scale figure, Hot Toys has graciously given us a figure with all of the armor already attached. And of course, there is also a set of instructions so there is no guessing game as to what goes where.

Of course, the movie-accurate armor counts as an accessory (or a series of accessories) so we’re already doing more than good there. I have to take note that the figure’s arm pistols are of course very accurate…with the Art Figures’ KO, I received two of the same wrist weapon so one of them is wrong. I want to take note that the magazine holders are securely strapped to the figure’s belt. If you look at the Art Figures’ KO cross-eyed, the magazine holders fall off…very shoddy design.

Counting off the rest of the accessories, a rifle, his main handgun, two back-holstered handguns (all with removable magazines), three extra rifle magazines, four extra handgun magazines for his main handgun, four extra magazines for his two back-holstered handguns, five extra hands, knife, extra masked head, an eye scope for the unmasked head, a figure stand (with a beat up stop sign as part of the deco), AND a backdrop! Needless to say, this is one of the most “accessoried” Hot Toys figure that I’ve received in a while…and I’m loving it! (BTW, I know I’m missing one or two things from this list…most notably a D-Link ring that hooks onto the back…)

One thing to note about the extra head – this is a full extra head, unlike the mask that the Art Figures KO came with (which scratched up the unmasked head by the way). While I appreciate the extra head, I do have to say that it was difficult putting it on without the collar of the figures’ shirt getting caught by the thicker neck of the extra head. A pair of tweezers helped pull the collar up, but it felt cumbersome…but it is something to overlook. And while the backdrop is nice, the connecting piece that did not connect well quickly began to deteriorate from multiple tries of trying to put it together. 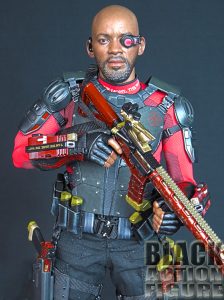 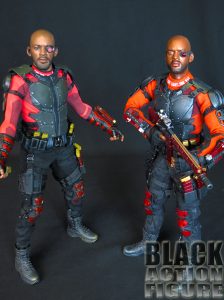 Out of all of my 1/6th scale Will Smith figures (“Independence Day”, “I am Legend”, now multiple “Suicide Squad” characters), this one is hands down and easily the most accurate Will Smith figure that I have in my collection. Squinting and looking at him sideways is not necessary. This is Will Smith from every angle.

I look back at the Art Figures KO (seen at the right) and having the two together is no comparison. The Art Figures KO looks like a Madame Tussaud’s wax dummy replica of the lifelike Hot Toys figure. You can see it in the more natural skin tone (and more lifelike plastic used). I even notice the eyes on the Hot Toys figure…which is an actual glass (plastic?) ball placed inside the head to simulate an eyeball. The other figure? Its eyes are painted on.

The overall outfit is straight from the movie. I would have to say that the Art Figures people had to guess on a lot of the detail from promo pictures and while they got a lot of it right, some of the colors are off.

The head sculpt and paint is eerily too lifelike, which makes it so good. My only complaint would have to be the dead eyes/stare on “Deadshot”. There needs to be some more emotion in his face. Maybe if there was a smirk or some other emotional play in the face, this would be an easy “10 out of 10,” but with that look, I will have to knock him down a score. Otherwise a near perfect Will Smith figure…that I hope he has in his hands now and can appreciate it. Will Smith does not have as many licensed figures bearing his likeness out there (well, at least not as many as Samuel Jackson) so to see this near-accurate likeness may freak him out a little. 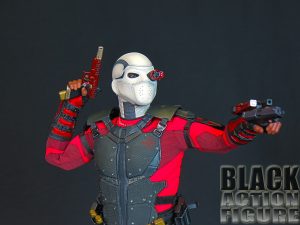 I refrained this time from doing a Articulation pic. I was actually in the middle of doing it when I realized that A) most of the articulation is covered up and B) its a Hot Toys figure…let’s just say that it’s in the 30+ points of articulation range.

The armor, of course, hinders a lot of the articulation. While I know a waist swivel exists, the figure can barely twist its waist due to the loaded utility belt. I can name other issues, but what it comes down to is whether you would like a kick-ass armored replica, or a figure that can twist its waist properly or bend its knee. I know which one I want.

That just leaves the score…what should I give a figure that I won’t be posing into a lot of cool-ass poses? There is definitely a big drop in score due to limited articulation issues. 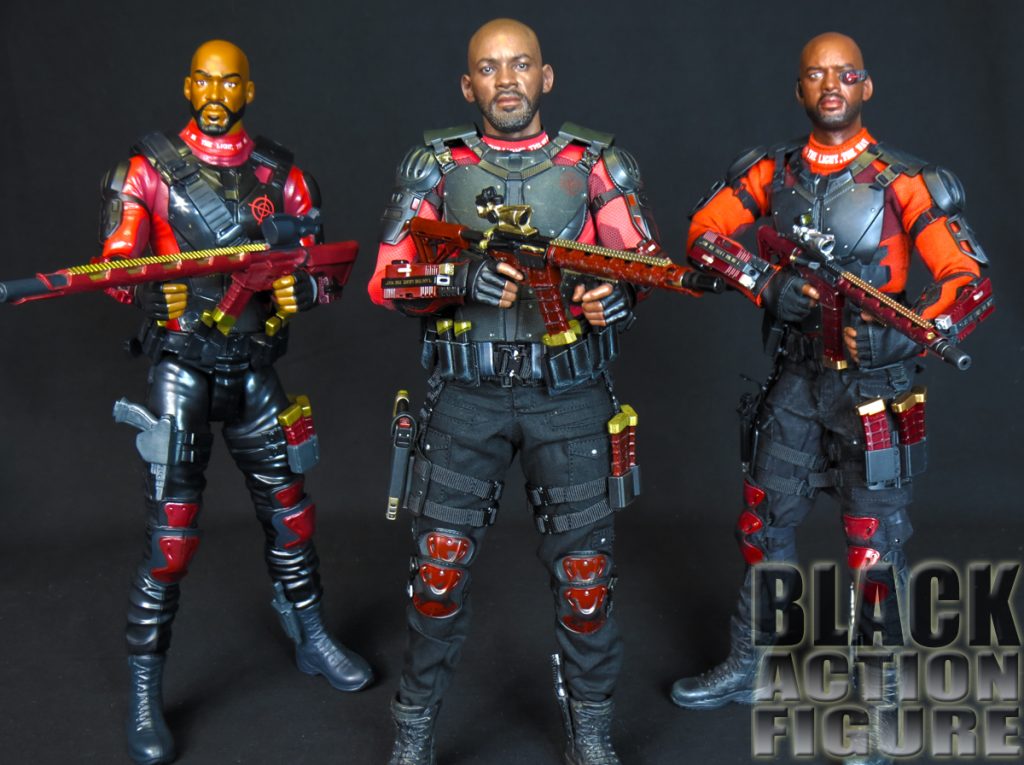 I think…I hope…after I get the Medicom MAFEX version of Deadshot that I will finally be done buying Deadshots for a while…at least until the inevitable sequel comes out.

With this figure, I have gotten my near perfect Deadshot figure. There will be no more complaining about Deadshot in the 12″ scale…

Just to mention, I also have a 3.75″ Deadshot figure from Funko, but I refuse to open that one for various reasons…

So for now, I think it’s time to move on. With this FIFTH Deadshot review (with one more possible on the way) it is time for me to diversify again and pick figures that have not received a lot of attention. (Trust me, I have a lot of them).

What did you think about this Hot Toys figure? Did you like it as much as I did? Sound off in the comments section below…